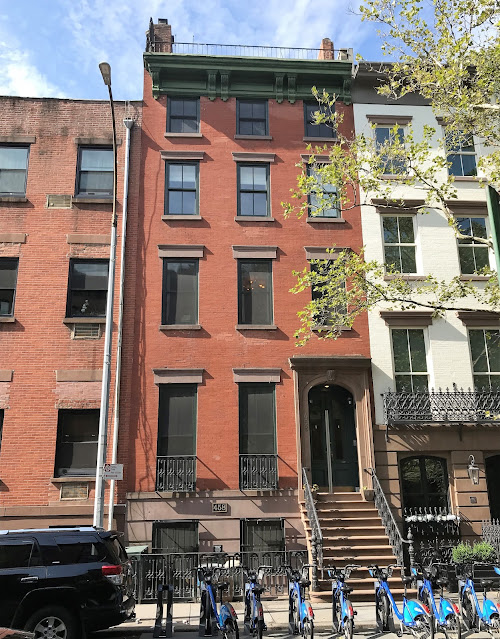 Born in Cortland, New York on March 27, 1807, Joseph Sollace Bosworth was the valedictorian of his 1827 Hamilton College class.  In 1833, three years after he was admitted to the bar, he married Francis Eliza Pumpelly.  The couple relocated to New York City in 1836.  His career skyrocketed.  In 1844 he was elected a member of the State Assembly, and in 1851 elected judge of the New York City Superior Court.
The Bosworths erected a home in the Chelsea district in 1854.  Faced in orange-red brick, the Italianate style residence rose four stories above a brownstone basement level.  The double-doored entrance was fully framed in stone and capped by a molded cornice.  The floor-to-ceiling parlor windows very likely were fronted by a cast iron balcony.  A pressed metal cornice with paired brackets crowned the three-bay wide home.
Joseph and Francis had 11 children, ranging in age from Annie, who was 17, to Frances Howard, how was one year old when the house was completed.  (A twelfth child, Frances A., was born in 1834, but died in infancy.) 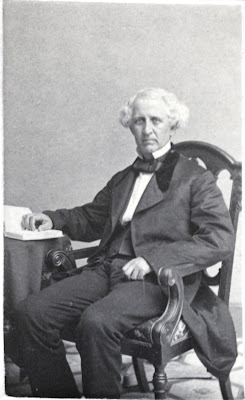 Judge Joseph S. Bosworth.  image via the Century Association Archives Foundation
Judge Bosworth's civic activities went beyond the bench.  He was one of the Executive Committee that erected the Free Academy Building, selected the faculty, and organized the institution; was on the Board of Managers of the Magdalen Benevolent Society, a home for indigent women; and was a member of the Board of Education.
In 1858 Bosworth was made Chief Justice of the New York City Supreme Court.  His responsibilities were increased in 1864 when he was made a Police Commissioner, and in 1868 made president of the board of the Police Department.
Several of the Bosworth sons attended Columbia Law School.  Both Frederick and Frances were enrolled in 1871, Frederick as a senior and his brother a sophomore.  Tragedy struck the family that year.
On July 30, 1871 the New York Dispatch reported that Frederick's funeral had taken place in the West 22nd Street house the previous day.  The article called him "a remarkably brilliant young man," saying, "He had nearly completed the study of the law."
When servants decided to leave on amicable terms in the 19th century, it was common for the family to allow them to have prospective employers interview them at the house (in the basement level, of course) at prescribed times and, most often, for only one or two days.  The practice proved disastrous for the Bosworths in one instance.  The New York Herald reported on November 27, 1874, that Bridget, one of the Bosworth's maids, "having determined to leave, advertised for a place.  The day the notice appeared a man called at the Judge's house to see the girl, and having agreed to take her requested that she would go up stairs and get a certificate of character from some of the ladies of the house."
Bridget did so, but when she returned to the basement with Frances's recommendation, the man, who had identified himself as Frederick Nichol, was gone.  And so was $600 worth of silver.  It was a significant haul, worth around $14,700 today's money.
Bridget gave a detailed description to the police.  Two weeks later Detective Henry Avery noticed a man in Washington Square who fit the description.  "On arresting him and taking him to headquarters he was found to have on a suit of clothes stolen from a Mr. Fox, of No. 94 East Ninth Street," said the New York Herald.  The man's name was Frederick Nichol.  Although the thief was caught, the Bosworth silver was no doubt long gone.
The Bosworth's daughter Josephine had married Brigadier General Charles Yates, who had distinguished himself in the Civil War.  Following his death in September 1870, Josephine returned to the West 22nd Street house, bringing her two daughters, Stella and Frances along.
Bosworth stepped down from the bench in 1872, continuing his private law practice.  When Frances Pumpelly Bosworth died in 1879, Joseph Jr. and Francis were attorneys working in their father's law firm.  Both were still living at 458 West 22nd Street, as well.
The esteem with which former Judge Bosworth was held was evidenced in a surprise party for his 76th birthday on March 28, 1883.  The event was worthy of a booklet titled, "Account of a Surprise Party Which Called on Ex-Judge Joseph S. Bosworth At His House, in the City of New York, on the Evening of March 28, 1883."  The scheme, concocted by Assistant United States Treasurer Thomas C. Acton and attorney Aaron J. Vanderpoel, relied on co-conspirators within the Bosworth household.  A "son and daughter," the latter presumably Francis, arranged to sneak a society caterer, food for a banquet, and staff into the basement, and to distract their father in his upstairs study.
The distinguished gentlemen arrived "in omnibuses and carriages...taking care to stop a few doors short, that his suspicions might not be aroused," said the booklet.  Quietly they filled the parlors, and when Bosworth "was induced, by stratagem, to come down from his sitting-room above, his amazement was complete."  The New York Times remarked that the parlor level was filled with "distinguished judges, lawyers, bankers, doctors and other citizens."
The following year, on May 14, Bosworth presided at a meeting of the New York Bar "held to take cognizance of the death of Charles O'Connor," as reported by the Hamilton Literary Monthly.  He caught a cold that evening, and was unable to go to his office the next morning.  The following day, according to The New York Times, "pneumonia developed, and Mr. Bosworth was too old to rally against the attack."  He died on May 21 at the age of 77.   Possibly because of the large number of attendees expected, the funeral was not held in the 22nd Street house, but at the Madison Square Presbyterian Church.
Of his 12 children, four sons and two daughters survived him.  Still living in the West 22nd Street household were Josephine and her daughters; Stella Louise, her husband George Carlton Lee, and their two daughters, Adelia M. and Josephine Bosworth Lee; and George B. Bosworth.
The bulk of Bosworth's estate was divided among his children.  Francis and Joseph Jr. received his law library, and daughter Mary, the widow of John G. Saxe inherited the family piano.  The New York Times reported that "the testator directs that his daughters, Mrs. Josephine B. Yates and Mrs. Stella Lee, be permitted to retain the use of the family residence and furniture."
Josephine's daughter, Stella Yates, was married to Guert Gansevoort Jackson in Calvary Episcopal Church on October 20, 1886.  The "wedding supper" served by society caterer Clark was held in the 22nd Street house afterward.  The New York Times noted, "Only the family were present."
Josephine Yates died at 458 West 22nd Street on May 3, 1902 at the age of 63.   Just five months later, on October 23, an advertisement appeared in The New York Times that read:

The price would equal about $536,000 today.
It was sold that month to Michael A. C. Levy, who quickly resold it in March 1903 to Sarah H. Thomas.  She leased it to various private families for years.  Then, on July 30, 1918 The Sun reported that she had leased it to Frank Earle, "who intends to make extensive alterations."  The changes were on the interior, and likely included updated plumbing and electricity.
By 1920 rooms were being let in the house.  And not all the tenants were upstanding.  On November 13, 1920 20-year-old Peter Clover was arrested after he and two other men broke into Schwartz Bros. fur shop on West 29th Street.  And on August 17, 1928, Joseph Southard and two accomplices held up Maloney's restaurant on Eighth Avenue.  The 22-year-old explained in court, "I'm in love with a sweet little girl, and I thought I'd just pull one stick-up so I could furnish a flat."  Touching as his love story was, Magistrate Macreary was unmoved.  He was held without bail. 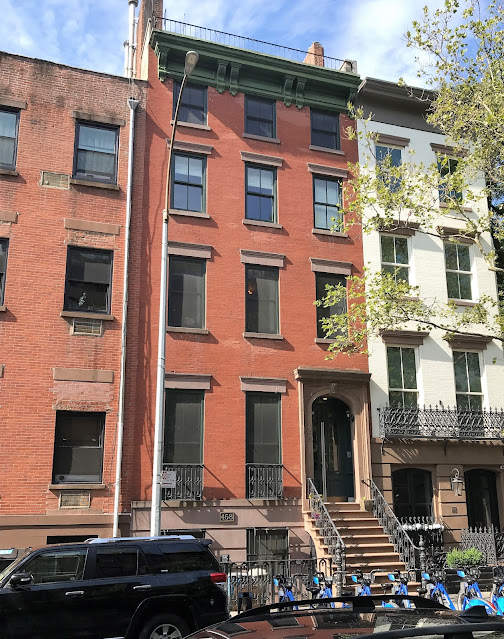