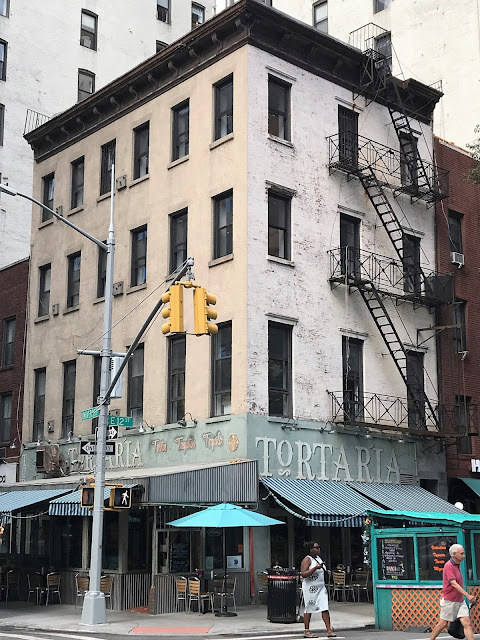 In 1855 Dr. Oliver Hastings Wellington moved into the newly completed house at the southwest corner of East 12th Street and University Place.  At 27-feet-wide and three stories tall above the English basement, the Italianate style home reflected its enviable location just two blocks from fashionable Union Square.  Its corner location allowed for extra light and ventilation along the 40-foot long University Place elevation--a special amenity.
Born in Lexington, Massachusetts on August 19, 1813, Wellington had married Charlotte Augusta Kent in 1838.  The couple had three sons and two daughters, ranging in age from one year to 13 when they moved in.
Despite their large family and live-in servants, the Wellington's took in a boarder.  At advertisement on December 12, 1855 offered:

Board--At 32 East Twelfth Street, corner of University place, one block from Broadway.  A choice of rooms at different prices.  Fifth avenue stages pass the door.  Dinner at one o'clock.

Wellington converted a portion of the basement level for his Water Cure Establishment.  At the time, the "water cure" was sweeping the country.  a precursor to today's hydrotherapy, it was considered more spiritual and natural than contemporary medicine.  Practitioners believed that water (the major component of the body) would enter wounds and imperfections in the skin and flush out impurities.  This was done by various methods--"plunging baths," "sitting baths," and "head baths" among them.  Only cold water was used.
In the spring of 1855 Emma Augusta Cunningham visited the doctor, concerned about her daughter's health.  She brought her daughter in for treatments several times.  The doctor-patient relationship ended several months later when Wellington visited Mrs. Cunningham at 31 Bond Street, where she was housekeeper, in an unsuccessful attempt to procure his fees. 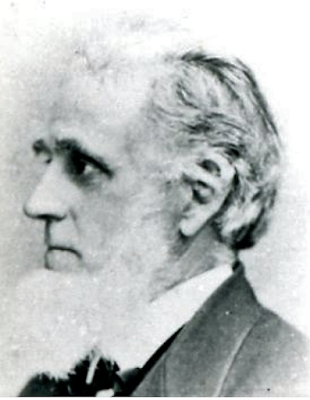 Dr. Oliver Hastings Wellington (original source unknown)
Two years later Dr. Wellington found himself on the witness stand in one of the most publicized murder cases in New York history.  Emma Augusta Cunningham was accused of the brutal murder of her employer, Dr. Harvey Burdell.  Somewhat strangely, from the very start Wellington was a contentious witness.  On February 6, 1857, the New York Herald quoted the back-and-forth between Wellington and the coroner:

Dr. Wellington and his family moved to Massachusetts in 1858.  The house was purchased by Jacob S. Story, who ran a fish market nearby at 56 University Place.  He and his wife, Maria, had three children, Caroline, Mary Elizabeth Ester, and Jacob Jr.  Living with the family was Jacob's father, Benjamin, a veteran of the War of 1812.
Story owned considerable New York City real estate, as well.  But the family's wealth could not protect them from repeated tragedy and heartbreak while living in the East 12th Street house.   The family traveled to Charleston, South Carolina in the winter of 1858.  They were staying at the Mills' Hotel on March 6, when Caroline died.  Her body had to be transported back to New York for her funeral.
Two years later, on May 28, 1860, Mary Elizabeth Ester, the "only remaining daughter of Jacob and Maria Story," as worded by the New York Herald, died.  She would have been six years old in two months.  Her funeral was held in the parlor of 32 East 12th Street four days later.
Jacob Jr. was married to Louisa T. Knapp in the Washington Square Methodist Episcopal Church on November 10, 1863.  Jacob brought his bride back to his parents house to live.  The family's joy turned to sorrow 12 days later when yet another funeral had to be planned.  Benjamin Story died on November 22 at the age of 84.
Jacob S. Story died around 1869.  His son took over the business, continuing to run it at 56 University Place until 1874.  That year he converted the basement level of 32 East 12th Street to a store and moved the oyster and fish market into the space.  While he retained possession of the property, he moved his family to 73 Seventh Avenue.  As was common, an auction of the household goods and furnishings was held on October 16.  Listed among the items were "one elegant rosewood satin brocatel Parlor Suit, two marble top Tables," a rosewood etagere and black walnut bedroom suites.
Story rented the house to Maria Crosset, a dressmaker who took in one boarder at a time.  The best of society dressmakers
often accrued significant personal fortunes, so Crosset's ability to afford the spacious home (albeit sitting above a fish store) was not surprising.  Her boarder in 1876 and 1877 was Henry Vellely, an engineer.  In 1879 and 1880 William H. Becker, who listed himself as "speculator," rented rooms.
Things had declined at the corner of University Place and East 12th Street in the 1890s.  The former fish store was now Isaac Boehm's saloon, and he operated the upper floors as a "hotel"(more accurately a rooming house).  Living there in 1896 was 25-year-old Charles Smith, who was arrested on May 19 "on the charge of highway robbery," according to The Sun.
In court that morning, Alice Murnane pointed at Smith and declared, "He is a highwayman, Your Honor."  She testified that her husband was away, and that at 1:00 a.m. she went out to a drugstore to get something to treat a toothache.  The Sun reported, "While walking through Twenty-fourth street, near Lexington avenue, she was accosted by Smith, who demanded what she was doing in the street at that hour."
According to Mrs. Murnane, he grabbed her arm.  "Let me go, sir.  How dare you," she demanded.  "With that he grabbed my pocketbook, containing $2, from my hand and ran.  I ran after him, crying 'Stop thief!'  He was about to jump on a cable car when a policeman caught him."
Not surprisingly, Smith's story was much different.  He said he had met the woman on Lexington Avenue and she "asked him to go home with her."  The judge held him on $1,000 bail, a significant $33,000 in today's money.
In 1901 Isaac Boehm sold his saloon and hotel to Sabath & Brown.  As was often the case, they had a contract with Bernhaim & Schwartz to sell only that brewery's products.  The new owners did nothing to improve the reputation of the building.  On July 21, 1905 The Daily Argus reported that Seymour Sabath had been arrested not only for "having his bar-room open on Sunday," but for "conducting a disorderly house."  It was the polite turn-0f-the-century term for a brothel.
The following year the saloon was gone, replaced by the office of the Middleboro Realty Company.  The upper floors continued to be operated as a rooming house (a much more respectable one).   The store was home to the coat firm J. Bertstein & Co., run by Jesse Bernstein and Isidore Edelhertz at the end of the World War I. 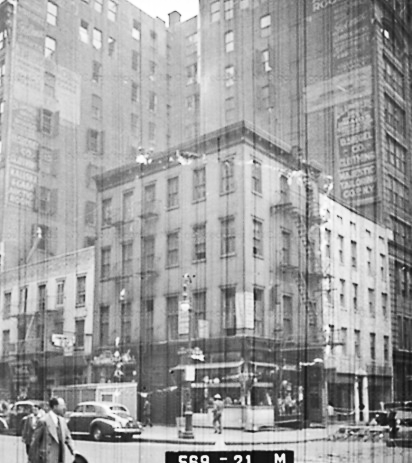 In 1941 the stoop had been removed and fire escapes ran up both elevations.  via the NYC Dept of Records & Information Services.
On June 22, 1949 the Madden Studios opened in the former residence, run by composer and dancer Charles Madden.   The New York Age reported, "Instructing classes in Primitive Dance are Lavinia Williams, formerly of the Katherine Dunham Dancers, and James Hunt, former member of the Dunham Experimental Group and 'Show Boat.'"  Teaching Primitive Percussion, said the article, would be Madden, "who has appeared in concert with Pearl Primus Dancers and the Dunham Group, as well as with the East Indian dancers Sujata and Osaka."
The changing neighborhood was reflected in the Kentshire Galleries occupying the ground floor space during the 1980's. In October 1985 it staged a showing of 19th century Indian antiques and artworks.  On October 27 The New York Times commented, "The show covers material dating mostly from 1800 to 1870." 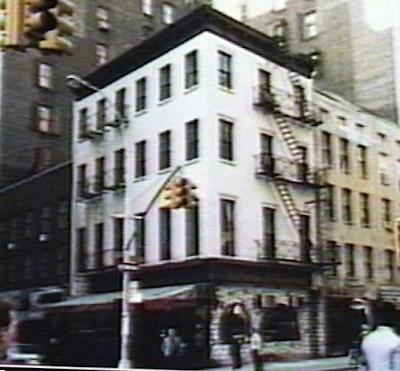 1991 alterations included a remake of the ground floor facade for a restaurant.  via the NYC Dept of Records & Information Services.
A renovation completed in 1991 resulted in a restaurant on the first floor, its exterior veneered in artificial stone, and one apartment each on the upper stories.  The brick was given a coat of white paint.  Since January 2012, Howard Berke's Tortaria, a Mexican restaurant, has occupied the ground floor space. 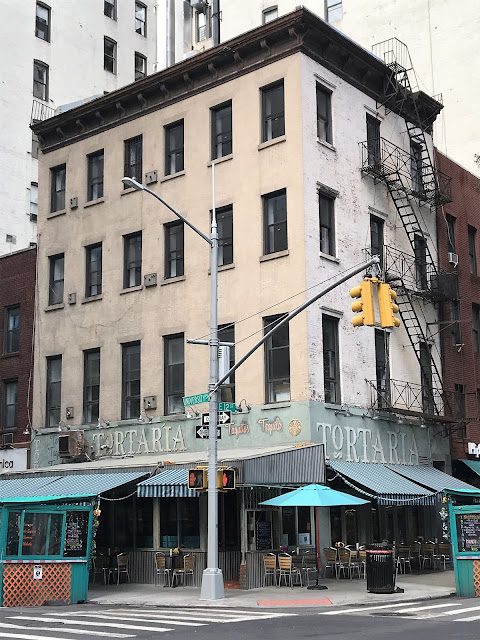