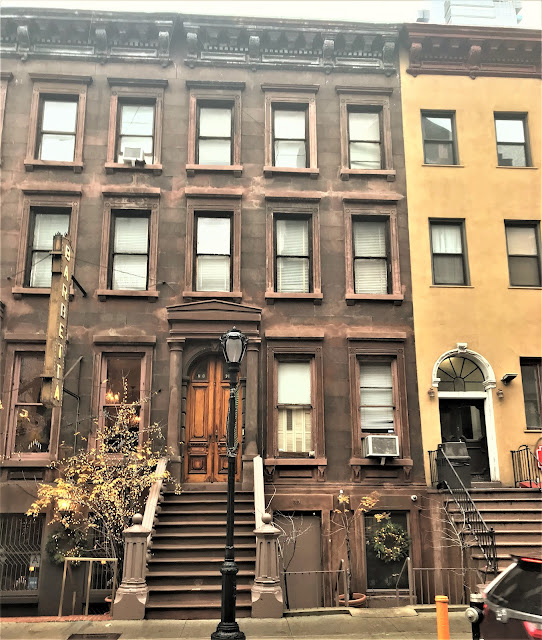 In the first years following the end of the Civil War, the West 46th Street block between Eighth and Ninth Avenues in Hell's Kitchen was anything but attractive.  One block to the east was Longacre Square, the center of the city's carriage making industry.  The industrial tenor of the district spilled over onto the West 46th Street block, and in the 1860's John Hemmer's distillery sat at 319 West 46th Street.  Hemmer was capable of producing 15 gallons of liquor per day.
The property was owned by Henry Astor III, the son of William Backhouse, Sr. and brother of John Jacob and William B. Astor, Jr.  He was estranged from his family after he married the daughter of the gardener of the Astor summer estate.  The couple lived  comfortably on an estate in West Copake, New York.  While he inherited 119 parcels of New York City real estate from his father, he was not permitted to manage it--that was done by his brothers, who had otherwise turned their backs on him.
In 1874 architect and developer James Blackhurst erected two identical homes at 319 and 321 West 46th Street.  He  designed the brownstone-fronted houses in the Italianate style, with decided neo-Grec influences.  Sitting on the site of the Hemmer distillery, 319 West 46th Street was, like its twin, three stories tall above the English basement level and 20-feet-wide.  Hefty cast iron Italianate newels and railings flanked the stone stoop.  On either side of the double-doored entrance were engaged, Doric columns that upheld a classical pediment.  The incised decorations of the architrave window frames drew from the relatively new neo-Grec style.  The house was sold subject along with the leasehold of the Astor property on which it sat. 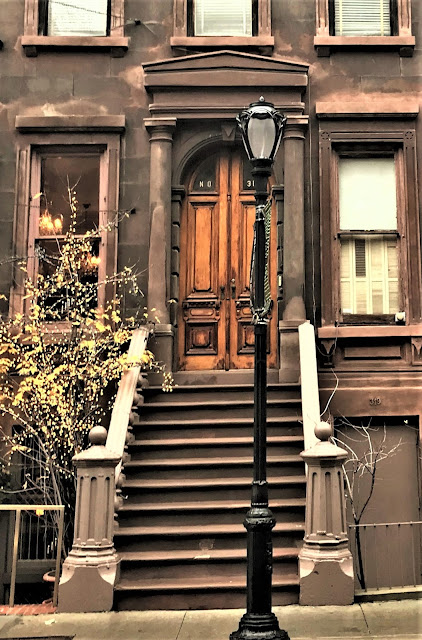 Surprisingly, not only do the original 1874 entrance doors survive, but so do the interior parlor shutters.
The new owners did not need the entire house.  An advertisement in the New York Herald on March 24, 1875 offered, "To Let--To a small family, three rooms on third floor of new brown stone house, 319 West Forty-sixth street."  Living here the following year was William Weber, whose profession was listed as "clerk."
The house was sold at auction to real estate operators James Kyle & Sons on May 18, 1892 for $6,475, or about $190,000 in 2022 terms.  It was now operated as a respectable boarding house.
Living here from about 1898 through 1904 was artist Maria Matilda Brooks.  Born in Staines, England, in 1837, she studied at the South Kensington Art School in London and the Royal Academy School.  She moved to the United States in 1883.  Her Down Piccadilly, Returning from Covent Garden Market One June Morning earned her an Honorable Mention at the 1893 World's Columbian Exposition in Chicago. 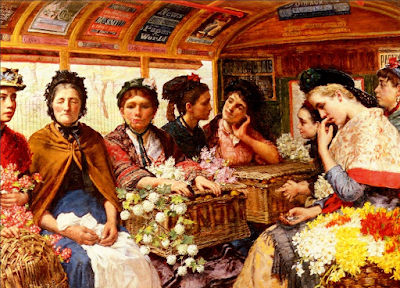 Brooks drew on her English background to create the painting exhibited in the Chicago World's Fair in 1893.
Maria Brooks continued to exhibit while living here.  In 1898 she received a bronze medal at the Crystal Palace Exhibition in London; honorable mention in the Buffalo, New York Pan-American Exposition; and a bronze medal in Charleston, South Carolina in 1903.
Maria Brooks's career came to a sudden end on November 16, 1913.  That afternoon she was crossing Broadway when she was hit by an automobile.  She died in the hospital later that evening.
Other boarders were Dr. Emmet Dinsmore, who lived here in 1896, and brothers James M. and John C. Seager.  In 1899 the Seagers partnered to incorporate the John C. Seager Company, "to conduct a general shipping agency and freighting and chartering business."
The men had earlier operated the steamship firm of Seager Brothers, which dissolved in 1883 with debts of $55,338.  They hoped, no doubt, that the new venture would enable them to erase that debt and get back on their feet.   That may have happened, were it not for one disastrous incident.
On February 13, 1901, the New York Herald reported, "John C. Seager, general agent of the Prince line, received last night this cable despatch [sic] at his home, No. 319 West Forty-sixth street:  'Spartan Prince stranded.  Straits of Gibraltar.  Passengers safely landed here.  Carrara.'"
The steamship Spartan Prince had left New York on January 29 headed to Italy.  It hit rocks that punched holes in the keel at the engine room and holds.  The New York Herald reported, "Salvage steamers set out at once, and the tug Hercules returned to-night, bringing eighty-three passengers.  No lives were lost."  Seager told a reporter, "I am in hopes that the damage may not be as serious as the despatch [sic] states."
Unfortunately for the Seager brothers, the damage was as serious as the telegram suggested.  A year later, almost to the day, on January 26, 1902, The New York Times reported that John C. Seager had filed for bankruptcy.  The wreck had wiped him out.  The article noted, "he has assets consisting of cash in the bank, $202; watch, chain and studs, $100, which he claims are exempt.  His life is insured for $20,000."  (Seager was, sadly, worth more dead than alive.)  His troubles would only increase.  He was still living at 319 West 46th Street the following year when Judge Adams of the United States District Court refused his petition of bankruptcy.
The house continued to see white collar boarders.  By 1907 Judge Edwin J. Dutton lived here.  A judge in the Court of General Sessions of Peace, he would remain for several years.  Printer Walter Cavell boarded in the house in 1910, and in 1914 Myer S. Cohn listed 319 West 46th Street as his address when he and his partners incorporated the Kings County Lumber Company, Inc.
Before the end of World War I Longacre Square was renamed Times Square.  It was now the center of the city's theater district.  In 1924 the offices of Fred E. Eckhart's theatrical business were located at 319 West 46th Street.  But greater change was on the near horizon. 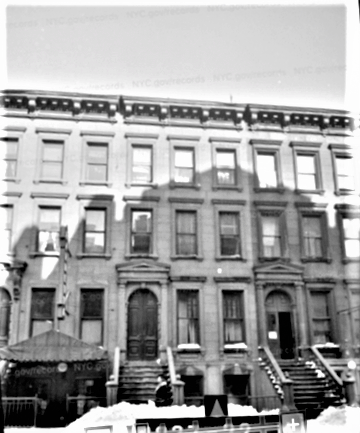 The house has changed little since this photograph was taken in 1941.  via the NYC Dept of Records & Information Services.
In 1926 renovations by architect Paul Cerrina were completed that resulted in a restaurant in the basement, and a rooming house on the upper floors.  The Department of Buildings directed, "not more than 15 sleeping rooms in building." 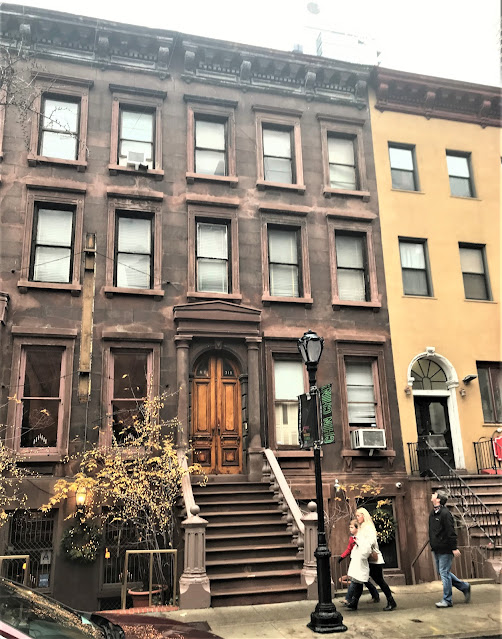 Nearly 140 years after its completion, James Blackhurst's dignified house is surprisingly well preserved along today's Restaurant Row.
photographs by the author
no permission to reuse the content of this blog has been granted to LaptrinhX.com
Posted by Tom Miller at 1:00 AM