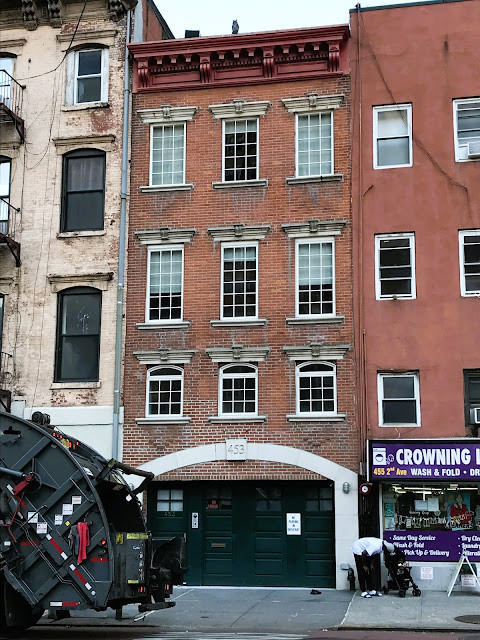 Around 1860 a three-story rowhouse was completed at 384 Second Avenue, between 25th and 26th Streets.  It exhibited the expected elements of a middle-class, Italianate style home--a brownstone stoop, molded lintels and a handsome bracketed cornice.  It sat within the immigrant-filled area known as the Gas Light District, so called because of the sprawling Manhattan Gas-Works that engulfed the block between 22nd and 23rd Streets, from First Avenue to Avenue A.
The house was briefly home to Patrick Minton, here between 1861 and 1862.  At the time, another Irishman, Thomas Brogan lived slightly south at 419 Second Avenue, and operated a butcher shop at 384 Second Avenue.  Brogan had come to America from Clones, County Monaghan.  He moved into 453 Second Avenue following Minton, and relocated his store almost directly across the street to 424 Second Avenue.
In 1863 the Draft Lottery was established to augment Union troops fighting in the South.  On September 10 the Board of Enrollment met at 271 Broadway to continue hearing applicants for exemptions.  The New York Herald reported, "The crowd of anxious conscripts waiting to lay their claims for exemptions before the Board was not so great as hitherto, and the Board was enabled, therefore, to dispose of every case on yesterday's calendar."  Among them was Thomas Brogan, who pleaded that he was "the only son of a widow" and was therefore granted his exemption.
The crush of applicants apparently prevented the board from closely investigating each pretext.  Thomas Brogan's brother John was very much alive at the time and was his partner in the butcher shop.  For some reason, after John's death on August 16, 1865, his body was brought to 453 Second Avenue, where his funeral was held two days later.
Brogan's was an American success story.  By 1876 his affluence was such that he erected two five-story brick "stores and tenements" nearby at 434 and 436 Second Avenue.  The Real Estate Record & Guide reported on May 6 that they cost him $12,008 each to construct--about $625,000 in total today.
Brogan was highly involved in Tammany Hall politics, as well, and in 1879 ran against Judge Hogan for the party's nomination for State Senator.  The Sun reported that Hogan won "by a decisive majority."  Brogan nevertheless remained active and on February 9, 1888 The Evening World reported that he had been elected one of two vice presidents of the Anawanda Club, the local Tammany social organization.
By now the Brogans' daughter, Mary L., was a young woman and worked in one of the only acceptable jobs for unmarried females--education.  In 1888 she taught in the primary department of Grammar School No. 15 at 728 Fifth Street.  Living with the family that year was Susie P. Connolly, a teacher who worked in the primary department of Grammar School No. 67 on West 41st Street.
In July that year, The World journalist John W. McDonald wrote a series of articles on "The Sixteenth," the voting area that included the Gas House District.  He began the third installment on July 14, 1888 saying, "The story of the Sixteenth Assembly District would not be a complete one without some space being devoted to the 'old-timers.'"  He interviewed a group of "veteran" locals, one of whom said, "Don't forget Thomas Brogan, the Second Avenue butcher, Boss Brogan, as the boys call him, and a fine honorable, good, kind, plain gentleman he is, too.  Boss Brogan is a friend of everybody and everybody is his friend."
The Brogan family left 453 Second Avenue around 1892.  It was purchased by William G. Brady who operated it as rented rooms.  When he sold the house to Mary Plunkett in May 1898, it was described as a "brick tenement."
Mary Plunkett's working class tenants at the turn of the century included Peter Blank, a lineman for the Western Union Telegraph Company.  He was at work in Richmond, Staten Island on November 17, 1910 when a park inspector, Edward H. Hicks, had him arrested.  The Brooklyn Daily Eagle said the complaint was that he "damaged a tree with the spurs that he wore in climbing."  He was fined $2 (nearly $60 today).
Another Western Union lineman, Harley Douglas, lived here in 1916 when his life came to a horrific end.  On February 16 The Daily Standard reported that he and another lineman, John McWeeney were walking alongside the Long Island railroad tracks when they "were struck and instantly killed by westbound electric train No. 357 at 4:40 o'clock yesterday afternoon." 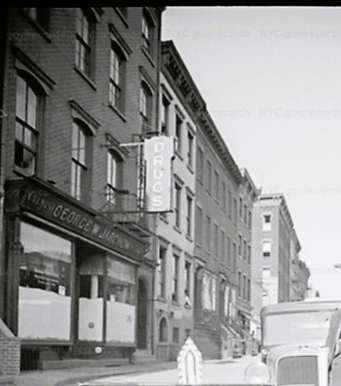 Seen here in 1941, 453 Second Avenue (directly behind the drugstore sign) retained its original lintels.  The stoop had been removed four years earlier.  image via the NYC Dept of Records & Information Services
Mary Plunkett retained ownership of the house until 1922 when she sold it to Margaret A. Berry.  It was converted to apartments and furnished rooms in 1937.  It was no doubt at this time that the stoop was removed and the entrance lowered to ground level.
Major change came in 2006, when a renovation returned the house to a single-family home.  Apparently unwilling to use commercial parking, the owners carved a garage into the former English basement level, their architects disguising it as a carriage entrance with a faux arch.  The windows were given new lintels, with scrolled keystones at the time.
photograph by the author
LaptrinhX.com has no authorization to reuse the content of this blog
Posted by Tom Miller at 1:00 AM