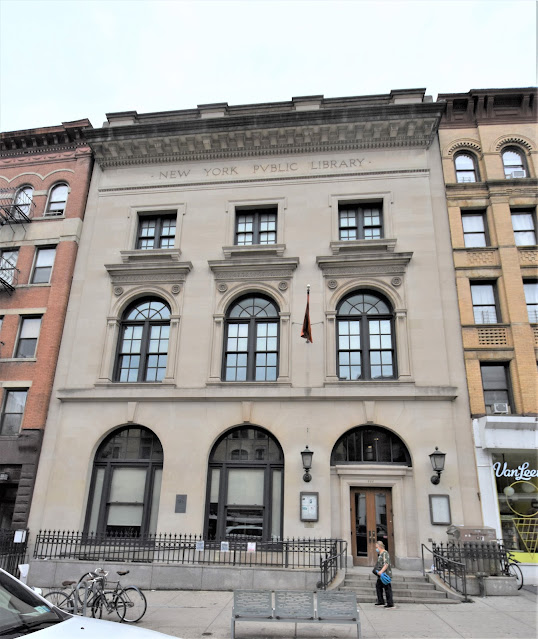 Around the turn of the century the former West End Club building at 444-446 Amsterdam Avenue was taken over by the Century Wheelmen Club--a men's bicycling group.  They renamed it the Century Lyceum.  At the time, the St. Agnes Library was operating from rented quarters.  Organized by the St. Agnes Chapel on West 91st Street, it had twice outgrown its original space.

The management of a continuously expanding circulating library may have become too ponderous for the chapel to handle.  On August 1, 1901 the St. Agnes Library was sold to the New York Public Library for the consideration of $1.00.
Five months earlier millionaire Andrew Carnegie had offered the City of New York a gift of $5.2 million to build free circulating libraries.  The condition was that the city would provide the land and maintain the libraries.   In 1904 the city acquired the Century Lyceum property and on January 13, 1905 the New-York Tribune announced, "Plans have been filed...for a Carnegie library to be erected at Nos. 444 and 446 Amsterdam-ave., and to be known as library No. 3."
The architectural firm of Babb, Cook & Willard designed the three-story building in the Renaissance Revival style.  Faced in limestone and granite, it featured arched openings on the first floor, grand French windows with prominent molded cornices on the second, and a bracketed stone cornice crowned by a classical balustrade.  Construction costs for the 50-foot-wide structure were $80,000, or about $2.4 million today.
By the time construction neared completion in the spring of 1906, the building was no longer being referred to as Public Library #3.  On March 23, three days before the opening, The New York Times explained it would serve "the double purpose of a home for the St. Agnes' Branch Library and for the Library for the Blind."
The Library for the Blind had been established in 1895 by Richard Randall Ferry.  Opening with 60 volumes, it now offered more than 4,000 books and 1,000 pieces of sheet music.  Just as the St. Agnes Library had done, the Library for the Blind had transferred its collection of books to the New York Public Library.  The New York Times said, "The front part of the main floor of the new building will be devoted to the Library for the Blind, which has now one of the largest collections of books for the blind in the United States."
On the second floor were the children's circulating and reading rooms, and on the third was the adult reading room where current newspapers and magazines were available.  There were also workrooms, meeting rooms and the adult circulating room. 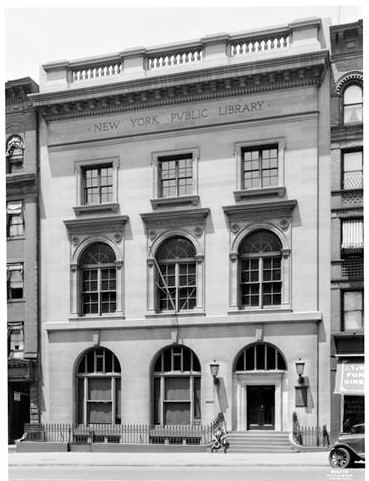 from the collection of the New York Public Library
The Library for the Blind flourished in the new building.  On October 27, 1907 the New-York Tribune reported:

In the library for the blind, at No. 444 Amsterdam avenue, there are about 4,000 volumes, printed in the New York point, Braille, Moon and line letter systems of typography.  Here also are most of the magazines printed for the blind, in English, French and German.  Printing for the blind is such an expensive operation that few of the books of current fiction are included, the last popular novel to be issued in this form being 'The Virginian.'  A feature of the library for the blind is the furnishing of a teacher without charge for the adult blind of the city.

By 1911 the Library for the Blind's music department nearly equaled its book distribution.  On April 14 The Sun reported, "Nearly 4,000 sheets of music, which include all the best compositions, are done in American braille and sent out to the musical blind throughout this State, New Jersey and Connecticut."  The Library for the Blind operated on a tighter schedule than the St. Agnes Library, open to readers from 1:00 to 5:00 daily.  The Sun pointed out, however, that "comparatively few persons avail themselves of the opportunity, since books [for the blind] are delivered free either by post or express."
The Library for the Blind outgrew the shared space by the 1940's, when it was relocated to 137 West 25th Street.  The St. Agnes Library expanded into the entire building, and, like all branch libraries, offered programs for the neighborhood residents.  On the evening of October 19, 1950, for instance,  a screening of the New York Public Library's film forum for teen-agers was held.  The New York Times announced Inside Opera "will be shown and discussed.  Free." 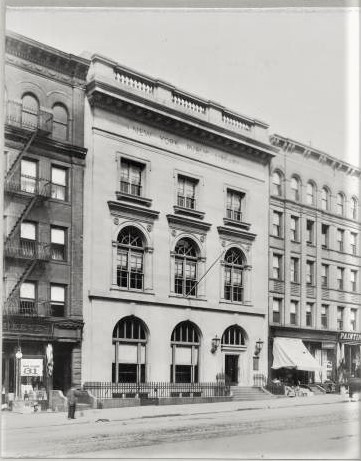 from the collection of the New York Public Library
The third quarter of the 20th century posed financial problems for the city and the library system.  In 1973 the St. Agnes Library, "like many other branch libraries," according to The New York Times, was closed on Saturdays "for lack of funds."  The closure had nothing to do with a lack of interest.  The newspaper noted that "during the week--even in summer, with no air-conditioning--it is bustling and crowded."
Living in the neighborhood in 1983 were Miles and Lillian Cahn, co-owners of the Coach Leatherware Company.  Lillian Cahn was disturbed that the branch was not open on Saturdays, saying "that's the best time for families."  She researched the cost of operating the library on a Saturday, discovering that $22,000 would cover a full year.  On July 19, 1983 Laurie Johnston and Susan Heller Anderson, writing in The New York Times, reported, "So her company has given three times that to assure Saturday service for the next three years."
The article noted, "The branch, near 81st Street, has a large collection of books in Spanish and books for children, and particularly attracts the young and the elderly."  A follow-up article nine months later said, "More than 750 users have crammed the tiny branch some Saturdays, most of them families, people who work during the week and children."
The library continued to host activities, like a poetry reading and a book discussion on Time of the Hero by Marion Vargar Llosa on October 16, 1989.  And in celebration of Black History Month in 1991 the library was the venue of "A Celebration in Word and Song" by the students of the Harlem School of the Arts.
In October 2007 the St. Agnes Library was closed for an extensive $9.75 million renovation.  Aside from restoration of the façade and interior elements, the building received a new elevator and an air conditioning system.   The roof was replaced, a new "story hour room" was created, and all new furniture brought in.  Visitors could now log onto the internet through free wi-fi.
More than two years after the project began, it was finally opened on February 11, 2010.  Writing in the Daily News, Mike Jaccarino said, "Hundreds of people, including neighborhood residents and public officials, showed up at the old library...clamoring for a chance to see the refurbishment and borrow books for the first time since October 2007." 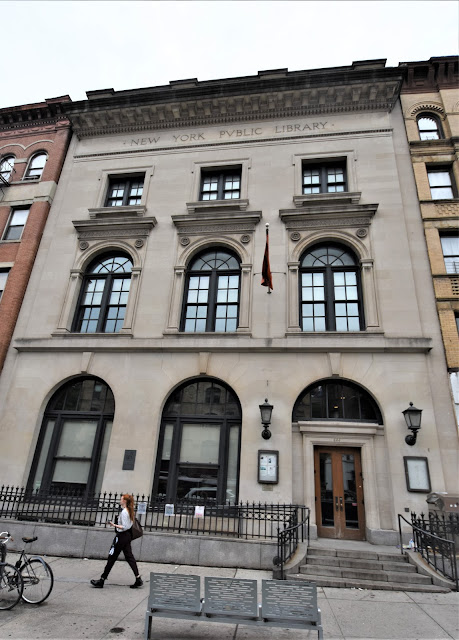 While The St. Agnes Library is easily recognizable as a Carnegie library, its fascinating history is less obvious.
photographs by the author
no permission to reuse the content of this blog has been granted to LaptrinhX.com
Posted by Tom Miller at 1:07 AM