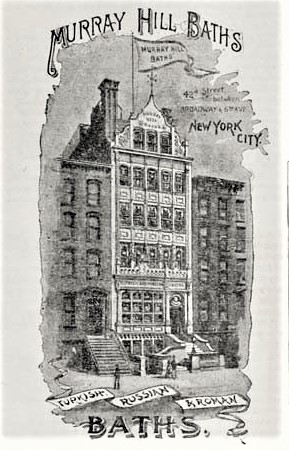 Russian and Turkish "vapor baths" had been fashionable for several decades by 1890.  Unlike the city-owned Free Public Baths which teemed with tenement dwellers who had no means of bathing at home, the Russian and Turkish baths catered to middle- and upper-class patrons.   The Murray Hill Bath Co. was organized that year to create another lavish facility and a site was procured on West 42nd Street, between Broadway and Sixth Avenue.
In January 1891 architect Thomas H. Poole filed plans for the five-story iron-fronted structure.  The cost of constructing the 24-foot-wide building was projected at $85,000--about $2.45 million today.  He designed the facade in a fanciful combination of Tudor Revival and Flemish Renaissance Revival.  The windows contained "cathedral stained-glass in well-blended colors."

Real Estate Record & Guide, December 30, 1890 (copyright expired)
Upon its completion in the spring of 1892, the Record & Guide said "it is doubtful whether these baths are surpassed not only in this country but in Europe."  In order to attract "first-class patronage," the proprietors used only the best materials inside--fine hardwoods, inlaid marble mosaic floors, and Turkish rugs. 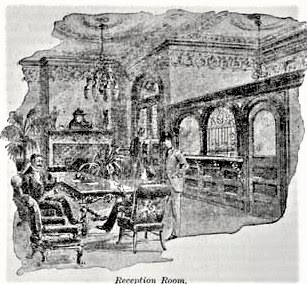 The Real Estate Record & Guide, June 11, 1892 (copyright expired)
Patrons entered into the Reception Room, outfitted as a sort of reading room.  Newspapers, railway guides, and paper and pens for writing were supplied, and in one corner was a stock indicator.  Beyond that was the Hot Room, a "gem of richness and elegance," according to the Record & Guide.  It said, "In its appointments it has not its peer in New York City.  The floors are tiled.  Magnificent Turkish rugs of brilliant colors are spread under the feet of the bathers, and luxurious reclining chairs are provided." 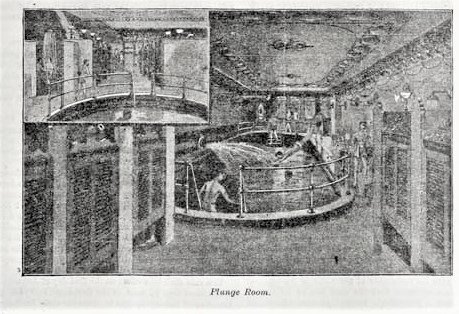 The Real Estate Record & Guide, June 11, 1892 (copyright expired)
After a period in the Hot Room, the patrons moved on to the Plunge Room.  Here a 51-foot long swimming pool sat within luxurious surroundings--mosaic floors and walls, and a "decorated in relief in a design of wreaths and festoons."  Off the Plunge Room were the several shampooing rooms.  There were, as well, cooling and drying rooms, a toilet-room, and "needle and spray showers."
Because the patrons were all well-to-do businessmen, the Record & Guide noted, "A novel feature of value is the long and short distance telephone, which can be used by bathers during the bath, thus enabling them to communicate with their offices, homes and business connections, while telegraph and messenger services are also at hand."
The Dressing Rooms were on the second floor, with wood paneling, two lighting fixtures in the form of full-size Venetian figures holding lamps, and "resting-couches."  Also on this floor were the café and barber shop ("with chiropodist and manicure on hand when desired"), and the Divan Rooms.  The private Divan Rooms contained couches "luxuriously upholstered in rich velvets."  The Record & Guide explained, "They are intended to be used for those who desire privacy, and are laid out to suit one, two or three persons." 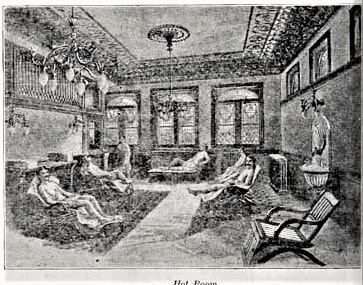 The Hot Room  Real Estate Record & Guide, June 11, 1892 (copyright expired)
The third floor contained 24 "sleeping rooms" which could be rented by bathers who desired a few hours rest; or by transients for longer periods.  The top floor was the "summer room" where bathers, "after being thoroughly restored to a normal heat," could cool off on a hot summer's day.
A horrific accident occurred in the plunge room on July 6, 1893.  Alpheus R. Geer and his wife lived in Garfield, New Jersey.  He had a business there, and was also involved in Van Vorst & Co., hay and grain dealers on West 34th Street.  He and a friend, Frederick Schemmerhorn, walked into the plunge room at around 2:00 that morning.  The Sun reported, "Mr. Geer, who was a fine athlete, poised himself upon the edge of the bath and turned a double somersault into the water, which was above five feet in depth."  The 29-year-old struck his head on the bottom of the pool and he did not resurface.
Attendants and Schemmerhorn all dived in.  He was still conscious when he was removed from the pool, but was paralyzed from the waist down.  The Geer family physician was called, who diagnosed severe spinal cord injuries.  He had the young man moved to the St. James Hotel where his condition deteriorated and he died three days later.
Not surprisingly, given the times, the Murray Hill Baths and similar establishments were all-white domains.  On June  16, 1895, in an early example of peaceful equal rights demonstrations, three Blacks tested the bill Governor Levi P. Morton had signed the day before which said in part, "the discrimination against any person in the matter of service at a hotel, restaurant, theatre, barber shop, or Turkish bath renders the waiter or attendant guilty of a misdemeanor."
The trio, described by The Sun as "good-looking, well-dressed, gentlemanly and reputable citizens," went from one high-end establishment to another, simply to test the waters.  The article said, "Delmonico's, the Bartholdi, and other first-class hotels were not too good to obey the law, and the men got what they ordered, well-cooked and well-served.  Shanley's and O'Neill's restaurants were more particular, and refused to serve the colored visitors, and if Mr. Anderson and his friends choose to push the matter, this policy may prove a costly one to them."
They were not well-received at the Turkish baths.  The Sun reported, "'All full' was the word passed out at Everard's baths and at the Murray Hill baths after a consultation. 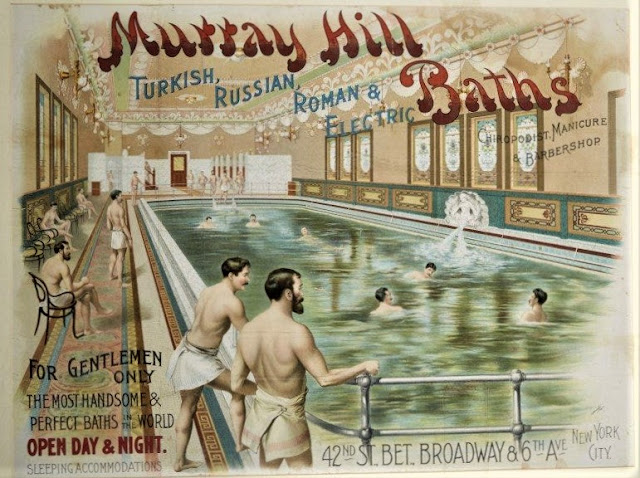 Upscale establishments sought to avoid bad press, but that became unavoidable for the Murray Hill Baths in 1897.  On staff was a "rubber," or masseur, named William Guldensuppe.   He was called by one newspaper, "a true Knight of the Bath, and best known among the army of rubbers."
On a Friday morning in June he left the baths and headed home to the boarding house at 439 Ninth Avenue where he had lived for a year and a half.   He never returned to work.
The boarding house was run by Mrs. Augusta Nack, "a German housewife and a married woman," according to The Evening Times.  She and her husband, Hermann, had separated two years earlier.
Augusta Nack and William Guldensuppe had "made no attempt to conceal their illicit association," said The Evening Times.  But problems first came when Hermann Nack "threatened one day to have revenge upon Guldensuppe for winning the woman away from him."  The handsome masseur's worries were increased when a new boarder, Martin Thorn, vied for Augusta's attentions.
Guldensuppe told other masseurs that in February 1897 Thorn had drawn a pistol and tried to kill him.  Guldensuppe overpowered him and wrested the gun away.  They could not help but notice that "his body bore many black and blue marks, which told of blows of savage force."
On Monday morning, two days after Guldensuppe had left the Murray Hill Baths for the last time, Augusta Nack showed up.   She said she had received a telegram from him, asking her to tell the manager he had gone away and would not be back.  She said she assumed he "wants to go with that other woman of his."
On June 23 a trunk was discovered in the East River.  Inside were dismembered sections of a body wrapped in oilcloth.  Later, a pair of legs, similarly wrapped, were found near the Cob Dock in the Navy Yard.  Five employees of the Murray Hill Baths were called to the morgue to attempt to identify the corpse.
"By lamplight they studied long and carefully what was left of what had been a man," said The Evening Times.  Based on "the ugly scar and the distorted nail upon the forefinger of the left hand," each one of them identified the body as that of Guldensuppe.  The murderer had taken pains to hide his identity.  Not only had he been decapitated, but a large section of flesh had been cut from the chest.  Guldensuppe had had a large tattoo there from his sailor days.
In the meantime, Augusta Nack was hurriedly packing up her things, preparing for a trip to Germany to see her mother.  She would not make the voyage.  Investigators put the pieces of the puzzle together.  When all the facts came to light, it was discovered that Mrs. Nack and Martin Thorn had murdered and dismembered Guldensuppe in a cottage in Woodside, Long Island, on June 23.
The Sun reported, "Mrs. Nack was arrested a week after the murder and Thorn was caught in Harlem about a week later."  Augusta turned State's evidence, explaining that after Guldensuppe had "beaten Thorn," the latter determined to kill him.  Thorn was sent to the electric chair and August Nack was sent to the woman's prison at Auburn, New York for ten years.
In the summer of 1910 42nd Street from Park Avenue to Eighth Avenue was widened.  The Record & Guide reported "Seven and a half feet will be cut off the sidewalk on each curb."  The project resulted in the Murray Hill Baths losing its impressive box stoop which the journal had described in 1892 as "of red sandstone, profusely carved, and surmounted by two wrought-iron lamps of unique design."
The elaborate cast iron fronted building survived until 1925.  On December 30 the Tennessee newspaper The Chattanooga Times reported, "Gotham's most famous citadel of the hangover is no more.  The Murray Hill baths on Forty-second street have been ravaged, looted and knocked down under the auctioneer's hammer, even to the nude statue that stood in the foyer."
The article recalled:

It was a soothing haven for the back wash of endurance poker siestas, farewell bachelor dinners and sundry high flings of social clubs.  Men, bloated and unsteady, retired to the marble slabbed depths and were pummeled and sweated into pink of first class respectability.

The writer explained how patrons who walked through its doors had been guaranteed perfect privacy.  "No one was ever paged at the Murray Hill baths nor for an inquirer was anyone ever there.  Once one left his clothes behind he might disappear as magically as a wraith of steam in one of the cubicle parlors of perspiration."
On December 7, 1925, Time magazine reported, "Down on 42nd Street, workmen dug up the cornerstone of the old Murray Hill Baths, once known as 'The House of a Thousand Hangovers,' another landmark of a Manhattan that is vanishing.  Underneath it they found a pint of champagne, two pieces of script, old-fashioned paper money...four copper coins, and letters of patent issued to one Dwight Berry Brown in 1814 for the invention of a waterloom."  (What the patent papers had to do with the Murray Hill Baths is uncertain.)
Today a massive 55-floor Bank of America Tower building occupies the site. 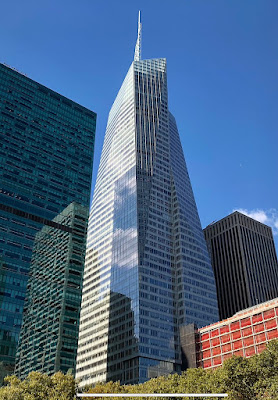 photo by Chris6d
many thanks to Sean Khorsandi for prompting this post
no permission to reuse the content of this blog has been granted to LaptrinhX.com
Posted by Tom Miller at 1:08 AM