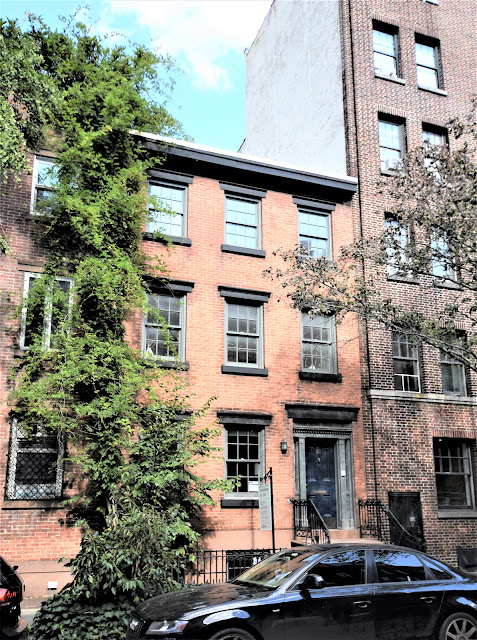 In 1842 Joseph Low completed construction on two 20-f00t wide houses at 11 and 13 Hammond Street.  Three stories tall above a brownstone basement level, they were faced in brick.  Their Greek Revival design included simple but handsome doorways with narrow sidelights and transoms.  The straightforward wooden cornices were decorated by small dentils.
The Low family retained possession of 11 Hammond Street, renting it to a tenant who operated a boarding house.  (In 1864 the street would be renamed West 11th and the house renumbered 211.)
The residents were working class, as evidenced in the advertisements of two who sought employment.  One, on October 31, 1843, read "Wanted--A situation by a respectable young woman as a seamstress, nurse or chambermaid."  Another placed in March 1851 seems to have been written by her parents.  "Wanted--For an American girl, fourteen years of age, a situation in a Protestant family; she is good and kind to children; and would make herself generally useful."
It was possibly Mary Higgins who ran the boarding house at the time.  The widow of John Higgins, she was listed here through the 1840's.  Boarding houses were a common means of earning a living for widows in the 19th century.  Among the boarders in 1847 and '48 were Charles Leary, a mason, and James Malcom, who seems to have been out of work, and his wife, Mary.
Margaret Dornan leased the house in 1851.  Living with her were her daughters, Sarah J. and Margaret, both of whom were teachers, a her young son James.  The senior Margaret, like Mary Higgins, she was a widow and took in boarders.  Mary Malcom still boarded in the house in 1851, now listed as "widow of James."
Margaret took in small families who stayed for years.  The Bradshaws where here in 1851.  Samuel Bradshaw was a weaver, and sons Robert and James made their livings as a painters.
In 1855 James Dornan was old enough to get a job as a blacksmith.  That year another weaver, Samuel Byers, moved in.  He was possibly connected in business with Samuel Bradshaw, and like the Bradshaws, he would remain with the Dornans for years.
James Bradshaw died on August 7, 1860.  His fellow workers from Woodward & Pearse attended his funeral in the house two days later.   Robert was drafted into the Union Army on March 16, 1865.
In 1868 the Low family sold 211 West 11th Street.  At the time the Dornans were still here, as were the Bradshaw family and Samuel Byers.  (Robert Bradshaw had made it home safely after the Civil War and was back working as a painter.)
Having lived in the house for nearly two decades, Samuel Bradshaw died in his bed on July 24, 1869.  As had been the case with his son nine years earlier, his funeral was held in the parlor on July 26.
The Dornans are no longer listed at 211 West 11th Street after 1871.  That year Charlotte H. Gregg, a dressmaker moved in and would remain into the 1890's.  It was possibly she who ran the boarding house as well.  The other residents that year were Robert Bradshaw, Charles J. Rose, a coal dealer, and a woman known only as "Mrs. Eagan."
Mrs. Eagan apparently had a good reason for being coy about her full name.  In June 1872 she was arrested on suspicion of having burglarized the home of District Attorney Britton.  A week later, on June 15, Police Officer Ferry searched her rooms and found "some silverware and other property, stolen from the residence," as reported by the New York Herald.
Charlotte Gregg was still here in 1892, advertising in The Sun on February 14 for "apprentices for dressmaking, good sewers."  Also living in the house was the widow Elizabeth Quackenbush, who received her deceased husband's $180 annual police pension (about $5,200 today).   She remained through 1895.
Greenwich Village had become the center of Manhattan's art community by the turn of the century.  Emile Herbert established his art studio here following World War I.   But trouble came in the fall of 1925.  The Daily News reported on November 7, "Night life in Greenwich Village caused Emile Herbert, an artist, to forget home ties, according to Mrs. Mary de Jara Almonte Herbert...Mrs. Herbert, daughter of a wealthy Spanish family, said she separated from her husband after she learned of revels in his studio at 211 West 11th st."  Herbert did not contest the charges.
By 1929 211 West 11th Street was home to Burton W. and his wife Clara Ogden Davis.   Burton was a former drama critic and was now on Florenz Ziegfeld's publicity staff.  Clara was a journalist-novelist.  The Houston, Texas newspaper The Thresher described her on November 27, 1924 saying, "Clara Ogden Davis, to many people, is a red-headed newspaper man.  Man, not woman.  Not that she is masculine; she isn't.  But she is fearless and efficient and versatile, and independent." 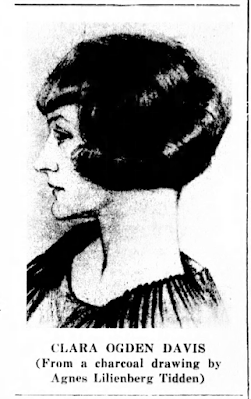 from The Thresher, November 27, 1924 (copyright expired)
A former Ziegfeld actress, Mildred Waynne, was working in London in 1929, but she had come back to New York for just over a week in March.  Burton Davis boarded the German-Lloyd ocean liner the Berlin on the night of March 20 to get a last-minute interview with her.  Before he realized it, the steamship was headed out of New York Harbor.
The Times Union reported, "Davis was slow in his effort to get ashore before the liner departed and was taken to sea.  He appealed to the ship's commander and was put on board the pilot boat when the pilot was dropped."
It would seem that his problem was solved, but the pilot boat had to wait for an incoming liner to pick them up.  They waited from 2:30 in the morning until nearly noon.  And all the while Clara was frantic as to what had happened to her husband.  She told a reporter they had been married 12 years and he had never failed to return home on time.
"The Furness liner Dominica, inbound from Trinidad, picked up the pilot and Davis and landed the writer in Manhattan at 12:30 P.M. today," said the article.  "The first thing he did was to call his wife, Clara Ogden Davis, novelist, at their home, 211 West 11th st., Manhattan, and report himself among the living." 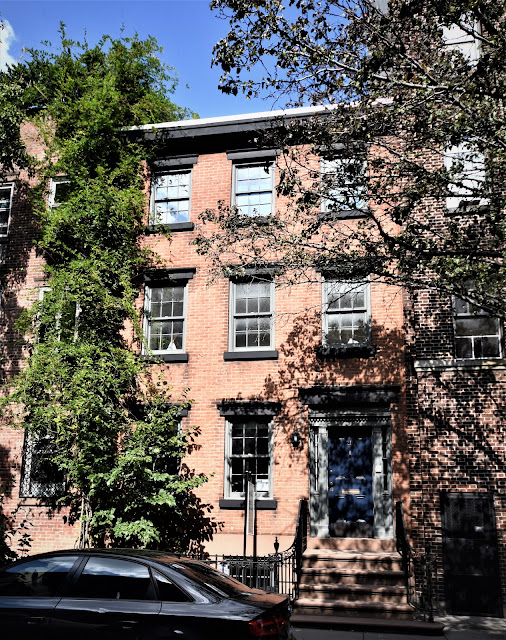 The house was sold in 1940 to Glen W. Holloway for $10,000--in the neighborhood of $182,000 today.   In 1945 it was converted to two duplex apartments.  The configuration lasted until a renovation completed in 1999 brought it back to a single-family home.
photographs by the author
LaptrinhX.com has no authorization to reuse the content of this blog
Posted by Tom Miller at 1:11 AM