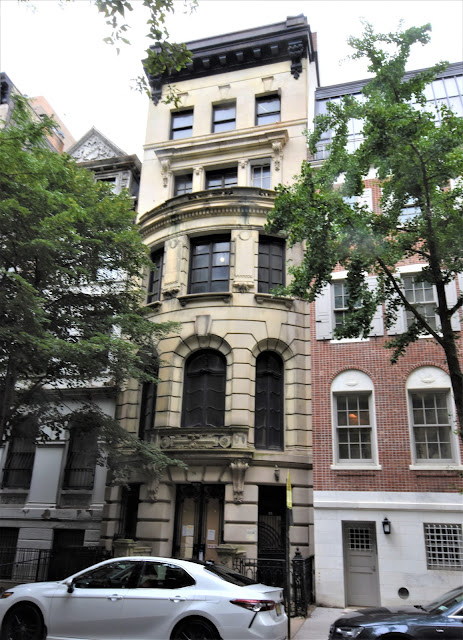 Six years after Allan Jay Clark's death on March 15, 1895, his widow Emmie, sold their home to Edithe Alice Neustadt Stralem.   She was the wife of Casimir Ignace Stralem of the investment banking firm Hallgarten & Company.  Not coincidentally, Edithe's father, Sigmund Neustadt, was also a partner in the firm.  The couple had three children, Donald Sigmund, Pierre, and Marjorie Agnes.
The high-stooped brownstone house which the Stralems purchased in 1901 had been erected in 1889.  The terms of the sale laid out in explicit detailed all the interior elements that were to stay.  But two years after moving in the Stralems changed their minds.  English basement houses had fallen from fashion and increasingly old brownstones like theirs were being razed or remodeled.
On April 24, 1903 The New York Times reported, "Architect C. P. H. Gilbert filed plans yesterday for the five-story residence to be erected for C. I. Stralem at 14 East Eighty-second Street."  Completed in 1904, the limestone-faced house was a quiet take on the Beaux Arts style.  The three-story swell front provided a commodious balcony to the fourth floor.  Above the centered entrance was a carved stone balcony in front of one of three sets of arched openings with elegant French windows.  A stately metal cornice crowned the fifth floor.
On January 15, 1903, the year construction started, Stralem became a member of the New York Stock Exchange.  While we might think of turn-of-the-century brokers as stodgy, stuffed shirts, initiation to the Exchange was more like a raucous fraternity hazing than a decorous ceremony.  The New York Times reported:

C. I. Stralem had to go through many degrees of hazing before he was permitted to retire as gracefully as he could.  His appearance on the floor for the first time was a signal for a general assault by the older members.  His coat, and hat were the first to go, his collar and tie were torn off, and his shirt in turn was flung to the breeze, as if it were of the proverbial red color.  Although most of the brokers in the crowd were bears, the sight of the shirt acted on them as the red flag does on the bull.  they returned with the frenzy of the 'Commune' and disfigured the nether garments of their unfortunate victim till he was led off the floor wearing his undershirt like a Chinaman.  He had to get a new outfit of clothing before he could appear before the Chairman to be introduced.

In May 1909 Edithe's father died in Cannes, France.  Her personal fortune was increased following the settlement of his affairs.  Of his significant estate, each of the three children received $50,000--or about $1.45 million in today's dollars.
In August that year the Stralems hired architect Herbert A. Mainzer to do the equivalent of $246,000 today in upgrades to the house.  Included were "plumbing fixtures" and a passenger elevator.  (Mainzer would design the family's summer home in Chappaqua, New York, in 1913.)

Marjorie's wedding to Maurice Schwob was an understated affair.  That would not be the case when Donald was wed to recent debutante Jean Ickelheimer on April 10, 1928.  Donald was well-known in young society and his name routinely appeared for his participation in tennis matches at Long Island country clubs.  He was a Harvard graduated and later went to Trinity College in Cambridge.  He was now working in his father's banking firm.
The Daily News called Jean, "one of the prettiest of the post-debs, as well as one of the most popular."  The ceremony took place at Sherry's, followed by a reception "attended by several hundred relatives and friends," said The New York Times.  The banking community was highly represented.  Jean Ickelheimer's grandfather was Philip Lehman and her cousin, Robert Lehman was one of the ushers (as were Donald's brother, Pierre and his brother-in-law Maurice Schwob).  Donald's best man was Paul Felix Warburg.
Edithe's sister, Adele, was married to the millionaire banker Mortimer L. Schiff.   He died on June 4, 1931 while she was in Paris.  Several months later Adele underwent an operation.  The Sentinel said, "Mrs. Schiff, it is stated, never recovered from the shock of the sudden death of her husband."  Although the operation went well, Adele did not rebound.  Her funeral was held on July 8, 1932.
Edithe's grief for her sister quickly turned to concern for her husband.  Three days after the funeral Casimir fell ill with what doctors diagnosed as "a lack of sufficient white corpuscles in the blood, followed by a severe chill."  Four doctors attended him and several blood transfusions were made.  But the 57-year-old died on July 15.  Nine days after she had attended her sister's funeral, Edithe sat through her husband's.
It was now just Edithe and Pierre in the five-story mansion.  That ended in the summer of 1936.  Pierre was married to Nancy Lou Disosway Coffyn in St. George's Episcopal Church on Stuyvesant Square on June 11.
Among her husband's favorite philanthropies was, perhaps unexpectedly, the Girls Scouts of America.  Edithe continued the support and on April 18, 1938 the Times Union of Brooklyn reported that "The nine Brooklyn and Queens members of the 'traveling troupe' of Girls Scouts who went from borough to borough recently presenting the Girl Scout 21st anniversary play-pageant, were entertained at tea today by Mrs. Casimir I. Stralem in her home, 14 East 82d st., Manhattan.
The mansion remained in the Stralem family until 1962.  In 1970 it was converted to three apartments and a doctor's office.  Among the initial occupants and no doubt the most celebrated was football star Joe Namath.  Writing in The New York Times on July 24, 1971, James F. Clarity wrote, "The New York Jets' offensive linemen, who usually protect Joe Namath from those trying to harm him, will be of no use in defending him against his latest opponent--an interior decorator."
Gene Coffin and Namath had gone head-to-head about the decorating scheme.  In his 2005 book Namath-A Biography, Mark Kriegel touched on the tension, saying the duplex was "full of Tiffany lamps, gilt clocks and assorted floral and rococo trimmings.  The decorator's concession to Joe's tastes was a game room that housed a pool table and his father's favorite shuffle bowling game, a gift from his father."
It all ended in court.  Gene Coffin Ltd. sued Namath for $30,000 for "having backed down on a contract."  Namath counter sued for $71,000 "charging that the job exceeded the agreed price."
In 2005 Russian-born Janna Bullock purchased the house for $12.2 million.   Penelope Green of The New York Times wrote in July 2007 that the nanny-turned developer "has taken as her hobby, as she put it, the buying, renovating and flipping of choice single-family Upper East Side town houses."  Her designs were not always welcomed by neighbors and preservationists.
The Stralem mansion escaped extensive renovation while Bullock busied herself with gutting the house next door at 12 East 82nd Street and removing the rear walls.  She had purchased that house in 2006, but in April 2012 The New York Times wrote, "The back of No. 12 is five stories of jagged bricks, exposed beams and a sad blue tarp, shredded as if by desperate animals, hanging in halfheartedly across a few years of the open building."  Rain poured in during the summer and snow piled up in the window.
Regarding the Stralem mansion, The New York Times journalist Robin Pogrebin explained that Bullock "was going to renovate and sell [it] before she got sidetracked."  She had converted the second floor to a gallery of sorts where she staged the first exhibition of her own art in March 2012.  Photographs of the exhibition show that she had removed the interior walls, the ceilings and flooring to create a sleek Soho-ready space.
In 2018 plans were filed to convert the mansion to a single-family home.  Currently a Stop Work Order is in effect.  But whatever desecration is going on inside, the exterior is protected by landmark status (it sits within the Metropolitan Museum Historic District), and C. P. H. Gilbert's staid limestone façade should be safe.
photograph by the author
LaptrinhX.com has no authorization to reuse the content of this blog
Posted by Tom Miller at 1:09 AM