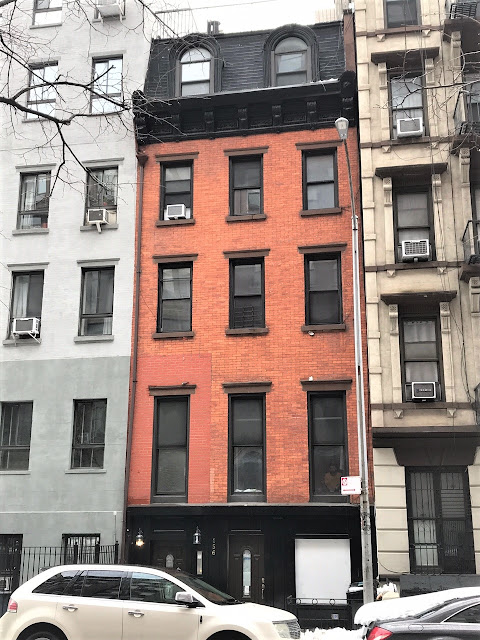 By 1855 broker Morris DeYoung and his wife lived in the comfortable brick-faced house at No. 120 West 15th Street (renumbered 156 in 1860).  Theirs was one of a row of Italianate houses completed a few years earlier on the south side of the block between Sixth and Seventh Avenues.  Each of the identical, 20-foot wide residences was three stories tall above an English basement.  The parlor floor windows extended to the floor, suggesting they originally opened onto a cast iron balcony.  Pretty foliate panels filled the spaces between the brackets of the pressed metal cornices.

While it was common for families to take in roomers or boarders, the DeYoungs seemed to have been nearly unusually desperate to do so.  Mrs. DeYoung placed an ad in the New York Herald on January 9, 1856 which read, "A lady, who occupies a house too large for her necessities, would like to dispose of some rooms to single gentlemen."  (Why she worded the ad to sound as if she were widowed or single is puzzling.)
The ad apparently did not produce results and a month later Mrs. DeYoung changed her strategy:

A lady of very superior education and capacity for imparting instruction, and who is permitted to refer to persons of the highest standing as to her worth and attainments, wishes to take into her family, a few young ladies, whose entire education she will superintend.

Another ad in May noted that in addition to an education, the young ladies would be surrounded "with home influences and comforts."
When the boarding school idea apparently did not work out, Morris placed a rather peculiar ad in the New York Herald on September 11, 1857:  "Board--A Lady Invalid can be accommodated with board and nursing, and every requisite attendance.  No other boarders or children...Address M. D., 120 West Fifteenth street, New York."
It seems that the DeYoungs were in financial straits.  Only a few weeks later, on November 1, they offered, essentially, the entire house for rent, other than space for themselves:

To Let--Unfurnished, to a very small, quiet and unobtrusive family only, for $130, in advance for six months, the parlor, alcove and tea room (entire parlor floor), dormitory and ante room, on bathroom floor; rooms on upper floor, with privilege in kitchen, vault, &c.  Hot and cold water, bell and register in each room.  Occupant has no children or boarders.  A rare opportunity for a suitable party desiring the exclusiveness of an entire house.

The mention of  bells and registers referred to the servants' call bells, and the floor registers that allowed heat to rise throughout the house from the basement furnace.
The DeYoungs either soon sold their home or lost it in foreclosure.  By the following spring it was owned by D. S. Barnes who advertised it for rent in April, describing it as a "three story, high stoop, genteel modern house."
He found a tenant in a Dr. Dubois who ran the house as a sort of women's hospital.  An advertisement in April 1858 was entitled "Important To Females" and coaxed, "Diseases of females exclusively treated by Dr. Dubois."  For between $1 and $5 ($160 for the most expensive today) he guaranteed "remedies for Female Derangements."  Patients who traveled to the city were offered "board, nursing and exclusive attendance."  (The advertisements worrisomely hinted at abortions.)
The doctor's residency was short-lived.  By 1860 No. 156 West 15th Street was being operated as a boarding house.  Among the residents that year were Swedish immigrants G. Berggvist and his wife, Margaret.  Other boarders within the next few years included Isaac I. Lazarus, who dealt in "showcards;" Joseph Lyons, a commission agent; and physician Charles Salmon.
The boarders enjoyed upscale surroundings.  An inventory in 1866 showed a seven-octave piano in the parlor, oil paintings, and "elegant" parlor furniture.
The list was compiled because the house was being sold that year.  It was purchased by Owen W. Brennan and his wife, the former Mary E. O'Connor, and, finally, there would be a long-term resident.
Mary was his second wife.  His first, Margaret Horn Brennan, had died in 1848, just months after the deaths of two of their sons, James Timothy and William Troutman, in 1847.
The 15th Street house would be tightly populated.  There were three sons, John, Winfield Scott, Charles M., and three daughters, Annie W., Isabel Hazel, and Louise.
Brennan was born on November 1, 1814.  His father, Timothy, had fought in the War of 1812.  Owen Brennan had started out his career in the liquor business, but turned to public service when Mayor Fernando Wood appointed him Captain of Police of the 6th Precinct.  His career soared.  Three years later he was elected Police Magistrate; in 1862 he resigned to run for City Controller and was elected; and in 1865 he was appointed a Commissioner of Charities and Correction.
It was almost assuredly Brennan who updated and enlarged the house by adding a stylish mansard roof with arched dormers.  In addition to his other positions, he was an Officer of The Central Park, vice-president of the Guardian Savings Bank, a director in the North and East River Railroad Company, and a manager of the Roman Catholic Orphan Asylum.
The house was the scene of Annie's marriage to Charles O'Connor on January 5, 1869 with, according to the Evening Telegram, "a number of their friends and relatives being present."
When the Guardian Savings Bank failed in 1871 The New York Times placed the blame upon its directors.  The fact that the president was one of the newspaper's most scorned personages was likely a factor.  It began its article on January 13, 1872 saying:

Would it not be well for some eminent whitewasher to exercise his art on the northern wall of the late lamented Guardian Savings Bank, in Chatham-street?  All who come down the Bowery see the names of this swindling concern and its managers staring them in the face.  Why perpetuate, as on a monument of brass, the names of 'William M. Tweed, President, and Walter Roche and Owen W. Brennan, Vice-Presidents'? 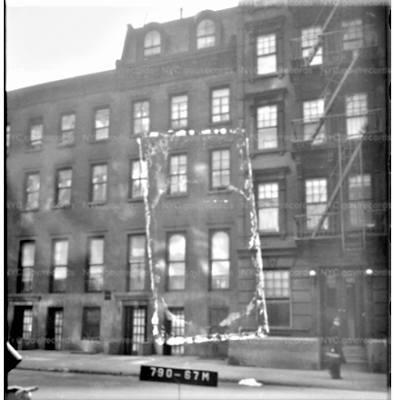 The stoop was gone by 1941.  The architect deftly copied the original lintels to create a window where the entrance had been.  via the NYC Dept. of Records & Information Services
At some point before 1940 the stoop was removed and the entrance moved to the basement level.  It was not until 1997 that a renovation resulted in official apartments--three on the former parlor level and two each on the upper floors.
The address received significant press coverage in 2018 when the city's Office of Special Enforcement sued Dr. Philip Baldeo and Miguel Guzman for "illegal hotel use."  The charges claimed the pair had rented six of the nine units to tourists over a three-year period. 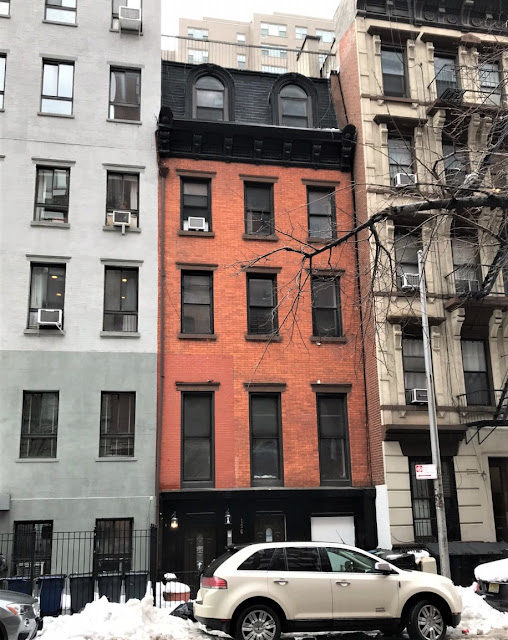 Although the Brennan house is in remarkable shape above the commercial space, a recent real estate listing suggested replacing it with a modern apartment building--even offering a proposed rendering.
photographs by the author
LaptrinhX.com has no authorization to reuse the content of this blog
Posted by Tom Miller at 2:10 AM