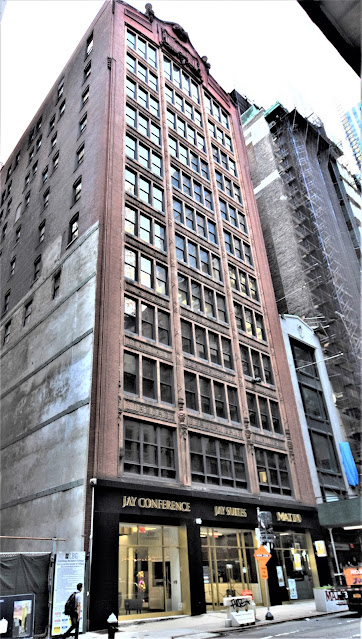 On April 12, 1861, the very day that the first shot was fired on Fort Sumter, an announcement appeared in the New York Herald that Mrs. Ogden Hoffman's French and English Boarding and Day School had "removed to 17 West 38th Street."  The double-wide mansion, which sat just west of Fifth Avenue, had previously been home to artist Thomas Pritchard Rossiter.
By the end of the century fashion had moved further north.  Elegant mansions and private girls' schools were quickly being replaced by commercial buildings.  On June 20, 1908 the Real Estate Record & Guide reported that Mary L. Barbey had purchased the property for $170,000--a staggering $4.87 million today.
Mary Barbey, well recognized in real estate circles, wasted little time in demolishing the old residence and by the first week of August the architectural firm of Delano & Aldrich had completed plans for a replacement structure.

The architects released this rendering in August 1908.  Real Estate Record & Guide, August 8, 1908 (copyright expired)
On August 8 the Real Estate Record & Guide wrote, "When completed the structure will be 12 stories in height...It has been designed for both offices and lofts."  The article pointed out the architects' somewhat surprising color scheme, saying it "will be in marked contrast with the conventional light brick, limestone and terra cotta of the majority of new structures in the uptown section."
The base would be faced in "dark red marble, with bronze trimmings."  The upper floors were clad in dark red brick and red terra cotta to create an overall monochromatic structure.
The architects' take on the "Modern French" style was noteworthy.  The second through twelfth floors were framed within a single elliptical arch.  The full-height piers between the grouped openings took the form of engaged fasces that sprouted from elaborate terra cotta urns.  Above the top floor a panel--surrounded by sumptuous decorations--announced the construction date.  Massive terra cotta urns stood guard along the parapet. 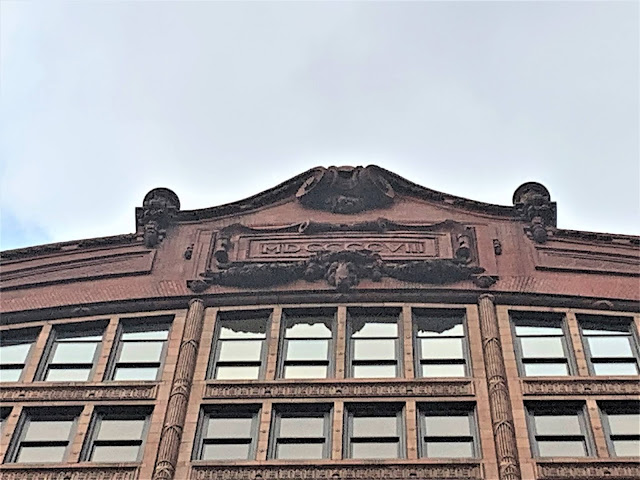 photo by Sean Khorsandi
The cost of construction added another $150,000 (or around $4.3 million today) to Mary Barbey's outlay.  The costs were actually higher, since she had purchased the property at 13 West 38th Street as well, which allowed the architects to add fenestration to the eastern wall--an enormous marketing point when it would come to renting the spaces.
The completed Barbey Building filled with unexpected bedfellows--mostly publishing firms, millinery houses and architectural offices.  Among the latter was the Société des Architects Diplome par le Gouvernement Francais.  A chapter of the American Federation of Arts, it had been organized in November 1904.  The following year space was leased to Columbia University "to be used in connection with the Architectural School," according to the Record & Guide on May 18, 1912.  By 1919 there were no fewer than eight architectural offices in the Barbey Building, including John Allyne Gade, Scopes & Feustmann, and John C. Greenleaf.

The offices of the Print Publishers' Association of America were here by 1911.  Also in the building were the Detroit Publishing Company, the Home Review Publishing Co., and the Macauley Company.
In its column "Books" on January 7, 1917, The St. Louis Star and Times reviewed two new releases by Macauley Company, Just a Woman, by Eugene Walter; and The Mark of the Beast, by Reginald Wright Kauffman.  It was most likely the latter that landed the firm's president behind bars later that year.  The review said:

On December 12 that year The Sun reported, "Leo S. Furman, president and treasurer of the Macauley Company was arraigned before Magistrate Nolan in the Jefferson Market court yesterday."  He had been charged by Special Agent Bamberger of the Society for the Suppression of Vice "with selling an indecent book."  In evidence were 2,043 copies of the offending book.  Furman furnished $300 bail until his formal hearing. 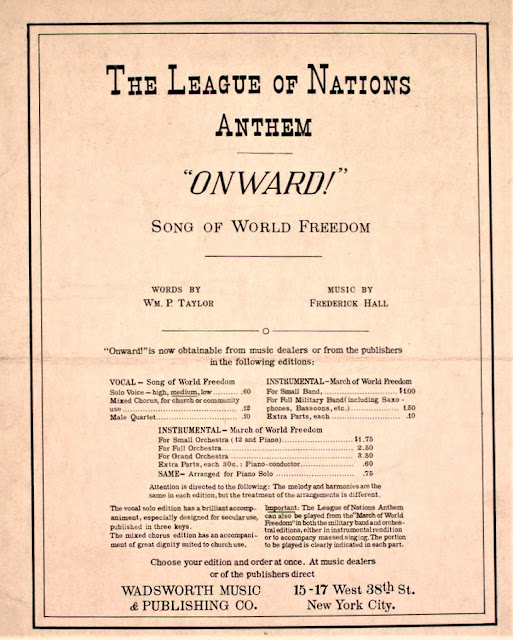 Another publisher, Wadsworth Music & Publishing Co., released this sheet music in 1918.  from the collection of The Lester S. Levy Sheet Music Collection, Johns Hopkins University
Among the millinery-related firms in the building were the Walter Mfg. Co., makers of braids and trimmings which moved in in 1915; the firm of Aaron Michel which manufactured "novelties in flowers, feathers and ornaments," according to The Illustrated Milliner in 1916; Irvin A. Weil, wholesale flowers and feathers dealer; and trimmed hat maker J. I. Guedalia. 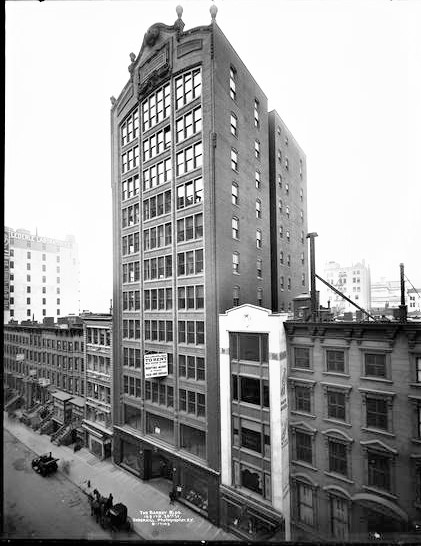 photo by Irving Underhill, from the collection of the Museum of the City of New York
There were, of course, tenants unrelated to the architectural, publishing or millinery fields.  Two artists had their studios in the building.  It was here that sculptor William Ordway Partridge worked on his statue of Thomas Jefferson.  Commissioned by Joseph Pulitzer to stand on the grounds of Columbia University in front of the Pulitzer School of Journalism, it was unveiled on June 2, 1914.  Also in the building was the studio of artist and poet Robert Burns Wilson.  Following his death in April 1916 The Sun reported, "Between thirty and forty of his paintings are now on exhibition at 15 West Thirty-eighth street."
An ample bust was a feature more associated with women of loser morals than to refined ladies.  And so, the Ovida Corset Company devised a solution for well-endowed society women--the Reducing Brassiere.  The Corset and Underwear Review said it "is practically the only garment of its kind on the market." 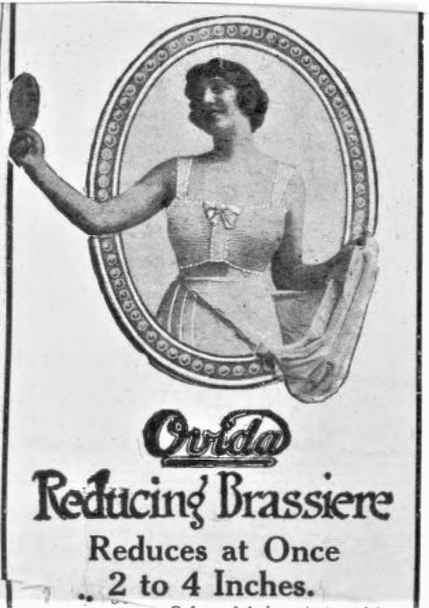 The New York Times, April 19, 1914 (copyright expired)
The success of the undergarment forced the firm to move in the spring of 1915.  In its March edition The Corset and Underwear Review reported that the firm's move to West 37th Street "has been made necessary owing to the constantly increasing popularity of the 'Ovida Reducing Brassieres."
The ground floor store was leased to the Allegretti Chocolate Cream Company in 1918, while architects, milliners and publishers continued to fill the offices.  In 1920 the publisher of The American Milliner moved in.  Architects Grenville Temple Snelling, Samuel A. Hertz, and John C. Greenleaf all had offices here at the time.  (The rent for a full-floor in 1920 was the equivalent of $115,000 per year in today's money.)
The Broman Hat Co. opened its "new, handsome showrooms," as described by The Millinery Trade Review, in July 1921.  The article said, "The fall presentation includes many smart conceptions derived from late Paris creations, developed in hatters' plush, Lyons velvets, felts.  The new showrooms speak well for the judgement of the firm, being handsomely decorated and admirably situated."  Other millinery firms in the building at the time were the Seaman Hat Co., Inc., and H. Rubenstein, agent for Joseph Dryer's Le Roy hats. 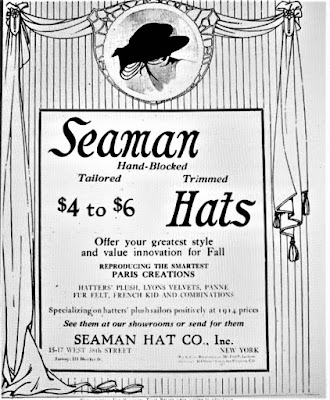 The Millinery Trade Review, August 1921 (copyright expired)
Expectedly, the tenant list of the Barbey Building changed in the second half of the 20th century.  The stationery firm, Coronet Industries, Inc., moved in in 1964 and by 1972 Uniclub, a mail order business, was here.
Uniclub received unwanted press in April 1972 when Bess Myerson, the Consumer Affairs Commissioner, warned the public "not to buy" from the firm.  In what The New York Times called "an unusual move," she said in a statement it and five other mail-order houses "consistently disappoint consumers by non-delivery, late delivery and delivery of damaged or defective merchandise."
Not long afterward, a possibly shadier business, Finderhood, Inc., operated from the building.  Run by George Feldman, it was described by New York State's Attorney General Louis J. Lefkowitz in December 1977 as a "worthless money exchange."  The State Supreme Court prohibited the firm "from advertising and representing that their money-exchange service of members a realistic means of borrowing or obtaining money," as reported by The New York Times on December 4.
Feldman was in hot water again only four months later.  The Attorney General discovered that Finderhood, Inc. promised "Library of Finder's Fee Opportunities Regularly $235...take it FREE!"   The library was a listing of fees paid by individuals seeking investors.  But when readers sent in their $1, they received an application requiring payment of $129.95 for a one-year membership to the "free" library.
In 1985 Lord & Taylor, whose department store was around the block on Fifth Avenue, leased the Barbey Building for its corporate offices, while subleasing unneeded space.  On November 2, 1986 Lisa Foderaro, writing in The New York Times, explained that employees going from the store to the headquarters, "must walk outside, taking the bad weather with the good."
To remedy that, Lord & Taylor made a deal with the owner of 13 West 38th Street.  Foderaro wrote, "soon a crane will hoist a bridge weighting seven and a half tons over it.  The two elements of Lord & Taylor will be united and employees will be able to save time and avoid cold gusts by taking the 21-foot enclosed passageway." 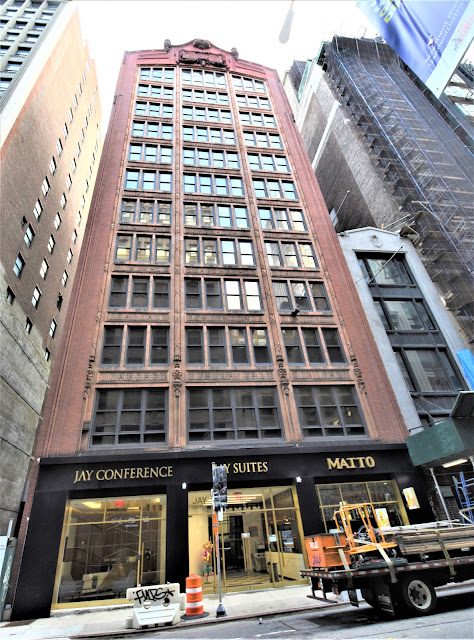 Lord & Taylor closed its Fifth Avenue department store and the 38th Street headquarters in January 2019.  Recently a renovation to the Barbey Building was completed.  All traces of Delano & Aldrich's red marble base have been obliterated, but the upper floors are stunningly intact.
photographs by the author
many thanks to Sean Khorsandi for prompting this post
LaptrinhX.com has no authorization to reuse the content of this blog
Posted by Tom Miller at 2:13 AM