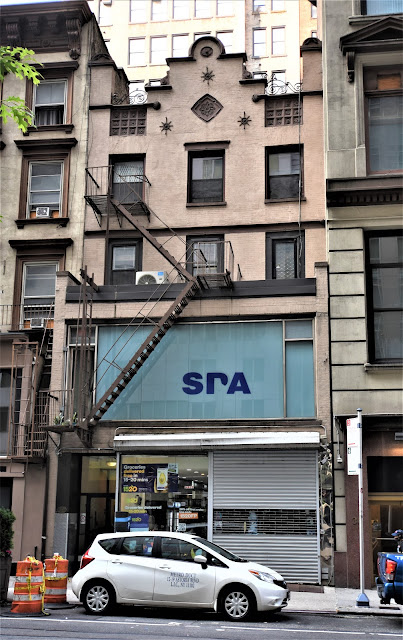 In 1846 John Just's home was among the few fine residences north of 23rd Street.  A description of the property a few years later hinted that it originally resembled a country home, saying the "well-built four-story brick house" sat within an "inclosed piazza."  Just's carriage driver would have paused to drop the family off under the porte cochere (noted in another ad) before continuing to the stable in the rear.   The house was plumbed for gas, but there was no mention of "Croton water," or indoor plumbing.
A decade later the area was seeing development--enough that 34 West 37th Street was not too remote for boarders.  On September 12, 1859 an advertisement in the New York Herald read:

A private family, residing at No. 34 West Thirty-seventh street, can accommodate one or two young gentlemen desirous of having a comfortable residence for the fall and winter months.  Breakfast and tea if desired.  They can also have the use of a carriage house and stable.

John A. McLean was apparently one of the Just family's servants.  Born in Scotland, the 36-year-old died on October 29, 1860.  An announcement in The New York Times  the following day said, "His friends are invited to attend his funeral, from the residence of John Just, No. 34 West 37th-st., this afternoon."
The Justs remained in the house until February 1863, when it was sold to Joseph A. Levy.  He was a broker with offices at 8 Pine Street.
Levy seems to have soon leased the stable to Ellis Gotthold for his business.  On June 6, 1867 The Evening Post reported, "This morning, at half-past one o'clock, a fire was discovered in the rectifying distillery of Ellis Gotthold."  Investigators suspected spontaneous combustion.  "In his efforts to extinguish the fire, Mr. Gotthold was severely burned about the neck and hands."
By 1874 the neighborhood had greatly changed as houses increasingly lined the blocks between Fifth and Sixth Avenues.   That year 34 West 37th Street was offered for sale or lease.  The advertisement highlighted the amenity of a private stable, saying the house was "suitable for a physician or a persons desirous of having their horse under their own supervision."
It became the home of the Dr. Charles Phelps family.  Born in 1834, Phelps had begun his medical practice in 1859 and was connected with Bellevue Hospital.  He and his wife, the former Isabel Marguerite James, had one son, Luis James Phelps, born in 1864.
Dr. Phelps enjoyed a spotless reputation, but it was nearly ruined by one of his prominent private patients--James Gordon Bennett, Jr.--in 1877.   The wealthy and eccentric publisher of the New York Herald had attended a New Year's Day reception in the home of his fiancée, Caroline May.  The engagement was abruptly ended after Bennett became intoxicated and urinated in the drawing room fireplace.  The following day Caroline's brother, Frederick, struck him with a horsewhip and challenged him to a duel.
Bennett agreed and, as a precaution, brought Dr. Phelps along.   Although duels were long out of fashion (and illegal), the men met at dawn.  Luckily, although May received a minor flesh wound, neither was seriously hurt.  The New York Times said on January 11, "the failure of the combatants to puncture each other more effectually was due to the novelty of their position and the unusual distance--20 paces--between them."
On January 9 Dr. Phelps was called before a grand jury.  He was asked a series of questions like, "Do you know if any hostile meeting has occurred between Mr. Bennett and Mr. May?" and "After leaving New York on Sunday last, when and where did you see Mr. Bennett."  The New York Times reported, "Dr. Phelps declined to answer any of these questions."  Judge Gildersleeve demanded that he answer, while Phelps's attorney said he "should not be compelled to answer any questions that might criminate himself."  Gildersleeve eventually lost patience and committed Phelps for 30 days for contempt of court.
In 1893 Luis James, now an attorney, was made a commissioner of deeds, a position similar to a notary public today.  That year his father was appointed to the Board of Police Surgeons.  It was a role that would once again put him in an unfavorable light in the press.
On May 25, 1894, The Evening World entitled an article "Used Corpses For Targets / Ghastly Experiments Made by Dr. Phelps at the Morgue."  The article explained, "Dr. Phelps is a member of the Anatomical Committee of Bellevue Hospital, and conceived the idea that it would be beneficial from a scientific point of view to test the effects of wounds produced by firearms shot at different distances into the brain and with bullets of varying calibre.  The result was a shooting match in the rear room of the Morgue."
That room was normally used for autopsies, but now was Phelps's text lab where unclaimed bodies were shot.  The article described the procedure:

An unclaimed body, said to be that of a gray-haired old man, was taken from the ice chest and stood up in the corner.  The doctor stood a few feet off, and taking deliberate aim, sent a large bullet crashing through the brain.  Experiments were then made at shorter range.  The second body into which lead was poured is said to have been that of one of the many unfortunate creatures who seek oblivion from trouble in death.

Although the newspaper attempted to rouse public indignation, authorities supported Phelps.  The morgue keeper, A. N. White, said the tests were done "with the consent of Warden O'Rourke, who claimed that the experiments were made for the benefit of science."  Members of the medical staff at Bellevue Hospital told a reporter that they regarded "the affair as perfectly proper."
On March 2, 1901 Brooklyn Life said, "Miss Marie Christina Nichols's engagement...is of especial Brooklyn interest on account of the family's prominent identification with this borough.  Her fiancé is Mr. Luis James Phelps, an attorney, residing at 34 West Thirty-seventh street, Manhattan."
The following year, in April 1902, Isabel and Charles Phelps sold their home of nearly three decades to another physician, Dr. Daniel H. Smith and his wife Ella.  The price--$70,500--reflected the soaring property values in the neighborhood.  It would equal about $2.16 million today.
Smith and Phelps may have known one another through their mutual positions on the Board of Police Surgeons.  Born on April 12, 1852, Smith had graduated from the College of Physicians and Surgeons in 1873 after which he studied further at Glasgow University.
Dr. Smith died on July 10, 1912 at the age of 60.  Ella remained for three more years.  Then, on November 30, 1915 an auction was held of "all the household and personal effects and presentation pieces from the art centres of the world."  Special focus was placed on the "collection of oil paintings."
Ella sold the house the following month to "a buyer who will alter [it] for business purposes," according to the Real Estate Record & Guide.  It seemed, however, that the end was on the horizon for the vintage residence when the Record & Guide reported three months later that architect William H. Gompert "is preparing plans for a 16-story brick and limestone store, office and loft building...for Walters, Inc."
But instead, the property was resold to the Altman Estates, Inc.  The firm hired architect Eugene De Roge to make "alterations and additions" to the former house at a cost of $5,000 (about $120,000 today).
De Roge's renovations were substantial.  A two-story commercial extension as erected at the property line.   The cornice was replaced with a parapet and fanciful Flemish Renaissance Revival stepped gable.  And terra cotta tiles, more in keeping with the Queen Anne trend of a generation earlier, decorated the upper portion of the facade. 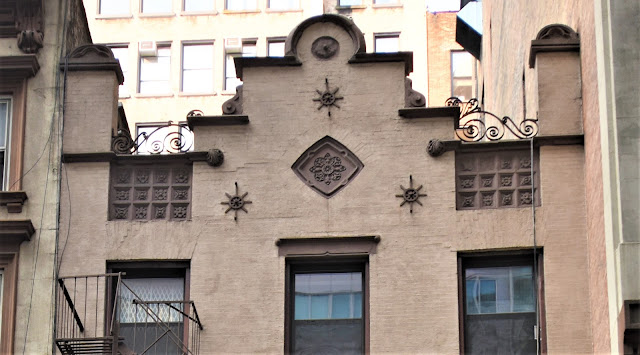 Whimsical metal scrollwork, imitating volutes, flanks the stepped gable.
The first and second floors contained separate store spaces, and the upper floors held apartments.  The Altman Estate quickly marketed the second floor in April 1917 saying it had "attractive show windows...suitable [for] retail specialty business or high-class wholesale."
The ground floor was leased to Lewis Hessler.  In its June 1917 edition The Upholsterer and Interior Decorator reported he "has opened a new showroom at 34 West Thirty-seventh Street, and will carry a complete line of period furniture."  The term "period furniture" was a bit misleading.  An advertisement on February 17, 1918 pictured suites of reproduction furniture in 18th century styles.  It was high-end merchandise, a 10-piece "Mahogany William & Mary" dining room suite retailing at the equivalent of $10,200 today.
The second floor was home to B. Paul's hair salon. 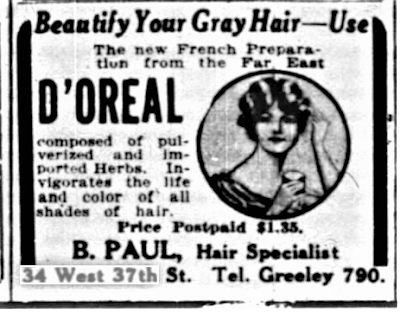 The New York Times, December 23, 1917 (copyright expired)
The apartments were leased to well-to-do tenants.  On March 18, 1919 The Sun reported that "Capt. Lambert of the Lambs Club," had rented and apartment, and two months later Thornton W. Allen moved in.
A prolific arranger and composer, Allen was responsible for several American university alma maters and football fight songs.  He was the managing editor of The Musical Courier and in 1910 had established the music publishing firm, the Thornton W. Allen Company.  Among his songs were "Vanderbilt Forever," "Maryland Victory Song," and "Let's Go Trojan."
Lewis Hessler's furniture store did not last long in the space.  It was home to the Laun-Dry-Ette Co. by the end of 1918.  The firm sold a wide variety of household appliances.  An advertisement in October 1920 pictured a Mermaid Electric Dishwasher, a Capitol Ironer, a Hoover Suction Cleaner, a Ruttenber Electric Range and the Laun-Dry-Ette electric washing machine.  The ad promised:

With these five servants fatigue is a stranger in the house, and the daily tasks are pleasures.  Think of dishwashing and clothes washing without putting your hands in water!  Think of ironing without lifting heavy irons!  Sweeping without dust!  Cooking minus a super-heated kitchen! 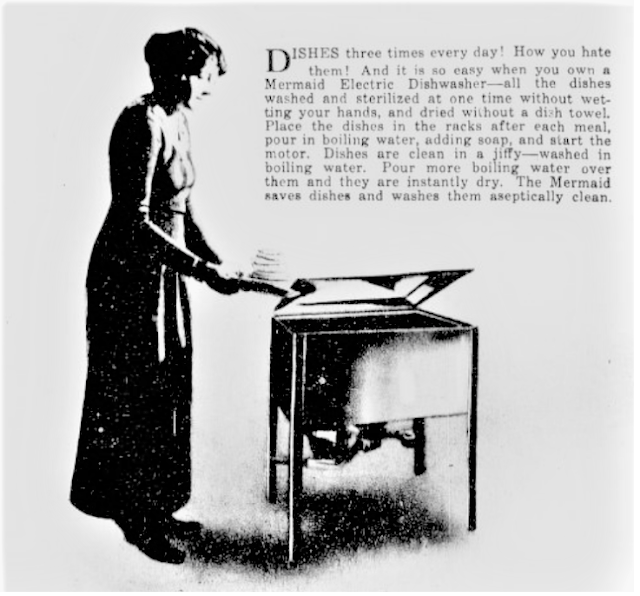 A model demonstrates the Mermaid Electric Dishwasher.  New-York Tribune, October 3, 1920 (copyright expired)
By 1925 the Gregory Cafeteria was in the ground floor.  A renovation by architect Richard Shutkind, completed in 1937, converted the former apartments to "offices and showrooms."  Among the tenants in the 1940's were the Paris Feather Factory and Remotrol Co.
In December 1946 the latter entitled an advertisement "Sail the Seas by Remote Control."  The "seas" were, in fact, a 19" by 10-1/4" tank of "sea blue aluminum" in which toy boats were operated.  The ad said, "By the magic of remote control, the little ships, sail from port to port, past the island lighthouse to enter distant docks.  A simple magnetic control held in the child's hand, under the tank, produces this mysterious motion of ships floating in only 1/2" of water." 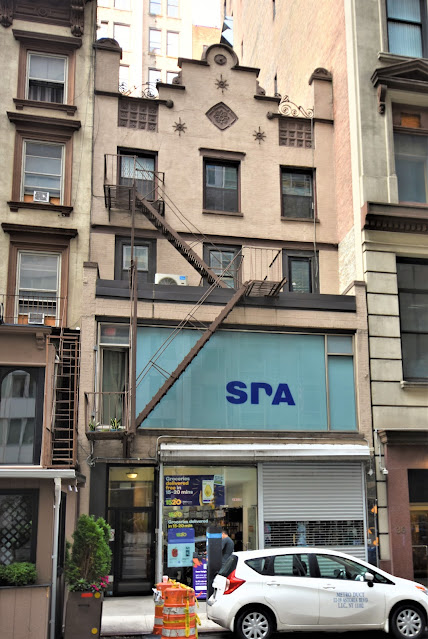 A subsequent remodeling to the building was completed in 1970.  It resulted in one apartment each on the two top floors.  John Just's once elegant home is successfully disguised by numerous make-0vers.  Eugene De Roge's eccentric 1916 design, now painted beige and brown, still captures attention above the rather gruesomely-altered two-story storefront.
photographs by the author
many thanks to reader Ted Leather for suggesting this post
no permission to reuse the content of this blog has been granted to LaptrinhX.com
Posted by Tom Miller at 1:27 AM