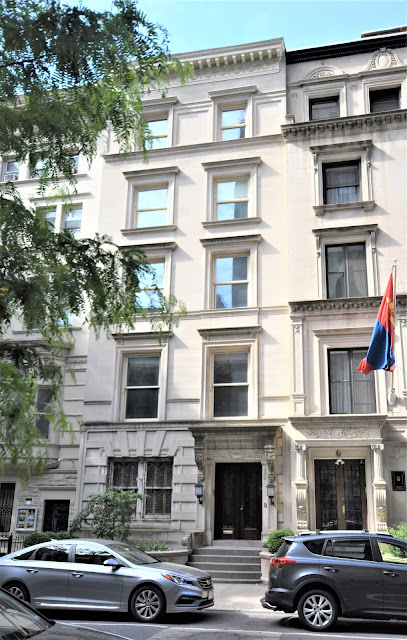 Not only was Richard W. Buckley a partner with Robert McCafferty in the development firm of  McCafferty & Buckley, he was the firm’s architect—a significant cost savings.  In 1895 the partners started construction of seven high-end homes at 4 through 16 East 77th Street.  Unlike the nearly identical high-stoop brownstones erected a generation earlier, each of Buckley’s handsome neo-Renaissance style residences, completed in 1897, was given its own personality.  Perhaps to compensate for the sloop of the street, the two eastern-most houses were designed on the English basement plan, which provided them with high stone stoops. 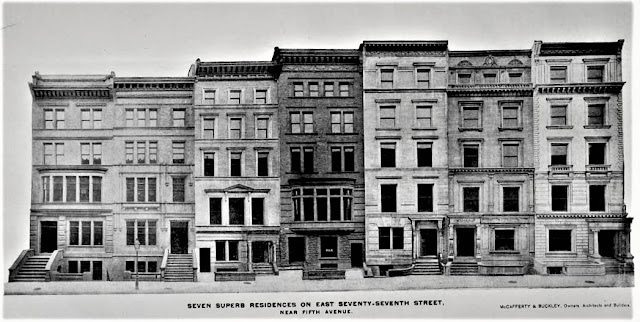 8 East 77th Street is the third from right.  Record & Guide, April 11, 1896 (copyright expired)
Like its neighbors, 8 East 77th Street was 25-feet wide and rose five stories.  An American basement house, its entrance sat above a short stoop.  The restrained ornamentation depended almost entirely on the banded facade of the first floor, Renaissance-inspired carvings around the upper part of the doorway, and a neo-Classical frieze below the cornice.
The house was sold in 1897 to Mary Talcott Penniman, the widow of Samuel Judd Penniman.   Born on January 8, 1841 to Edmund and Harriet Strong Knower, Mary traced her lineage on her mothers side to the Mayflower, and was listed as the "eighth in descent from William Bradford."
Mary had met Samuel J. Penniman on a transatlantic crossing with her mother in 1859.  During that same voyage she and her mother met with the English novelist Anthony Trollope.  The chance meetings would result in her marriage to Penniman and a life-long friendship with the famous author.
Penniman, who was a widower, was an oil merchant and the principal in the Judd Linseed Oil Company.  The newlyweds moved into a house at 44 East 22nd Street.  He died in 1876 at the age of 43, leaving his 36-year-old widow a significant fortune.
Mary lived quietly in the 77th Street house, her name appearing in print most often for her charitable contributions.  Shortly before moving in, for instance, she donated $5,000 to the New York Cancer Hospital "to endow a bed in memory of Samuel J. Penniman and Mrs. Knower," according to The Evening Post.  The value of the gift would be around $157,000 today.
The house was the scene of a socially important wedding on January 15, 1901, when Mary's cousin, Elisa Strong, was married to William V. B. Kip.  The New York Times reported, "The house was beautifully decorated with palms and flowers, pink roses being used in all the rooms save the drawing room on the second floor, where the wedding took place, there the decorations were Bride roses and ferns and palms."  The article hinted at the layout of the Mary's home:

The suite of rooms on the second floor were thrown together and the bridal party, which formed in the library, passed through an aisle formed of broad satin ribbons to the drawing room to a bower of green and white, where the ceremony was performed.

The long list of guests included some of the most prominent families in New York society, like Rhinelander, Livingston, Rutherford, Schieffelin, Kingsland, Rockefeller, Goodrich and de Peyster.
Mary spent her summers in the White Mountains, New Hampshire.  She preferred to stay at fashionable resort hotels rather than to rent or own a cottage.  On July 17, 1921, for instance, the New-York Tribune notified its society page readers that she "is summering at the Profile House."
The aging widow lived quietly on in the house with her servants as the decades passed.  She died on February 13, 1931 at the age of 90 and her funeral was held in the house three days later.
Mary left an estate valued at $1.11 million, according to the Daily News (nearly $21 million in today's money).   Much of it was bequeathed to charitable institutions, but her will was very generous to her servants, as well.  Her personal maid, Hila Dahlgren, for instance, received $25,000 "and personal effects."  It was a Depression Era windfall equal to about $420,000 in today's money.
The 77th Street mansion was sold in 1940 and the new owners announced plans to alter it to apartments.  The completed renovations resulted in two apartments per floor.
Living on the fourth floor in the mid-1950's was Leo Castelli.  Although not an artist, he was a member of the Club, a group founded in 1949 that included William de Kooning, Franz Klein, and Robert Rauschenberg.  Castelli's first venture into art dealing came in 1951, and in 1957 he opened the Leo Castelli Gallery in his apartment here.  According to the Wall Street Journal's Daniel Grant in 2011, through the 1960's and '70's the gallery was the most prominent commercial venue for art in the world.
Living here in the late 1960's was the family of Dr. Guillermo Salazar.  A psychiatrist, he had fled Cuba after having served as Fidel Castro's former Ambassador to Switzerland.  He and his wife, Caroline, had one child, Isabel, who attended the private Miss Hewitt's School.
Now associated with Gracie Square Hospital, Salazar specialized in the treatment of narcotic addicts.  In a tragically ironic twist, Isabel was an addict.  In 1970 Salazar explained she had been introduced to drugs by acquaintances in Central Park when she was just 11.
Not long afterward Isabel dropped out of school "because of her serious drug habit," according to The New York Times.  Her parents understandably panicked when the 12-year-old disappeared on Monday, January 26, 1970.
At the same time police were conducting a citywide search for a man believed to control "teams" of underage narcotic dealers.  The arrest of three heroin peddlers on January 28--one merely 11-years-old--led police to a search of an Upper West Side apartment building.  There, reported The New York Times, Isabel "was found dazed in a hallway."
Caroline Salazar blamed her daughter's addiction on the United States.  "Now Isabel and I are leaving the country forever," she told reporters.  "This is a jungle, this country.  It's going down the drain faster than anyone realizes."  She saw a brighter future for her daughter in Hong Kong. 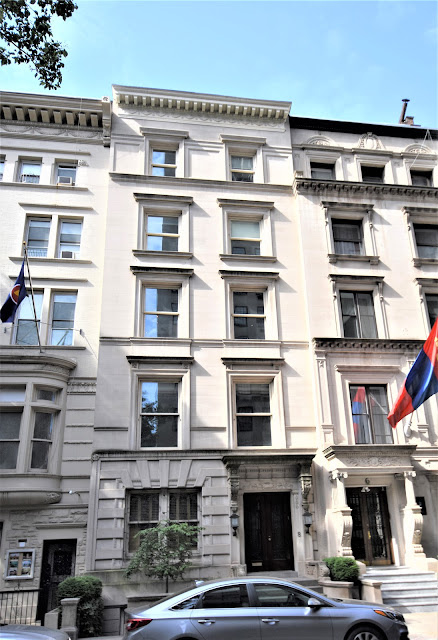 General contractor Steve Mark purchased the 10,000-square-foot mansion in 1999.  Upon the expiration of his tenants' leases he initiated a renovation to return it to a single-family dwelling for his family of six.   The project was officially completed in 2009.
photographs by the author
LaptrinhX.com has no authorization to reuse the content of this blog
Posted by Tom Miller at 1:37 AM