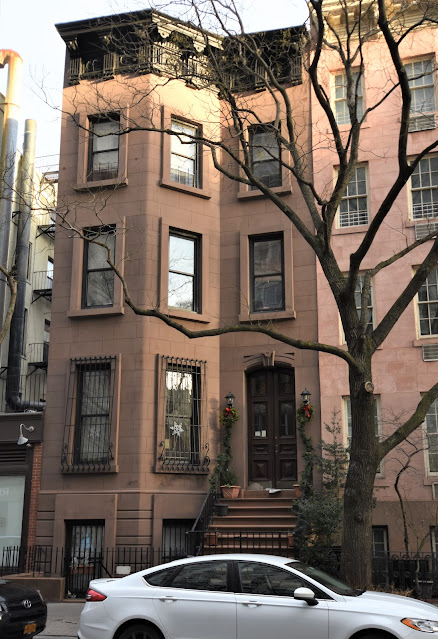 In 1840, James Condie arrived in New York City from Scotland at the age of 18.  The young man brought with him what the American Druggist and Pharmaceutical Record called “a good knowledge of the drug business, having served his apprenticeship in Glasgow.”

Condie opened a pharmacy at No. 165 Eighth Avenue in Chelsea; and then moved to the corner of Ninth Avenue and 22nd Street.  A garden to the rear separated his shop from the Chelsea Presbyterian Church, completed in 1843.  When the church was demolished in 1871, Condie leased the garden plot from Maria T. B. Moore, the daughter of Clement Clarke Moore, and erected a striking 25-foot-wide residence on the site.

Condie had served as his own architect for his drugstore, so it is feasible that he designed 363 West 22nd Street as well.  The name of the architect is uncertain.  Whoever it was, he chose the emerging neo-Grec style, one unusual in Chelsea and much more popular far uptown.

Three stories tall above an English basement, the asymmetrical design featured a full-height angled bay that projected almost to the property line.   The impressive entrance included incised decorations on the pilasters, a keystone and prominent cornice.  The upper corners of the architrave window surrounds were slightly rounded.  A cast metal neo-Grec cornice crowned the residence. The architectural elements survived in 1941.  The beefy cast iron stoop railings and newels were a concession to the Italianate style, more popular in the neighborhood.  via the NYC Department of Records & Information Services.
Condie and his wife, Emma A., had a daughter, also named Emma.  Moving in with the family was Condie's widowed mother, Elizabeth.  They had hardly settled in when Elizabeth died on on July 13, 1871 at the age of 73.  Her funeral was held in the house three days later.
Condie’s corner pharmacy flourished—perhaps in part because of the remedies he purveyed, like “Dr. Underhill’s Union Port from the Croton Point Vineyards.”  It was marketed as “The Pure Juice of the Grape 14 Years Old” in The Sun on September 7, 1879.  Modern pharmacists may wonder if  was less medicinal than it was simply alcoholic.
In 1888, Ella Condie married Charles Rollinson Lamb.  The wildly talented artist and architect was a member of his father's firm, the J. & R. Lamb Studios.  A founder of the National Sculpture Society, he would become best known for his ecclesiastical and monumental architecture (he designed, for instance, the Dewey Arch in Madison Square).  Ella, herself, went on to design stained glass and murals for J. & R. Lamb.
Now empty-nesters, the Condies took in a boarder that year.  Aaron Smith Thomas was a shoe manufacturer whose business was, oddly enough, inconveniently located in Brooklyn.
Condie was retired in 1891 when he made a bad investment.  On December 27 The Press reported, "James Condie, a retired druggist of No. 363 West Twenty-second street, who was one of the syndicate who backed D. C. Newell & Sons, lumber dealers...has filed his schedules."  Condie was liable for $76,464 of that firm's debts--more than $2 million today.  While it did not bankrupt him, it was a serious financial blow.
He transferred the leasehold on the property to Juliet E. Kiedlund.  It appears she leased the house rather than reside in it.  In the mid-1890's Frank Wieseman Glading, a 1894 graduate of Cornell University and an electrical engineer with The Edison Manufacturing Co., listed his address here.
By the turn of the century the family of Rueben R. Smith was living at No. 363.  A druggist, he was, as well, the president of the Manhattan Pharmaceutical Association.
A teenaged girl, Nancy Van Ripen, worked for and lived with the Smiths for a time.  She was among hundreds of New York orphans who were sent out as indentured servants, a practice which its proponents viewed as teaching them a trade, and one which its detractors saw as a form of slavery.
The 17-year-old girl told a jail matron in January 1900, "I was first put out with a party owning a farm somewhere in Jersey.  Then I was sent to a Mrs. Campbell, in Lackawaxen, Pennsylvania.  She died and the articles of indenture were then transferred to a Mrs. Smith, of No. 363 West Twenty-second street, New York."
The Smiths apparently treated the girl kindly, but that ended when she was transferred to the home of Professor De R. Franklin Furman.  "Matters became worse and worse," she said, until "Saturday I decided to end all the trouble by committing suicide."  She was discovered however, and ended up behind bars, suicide being a crime.
After Mary C. Ward leased the house in 1912 it was operated as a rooming or boarding house.  In 1914 dock worker Timothy A. Dempsey lived here, as did James J. Ryan, a probation officer.
On the evening of December 10, 1926 Mildred Connelly was waiting to cross the street at the corner of 22nd Street and Seventh Avenue.  Ice and snow had blocked the vents of the manhole covers, resulting in a build up of gasses.   The New York Times reported, "In all, three manhole covers went up with a loud report.  Miss Connelly was standing on one."  Two other pedestrians were injured in the explosion, but Mildred suffered "a broken leg, lacerations and possibly internal injuries," according to the article.  At the New York Hospital it was said her condition was critical.
Dr. Arcadius Avellanus had rooms here by 1932.  Born Mogyoróssy Arkád in Hungary in 1851, he was a scholar of Latin--reportedly having spoken Latin as a child before mastering Hungarian.  A staunch proponent of keeping Latin a living language, he Latinized his name.  His lectures and speeches were delivered in Latin and he translated Defoe's Robinson Crusoe into the ancient language.  He died in the 22nd Street house at the age of 84 on June 16, 1935. 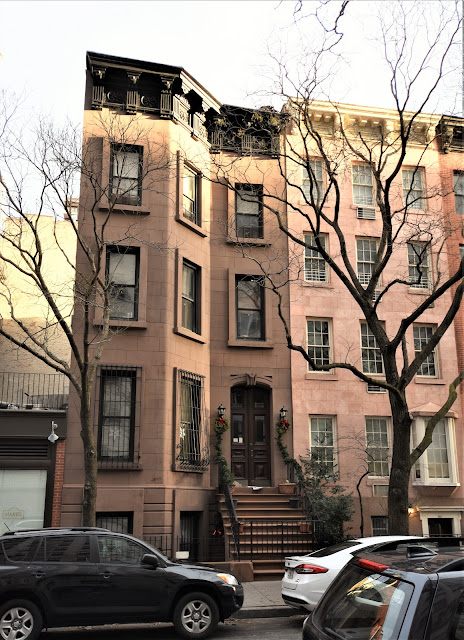 In 1967 the house was converted to apartments, one per floor.  It was possibly at this time that, sadly, the striking neo-Grec details were shaved off, leaving the once remarkable design nearly featureless.
photographs by the author
LaptrinhX.com has no authorization to reuse the content of this blog
Posted by Tom Miller at 1:09 AM