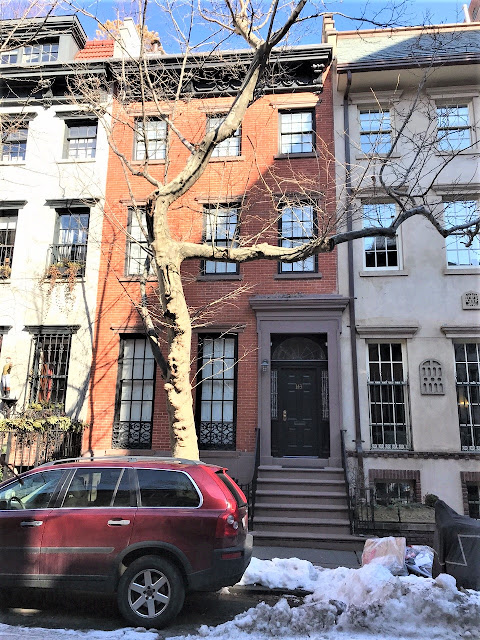 Around 1854 a long row of brick-faced, Greek Revival homes were erected along the northern side of East 19th Street, between Third and Lexington Avenues.  The 20-foot-wide houses were three stories tall and featured molded lintels and an earred entrance enframement.
No. 143 East 19th Street was home to the Samuel R. Mabbatt family in 1855.  Mabbatt was a major coal dealer with locations on Chambers, Franklin and East 23rd Street, and held the position of alderman, as well.  He and his wife, Carolina, had two children, Samuel, Jr. and an infant girl, Julia.
Sadly, Julia died on July 4, 1859, just two months before her fifth birthday.  Her funeral was held in the parlor two days later.
By the mid-1860's the Mabbatts had moved on.  Edward T. and Anne E. Reilly now called 143 East 19th Street home.  The couple had two sons, William and Edward, Jr.  (Edward, born in 1866, was an infant when they moved in.)  Reilly listed his profession as "liquors" until 1868, the term normally used to describe a saloon owner.  He tweaked it to "eatinghouse" the following year, suggesting that he had upgraded his establishment at 14 Broad Street to a more respectable place.
His actions, however, at least on one occasion, indicated otherwise.  On Saturday night, June 24, 1871 Darius W. Lawrence was about to board a stage coach in front of the Grand Central Hotel.  A respected banker, he was a member of Lawrence, Bros. & Co.  Before he could enter the vehicle, he later said, he "was seized by Edward T. Riley" [sic] who "declared that he should drink with him."  When Lawrence declined, "Riley [sic] struck him a violent blow in the forehead, cutting it severely," according to the New-York Daily Tribune.
The newspaper reported, "The assailant, who was intoxicated, was locked up at Police Headquarters, and during the evening smashed all the furniture in his cell."  A much soberer Reilly faced a judge on Sunday morning.
The couple was taking in a boarder in 1873 who was looking for a job.  His advertisement in the New York Daily Herald read:

Edward T. Reilly died around 1877.  Anne and the boys remained in the house for six more years.
The siblings faced off in court in the summer of 1883 over a bizarre incident.  On July 30 the New York Telegram reported, "Edward T. Riley [sic], aged seventeen, was arraigned...at the Tombs Police Court to-day, and was charged by his brother, Wm. F. Riley [sic], of No. 143 East Nineteenth street, with stealing property from him, consisting of silver knives and forks, of the value of $75."
Later that year the house was purchased by policeman Anthony J. Allaire.   He paid Anne Reilly $18,000 for the property--about $474,000 in today's money.  (Anne moved to Tenth Avenue).  It was a tidy sum to for someone earning a policeman's salary.
The family's rather lavish spending was evidenced 11 years later when, on February 3, 1892, the New York Herald reported, "Mrs. A. J. Allaire, of No. 143 East Nineteenth street, gave a dance and supper in honor of her daughters, at Clark's on Twenty-third street, last evening.  Over one hundred guests were present."
In November that year Allaire sold the house to Thomas D. Reilly for $18,500 and moved to a more expensive house uptown (one that cost him the equivalent of more than $665,000 today).
None of Allaire's spending went unnoticed by the New York Senate's Lexow Committee, formed in 1894 to probe into police corruption.  Captain Anthony J. Allaire was summoned to testify before the group on December 19, 1894.  While he firmly denied any wrongdoing, other testimony showed he had been taking bribes from the owners of brothels, gambling houses and other illegal establishments.
Reilly, who was apparently not related to Edward T. Reilly, had been born about a block away in 1850.  A life-long bachelor, he moved into No. 143 East 19th Street with his sisters, Katharine, Mary and Madeline, and a nephew, Joseph Reilly.
Reilly's father had been a horse dealer.  As a young man he had joined the business.   In 1894, a year after moving into his new home, Reilly acquired the Queens County Jockey Club and opened a race track, called the Aqueduct.  The Morning Telegraph later said, "It wasn't much of a track back in 1894--just a six-furlong circuit--when it was opened to the public.  It had been put in shape with the utmost speed to get a share of the racing boom that was then on."
As horse racing became increasingly popular, Reilly bought up land around Aqueduct and enlarged it.  Early in 1904 The Evening World commented, "By careful management he succeeded in building up the track until it ranks with the first-class courses in the metropolis.  Many improvements had been planned for the coming season."
Unfortunately, Reilly would not see those improvements come to pass.  He caught a cold in December 1893 and on New Year's Day "was seized with a hemorrhage," according to The Evening World.  "This weakened him so that he was compelled to take to his bed, and for three weeks he was unable to move about."
It appeared he was convalescing, but he went to the race track to attend to business and the exposure led to pneumonia.  On February 22, 1904 The Evening World began an article saying "Unless something in the nature of a miracle should intervene, Thomas d. Reilly...will not live to see another day."  Three doctors came and went from the house and his sisters were constantly caring for him.   The newspaper said, "Mr. Reilly has thousands of friends in New York.  His home was besieged all day by sorrowful inquirers."
Reilly died on the afternoon of February 23.  The Morning Telegraph lamented, "That he should be called away in the very midst of his triumph and when Aqueduct had won for itself a place assured in the metropolitan circuit is particularly deplorable, but the good work that he has done has survived him and the Queens County Jockey Club will go along--the best monument to his industry and his enterprise."
The funeral, conducted in the 19th Street house on February 26, was attended by "a large number of horsemen," according to The Morning Telegraph.  Afterward a funeral procession went to St. Francis Xavier Church on West 16th Street where "the edifice was filled to the doors with friends of the dead turfman."
The Reilly estate sold No. 143 the following year to Julia Noethen, who leased it to playwright, lyricist and theatrical manager Edgar Selden.  He collaborated with song writer Herbert Ingraham in writing the words to such tunes as "You Needn't Go To College if You've Been to College Inn," and "I Love My Husband, But--Oh, You Henry!"
The house was sold in 1907 and was home to Mrs. Jennie E. Balk in in 1914.  It was purchased in February 1920 by Dr. Frederick J. Fox and his wife Gertrude E. Fox.   Born in Canada in 1878, Fox was a well-known dermatologist.  The couple maintained a summer home in South Salem, New York. 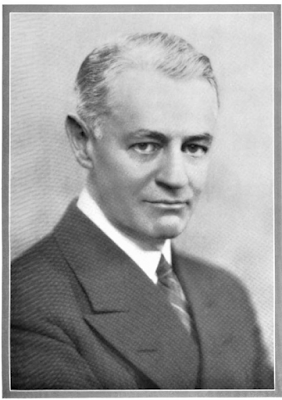 Dr. Frederick J. Fox Encyclopedia of American Biography, 1940
Gertrude was active in the community.  On December 12, 1921, for instance, the New York Herald announced she "is giving a tea at 143 East Nineteenth street next Wednesday afternoon for the recently founded woman's auxiliary of the Gramercy Boys' Club."
The couple rented a room in the house.  In 1921 and '22 their tenant was mezzo-soprano Louise Stallings.  She was a popular radio singer and in 1921 gave a recital at Aeolian Hall, prompting The New York Times to call her "dark and slender, dowered by nature with a low sweet voice, whose honeyed quality would be cloying but for her varied use of it in modest amounts."
Frederick J. Fox sold the house to James E. Fuller in 1927.  Fox's story would end tragically a decade later.  On November 13, 1937 he joined the expedition of African explorer Theodore J. Waldeck in search of aviator Paul A. Redfern who had been lost in the South American jungles in Brazil in 1927.  In January 1938 the four-person party was trapped on Devil's Hole Island on the Cuyuni River by high waters, abandoned by their native porters.  By the time a rescue party reached them, Fox was dead.
In the meantime, Joseph E. Fuller converted the house to accommodate a social club.  On November 15, 1930 The Advocate, an Irish-American newspaper, reported "The Irish Universities Club of America was formally ushered into being on Tuesday evening, Oct. 11."  The purpose of the club was to provide "contact between the Irish universities and their alumni in this country." 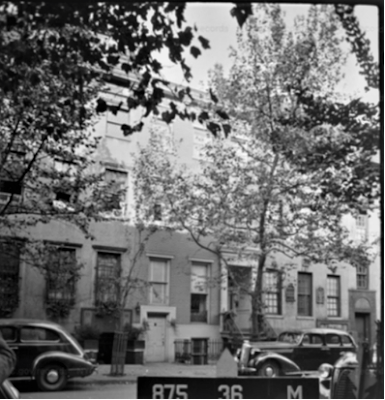 The club's entrance can be seen in this photo from around 1941.  via the NYC Dept of Records & Information Services.
That club gave way to the Old Canteen Club within a few years.  On May 13, 1934 The New York Times reported, "The annual Spring dance under the auspices of the Old Canteen Club will be held Thursday night at the clubhouse of the organization, 143 East Nineteenth Street."  The club had been organized by and for disable veterans of World War I.
The upper floors were rented as unofficial apartments through the decades.  Among the tenants in the late 1950's and early '60's was Ann Elizabeth Newdick Kennedy.  Her fascinating career included having been a fiction writer, and a member of the staff of Field and Stream and managing editor of Motion Picture magazine.  She was a reform leader of the Democratic Party and in 1963 joined the United States Mission to the United Nations as public affairs officer.
In 1997 owner Lynn Wagenknecht and her architect, Thomas Tsue, began a two-year restoration that included removing the club entrance and returning the house to a single-family dwelling.
photograph by the author
Posted by Tom Miller at 2:20 AM