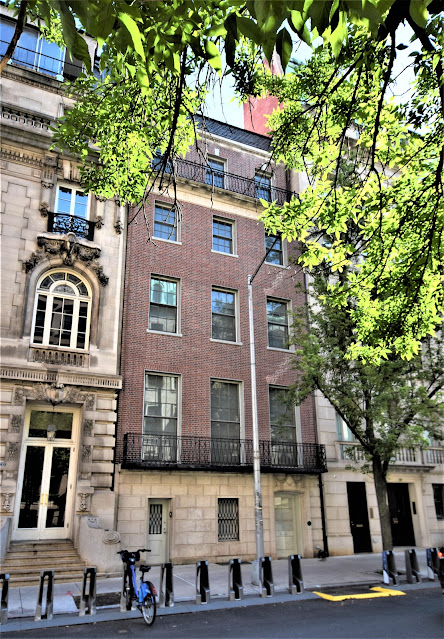 On November 29, 1912 Mrs. Joseph B. Hoyt hosted a reception in her townhouse at 37 East 68th Street for her debutante daughter, Gertrude.  It would be, perhaps, her last significant entertainment in the house.  Less than three months later, on February 8, 1913, the Record & Guide noted, "Another sale of interest was the purchase, by Marshall J. Dodge, of the house at 37 East 68th street, a 4-story structure, which the new owner will occupy.
Indeed, Dodge his family would occupy the 25-foot wide residence, but only after a major facelift.  The brownstone-faced dwelling had been completed around 1871, one of a row of seven identical high-stooped houses.  By now it was architecturally out of fashion.  One-by-one the vintage brownstones around it were being replaced or drastically remodeled into modern, Edwardian homes.
In May 1913 the architectural firm of Delano & Aldrich filed plans for renovations at a projected cost of about $400,000 in today's money.  The stoop was removed, the façade pulled off, and the front moved forward to the property line.  The architects gave the house a rather severe neo-Federal façade.  The upper sections of the tripartite design sat upon a stone base, its only ornamentation being the blind cartouche and swags over the entrance. 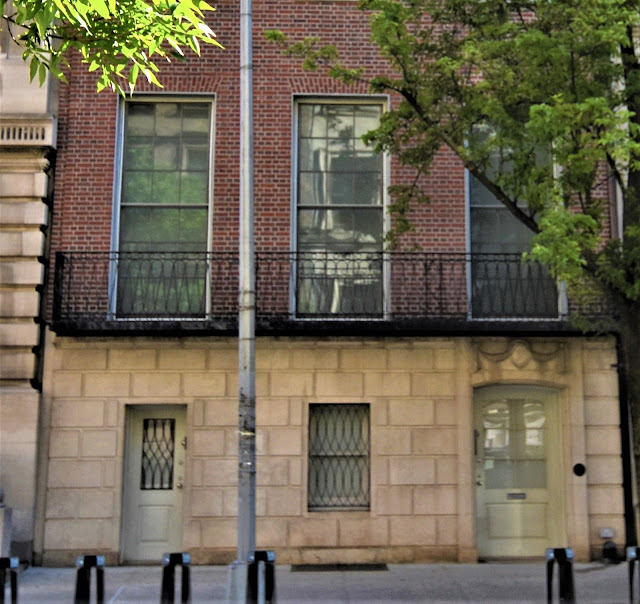 A full-width iron balcony introduced the three-story undecorated mid-section where Flemish bond brick carried on the Federal motif.  The single-story top section sat back from an iron-railed balcony atop a marble cornice.  A shallow, tiled mansard completed the design

American Architect, March 10, 1915 (copyright expired)
Dodge was the grandson of millionaire William Earl Dodge, co-founded of Phelps, Dodge & Co., a and United States congressman.  A graduate of Yale University, Marshall was a partner in the stock brokerage firm of Palmer & Co.  He and his wife, the former Priscilla D. Barnes, had two daughters, Priscilla B. and and Josephine J.
The family maintained a country estate in Lawrence, Long Island.  They were headed there on February 22, 1917 with a houseguest, attorney Lawrence Greer.  Oddly enough, Marshall Dodge was at the wheel rather than a chauffeur.  The New-York Tribune reported, " Mr. Dodge attempted to pass a car in front of him, when the car slid and struck the auto truck with enough force to wreck the dodge car."  Dodge was not injured, but the others were.  The article said, "Mr. Dodge assisted Mrs. Dodge and Mr. Greer into another car and accompanied them to the Presbyterian Hospital.  Mrs. Dodge was found to have a possible fracture of the skull." 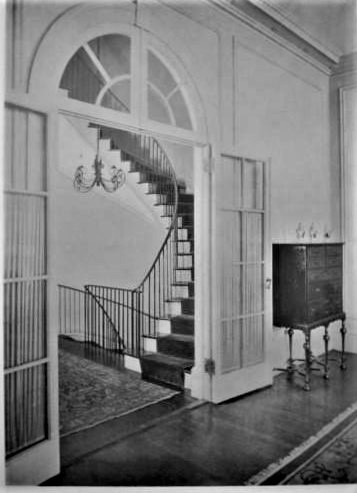 The no-nonsense staircase railing reflects the simplicity of the exterior design.
American Architect, March 10, 1915 (copyright expired)
Rather surprisingly, the Dodges remained in their remodeled home less than four years.   Four months after the accident Marshall Dodge sold it to Herbert Scoville and his wife, the former Orlena Zabriskie.  The Sun noted on June 17, "he is reported to have paid close to $175,000."  The equivalent price today would be about $3.5 million.  In reporting the sale, the Record & Guide pointed out that the house was "one of an entire block of modern houses of the highest grade."
The 38-year-old was a partner in the law firm of Dwight & Scoville.  He and Orlena had been married in October 1909 at the summer home of her parents, Nirvana, in Stamford, Connecticut.  The New York Times commented at the time, "It was the richest wedding Stamford has seen in years...The bride received gifts valued at about half a million dollars."
The couple had two children, Elvia and Herbert, Jr.  Their country estate, Hill House, was near Salisbury, Connecticut and they owned a villa, as well, in Cintra, Portugal.

The Scoville family retained possession of Hill House until 2016.  photo via ctpost.com
The Scovilles were exceptionally caring of their domestic staff.  Decades later Richard Paddock, the grandson of chauffeur Charles Paddock told Alexander Wilburn, "All of the children [of the staff] on the estate got scholarships to school from the Scovilles...If something happened to one of the kids, a health emergency, the Scovilles were right there."  In addition to his salary, the chauffeur's position included a rent-free cottage on the property, and free meals and utilities.
Many of Orlena's entertainments in the 68th Street house went beyond mere teas and gossip.  In May 1930, for instance, The New York Times reported, "Dr. Thomas N. Salmon, Dr. John W. Brannan, Miss Ruth Morgan and others will speak on 'occupational therapy' at the home of Mrs. Herbert Scoville at 37 East Sixty-eighth street, beginning at 4 p.m."  And on February 16, 1932, The Evening Post announced.  "Mrs. Herbert Scoville of 37 East Sixty-eighth street will open her home to the public on Friday, March 4, at 8 o'clock for an evening of music for the benefit of Turtle Bay Music School.  The Brahms quartet will be the entertainers."
Orlena's father, Jersey City banker Cornelius Zabriski, had died in 1905.  Her mother, also named Orlena, moved into a suite at the Hotel Pierre on Fifth Avenue.  She died there at the age of 77 on May 14, 1934.  The funeral was held in the Scoville house  three days later.
Herbert Jr. was a senior at Yale University in January 1937 when his engagement to Ann Curtiss was announced.   The New York Times said, "The wedding is planned for the Summer."
At the time of the announcement Herbert's parents and sister were abroad.  Shockingly, two months later Herbert Sr. was dead at the age of 58.  On March 13, 1937 The New York Times reported, "The death of Herbert Scoville, an attorney, of 37 East Sixty-eighth Street, on Thursday at his villa in Cintra, Portugal, was made known here yesterday."
Society may have been somewhat surprised that Herbert Jr.'s wedding plans went on--most likely because he was headed to England to continue his studies at Cambridge University.  The marriage took place in Norfolk, Connecticut where the bride's parents had a country estate.
Orlena soon sold the 68th Street mansion to the prominent Frederick Ambrose Clark and his wife, Florence.  The couple did not move in, but gently renovated it as "a temporary home and club for servicemen on leave," according to the Otsego Farmer & Republican. 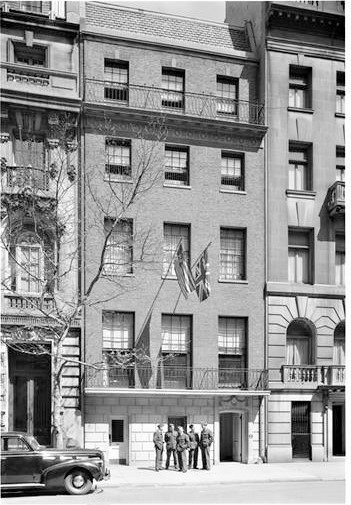 A group of soldiers stand below the American and British flags.  photo by Wurts Bros. from the collection of the Museum of the City of New York.
The facility was a bit more focused than the newspaper suggested.  Called the British Service Club, it catered to British military men who were, no doubt, otherwise lost in the American metropolis. 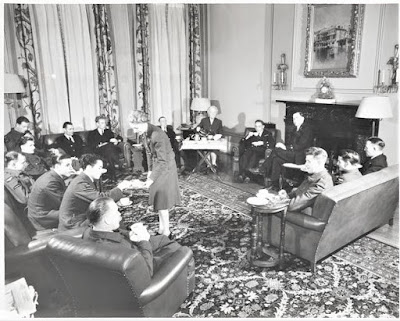 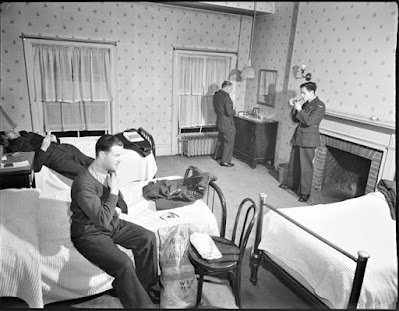 British soldiers and airmen enjoy the amenities of the former Scoville mansion.  photos by Wurts Bros. from the collection of the Museum of the City of New York
Following the war 37 East 68th Street became home to Cancer Care of the National Cancer Foundation.  In 1963 the Brooklyn newspaper Canarsie Courier, described it as "a voluntary organization whose efforts are directed toward the care of terminal cancer patients and their families with financial and counseling aid."
A renovation completed in 1966 returned the mansion to a single family home for attorney Ivan Allen Ezrine and Sarah Erzine.   The ground floor included Ezrine's legal office.  It was apparently legal problems that prompted the Ezrines to leave the house within about five years.  Papers were first served at the house in 1966--shortly after the couple moved in--and later Ezrine was one of six men indicted by a Federal grand jury on 30 counts of stock fraud. 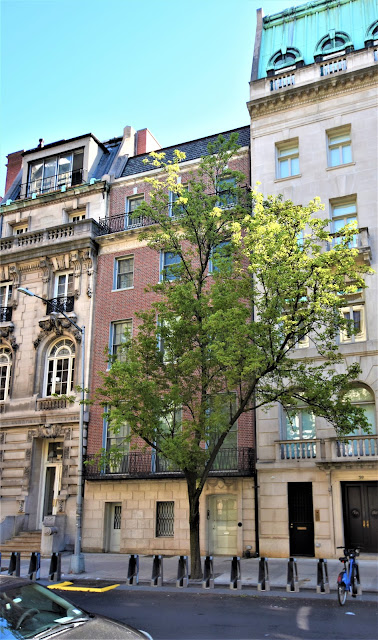 A subsequent renovation completed in 2006 removed the office space, returning the house once again to a true private resident.
photographs by the author
no permission to reuse the content of this blog has been granted to LaptrinhX.com
Posted by Tom Miller at 1:47 AM