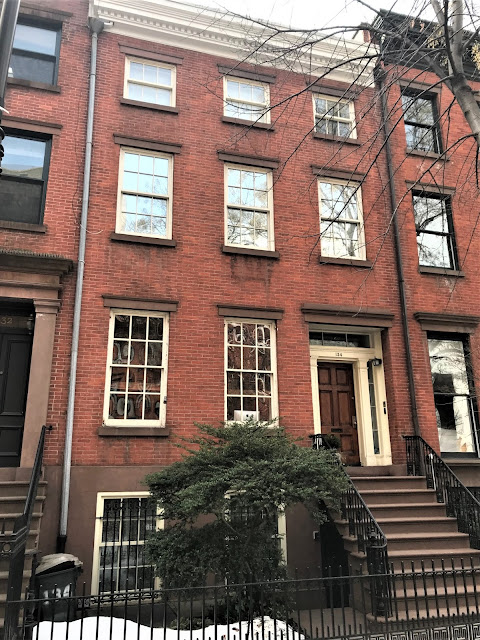 In 1842 the estate of John Remsen erected 12 brick-faced houses on West 13th Street between Sixth and Seventh Avenues.   Among them was No. 110 (renumbered 134 in 1868) which, like its neighbors, rose three floors above a brownstone English basement.  Its openings were trimmed in stone and a handsome dentiled cornice crowned the design.  Most eye-catching was the fine doorway, with its pilasters capped with foliate capitals, side lights, and transom. 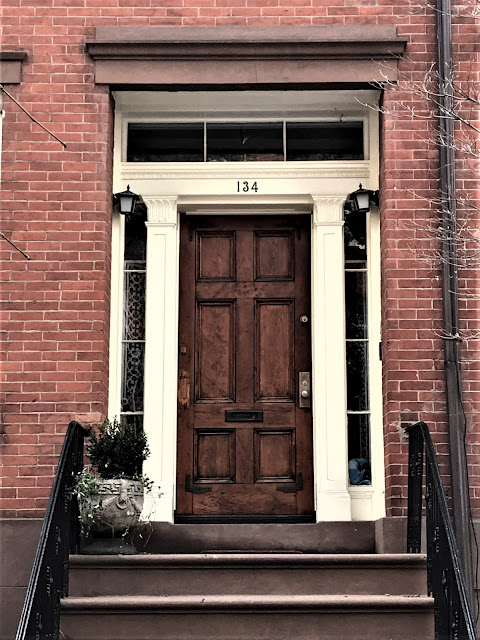 It was purchased by attorney Frederick A. Coe and his wife, the former Anne Eliza Mitchell.  Born in New Hartford, New York in 1816, his office was at No. 52 John Street.  The couple had one daughter, Caroline, who was born the year the house was completed.
The Mitchells remained until early 1847 when, according to the New York Herald, they were "removing from the city."  An auction of their household goods, held on April 23, 1847, hints at the elegance of their home.  Included were "rosewood and mahogany furniture," a suite of Louis XIV parlor furniture, "Egyptian marble toilet tables," and Royal Wilton carpets.  A rosewood piano "made to order by Chickering & Co." had cost Mitchell $600--around $19,500 today.
The house became home to Henry Jarvis Raymond and his family.  Born on January 24, 1820, Raymond had married Juliette Weaver on October 24, 1843.  The couple would have seven children.
A journalist, he was working for Horace Greeley's New-York Tribune when the family moved in.  Newspapers were decidedly and openly politically biased at the time, and Raymond envisioned a newspaper that would report the news from a neutral viewpoint.
In 1851, four years after moving into the West 13th Street house, he made a bold career move.  He convinced George Jones, another New-York Tribune writer, to start their own newspaper.  They formed Raymond, Jones & Company, Inc. which founded The New York Times.  Raymond took the position of the newspaper's first editor. 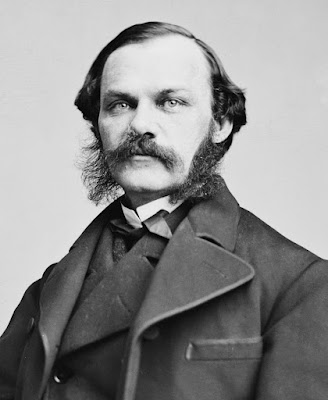 Famed photographer Mathew Brady took this portrait of Henry Jarvis Raymond.  from the collection of the Library of Congress
Raymond successfully balanced his journalistic career with his political aspirations.  In 1850 Raymond, a Whig, was elected to the New York State Assembly, and in 1855 he was elected Lieutenant Governor of New York, a position he held for one year.  His "Address to the People," adopted by the Republican organizing convention in 1856 led to his being called "the godfather of the Republican Party."
In the meantime, Juliette focused attention on worthy causes.  By 1856 she was a manger of The Woman's Hospital, for instance.
The Raymonds left West 13th Street in 1860, selling the house to importer Frederick Pfaff.   It was common for even well-to-do families to take in boarders and on November 21, 1861 an advertisement appeared in the New York Herald offering:

Board--A Private German family desires to let, to one or two single gentlemen, a handsomely furnished Room, with Bedroom adjoining, containing hot and cold water, with or without partial Board.  House has all the modern improvements.

Their two boarders in 1863 were E. Gillher and H. Garver.  That year the Government passed the Enrollment Act of 1863 (also known as the Civil War Military Draft Act).  Every male between the age of 20 and 45 years of age was required to enroll for the draft.  Gillher was drafted on August 18 and Garver's name was called two days later.
The Pfaffs continued to take in two boarders at a time, their ads clearly noting "gentlemen only."  It was a way to ensure that no disreputable woman sullied the reputation of their home.
In 1867 the Pfaff family moved to Staten Island and 134  West 13th Street became home to Thomas and Ann Harrison, and their daughter Catharine Ann.
Catharine fell ill not long after moving into the house and she tragically died September 7, 1869 "after a long illness," according to the New York Herald, at the age of 22.  Less than a month later, on November 3, 1869 Thomas died at the age of 47.  Both their funerals were held in the parlor.
Ann Harrison left in 1872 and an auction of the household furnishings was held that April.  It became home to attorney Henry Major who lived in only a small portion of the house.  On August 19, 1873 he offered:

Unlike its use today, the term "unexceptionable" meant "unobjectionable," or having nothing to take exception to.  His asking rent would equal about $3,000 per month today.
The tenants in 1876 were Albert L. Dodge, a liquor dealer with locations at 295 Canal Street and  419 Broadway, and his wife, Carrie.   Carried died that year on July 7.  Albert remained through 1877.
By the early 1890's the residence was a boarding house run by a Mrs. Moodey.  She made a heartfelt move in 1893 that would have caused most landladies in decorous neighborhoods to think twice.
Two Black teenagers in Baltimore, Sadie Chester and Jennie Jones, sneaked $15 from Jennie's parents, and took a train to New York City to find their fortunes.  The Evening World reported on October 25, 1893 "On arriving here they went to the Colored Mission, in Thirtieth street.  They remained there several days, and, being unable to get work decided to go home."
The girls bought two train tickets and took the ferry to Jersey City where they realized they had lost the tickets.  They had no money left to buy two more tickets.  The Evening World reported, "They remained in the Jersey City station all day, and night Saturday.  On Sunday a colored man took them to the Mount Olive Baptist Church, where an attempt was made to raise money to send them home, but it failed."
Things seemed to be getting better for the girls when Mrs. Moodey read of their plight.  The Evening World explained she "then took the girls home in order to communicate with their parents."  She sent a letter to Baltimore which backfired.  The Jones family sent a telegram to the New York Police "to hold the girls for stealing."  They were arrested and taken to the Tombs Police Court.  They pleaded with the magistrate, "We only borrowed it and were going to send it right back."
The 13th Street house continued to be operated as a boarding house until it was purchased in March 1920 by Arthur M. Wolfson, the principal of the High School of Commerce of the City of New York.  The New York Times commented that he "will remodel."
Wolfson had graduated from Harvard College in 1893 and in 1898 received his Ph.D.  By now he had published two textbooks on history and was a nationally-known educator. 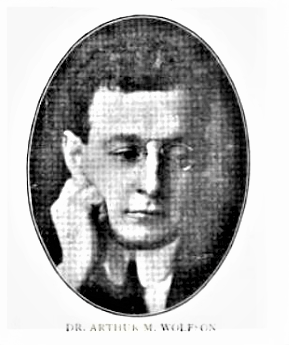 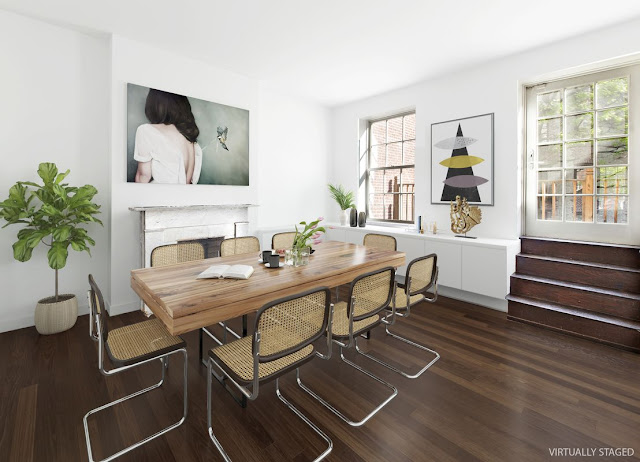 A marble Greek Revival mantel somehow survives.  photo via streeteasy.com
Although little of the 1842 interior details survive, from the
exterior little has changed to the house. 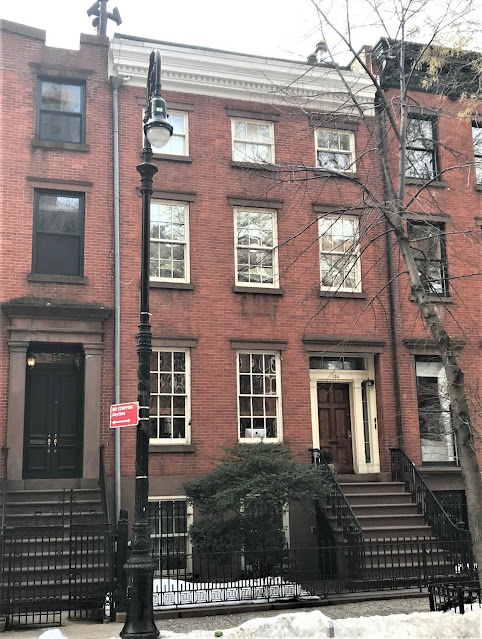 photographs by the author
LaptrinhX.com has no authorization to reuse the content of this blog
Posted by Tom Miller at 1:40 AM