In 1886 the Sisters of Charity had operated the New York Foundling Hospital for 17 years.  At the time of its founding in 1869 the problem of unwanted babies born to unwed mothers was a serious problem; resulting in infants being abandoned on the steps of churches or orphanages, or worse, simply discarded to die.  The work of the nuns saved thousands of lives.

But now they recognized another problem.  Indigent mothers who found meager work were forced to leave their children at home alone or on the streets.  The Sisters of Charity organized the St. John’s Day Nursery where impoverished women could drop off their children while they worked.

At the time, millionaire John D. Crimmins and his family were devout Catholics.  Crimmins not only gave generously to the Church, donating altars, sculptures and paintings to St. Patrick’s Cathedral of which he was a prominent parishioner; but the entire family spent each Christmas Day in white aprons serving dinner to the poor, elderly women at the Little Sisters of the Poor on East 70th Street.

As the wealthy philanthropist planned his upscale private carriage house at No. 225 East 67th Street, he included another next door for the Sisters' new project.  Completed in 1887 the St. John’s Day Nursery was outwardly indistinguishable from the high-end stables along the block.  Like Crimmins’s, it was brick-faced and generally Romanesque Revival in style.  Brownstone trim and a handsome brick corbel table below the cornice added to the visual appeal. 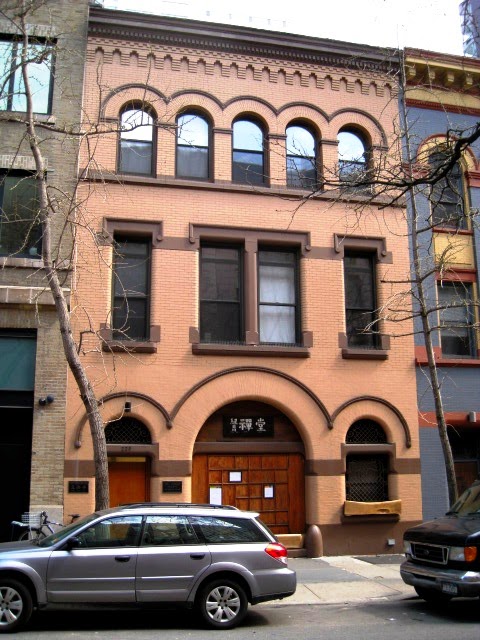 The ground level would provide stable accommodations for the Foundling Hospital while upstairs the Day Nursery had rooms.  On October 30, 1887 The Sun reported on the newly-completed structure. “Sister Irene, Superior of the New York Foundling Asylum, who for a long time back has had greatly at heart the establishment of a day nursery under Catholic management, has charge of the new institution, which is over a large stable built for the use of the Foundling Asylum.”

The newspaper said “The building occupies a full lot of 27x100, is well built of brick with blue stone trimmings, and adjoins one put up for the same purpose in first-class style by Mr. John D. Crimmins.  Access to the upper stories is by wide easy stairs, wainscoted as the building is throughout.”

The New-York Tribune, in announcing that “The nursery enables many mothers to go out and work, while their children are fed, dressed and cared for by charity,” added “The nursery rooms have been given by John D. Crimmins.”  The Sun described the interior arrangements.  “The first and second upper stories form two large, light, and well-ventilated rooms, which can each be divided by sliding doors into large front and back ones.  There is on each story a water closet and a lavatory adjoining to and communicating with the main room in the rear.  The janitor’s dwelling is on the uppermost story.”

Crimmins increased the square footage of the Nursery by dedicating the entire third floor of his carriage house to its use.  A door connected the two buildings at this level.  “This will be used for a refectory and a dormitory, where children can be fed, and, when tired or drowsy, allowed to rest.”  Crimmins installed a bathroom and a range “at his own expense” and paid for the furnishings throughout.

The Sisters of Charity and John Crimmins had carefully selected the location.  While the block was lined with comfortable rowhouses of middle and upper-middle class families, as well as the lavish carriage houses of the wealthy; it bordered on the working class neighborhoods closer to the East River.  The Sun explained “As it is near, on the east, to a populous district inhabited by laboring people, it has before it a prospect of great charitable usefulness.”

The St. John’s Day Nursery was open from 7 a.m. to 7 p.m. and accepted the children of working women “from eighteen months to five years old, without distinction of nationality, creed, or color.”  The New-York Tribune praised the nuns’ work saying “The nursery enables many mothers to go out and work, while their children are fed, dressed and cared for by charity.”  The institution relied solely on donations to keep it running and, therefore, there was an endless stream of bazaars, benefits and other fund raising events.
Some of these were held in the nursery building itself; such as the one on Wednesday, May 16, 1888 or the more inventive “chocolate” and bazaar on November 15, 1889.  For the latter, the nursery rooms were decorated and donated items were sold by chance.  The New York Times reported on the articles of “fancy work” including one show-stopping item.  “Chances were sold on a large pillow of chrysanthemums and lilies, given by Miss Addie Hearn,” it said.  “Among other donations were some worsted articles made by the inmates of the Insane Asylum at Harrison, N. Y.”

At the time of the “chocolate” and bazaar The Times reported that “The number of children rescued from the life of the street during the past year by this nursery is 275.”

By 1892 the Day Nursery was handling 50 children per day and John D. Crimmins remained among its staunchest financial supporters.  On December 27, 1893 the toddlers, none older than five, who received little Christmas at home got it here.  They staged a Christmas pageant of sorts for Archbishop Corrigan “and many society people.”  The Times reported “A large Christmas tree, presented by John D. Crimmins, was loaded down with good things for the children, and the walls of the large hall were hung with evergreens.  The children recited poems and sang cradle songs from the top of a table, which had been transformed into a mimic stage.”

The program was closed by an “intricate march” and after the distribution of gifts the children sat down to a real Christmas dinner.  The Archbishop was especially impressed with a recitation and song by a five-year old German girl “in which a cradle and a doll played an important part.”

In 1902 St. John’s Day Nursery was still handling 50 children per day.  “This means that they were not only kept warm and clean and well fed, but were also taught to eat and sleep at regular hours,” said the New-York Tribune.  The Nursery operated an in-house employment agency of sorts to help mothers find work.

On Wednesdays women were invited to the nursery to sew for the children.  Those who did not want to actively participate could become a patron for $15 a year (about $400 today).  Or, if a person did not want to contribute money; food and fabric for making children’s clothing was always accepted.

Without a doubt the most spectacular benefit held for the nursery was the performance of Cinderella at the Metropolitan Opera House in January 1898.  Deemed by one newspaper as a “monster” production, it included fully 3,000 voices and the “World’s Greatest Artists,” according to one advertisement.  John Crimmins was highly involved in arranging the benefit.  Among the features promised, according to the New-York Tribune on November 27, 1897, were “the marches of all nations, by four hundred young girls; the drill of the American Guards, the grand ballet of roses…and the sparkling revel of fairies, butterflies, fireflies, hornets and bumblebees in which several hundred young women will participate.”

By the turn of the century fewer of the benefits were held in the Day Nursery.  Instead concerts, “euchres,” and dances were held at upscale venues patronized by New York society.  On December 1, 1905 a bazaar—which would have been held above the stable on 67th Street two decades earlier—was held in the Waldorf-Astoria.

Now the nursery had doubled its workload, handling 100 children every day.  The New-York Tribune, in describing what it called “one of the prettiest bazaars of the season,” noted that John D. Crimmins’s daughter was partly in charge of the tea room for the event.

On November 9, 1917 John Crimmins died in his mansion at No. 40 East 68th Street of pneumonia.  Two years later, on October 21, 1919, J. A. Root purchased the Crimmins carriage house at No. 225 for $22,300.  It was now described as a “three story brick garage, apartment and workshop building."  The sale did not bode well for the St. John’s Day Nursery which had used the upper floors of the Crimmins building.

The Sisters sold their aging nursery building to the fabulously wealthy Robert Goelet in October 1922.  He converted it for use as his private garage.  When real estate operator Bradford N. Swett bought it from the Goelet Estate 45 years later, in August 1967, The New York Times mentioned “The garage can hold five cars.  There is an apartment on each of its two upper floors.”  Swett paid $100,000 in cash for the building. 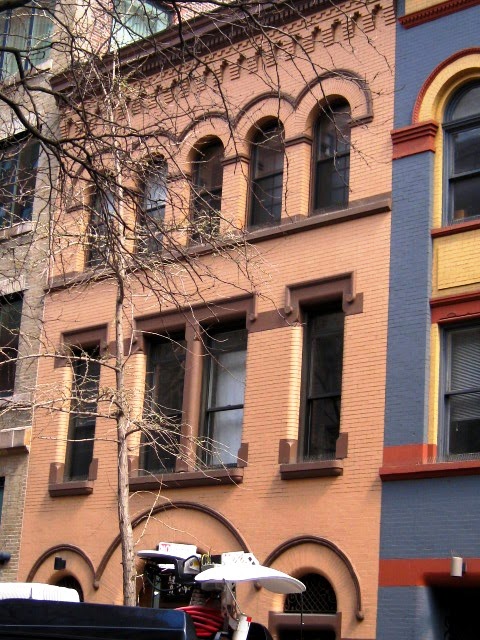 That the charismatic structure at No. 223 East 67th Street had ever been the daytime refuge of needy children was long forgotten.  Within the year the former St. John’s Day Nursery had been converted to the New York Zendo Shobo-Ji (Temple of True Dharma) by the Zen Studies Society.  A half century later the institution, founded in 1956, remains here.  It serves as a Zen practice and training center.