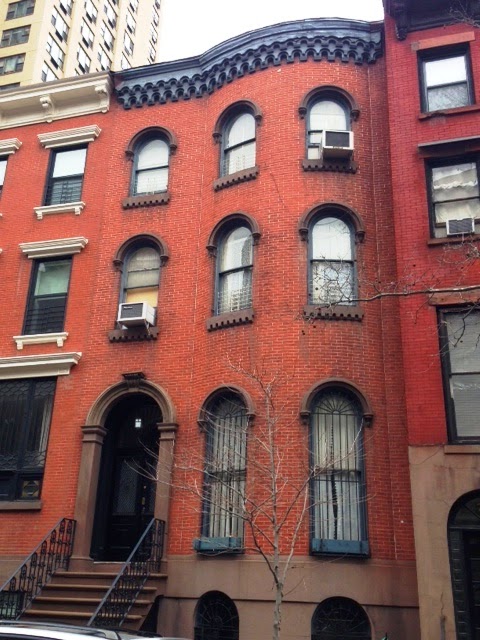 When developer Robert Voorhies began construction of the upscale rowhouse at No. 209 East 17th Street in 1850, he intended that it would stand out from its neighbors—literally.  Completed in 1851, the brick-faced house featured a full-length rounded bay that bulged out from the linear plane created by the flat-faced homes on the block.  But the individual personality of the home would go much farther.


The designer picked and chose among architectural styles; combining unrelated elements with a charming result.  Behind the Italianate cast iron fence and gate the brownstone stoop rose to the entrance.  Here an arched opening more expected in an Italianate home of the period was supported on two simple pilasters similar to those of the Greek Revival doorways along the block.  The windows, too, were surmounted by arched brownstone eyebrows; yet these terminated in more Gothic-inspired ornaments.  The fantastic double-corbelled cornice frieze was echoed in the carved corbels that acted as sills to the windows below—a touch of early Romanesque Revival flavored with Gothic.


Before long rumbles of tension between the South and the North worsened, and in January 1861 the South seceded from the Union.  On July 11, 1863 the nation’s first attempt at a military draft played out in New York with a lottery.  When the 1,200 chosen names were published, it was obvious that only the city’s poor and immigrant population was included—the wealthy had bought exemptions or used their political power to circumvent the draft.  The result was the Draft Riots—a three-day reign of terror and carnage unlike anything seen in the country before.


Innocent people were murdered; and draft offices, newspaper buildings, and the homes and neighborhoods of the city’s black population were burned.  In response the terrified owners of No. 209 had handsome iron grills designed and installed on the basement, parlor floor, and entrance door windows as protection.

The immense scope of Smith’s business was reflected in the several thousand pounds of tea that arrived in port for him around 9:00 p.m. on April 29, 1864.  On the very day that the ship docked, Congressed passed a joint resolution that increased the duty rate on all imports.  The increase in duty on tea would go into effect on July 1.


Smith arrived at the Collector’s office the next day at 2:00 in the afternoon, fully prepared to pay the duty that he had paid for the past four years.  According to court papers later, he was “prepared with the entry, invoice and bill of lading, and with gold sufficient to pay the duties applied to be allowed to enter them for consumption upon payment of a duty of 20 cents per pound.”


The Collector, Hiram Barney, refused the entry unless Smith “would consent to pay a duty of 30 cents per pound.”  An offended Smith walked out and withdrew his application on protest.  While the argument simmered, the tea was placed in a Government warehouse.  There it stayed until the new duty rate legally went into effect.  Now Smith was forced to pay the 30 cents per pound.


The house would change hands twice within the next few years.  The family of Peter Way lived here in 1866; and the Platt Rogers family was in the house at least from 1869 until 1890.


But after Dr. Francis Huber purchased the residence in 1890 for $23,000, the family would be here for a century.  A pediatrician and general practitioner, Huber graduated from the College of Physicians and Surgeons of Columbia University in 1877.  His innovative treatment of croup by the use of a tube was credited with saving “the lives of hundreds of children,” The New York Times would later say.


Dr. Huber and his wife, Ella May, had no children.  She was the daughter of the well-known New York ship-builder Peter Clark.  At just 41 years old Ella was struck with heart failure, dying in the house on Saturday, October 30, 1897.  Her funeral was held in the house two nights later.


Francis Huber would not be alone in the house for long.  He remarried and there would be three sons and a daughter, Olive, who was born in Francis and Viola Huber’s bedroom in 1905.


Also in the house was Huber’s father.  Joseph Huber was a retired bookbinder and an original member of the New York Turn Verein (which was founded in 1850; the same year that construction on the 17th Street house was begun).  The organization was formed by 36 immigrants, almost all of whom had been active in the German revolution of 1848.  Only German was allowed to be spoken in the club.  In January 1906 the 86-year old died in the house.  His funeral was held in his beloved New York Turn Verein.


Perhaps none of Dr. Francis Huber’s treatments would be tenser, or more rewarding, than the operation he performed on young Jacob Miller of No. 40 Essex Street.  Somehow the boy had ingested a nail.  He did not tell his parents despite severe coughing attacks, loss of strength and gradual diminishing health.  After a period of five weeks, his parents took him to several doctors who were puzzled.  Finally an X-ray was taken and the nail was discovered embedded in his right lung.


Huber did the operation with the aid of a fluoroscope.  He made an incision in the windpipe, then “guided by the shadows which X-rays cause when brought in contact with opaque bodies, a delicate, long forceps was introduced into the windpipe and the smaller air tubes.  The shadow of the forceps, marked on the fluoroscope, touched the shadow of the nail, and inside of thirty seconds the impediment was removed through the windpipe,” explained the New-York Tribune on February 28, 1910.


Jacob Miller came out of the operation in excellent shape and was discharged from the hospital within days.


While Huber’s sons were following in his medical footsteps; Olive’s name was in the newspapers for her athleticism.  A student at Hunter College in the early 1920s, she was somewhat of a track star.  On May 16, 1925 The New York Times noted that the Junior Class “scored a total of 40 points to take the point trophy, while Miss Olive Huber scored 13 points to take the individual trophy.”


As it turned out, Olive, too, would have “Dr.” before her name.  She would go on to teach physiology at her Alma Mater; eventually becoming the chair of the department of physiology and health at Hunter College for four decades.  Two of her three brothers, Frank and Henry, would become doctors.  Joseph Huber would eventually move to St. Louis.


In the meantime, in 1933 the elderly Dr. Francis Huber’s health began declining.  A year later, on December 26, he suffered a fatal heart attack in the house.  Huber was 80 years old.


For six decades the unmarried Olive Huber would remain in the family house.  Unafraid to express her opinion on things, when the city was hit with a severe water shortage in 1985 she sided with Mayor Koch’s decision to turn off public fountains.  The fountains of nearby Stuyvesant Square had just been restored and a test of the plumbing was done on April 29.  Twenty-foot sprays blew into the spring air; then the fountains were shut down again.  Some neighbors grumbled, but Olive was pragmatic.


“No complaints,” she told Susan Heller Anderson of The New York Times, “They worked, that’s the important thing.  This is no time, in a water shortage, to turn them back on for good.”


Four years later at a party at the New-York Historical Society she told a reporter that she had “helped friends move and it was so much trouble I decided I’d never do that.”  And so she remained in the East 17th Street house filled with 100 years of family memories.  She mentioned to Ron Alexander of The New York Times that “among her fondest memories are of horse-drawn trolley cars.”


The Huber family’s long history in the house came to an end when Olive died on May 14, 1993.  It was purchased by a widower who lived among Olive’s things with his live-in housekeeper and cook, according to Stacy Horn in her 2001 book Waiting for My Cats to Die: A Morbid Memoir.  “The family took a few of her things but left the rest.” 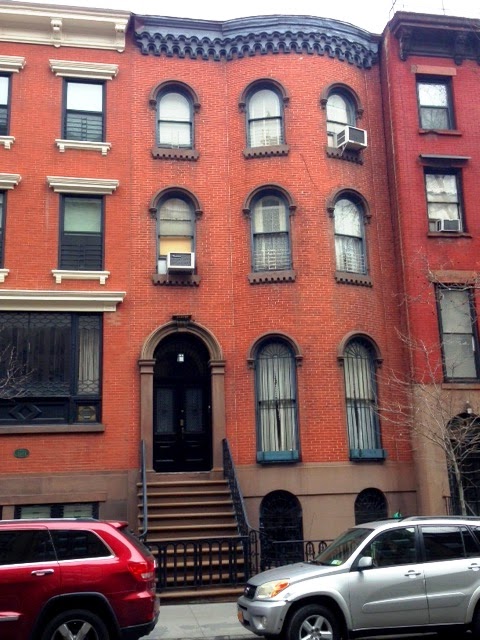 Astonishingly, the Huber family furniture, china, and artwork remained in the house.  Because there had been no change in ownership, the etched glass in the doors, the ceiling plasterwork and the period mantels all survived intact—a sort of private house museum.