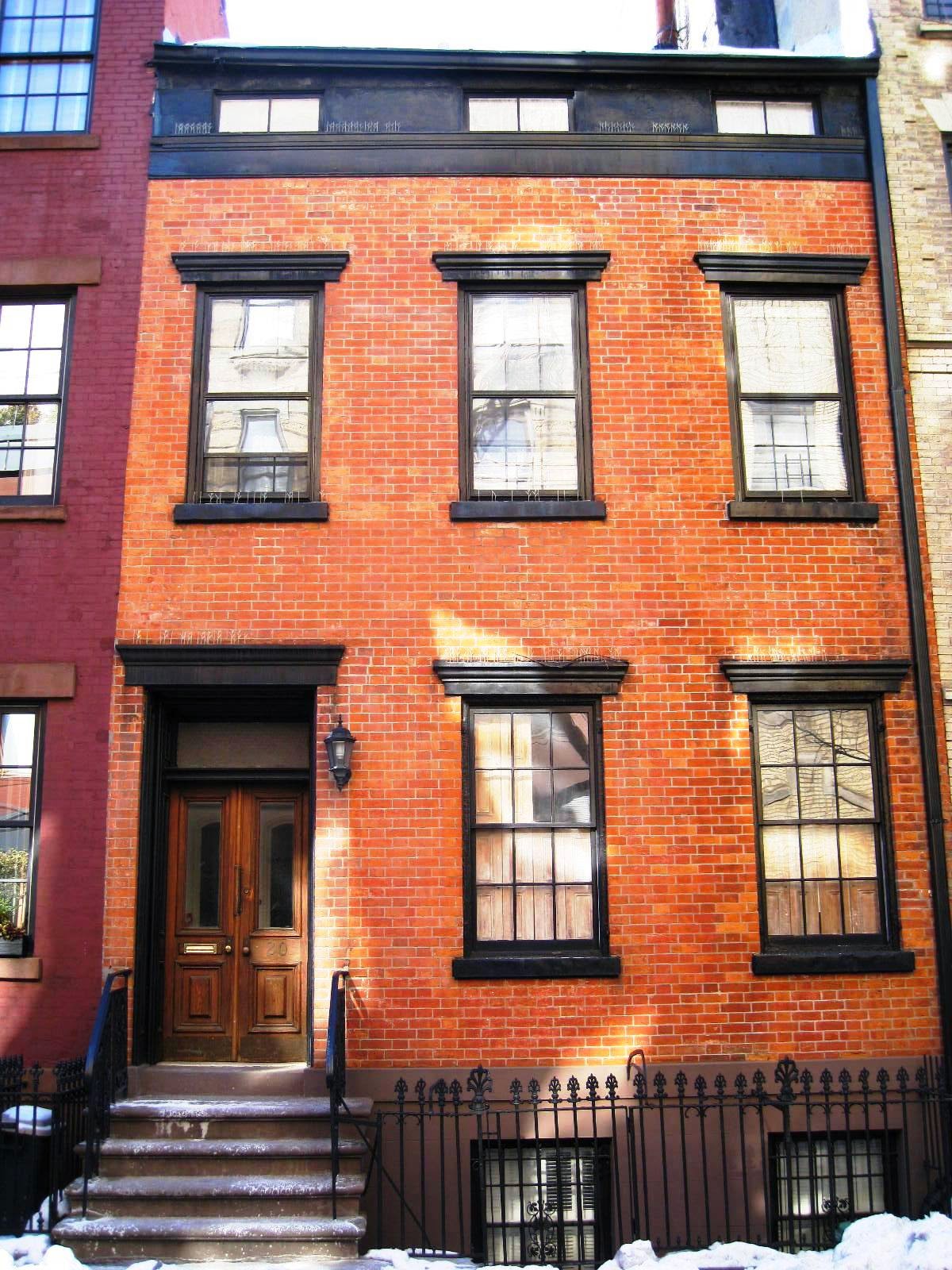 As Greenwich Village experienced a building and population boom in the 1830s, a row of speculative Greek Revival homes were constructed on Leroy Street (occasionally, at the time, written as “Le Roy”) between Bleecker and Bedford Streets.  Stretching from No. 12 to No. 30, they were architecturally up-to-the-minute.  In place of the peaked and dormered roof of the Federal style; the attics here were flat-roofed with small windows cut into the frieze-like fascia board.  Clad in warm, orange-toned brick laid in Flemish bond, they sat on brownstone English basements.  The doorways were deeply recessed and simple iron fencing crowned with anthemions protected the basements.


Among these was No. 20 Leroy Street which was home to the Peter W. Lent family by the mid 1850s.  Now middle-aged, Lent and his wife Catherine had four grown children: sons, Abraham, William and John, and a daughter, Susannah.


Susannah had married John H. Dibble and the couple moved to Santa Clara, California.  The family’s New York-Santa Clara connection was apparently strong.  In 1858 Emma C. Hetty was living in Santa Clara when she frantically tried to find her brother, a sea captain, who had been missing for almost a decade.  She relied on Peter Lent’s son, John, to help in the search.


An advertisement in the New-York Daily Tribune on August 18 that year read “Information Wanted –of Robert S. Parker of New-York City.  She last heard of him in September, 1849.  He was about to sail Captain of the ship Phocion, from New-Bedford for China.  Any information concerning him will be thankfully received by his sister, Emma C. Hetty, Santa Clara California, or John D. Lent, No. 20 Leroy st., New-York City.”


John earned his living as a butcher at the time, and volunteered as a fireman with the Knickerbocker Hose Co. No. 2 at No. 5 Duane Street.  His brother, Abraham was a local politician, serving as alderman.


Susannah died in California on January 23, 1860 in California and six years later almost to the day, on Thursday January 25, 1866 Peter W. Lent died in the Leroy Street house at the age of 80.  His funeral was held in the parlor at 2:00 on the afternoon the following Sunday.


By 1869, possibly through his brother’s influence, John D. Lent had given up his job as a butcher and was working as a “messenger” for the City’s Department of Survey and Inspection of Buildings.  That same year, on December 2, Catherine died at the age of 78.  Her three sons held her funeral in the house three days later.


John retained his position with the Fire Department even as his career with the City advanced.  In 1872 he was earning a comfortable $83.33 a month (about $1500 today) as a Special Inspector and notice server.  Nine years later he held the position of “Subpoena Clerk” with an annual salary of $1311.20.


All the while he lived on in the family house on Leroy Street, until his death in December 1894.  Lent was still active with the fire department at the time of his death and on December 27, 1894 Robert B. Nooney, President of the Association of Exempt Firemen announced that “Members of this association are hereby notified to meet at 20 Leroy st., this Thursday at 3 o’clock P.M., to pay the last tribute of respect to our deceased member, John D. Lent.”


The Lent family retained ownership of the house; but leased it as a boarding house.  Before long it was subject to neglect and abuse.  Somewhat ironically, in 1903 the Department of Buildings, for whom John Lent had worked as an inspector for so many years, declared the house an “unsafe building.”


The necessary repairs were made to the house and it continued to be run as a boarding house.  By now the Greek Revival entrance had been removed in favor of updated double doors and enlarged transom.


In 1915 as the “European War” raged across the Atlantic, the Greenwich Village neighborhood was filled with Italian and German immigrants.  The boarding house on Leroy Street was run by Mrs.Kane.  Among the residents that spring were Germans Adolph Mittelacher; Curt Thummel; Gustav Stahl, a 27-year old German Army reservist; and his roommate Hans Hardenburg.  Another German boarder, Josephine Weir, was later identified as Stahl’s “sweetheart.”


Also living in the house was the 25-year old John Neil Leach, a British citizen.  The son of a judge in Jamaica, Leach spoke German fluently and conversed with the German boarders.  He was employed as First Cabin Steward on the RMS Lusitania.


Few Americans paid serious notice to an obscure advertisement that appeared in the Des Moines Register on April 22, 1915:


NOTICE! Travellers intending to embark on the Atlantic voyage are reminded that a state of war exists between Germany and her allies and Great Britain and her allies; that the zone of war includes the waters adjacent to the British Isles; that, in accordance with formal notice given  by the Imperial German Government, vessels flying the flag of Great Britain, or any of her allies, are liable to destruction in those waters and that travelers sailing in the war zone on ships of Great Britain or her allies do so at their own risk.  IMPERIAL GERMAN EMBASSY WASHINGTON, D.C.


Above the notice was a sketch of the Lusitania and her schedule.


What John Leach did not realize was that he was surrounded by German espionage agents at No. 20 Leroy Street.  On April 30, 1915, the night before the RMS Lusitania left New York, he asked Gustav Stahl to help him take his luggage aboard the ship.  It would be Leach’s last voyage.  On May 7 a German U-Boat torpedoed and sank the ocean liner.


Gustav Stahl signed sworn statements saying that the Lusitania was armed.  He told the German Embassy that when he went aboard with Leach, “I saw two guns of twelve to fifteen centimeters.  They were covered with leather, but the barrel was distinctly to be seen.”  He testified that he looked under the covers and was able to ascertain the caliber and “that the guns were mounted on deck on wooden blocks.”


Josephine Weir chimed in, swearing that when she asked Leach about the danger of sailing on the Lusitania, he said “Oh, I am not afraid.  We have four big brightly polished copper guns.”


The affidavits were supplied by the Embassy to the U.S. State Department in response to President Wilson’s denouncement of the act.


The German agents would not remain long on Leroy Street.  Within a month Stahl was exposed as an employee of the German Government and was wanted for perjury.  By June 10 Hans Hardenburg had been arrested in Cincinnati but Stahle had “disappeared almost completely,” said The Sun.


Gustav Stahl was found and on June 19 was indicted for perjury by a Grand Jury.


The peace of normally-quiet Leroy Street was broken for weeks as reporters and investigators swarmed No. 20, the unimposing brick house that had become a nest of spies.


The Lent Estate retained possession of the residence until May 21, 1921 when it was sold to Mrs. E. De Rosa.  She turned it over three weeks later, selling it to E. De Stilo and A. Di Lonardo. 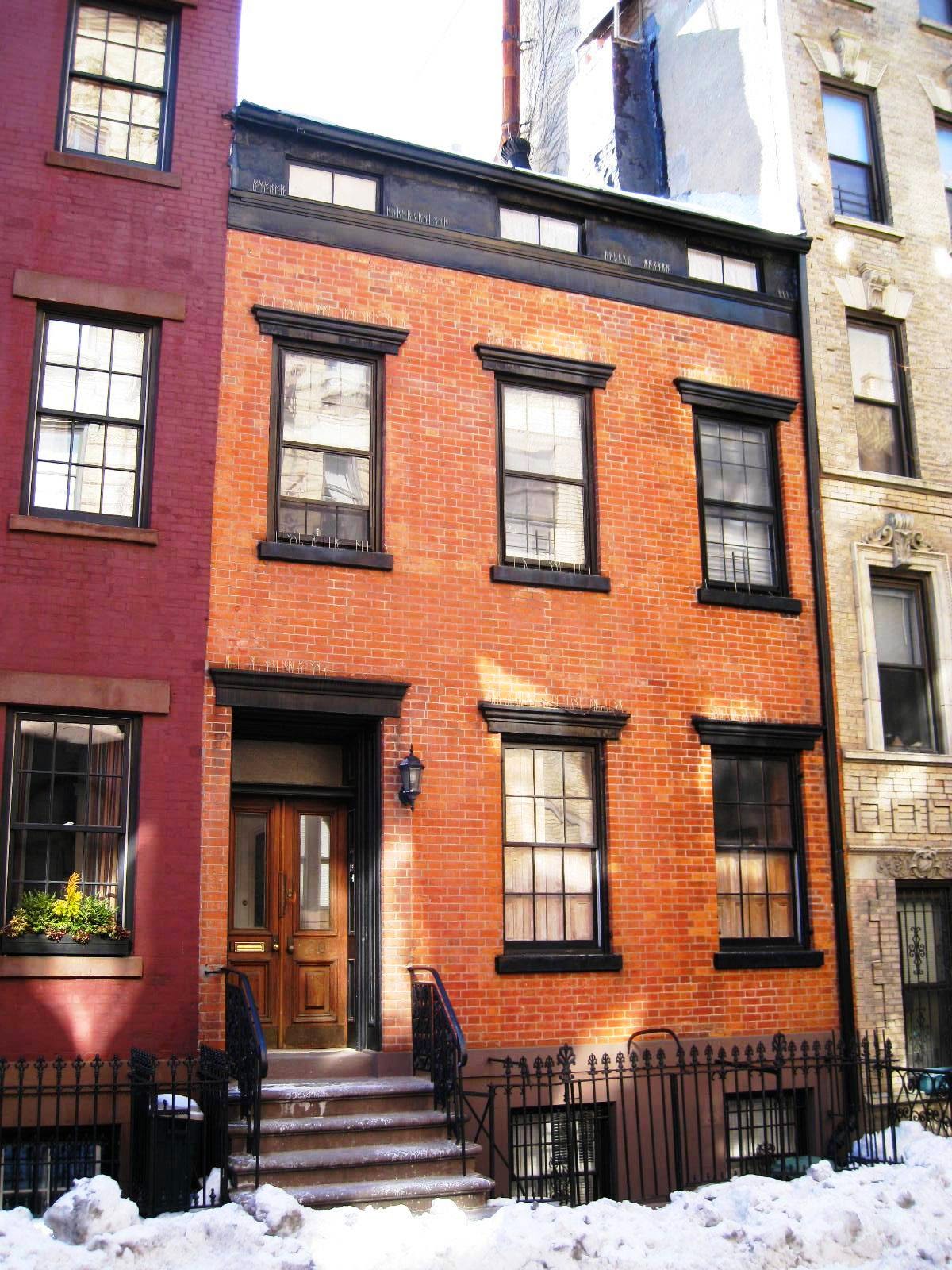 Never again would No. 20 bring attention to Leroy Street.  It slipped quietly back into the fabric of the neighborhood.  Today it has changed little from the turn of the century, successfully hiding its shocking role in the sinking of a ship that drew the country into World War.

photographs taken by the author
Posted by Tom Miller at 3:24 AM