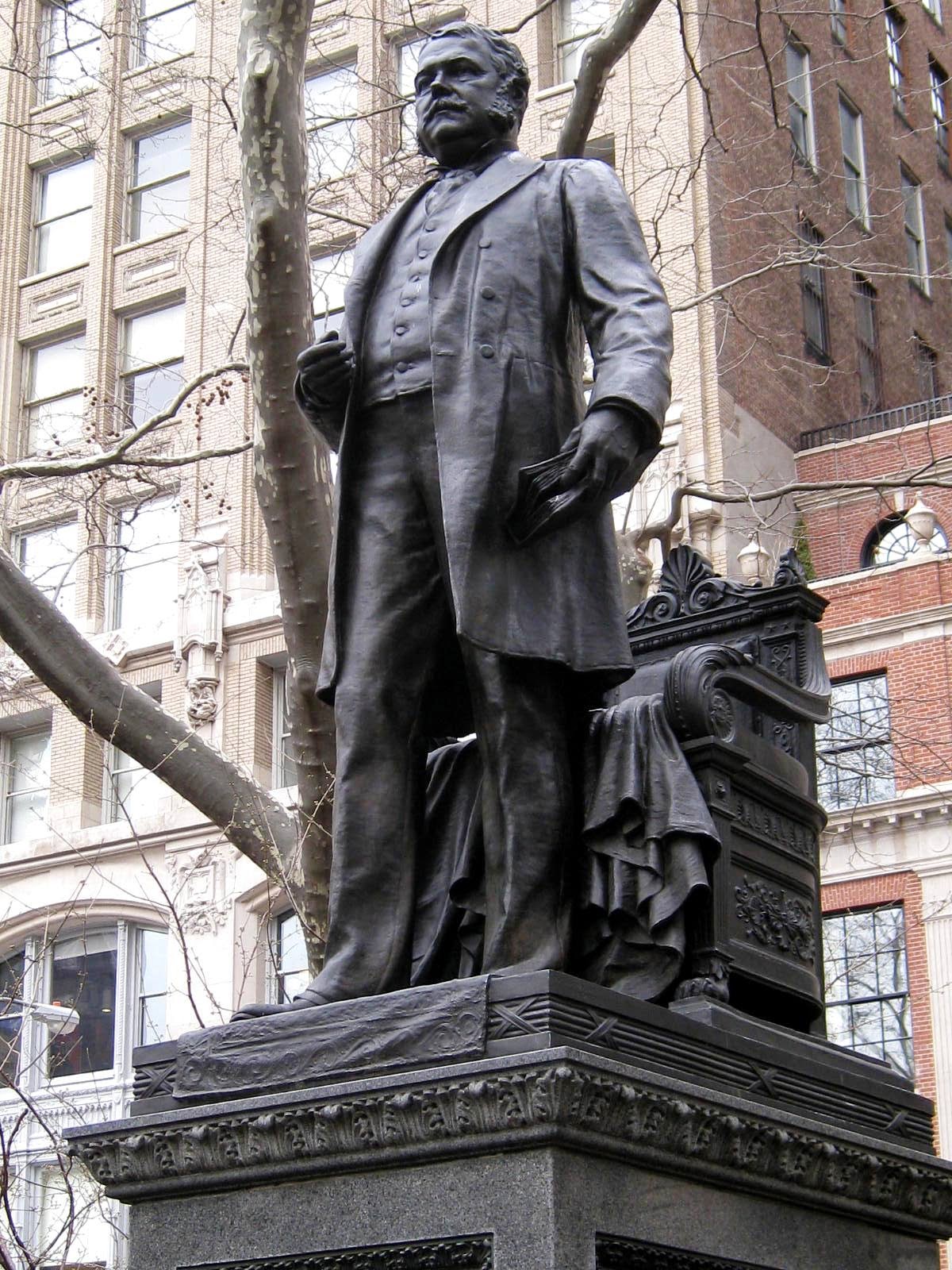 On November 18, 1886 Chester A. Arthur died in his beloved home on Lexington Avenue.  He had became the 21st President of the United States when James A. Garfield was assassinated five years earlier.  Within six months of his death a committee had been formed to erect a statue of the former President.  Interestingly enough, the statue being discussed was intended “to distinguish his grave in the Rural Cemetery near Albany,” as explained by The Sun on May 7, 1887.


At the first meeting, held in the Chamber of Commerce, “It was then voted that not more than $10,000 should be expended for this purpose,” according to the newspaper.  But by the time of the next meeting, just a few weeks later on May 6, The Sun said “Already more money had been offered than was needed, and many gentlemen who had not been present at the first meeting were anxious to contribute.”


With an excess of funds and many other wealthy citizens eager to contribute to a memorial, a second committee was chosen “to take such other action as might be necessary to erect a statue of Arthur in this City.”  Empowered with the influx of funds, committee president Cornelius Bliss estimated the group could spent three times as much on the New York City statue as it put aside for the Albany monument.  The New-York Tribune reported on May 7 “The statue, it is expected, will cost about $30,000.”


As funds poured in, the committee selected Ephraiam Keyser as its sculptor.  Five long years later the nine-foot high clay model of the statue was ready for exhibition.  “The former President is represented in the act of speaking at a Cabinet meeting,” reported the New-York Tribune on April 13, 1892.  “He has a document folded in his left hand, which is hanging by his side.  He has just taken off his glasses and is making a gesture with them in his right hand.  The likeness is said to be excellent, and the pose easy and dignified.”


The New York Times added, “The figure is erect, the shoulders are thrown back, and one foot is thrust ahead of the other.  The Prince Albert coat is buttoned close to the figure, the right arm is bent at right angles at the elbow, and the fingers toy with the eyeglasses…The bared head is thrown slightly backward, and the eyes gaze out on an ascending plane.”


Casting and finishing the bronze statue would take about four months.  All that stood in the way was the approval of the committee.  “Sculptor Keyser will adopt whatever suggestions as to minor changes in the details of the figure are made by members of the committee, and the statue will then be cast in bronze.”


Perhaps Keyser’s downfall was his over-the-top design of the base.  “There was a large circular foundation, and in front of the statue of Arthur were two female figures, one on either side, bearing aloft a globe meant to inclose a lamp or an electric light,” said The New York Times.


The work on the statue went ahead and on December 26, 1892 it was exhibited in the foundry of Henry Bonnard Bronze Company at No. 430 West 16th Street.  “The statue is nine feet two inches high and the weight is 1,800 pounds,” reported The Evening World the following day.  “It has been cast in one piece with the exception of the plinth.”


The statue was intended to be erected in the traffic circle at Central Park, at Fifth Avenue and 59th Streets.  The Park Commissioners visited the foundry on January 13, 1892 and were far less pleased than the statue committee.


“We have looked carefully over the statue of the late President Arthur, and we are compelled to report that the work is, in our opinion, not equal to the average of the sculpture in the Park, and therefore cannot recommend it to the Park Board.  We recommend that an effort be made to raise [the] standard of accepted work hereafter.”


Keyser received the news and commented “It must be pretty bad, if it is as bad as that.”


Exactly one month later, on February 13, 1893, The Sun chimed in on the side of the Park Commissioners.  “The rejection of the Arthur statue is, or should be, the beginning of a new era in the administration of park affairs—an era of discrimination, judgment, and good taste in all that concerns public art.”


On June 10, 1899, six years after the statue was rejected, the New-York Tribune wrote “So little noise was made over the work that it sank out of the sight of the general public, and no doubt many persons will be surprised to hear that the statue will be unveiled in Madison Square next Tuesday afternoon.”


The newspaper made no mention of the sculpture’s critical failure, or that in the meantime the committee had commissioned George Edwin Bissell to start from scratch.  Somewhat surprisingly, the now-acceptable work by Bissell was a near copy of Keyser’s statue.  Even the hand-held eyeglasses carried over to the new design.  The chair behind the figure “is a fac-simile of one he used when in the White House,” reported the Tribune.


The monument was unveiled on June 13, 1899.  It was a rather understated affair considering the prominence of the honoree.  “The ceremony attending the unveiling was brief,” reported The Sun the next day.  “Two or three hundred invited guests sat in the chairs placed around the platform which was erected in front of the statue.” 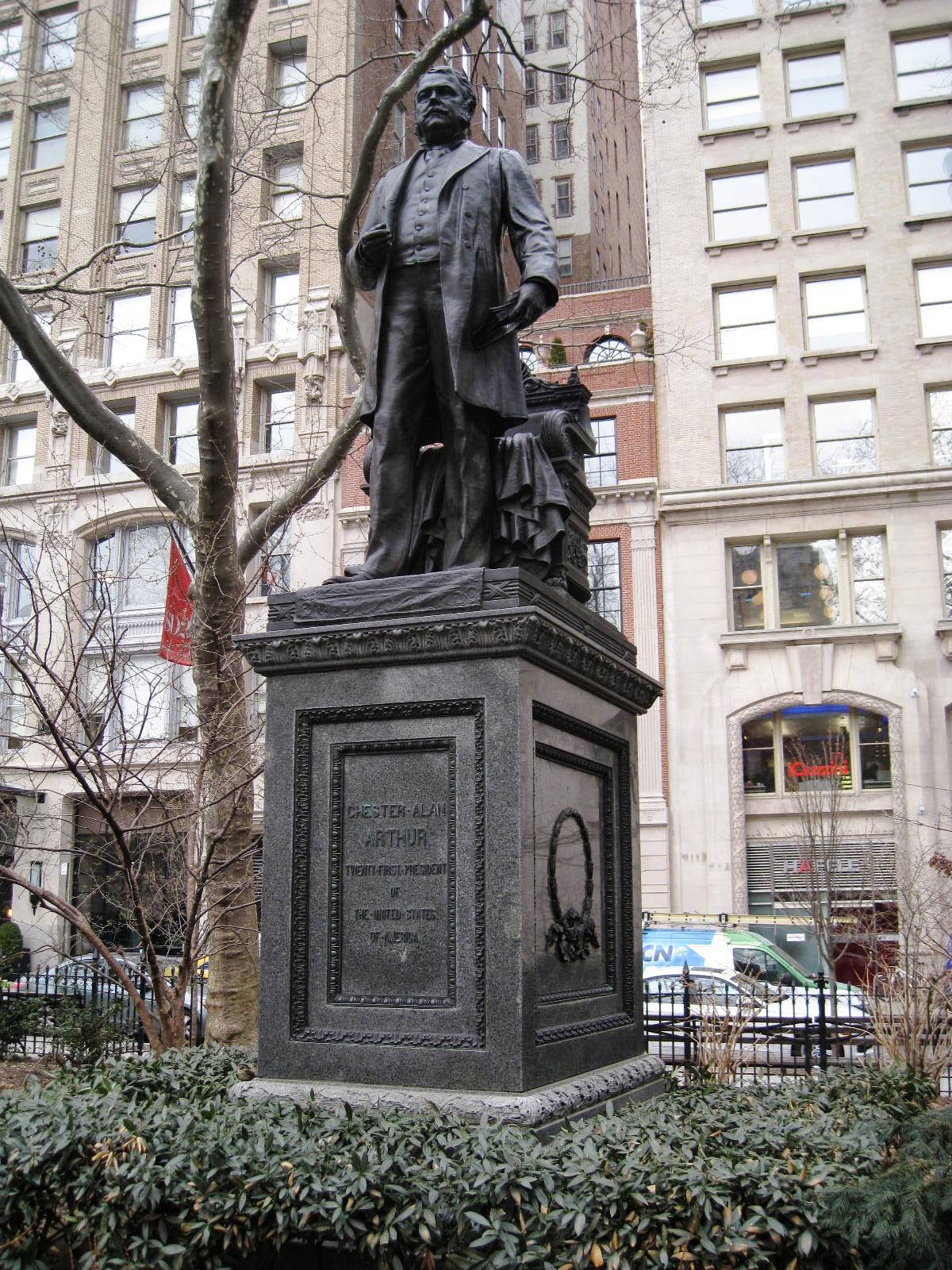 The most noticeable difference between the Keyser monument and the completed Bissell design was the base, designed by esteemed architect James Brown Lord.  The New-York Tribune described the restrained pedestal as “of polished Quincy granite, eight feet high, surmounted by a plinth one foot high.  The general aspect is one of repose and dignity, and in conformity with the effort which has been made in this direction is the simple inscription which will [appears] on the pedestal: Chester Alan Arthur.  Twenty-first President of the United States of America.”


Not long after the unveiling, vandals climbed the statue and removed the bronze eyeglasses of the President.  George E. Bissell recast the spectacles and these, too, were promptly stolen.  They lasted until April 1912.


Bissell told The New York Times “A third pair of rims were then modeled and cast in bronze, and these were placed securely in the hand, and now these have been stolen, making the hand an enigma as to its pose.”


The Times agreed, saying “The fact that something is missing about the statue is plain to any one.  In his left hand the President holds a half open book, while the position of the right and the way the fingers are held indicates the article which is missing.”


Bissell, whom The New York Times referred to as “the venerable sculptor,” was annoyed.  “He suggests that it might be a good thing to have policemen watch the city statues at night, if no other way can be found of protecting them from those whom the police now call ‘the statue thieves,’” reported the newspaper on April 5, 1912. 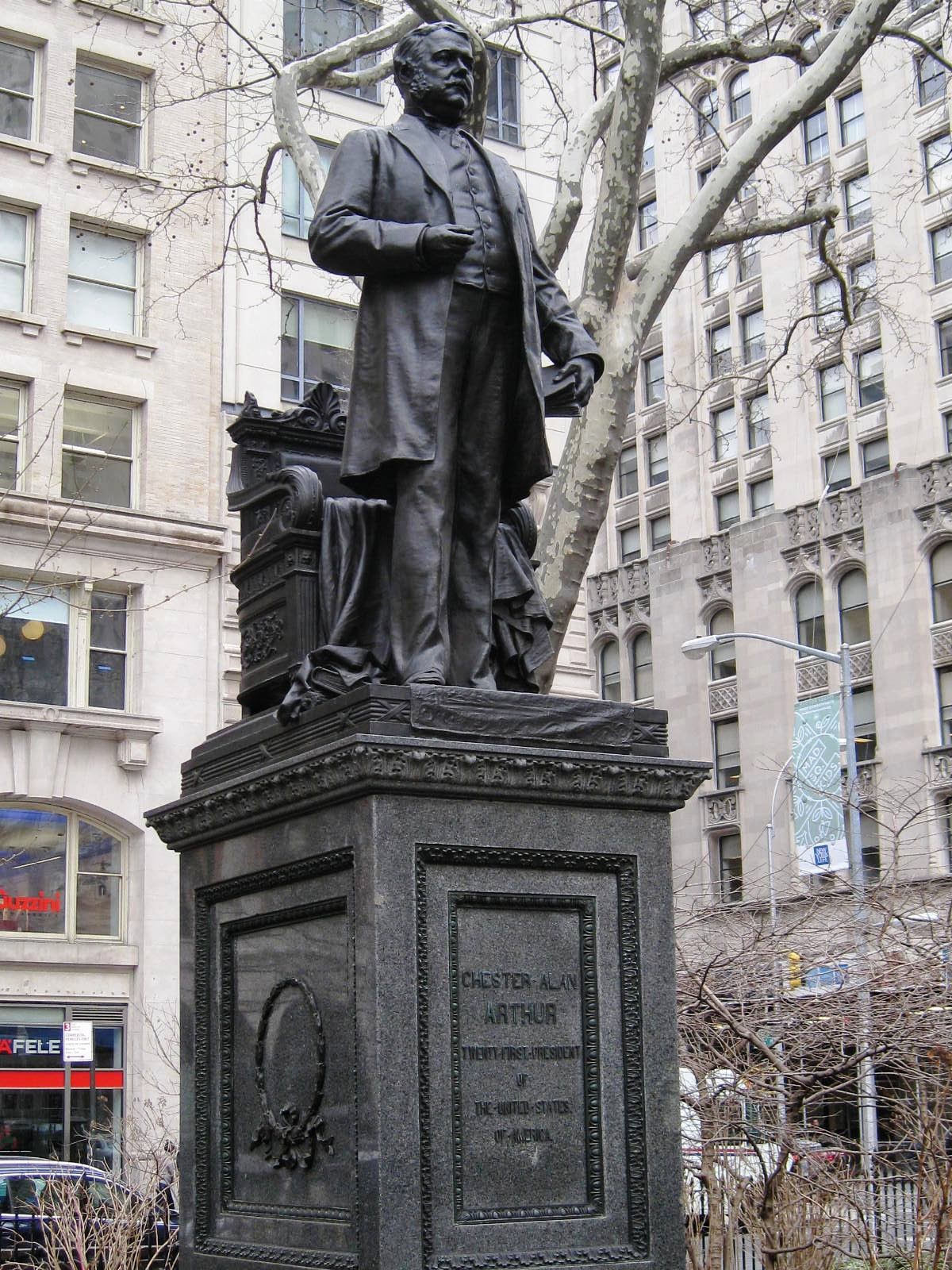 More than a century after Chester A. Arthur’s bronze likeness lost its third pair of eyeglasses his right hand remains empty.  Apparently the President will never get a fourth pair.