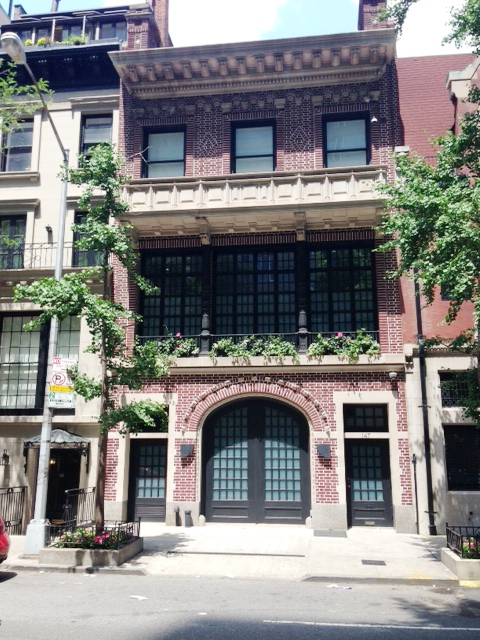 In 1880, when Heber R. Bishop hired architect John Correja to design his private carriage house at No. 137 East 69th Street (later renumbered 147), the block between Lexington and Third Avenues was mostly undeveloped.  The millionaire lived three blocks to the west, at No. 811 Fifth Avenue, at the corner of 69th Street across from Central Park.  The location of his personal stable was conveniently close yet distant enough away to eliminate the problem of noise and smells.


The 40-year old Bishop was already retired when he moved into his Fifth Avenue mansion and erected the carriage house on 69th Street.   Having started out in business at the age of 19, he traveled to Remedios, Cuba a few years later, establishing the sugar business of Bishop & Co.  By 1876 when he returned to New York City to enjoy his wealth and retirement, he was a member of the Chamber of Commerce; a Director of the Chicago, Rock Island and Pacific Railroad Company; of the Chandler Iron Company; the Metropolitan Trust Company of New York; the Lackawanna Iron and Steel Company; and the Lackawanna Steel Company.


He now turned his attention to more leisurely pursuits (he was a member of more than a dozen exclusive clubs, including the New York Yacht Club, the Union Club, and the Metropolitan), like the expansion of his massive Hudson River mansion at Irvington, New York.


The three story carriage house on East 69th Street, like similar private facilities, housed Bishop’s horses and various vehicles downstairs and provided housing above for grooms.   Typical of carriage house design, a large central bay door was flanked by two entrances—one for the upstairs and another that led into the stable area.


Bishop’s Irvington estate was one of the showplaces of the Hudson River.  The New York Times called it “one of the stateliest mansions on the Hudson River—a lovely home, in a position commanding a superb view of the broad Tappan Zee, furnished richly and comfortably, and sheltering one of the most valuable collections of pictures in the country.”


On April 15, 1878 at 5:00 in the morning Heber Bishop received a telegram that his upstate mansion was ablaze.  The house burned for six hours before being reduced to a smoldering ruin.  Of the eighty paintings inside, only twenty-five were rescued.  The Times remarked that “The house and its furniture may be replaced, but the loss of the pictures can never be made good.”  Included in the lost masterpieces was Murrillo’s “Annunciation”—a 10 by 7 foot painting formerly owned by Queen Isabella II assessed at around $40,000 (about $850,000 today).


Bishop’s spirits may have been raised a bit in 1899 when he wintered in London, leasing Houghton Hall from Lord Cholmondeley.  He scored a social coup back home when newspapers reported that his house guest for two days, from December 11 to the 13th, would be the Prince of Wales.  The New York Times remarked that “Elaborate preparations have been made to entertain his Royal Highness.”


The millionaire’s health would soon fail, however, and on December 10, 1902 he died at his Fifth Avenue mansion following an extended illness.  His $3.5 million estate went mostly to his family; however his famous jade collection was bequeathed to the Metropolitan Museum of Art.


Earlier that year Bishop had sold the East 69th Street carriage house to James Gayley, Vice-President of the United States Steel Corporation, for $55,000.   Gayley extended the building to the rear that year.


The purchase made perfect sense.  The previous year Gayley had moved into James A. Burden Jr.’s former mansion at 8 East 69th Street; just around the corner from Heber Bishop’s home.   Gayley would use the carriage house for a decade before selling it in 1912 to Stephen C. Clark.

Clark quickly resold the property to railroad tycoon Arthur C. James who was planning his own 69th Street mansion at the time.   A railroad industrialist, he was also had enormous holdings in silver, copper and gold mines.  Five years earlier his personal fortune ballooned when he inherited $26 million of his father’s estate.


The carriage house would be convenient to the mansion he was erecting at No. 39 East 69th Street at the corner of Park Avenue.   Completed in 1914, The Times said it was “one of the most elaborate private mansions in the city.  All the bedrooms on the third floor opened on a solarium filled with orchids and other rare blooms.”


The James and his wife Harriett summered at Beacon Hill, their Newport estate that included the ten-acre Blue Gardens.  Despite his astounding wealth, James shunned publicity.  The New York Times would later say of him “The Goulds, the Hills, the Harrimans, whose names are known to all schoolboys, never controlled half as much trackage…He was one of the ten or twelve richest men in the country in a list including the Rockefellers, Morgans, Fords, Harrimans and Whitneys, yet all their names were better known than his.  He was a good camera subject, with his big physique and full beard, but the papers seldom carried his picture.”


While the Park Avenue mansion was rising, James commissioned architects Barney & Colt to renovate the aging Victorian carriage house.  A completely new façade was installed and the stable was converted to a garage.  The architects faced the structure in Flemish-bond red brick and added a dramatic wall of multi-paned windows at the second floor.  A limestone balcony stretched the width of the building at the third floor, complimented by a stone cornice above.  The residential interiors were updated for the garage-related servants. 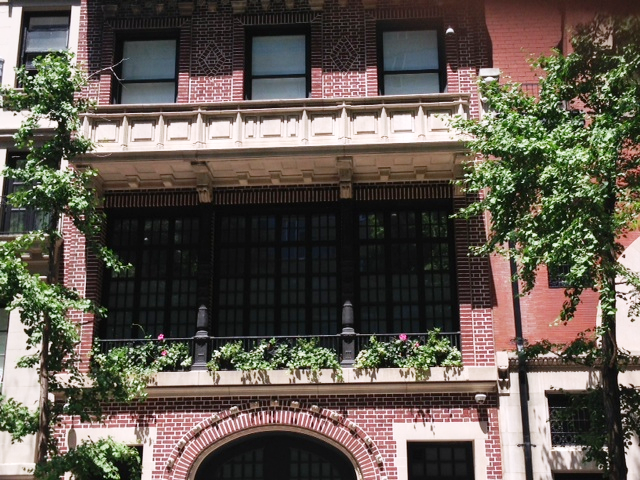 
For a time during the second half of the century, the carriage house-turned garage was owned by famous fashion photographer Francesco Scavullo.   Best known for his thirty years of Cosmopolitan magazine covers, he photographed celebrity icons like Elizabeth Taylor, Grace Kelly and, later, Farrah Fawcett, Brooke Shields and Sting.


Inside the building that once housed Heber Bishop’s carriage horses now hang artworks by Andy Warhold, Roy Lichtenstein and Picasso. 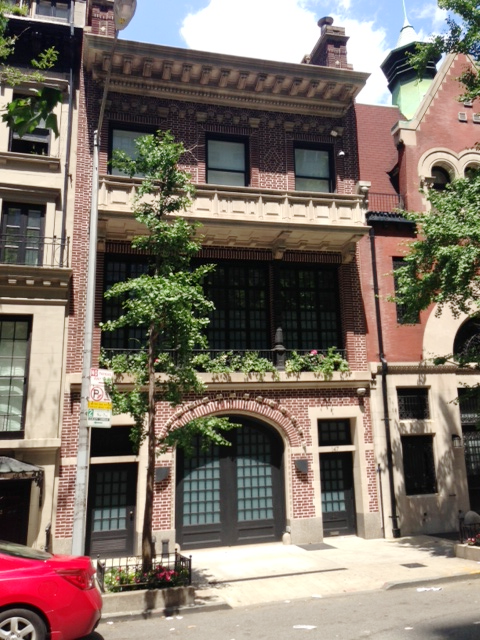 photographs taken by the author
Posted by Tom Miller at 3:59 AM