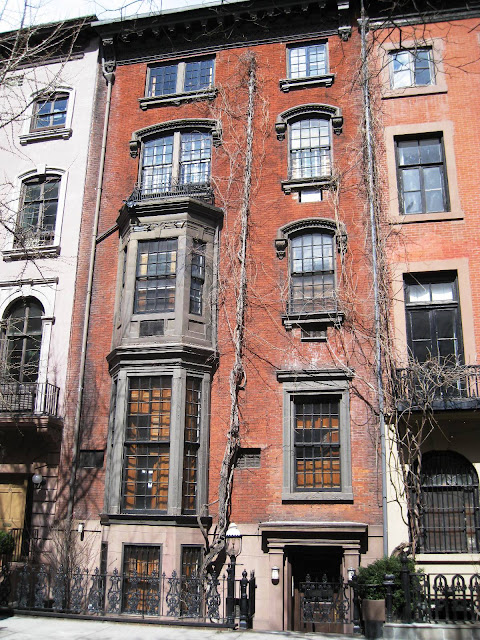 By 1854 the Fifth Avenue blocks just above Washington Square were home to New York’s wealthiest citizens.  As more mansions were built along the genteel thoroughfare, the streets immediately off the avenue took on its chic character.  West 9th Street between Fifth and Sixth Avenues saw the rise of imposing residences where a generation earlier only modest Federal homes had sat.


In 1854 wealthy warehouse operator Thompson Price laid plans for his new home at No. 17 West 9th Street.  Completed a year later it was a prim Italianate residence of red brick.  A steep brownstone stoop led from the sidewalk to the parlor floor and an eye-catching three-sided bay rose from the basement level through the second floor.


Price spared no expense in the details, as evident in the richly-ornamented window crowns and the elaborate cornice.


By 1874 George Adrian Iselin was living here.  A graduate of Cornell University's class of 1872, Iselin never married.   At a time when most millionaires at least pretended to work—choosing finance, law or real estate as a respectable profession—young Iselin preferred the life of a club man.  The New York Times would diplomatically say he led “a retired student’s life.”


Among George’s friends was William W. Sabin.  Like his father, the well-known book seller and bibliophile J. Sabin, William ran a bookstore at No. 64 Nassau Street.  Unlike his father, he dabbled in risque French publications.  In March 18, 1880 he found himself in hot water when undercover detectives Anthony Comstock and Joseph A. Britton walked into his store.


Sabin sold the pair “an improper book and picture” and Comstock returned with a search warrant.  The New York Times reported that “390 pictures and 25 books were seized,” although Sabin denied his guilt.


The bookseller was arrested as Anthony Comstock told the press that “the collection surpassed in absolute filth that of any previous lot he had ever seized.”  The judge, Justice Duffy, “gave very emphatic utterance to his disapproval of the dissemination of such matter,” reported The Times.


George Iselin came to his friend’s assistance and provided bail.  His action was a daring proof of friendship when Victorian judgment would most certainly have quickly connected him with the pornographer.
Iselin’s residency in the house was followed by the esteemed attorney Julien Tappan Davis and his family.  Davies’ wife was the former Alice Martin.  He was “for many years one of the leaders of the New York Bar,” according to The Times.  The Davies children grew to adulthood in the house—Julien Townsend Davies, Frederic Martin Davies and sisters Ethel and Cornelia Sherman Davies.


On November 27, 1894 young Julien was married to Marie Rose de Garmendia.  The wedding was a somewhat somber affair, however.  The bride’s father, Carlos G. de Garmendia, was in failing health.  Called by The New York Times “one of the most prominent Spaniards in the city, both in social and business life,” he was so ill that the wedding took place at his bedside.  He died six days later.


The newlyweds stayed on in the family home on West 9th Street.


In the meantime Julien’s parents continued to give noteworthy entertainments here and at the family’s Newport cottage, Pine Croft, on Pugatory road.


1900 was the year of the coming out of Julien’s younger twin sisters.  On February 15 their mother gave a dinner deemed by The Times to be “notable” and five days later hosted “a large reception and musicale at her residence…Miss Putnam, the harpist, will play,” announced the newspaper.


Then something went awry.  In November the society pages reported that only Ethel would be coming out.  “Despite numerous reports to the contrary, Miss Cornelia Sherman Davies…is not to have a coming-out tea given for her, and she will probably not be ‘out’ at all this Winter—certainly not until after the holidays,” said The New York Times.


The debut of only one of the twins was socially awkward and unexplained.  The following April their brother Frederic married “Miss O’Neill of Pittsburgh” and little more was mentioned of Cornelia’s aborted debut.


Cornelia’s first social appearance was in her sister’s wedding at Newport on August 9, 1902.  Ethel’s marriage to Archibald Gourlay Thacher of Boston was called by The Times “the most notable event of the Newport season, and the largest of several weddings that have occurred.”


The church was packed with “people prominent in the social world,” including names like Oelrichs, Vanderbilt, Berwind, Grosvenor, Gould and Carnegie.  Ethel’s bridesmaids reflected the family’s social status—included in the bridal party were the daughters of Mr. and Mrs. Stuyvesant Fish, Mr. and Mrs. John Sloane and Mr. and Mrs. George J. Gould.


While his children had been demanding the bulk of the social spotlight, Julien Tappan Davies hosted a dinner in the 9th Street house on April 3, 1903 that would steal attention back.   Davies had been for several years the counsel for the Manhattan Elevated Railroad.  In celebration of the transfer of the railroad to the Interborough Rapid Transit Company, the attorney invited the executives of the companies—including August Belmont and George J. Gould--to dinner.


“Around the dinner table was built a miniature elevated railway of steel, and as the diners exchanged congratulations over the event they were gathered to celebrate, a small train of cars ran around the track.  Inside the loop of track heaps of flowers decorated the table, and each guest had a big bouquet directly in front of him,” reported The Times.


With the death of Alice, the Davies family's life in the house came to an end.  In October 1906 the estate sold the house.  Clendenin J. Ryan owned the house in 1909 when he leased it “for a term of years.”   It would appear that around this time the house had become a rooming house.  Santo Cerilli was living here when he became the victim of a burglary on May 3, 1911.  William Kupferschmidt, who lived nearby at No. 61 West 11th Street, made off with $1,000 worth of jewelry from Cerilli’s rooms.


Christian M. W. Valentine, a clerk on the night shift in the registry department of the Main Post Office, was here with his wife and one-year old child in 1914.   The German-born Mrs. Valentine and the baby left to visit her parents Germany that year.  Her timing could not have been worse.  In June the Archduke Ferdinand was assassinated and Europe was thrown into conflict.

Mother and baby were trapped, unable to return home.  With the war raging, they only narrowly escape the bombing of Karlsruhe on June 19, 1915.  Mrs. Valentine wrote to her husband telling him she intended to stay with her parents “indefinitely.”  Not needing the more expensive rooms, Christian moved out shortly afterward to a single room on West 18th Street.


Living in the house on 9th Street at the same time were Mr. and Mrs. Edward Butts.  Their daughter, Edith, was “well known as an interpreter of classic dancing,” according to The Times and in the spring of 1915 completed a tour with the famous actress Maude Adams.


Greenwich Village had become well-established in the first decade of the century as the haunt of artists, writers and musicians.  The Sun reported on the sale of the house on January 3, 1917.  “Next May the house will be altered into studios of two, four and five rooms,” it said.  The New York Times chimed in adding “the buyers represent a corporation which intends to operate largely in that section in remodeling buildings into the studio apartment type.”


Within the year the rooming house had been converted to art studio-apartments and, sadly, the elegant stoop was removed and the entrance moved to the basement level.


In 1922 Harold H. Armstrong lived here, whom The Evening World called “the brilliant young author.”  While here he wrote “For Richer, For Poorer” and “Zell.”    Despite living in a former mansion, the opinionated writer held the wealthy in low esteem.


“Rich people,” he told The Evening World, “unless they have made their money themselves, are not likely to be as well endowed with character as poor people.  It isn’t altogether the fault of the second and third generation rich, although it is certainly their misfortune.  From childhood they have been kept in cotton wool.  They haven’t had any chance to develop the qualities which would enable them either to make a living successfully, or to make marriage a success.”


Award-winning sculptor William Zorach was living here in April 1937 when his “Fountain of Horses,” designed as a possible project for the World’s Fair, was given first honorable mention by the Architectural League of New York.  The Russian-born artist also maintained a summer home in Robinwood, Maine.


It was at his Maine cottage that Zorach found a red cat that became his pet.  Tooky, according to The New York Times “had no more distinguished career than many other Maine pet.  But it had the good fortune to be born with a good figure and to develop winning ways.  It also happened to be adopted as a kitten in the household of a sculptor who enjoys making studies of animals.”


When Tooky died, the sculptor decided to memorialize him in red granite.  Zorach titled the completed 20-inch statue “Granite Cat” and exhibited it at the Second National Exhibition of American Art in 1937.  The statue caught the eye of the Metropolitan Museum of Art which purchased the work on the spot.


In 1948 the house was renovated once again; this time to accommodate a doctor’s office and apartment in the basement level and a total of six apartments above.  Despite the disappointing loss of its stoop, No. 17 West 9th Street retains most of its original exterior elements.   As it did in 1855, it refuses to simply blend in to the streetscape—instead standing out as “among the best of its type,” in the words of the Landmarks Preservation Commission. 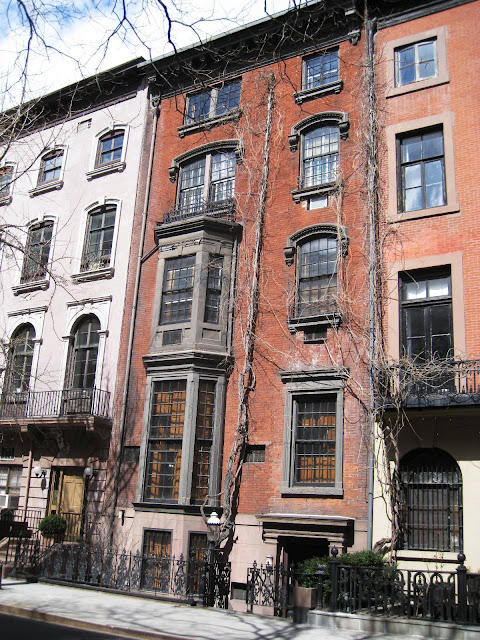