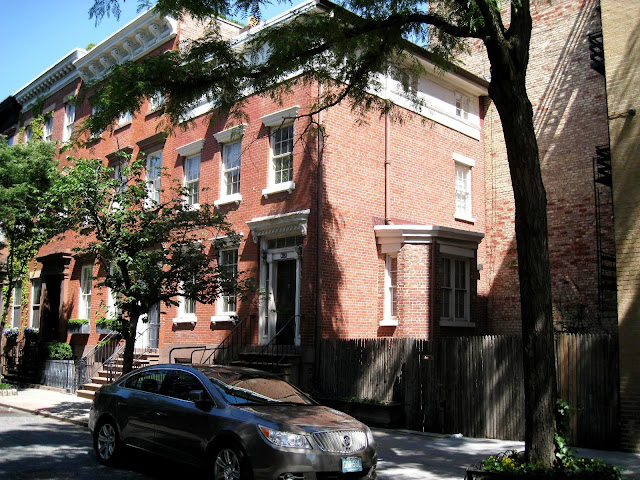 Washington Market began just south of the village of Greenwich in 1812 with a line of food vendor stalls.  In 1834 a building was erected to house the market which became the wholesale food center of the city.  Not only were local produce, meats and dairy products offered, but exotic fare from distant regions—elk, buffalo, bears’ paws and even llama could be found here.  Turkeys from Maryland were sold beside chickens and geese from upper Manhattan.


Wait Wells operated his fish business from Stall No. 30 in 1845 when he built his handsome little Greek Revival house at No. 65 Horatio Street.  The new style of architecture provided a full third floor where the earlier Federal style would have offered only a steep pitched roof and one or two dormers.  A tall stoop rose above the brownstone-faced English basement, both of which were guarded by simple iron railings.  The windows sported simple stone lintels and sills. 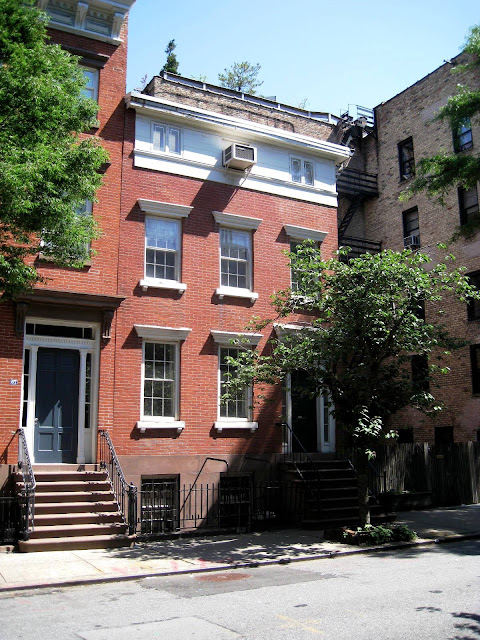 Wells’ spent little on embellishments and only the doorway showed off a bit.  Here a six-paneled door was framed by full and half pilasters, and a glass transom overhead.


Apparently Wells knew that the lot next door at No. 63 would remain vacant, for he not only wrapped the deep wooden fascia below the cornice around the corner, he included windows on the side façade and clad it in brick—an extravagant expense if there were any chance that an adjoining building would cover it.


In 1850 Edwin R. Ives was living here with his wife, Minerva.  That year Ives suffered the embarrassment of having his name published in the newspapers for failing to paying personal taxes of $3.41.

By 1866 the Reynolds family lived here.  Nelson Albert Reynolds enrolled in the introductory class of New York City College that year.   The school was popular among young men in the neighborhood.  Also attending the college three years later, when Nelson was a freshman,were James McComb, Jr. who lived directly across the street at No. 64; Franklin Ford of No. 58; and Frank Baker Stevens who lived at No. 78 Horatio Street.


Sometime before the turn of the century a charming five-sided bay was added to the side, protruding into the lot at No. 63.  The little bay, a rarity in New York City, made the already picturesque house even more so.   It was possibly at the same time that other features of the little house received a cosmetic updating.  Molded sheet metal lintels were added to the front windows, as well as projecting sills that sat on small brackets.   The projecting lintel, embellished with applied jigsaw-cut decorations, was added to the entrance way.


After half a century in the house, the Reynolds family moved on.   The Real Estate Record and Builders’ Guide reported on May 20, 1905 that Nelson A. and Evry Reynolds had sold No. 65 Horatio Street. 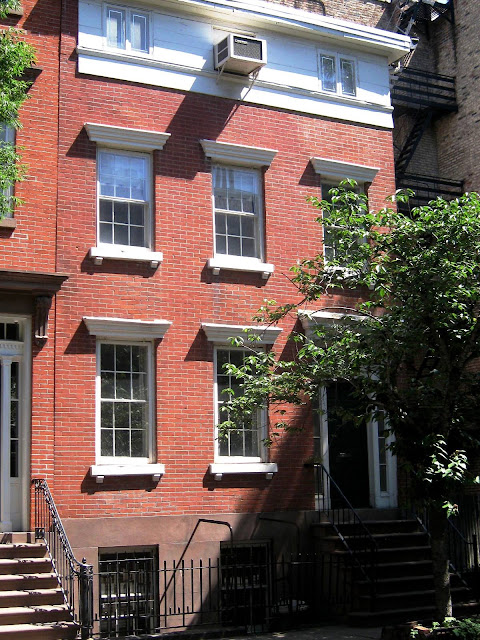 It was, perhaps, the intimate scale of the house that rescued it from being divided into apartments throughout most of the century.  It continued to be a one-family house for decades.  In July 1920 the house was purchased by the mysterious “Mr. Alperi.”   None of the three newspapers that reported the sale, The New York Times, The Sun and the New-York Tribune, printed a first name for the buyer.


Seven years later truck driver William Dunchey was living here.    He was driving his truck on January 15, 1927 when a violent blizzard hit the city.   The fierce storm resulted in one boy, 16, being killed by another truck, and numerous automobile accidents and injuries.     William Dunchey would be among them.


Dunchey’s truck went into a skid at the southwest corner of Sixth and Greenwich Avenues and careened onto the sidewalk.  Two women, 38-year old Harriet Carrier who lived at No. 300 West 12th Street, and, ironically, Dunchey’s neighbor, Waithe Radford of No. 44 Horatio Street, were struck.


Carrier’s skull was fractured and she was taken to St. Vincent’s Hospital.  Radford refused medical attention and went home.  Because of the weather conditions, Dunchey was not charged.


With the construction of a studio apartment in the basement level in 1979 the house technically became a two-family home.  A rare beauty, it boasts one of the few deep wooden fascia boards of its type in New York.   The iron railings from 1845 survive and the simple, original lintels and sills can still be seen at the side windows. 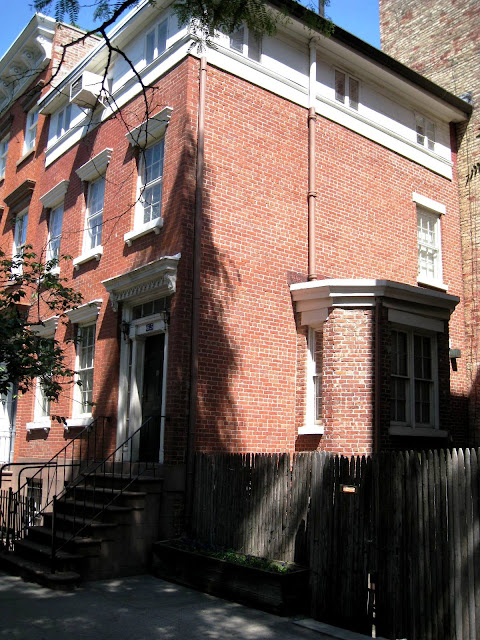 non-historic photographs taken by the author
Posted by Tom Miller at 2:15 AM