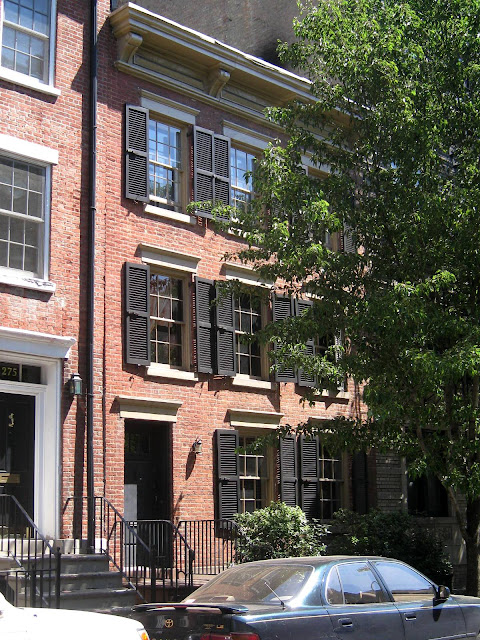 In 1827, while Greenwich Village was in the midst of a population and building boom, grocer James McAllis jumped threw his hat in the real estate ring by purchasing a large plot of land from Michael Talley, who earned his living as a paver.  The expansive lot stretched from what would become No. 323 West 4th Street, around the corner to No. 273 West 12th Street (only in Greenwich Village with its twisting snarl of quaint lanes could West 12th and West 4th Streets intersect!).

Little by little within the next three years McAllis constructed Federal-style homes on his new property until, in 1830, only the lot at No. 273 remained empty.  That year construction began on a charming little brick-faced house.

Unlike its neighbors to the west, No. 273 was a bit shorter—although like those houses it was two-and-a-half stories.  The brownstone stoop was two steps shorter, the basement level just a bit shallower and the ceiling heights just a big lower.  Its slightly diminutive proportions, however, added to its appeal.  Although the residence was faced in Flemish bond brick, McAllis lavished no unnecessary expense on the working-class house.
The house was completed in 1831 and, interestingly, through what might have been a condition of the land sale, Michael Talley continued to pay the taxes on the property.

By 1869 James Scott was working as a fireman at Metropolitan Engine Company No. 18.  Before long he and his wife, Mary, would settle in to No. 273 West 12th Street.   By `1881 he had been promoted to Assistant Engineer and it was around this time that the little house was enlarged to a full three stories.  Although the more expensive Flemish bond brickwork was set aside in favor of running bond, the architect was careful to match the lintels and alignment of the window openings to ensure a cohesive appearance.  A handsome cornice with scrolled brackets was a modern touch.

Upon James Scott’s death around the turn of the century, Mary lived on in the house for years.  She collected the fireman’s pension of $300 per year (about $5,500 today) until her death around World War I.

The little house remained in the Scott family for some time.  In 1919 Isabel G. Scott was living here.  Perhaps because of its delightful small size, the house never suffered the indignity of becoming apartments.

While the exterior of the house remained wonderfully intact, the interiors were modernized nearly beyond recognition.  The little working-class house that was home to a fireman and his family for decades sold for just under $6 million in 2007.

A delightful house, the baby brother to its western neighbors is a charming survivor. 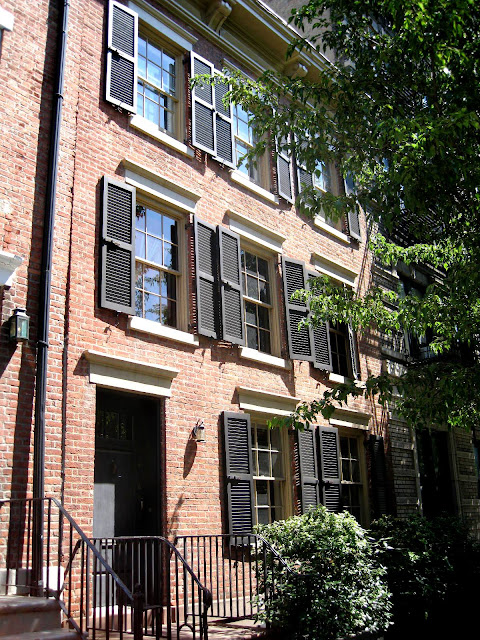 photographs taken by the author
Posted by Tom Miller at 3:52 AM