Even as New York’s boys marched south to fight in the war of rebellion, Fifth Avenue below 23rd street continued developing as the city’s most exclusive residential thoroughfare.  In 1862 C. A. Pepoon erected three brownstone mansions at Nos. 176 to 180, meant to appear as a single grand home.


Italianate in style, the combined homes were reminiscent of a smart English townhome.  The central house at No. 178 projected slightly from its flanking neighbors and its pedimented cornice was mimicked in the treatment of the third floor windows.  The more subdued houses at No. 176 and 180 carried out the unified design.


Business was quick to push the city’s millionaires north and only ten years after the houses were built, No. 178 had already fallen to commerce.  In 1872 Margaret S. Fischer paid the staggering amount of $59 a square foot for Nos. 178 and 180—about $1,000 in today’s dollars.  The New York Times later mused that “although its proximity to Madison Square probably accounted in large measure for the high price of this parcel.”


Fischer removed the stoops, installed vast bayed shop windows at the parlor level, and storefronts on the first floor.  The third and fourth floors were leased as apartments.


The upper floors of No. 180 would be the scene of scandalous and tragic publicity in 1875.  Thomas B. Whitney, the son of Thomas B. Whitney a well-known brewer, was wealthy in his own right.  The Times said the he “owns a large interest in the brewery and other business concerns and is possessed of a considerable yearly income.”


Young Whitney was also a frequent client of brothels.   When he returned from Europe in 1874, he went to one of his favorite brothels several times where he purchased the favors of “an inmate of which he had a previous acquaintance,” according to the newspaper.  But on one visit he noticed another girl, Elizabeth Roane, who went by the name of Minge.


Minge was 20 years-old, “a brunette, well educated, and of very handsome appearance,” according to The Times.  She had her own servant girl, named Euphemia Baptiste.   The 25-year old Whitney was swept away by the young girl.  The Times said “Whitney fell in love with her, and she with him, as far as such women can be supposed to love.”


It was beyond social possibility that the two could marry, but Whitney proposed that she become his mistress and she accepted.  “He at once hired a flat in the brown-stone house No. 180 Fifth avenue, and furnished it in sumptuous style, sparing no expense or trouble in securing the most costly and unique articles of furniture.”


Two additional servants were hired and the pair moved in during February 1875.  Although they were happy together, Minge was jealous of the girls Whitney had formerly patronized.  On November 9 that year when Whitney came home Minge brought up the name of a particular prostitute.  He ignored the subject.


He later testified that “we sat down to dinner about 6:30 o’clock; she treated me rather coldly, but did not say one angry word; at dinner we each drank three or four glasses of ale, as was our usual custom; after she wanted some chestnuts, and I sent the colored servant girl out for some, and laid down on the sofa and went to sleep.”


Minge woke him up accusing him, “Tom, you don’t care for my anymore.”  Whitney refused to discuss the subject and went back to sleep on the bed.  She woke him up again saying “Tom, if you don’t get up and talk to me you will regret it forever.”


Again Tom told her to leave him alone and let him sleep.


He was awakened by the report of his pistol.  Minge was lying on the sofa with a bullet hole through her heart.  The girl had staged her death purposely to make Whitney “regret it forever.”


The doctor who arrived at the scene told investigators “She took from her wardrobe and put on a silk wrapper which Whitney had brought from Turkey, and attired in which, he had often informed her, she appeared to most advantage.  She then dressed her hair in a fashion most admired by her lover, and lying down on the lounge, shot herself.”


Thomas Whitney was overcome with grief.  The New York Times reported that “By order of Whitney, the body of the unfortunate young girl was placed in a magnificent rosewood casket, mounted in solid silver, and having on the plate this inscription: ‘Minge Roane, died Nov. 9, 1875, aged twenty-one years.’”


Although the funeral was nearly private—held in an undertaker’s establishment on Sixth Avenue—the hall was filled with flowers.  “Around the room were arranged so many floral tributes, columns, crosses, cushions, anchors, etc., that when they were taken away they filled three carriages.”


The many friends of Minge’s, assumedly from the brothels, were refused entrance to the service.  “Only Mr. Whitney’s friends were admitted to the rooms where the corpse lay,” said The Times.  “In the afternoon the street was lined with curious lookers-on, among whom many were evidently mourners, who had drawn up in elegant coaches, and whose dress indicated luxury and extravagance.”


In 1879 the store at No. 180 became home to F. W. Christern, booksellers.  Christern catered to the educated, upper-middle class.  Next door was another bookstore, G. P. Putnam’s Sons.


The same year that Christern opened his store here, Colonel Henry C. Logan moved to New York  from California.  At 18 years old, in 1848, Logan had left Baltimore for the West.  The New York Times would later say “His career there was daring and successful.”  He gained his title in the California militia and organized the San Francisco Stock Exchange, serving as its president for a time.  Now in New York, he joined the banking and brokerage firm of Prince & Whitley and took rooms at No. 180.


Unlike other successful financiers of the time, Logan did not amass great wealth.  He preferred to see others less fortunate make use of his money.  The Times said “Although some of Col. Logan’s operations were large, he was too generous to accumulate much of a fortune.  Any needy California could always command his purse.”


On the evening of April 14, 1887 he suffered dizziness in his rooms here.  As he fell, he struck his left temple against a desk.  Colonel Logan never regained consciousness and died on April 15.


Christern’s bookstore moved northward, to be replaced by Dunlap & Co, Hatters in Nos. 178 and 180.  The 1891 “History and Commerce of New York” described the store.  “Here [Robert Dunlap] occupies two floors, 50 x 100 feet each, one devoted to the wholesale and one to the retial department…Every hat bearing the Dunlap trade mark is a gem of art and taste, and so well understood is this fact that the resources of the house are taxed, after meeting its enormous city patronage, to supply the demands at wholesale, for the Dunlap hats are typical in every city in the Union.”


The same year “King’s Handbook of the United States” said “The crown and culmination of a gentleman’s apparel is his hat; and the originator and leader of styles in this country is the firm of R. Dunlap & Co., whose main retail store is at 178-180 Fifth Avenue.”  Robert Dunlap had founded the business in 1857 and remained its only partner.


On March 9, 1895 Madison Square Garden opened its International Costume Exhibition.  Both modern and historical costumes were presented and New York society filed in to the gala event.  The following day The New York Times reported that “The exhibition made by R. Dunlap & Co. of 178 and 180 Fifth Avenue, comprises head gear worn by eminent women from the Fifteenth century to the early part of the Nineteenth, and also the latest novelties for the present season.  Most conspicuous among the number are the duplicates of hats worn by Queen Elizabeth and Marie Antoinette.  The Dutch hat, which is so popular now, is shown as it was worn in Holland during the Seventeenth century.”  The newspaper added “The firm has endeavored to have this display absolutely correct in every detail.”


In 1896 merchant tailor Charles H. Maguire was living in No. 178 and running his business on the second floor.  A 55-year old bachelor, he suffered two strokes in August, the first at the Brighton Beach race track, and a second at the Norwegian Hospital in Brooklyn.  The second stroke proved fatal.


Officials placed a personal ad in the morning newspapers requesting Maguire’s sister, Mrs. Henrietta Mead, to contact the hospital.  The ad stated the tailor had “left considerable property and some jewelry” at the facility.


At the turn of the century parts of the upper floors were leased to small commercial tenants.  In 1900 Bear Litia Water had an office here.  Its water, which it advertised as “America’s Purest & Best,” was bottled at the springs near Elston, Virginia in the Shenandoah Valley.  The same year financier Gustave C. Henry was in the building.


In 1910 Herman Lee Meader had his architectural office in No. 178.  The following year he would draft the plans for a 24-story hotel at the northeast corner of Seventh Avenue and 37th Street.  He told reporters that in his estimation it would be not only the tallest hotel in New York, but in the world.


Gerry Cathcart, a paint manufacturer, paid a visit to the apartment of John Scott Anderson in No. 180 in July 1911.  Anderson was an insurance manager with an office at No. 149 Broadway and was married to the former Agnes Ritchie.  The pair had three daughters, Louise, Beatrice and Nancy.   Cathcart was surprised when the door to the apartment was opened.


He found himself testifying before Referee Phoenix Ingraham in court on March 19, 1912.  “Cathcart said he had known Anderson for thirty years.  He also knew Mrs. Anderson.  On the occasion of his July visit to the apartment, Cathcart said he saw a woman who was not Mrs. Anderson.  Cathcart’s companion, Thomas W. Heffron also testified to seeing a woman attired ‘in just a little fancy gauze work’ in the Anderson apartment,” relayed The New York Times.


Agnes Ritchie Anderson received a decree of absolute divorce, $125 a month alimony and custody of the girls.


The buildings continued to see the coming and going of various businesses.  In 1922 Purvin Typewriter took an entire floor of No. 178.  A year later United Shoe Rebuilding Corporation moved in to the street level store.


In 1927 what was still a beautiful trio of buildings lost its symmetry when No. 176 was demolished by the Connell Holding Co. to erect a modern store and loft building.    In 1939 the surviving pair was converted to apartments above the sidewalk level.  In 1943 Arrowhead Press was in the building and that year released the war-song book “Give Out—Songs Of, By and For the Men in Service.”

Among the tenants upstairs in No. 178 were Miriam Hecht and her husband.  She wrote to the Editor of The New York Times in 1991 remembering the space where they lived from the late 1940s until January 1957.


Today the careworn facades of the two remaining houses retain the 1872 shop windows installed by Margaret Fischer.  Above, they still look amazingly house-like—the last vestiges of a time when this block of Fifth Avenue was New York’s finest neighborhood. 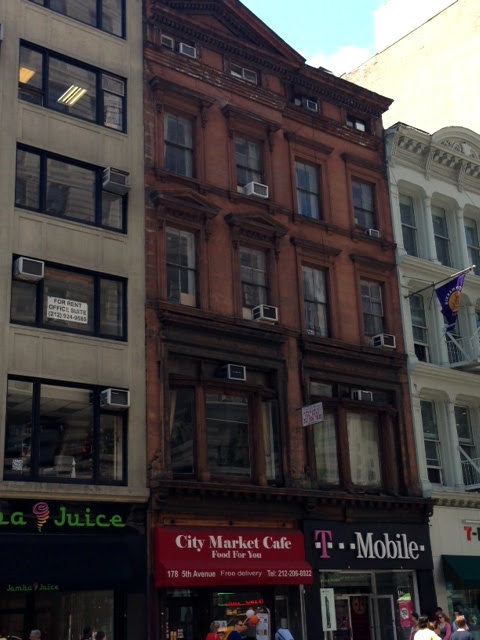