The Theodore B. Starr Bldg. Extension - No. 1126 Broadway 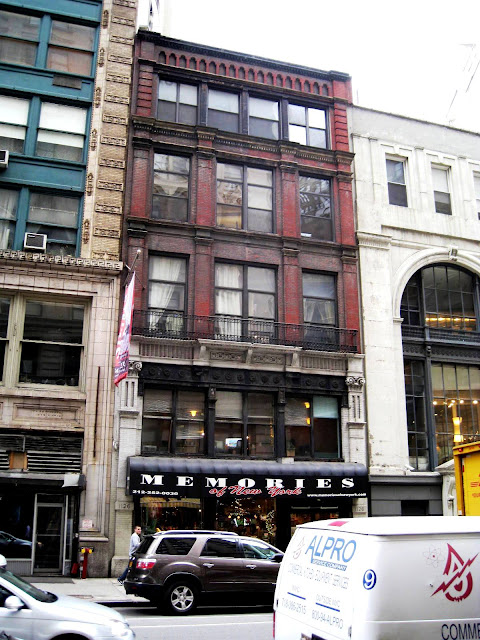 The block between Broadway and Fifth Avenue, 25th to 26th Street got its odd trapezoid shape from Broadway’s diagonal, northwest bearing.  When the three commissioners laid out the grid plan for Manhattan’s streets and avenues in 1811, they simply laid the grid over the ancient thoroughfare.  The result was a series of bow tie configurations and geographical headaches for architects and real estate developers.

After the Civil War the neighborhood was replete with mansions and fashionable hotels.  The house at No. 206 Fifth Avenue, owned by the Perry family, sat just above the narrowest point of the block.  A 40-foot rear yard extended to Broadway—the plot being too narrow to accommodate another house on that street.

In the meantime firm, Starr & Marcus was selling jewelry and silverware at No. 22 John Street to New York’s wealthy carriage trade.  Founded in 1864 it had established a reputation as one of the city’s finest jewelry stores.  In 1877, just as commercial interests were inching northward along Fifth Avenue, Theodore B. Starr bought out his partner and moved the operation to the Perry family’s mansion.

It was a brilliant move for Starr.  No. 206 Fifth Avenue faced Madison Square and the still-intact residential façade melded unobtrusively with the mansions around it.  An employee, William H. Jennings, described it as “a four-story, high stoop, brown stone residence, running back to a court yard on Broadway.”

The rear “courtyard” at No. 1126 Broadway faced two blocks of Manhattan’s most fashionable and expensive hotels—the Fifth Avenue Hotel at 23rd to 24th Street, the Albermarle Hotel at northwest corner of 24th and Broadway, and the Hoffman House which consumed the rest of that block to 25th Street.  The exclusive nature of the neighborhood was reflected in Starr’s annual rent.  In 1877 he was charged $10,000—over $200,000 today.

William Jennings said of the location, “Our customers are wealthy and fashionable people who purchase expensive luxuries in the way of diamonds, jewelry and plate, and this is an excellent location for that business.”  The store offered “fancy goods” as well.  Jennings explained the term:  “that means bronzes, paintings furniture, etc., and things of that sort.”

Before moving in Theodore Starr built an extension to the house, described by Jennings as “a corresponding building in brick to match, making it all one floor.”   Starr’s addition, which cost around $60,000, was a handsome red brick building with a cast iron store front.  Expansive windows allowed ample sunlight into the sales rooms.  The architect deftly used brick to create most the decorative elements – pilasters, pseudo-rustication and an attractive blind arcade above the topmost floor. 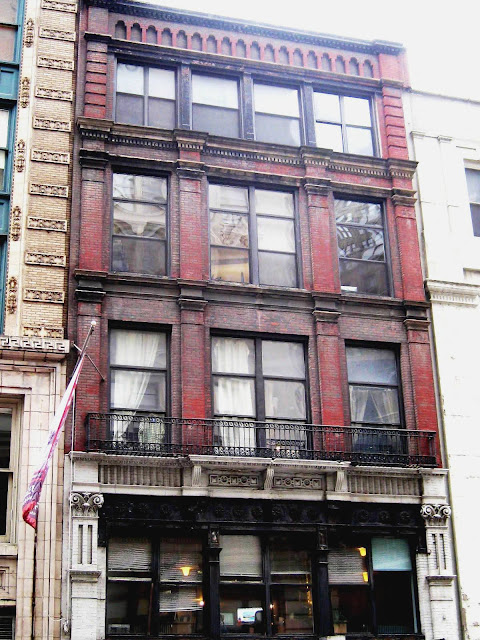 Theodore B. Starr rivaled the other exclusive jewelry establishments like Tiffany & Co. and Dreicer & Co.  On December 20, 1890 The New York Times remarked on the store and its offerings.  “All that refined taste can do has been done to make the place attractive.  The appointments are in keeping with the character of the goods, for which this store is well known, and the articles are shown in a way that makes it a real pleasure to examine them.  Those who stop with[in] the first floor, where the silverware is shown, really fail to get beyond the vestibule to the store.”

The second floor was devoted to porcelains, jewelry and precious gems.  On the third floor were bronzes, clocks—from desk clocks to tall case clocks-- and statuary.  The Times article pointed out “Two valuable pieces of marble statuary by Prof. Cambi of Florence, entitled, ‘The Shepherd Boy’“ and ‘The Spring of Life,’ are on this floor.”

The writer was also taken with a particular necklace.  “Among the unique articles of great value to be seen here is a necklace made of pearls alternating with Rondelles diamonds that have been cut flat and perforated.  A pair of earrings made of giant pearls goes with this necklace.”

The Times article concluded, rather editorially, that “Starr’s establishment, which has no duplicate in this country, and probably not in the world…would be a delightful place for those who have never explored its mysteries to spend a quiet half hour.”

Business was interrupted when a fire broke out in the building on December 30, 1896.  The jeweler was forced to close for four months while “repairs and alterations” were made to the building and showrooms.  It was most likely at this time that the old brownstone façade was stripped off the Fifth Avenue side and replaced with a modern commercial front.

The Holland House Hotel was a favorite among the city’s Democrats, while the Fifth Avenue Hotel attracted the Republicans.  A year after Starr reopened for business the Democrats got on his nerves.  The Democratic State Committee erected two large poles on either side of Broadway, directly in front of Starr’s entrance.  A political banner was stretched between them that spanned the avenue.

Theodore Starr protested to the Commissioner of Highways, arguing that if the Committee wanted a banner, they needed to erect it in front of the Holland House, where its headquarters was located, and not in front of his business.

The neighborhood was thrown into confusion and excitement when a chase involving a dozen policemen and “several hundred other persons” took place on July 16, 1900.  A few days earlier two men, Frederick Titus and Ethan Obadisk, had stolen a valuable camera from Kotchkiss & Reynolds at No. 416-1/2 Sixth Avenue.  The dim-witted thieves then returned to the scene and tried to sell Reynolds a $40 lens for $12.

Reynolds recognized the men and his brother rushed out to summons a policeman.  When the thieves saw Policeman Evans approaching, they rushed out of the store, up 25th Street towards Broadway where they separated.

The New York Times reported “A crowd of 100 men started after the fleeing suspects…Cable cars were stopped by the crowd which joined in the pursuit, wagons pulled up, Policeman Evans knocked over two women carrying baskets, another policeman stepped on a dog which tried to bite him and then stole into an alley, policemen came up on every side to join in the chase, and Broadway and Fifth Avenue were in a state of excitement for some minutes.”

Titus ducked into Starr’s through the Broadway entrance and was found “under a lot of women’s clothes in a closet” on the second floor.  It was the sort of stimulation Theodore B. Starr’s sober customers were unaccustomed to.

The year 1905 initiated a series of substantial changes to the building.  In January that year the estate of Adeline Perry sold the building.  The Times noted that “The parcel just sold has been held in the Perry family for over fifty years.”  Two years later the sons of Theodore Starr incorporated the business and In 1911, after more than three decades here, moved to a new building at Fifth Avenue and 47th Street.

The following year Elmer A. Darling bought the building.  Darling already owned the adjoining Lincoln Trust Building that stretched through the block from No. 208 Fifth Avenue to No. 1128 Broadway.   The building where Theodore Starr had displayed silver tea services, diamonds and bronze clocks was now home to a United States Army surplus store.  Goods “from U. S. Government Arsenal” were advertised with creative uses.

The government surplus store closed on January 11, 1913 and by 1920 the building was home to a new-fangled fad—the phonograph.  The Emerson Phonograph firm announced that “Within this handsome, modern building stand the various models of the new Emerson Phonograph—all waiting to delight you with their full, clear, round tone.”  The store—which called itself the Fifth Avenue Exhibition Shop—offered records and a variety of phonographs.  The machines were priced from $80 for a table model to $1000 for a “luxuriously handsome Period Piece.”

While the Emerson company was demonstrating its phonographs here, Charles H. Weeghman was suffering a reverse of fortune in Chicago.  Born in Richmond, Indiana, he had traveled to Chicago after graduating high school and got a $10-a week waiter job in King’s restaurant.  Within a few years he had saved enough money to open his own restaurant.

The far-sighted young man sought to serve as many customers as possible and as quickly as possible.  So he devised the “one armed restaurant”--lunchrooms with one-armed chairs.  The gimmick made him a millionaire and earned him the nicknames “Lucky Charley” and the “Quick Lunch King.”  But in 1916 he purchased the Chicago Cubs (who won the pennant the following year) and began funneling his money into baseball.

The New York Times later noted that “During the time he was occupied with the baseball teams and spending a large part of his fortune on them, his restaurant finances were said to have become disordered.”  In 1919 William Wrigley Jr. acquired the controlling interest in the ball team and a year later Weeghan’s restaurant chain went bankrupt.

Now known as “Unlucky Charley,” Weeghan moved to New York and in October 1921 signed a 21-year lease on the old Theodore Starr building for $1 million.  The deal gave the Emerson Phonograph Company the top three floors.  The New-York Tribune said that Weeghan intended to start a new chain of restaurants in New York with this being his first location.

The building was home to a variety of small showrooms and offices throughout the rest of the century.  Today a tawdry souvenir business engulfs the Broadway street level where Theodore Starr‘s expansive silver services were displayed.  No. 1126 Broadway, which bears no architectural similarity to its Siamese twin on Fifth Avenue, is somewhat neglected; but the distinguished façade erected by Theodore B. Starr in 1877 survives beautifully intact under a layer of grime.

non-vintage photographs take by the author
Posted by Tom Miller at 2:51 AM