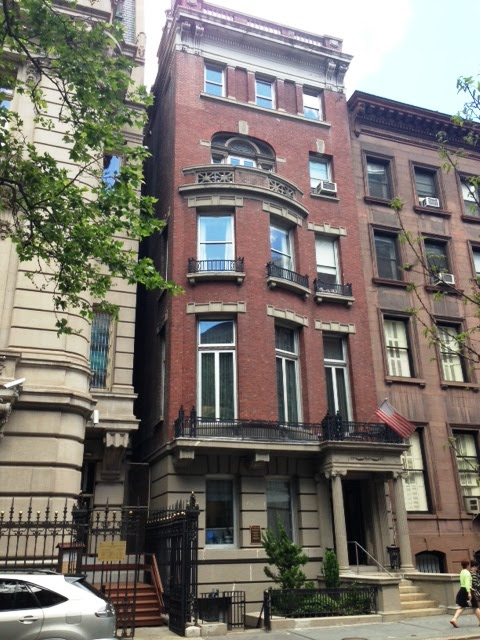 In the decade prior to the Civil War the Murray Hill neighborhood along Madison Avenue drew wealthy New Yorkers from the fashionable Bond Street and St. James Park neighborhoods.  In 1854 Isaac Newton Phelps erected his lavish brownstone mansion at the southeast corner of Madison Avenue and 37th Street.   The block front extending to 36th Street was completed with the houses of relatives John Jay Phelps and William E. Dodge—establishing the highly exclusive neighborhood.


Before long Parke Godwin built his home at No. 19 East 37th Street, across from Isaac Phelps’ home.  Born in 1816, he graduated with a law degree from Princeton in 1834; although he never practiced.  His passion instead was in writing and journalism.


Godwin had married Fanny Bryant, daughter of William Cullen Bryant, in 1842.  During the couple’s half century in the 37th Street house he would become editor of the New York Evening Post, The Commercial Advertiser, Putnam’s Monthly and The Harbinger.  The prolific author wrote academic books including “Pacific and Constructive Democracy,” “Popular Views of the Doctrines of Charles Fourier,” “A Hand-Book of Universal Biography,” and “History of France.”


At the turn of the century Godwin was still active and writing while to the south, on Broadway, Charles Healy Ditson was increasing his fortune running the Chas. H. Ditson & Co. music store.  It was nationally recognized as a leader in music publications and printed Dwight’s Journal of Music, The Monthly Musical Record and The Musician; as well as selling instruments and sheet music.


On November 29, 1903 The New York Times reported that the Godwins’ daughter Nora “has cards out for receptions on Dec. 8, 15, and 23 at her house, 19 East Thirty-seventh Street, to introduce her niece, Miss Nathalie De Castro.”  The debutante entertainments would be the last in the Godwin house.


On January 7, 1904 Parke Godwin died in the brownstone residence at the age of 88.  Within a year plans were filed for a new mansion on the site.  On March 8, 1905 it was announced that the “old building [has been] demolished.”


It was Charles H. Ditson who purchased the old Godwin residence--now noticeably out of style.  He commissioned mansion architect Charles Pierrepont Henry Gilbert to design a fashionable replacement.


Gilbert was already well at work on the hulking Joseph DeLamar mansion next door at the corner of Madison Avenue.  The spectacular Beaux Arts palace would stand in stark contrast to the Ditson House, completed the same year, in 1905.

Unlike his exuberant French concoction next door, Gilbert reined in the Ditson mansion.   Some of Manhattan’s millionaires had recently spurned the frothy Beaux Arts style that had been popular for a decade.  Instead they turned to the Colonial, erecting red brick and limestone structures drawing on Federal and Georgian lines.  While the De Lamar mansion erupted in French gaiety, the neo-Georgian Ditson house remained prim and restrained.

A set of six stone steps stretched from the sidewalk to the stone-columned portico.  The basement and parlor-level base of rusticated stone supported four stories of red brick with limestone trim, including a two-story bowed bay. 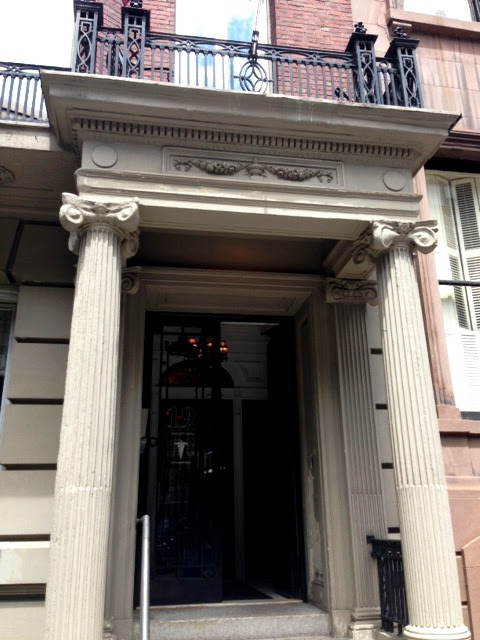 Two years later Ditson moved his business to the new Ditson Building designed by Townsend, Steinle & Haskell.  It was conveniently located in walking distance from the mansion, just three blocks away on 34th Street.


The Ditson’s receptions and entertainments, like the musicale they hosted on the Sunday afternoon of April  5, 1914, took a more serious turn as World War I broke out in Europe.  Alice Maud Ditson threw herself into war relief efforts even before the United States entered the conflict.


By 1916 she had offered the home as nominal headquarters for the Secours Duryea.  The organization, headed by socialites mostly from the neighborhood, collected donations which were spent on relief supplies for French war victims.   On July 30 Mrs. Ditson announced  that it had shipped during the previous week “many hospital beds, completely equipped, shoes, and other relief supplies for the wounded and destitute of France.”


The founder of the organization, Nina L. Duryea, had spoken at the Ditson residence four months earlier.  The New York Times reported that “she said it was the duty of every one in this country to aid the sufferers in the trenches and make life a bit brighter for them, and that she had been greatly shocked by the extravagance of many people when there was so much suffering in the war zone.”


The following year Alice Ditson was still collecting donations from her home.  On January 14, 1917 The Sun reported that the group had “supplied food, clothing and medical necessities to more than 50,000 persons, but the demand for help is almost unlimited.”


Even charitable war work sometimes demanded a break, it would seem, for on April 7, 1917 The Sun noted that “Mr. and Mrs. Charles H. Ditson have gone to the Greenbrier, White Sulphur Springs, West Virginia, to remain a week.”


The end of the war did not spell the end of Alice Ditson’s patriotic and political passions.   In July 1919 the Allied Loyalty League was formed with Alice as its Secretary.  The Times said that the new association was formed “to fight Bolshevist tendencies in this country by the promotion of Americanization…In addition to the promotion of patriotism at home, the organization will also attempt to promote good feeling and friendly relations between the United States and the Allies.”


Those goals were reflected in the reception held in December 1921 at the Ditson mansion  for the former American Ambassador to Italy, Robert Underwood Johnson, and his wife.


Within a few years Charles Ditson’s health began to fail.  In May 1929 he caught a cold and a few days later at 10:00 at night he died in the house on East 37th Street.  Ditson was 84 years old.  His obituary said "He was always a hard worker."

The funeral was held in the residence on the evening of May 17.


Charles H. Ditson left a gross estate of just under $8 million.  The childless millionaire left $800,000 for musical education, bequeathing $100,00 each to Columbia, Yale, Princeton and Harvard Universities, as well as to the New England Conservatory of Music, the Chicago Musical College, and Ann Arbor School of Music and the College of Music in Cincinnati.


For the more than 300 employees of his New York operation he left $10,000—divided based on length of employment into sums from $642 to 71 cents each.


Alice received the bulk of the estate, including the 37th Street house valued at $125,000 (about $1.3 million today).  However she did not stay in the home she had shared with her husband for nearly 25 years; instead she moved to No. 730 Park Avenue.  She leased the house briefly to Mrs. Margaret S. Buckman and Dr. Harris H. Gregg.


Change had come to Murray Hill area by the Great Depression and business concerns were quickly engulfing the formerly-exclusive residential neighborhood.   In 1935 the Ditson house was owned by the East Thirty-seventh Street Studios, Inc.; real estate developers that purchased old dwellings and converted them to apartments.


The property quickly changed hands.  In 1942 the house which had been “remodeled into apartments,” according to The New York Times, was sold to “a British syndicate.”  In 1944 it was sold again, now described as a “ten-family apartment house.”  Two years later Henry Payson, “operator,” purchased the still-upscale building.


One of the residents at the time was Colonel Vassily S. Zavoico.  While Alice Ditson had been collection donations for the French, the Russian oil industrialist was busy with his own political problems.  In August 1917 he was the leader of an unsuccessful coup against the Kerensky Government.


Born in St. Petersburg in 1872, he was highly-connected.  The grandson of Admiral V. V. Zavoico, commander of the Russian Pacific Squadron during the Siege of Sevastopol in 1854-1855, he had served in the Russian diplomatic corps in London and Paris Embassies.


Zavoico had also been president of the Nobility Council of the Province of Podolsk in southern Russian and had been managing director of several Russian oil companies.  And then came the Revolution.


Following the failed coup he escaped to the United States.   His oil background landed him a position as foreign representative of the Bethlehem Steel Company in its construction of European oil refineries.   The 75-year old Russian with many stories to tell died on June 8, 1947. 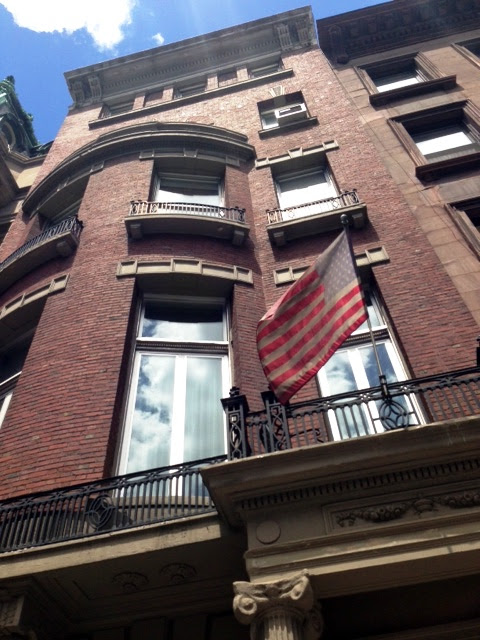 By the 1990s the Ditson House was the home of the Consulate General of Ghana.  Then, in 2004, it was converted to luxurious, spacious apartments.   Despite its many lives, the outward appearance of the house has changed little; a handsome survivor of the last glory days of Murray Hill.