At the age of 19, Constantine Foltis immigrated to New York in 1909 and found a job with the Childs restaurant chain.  By 1928 he owned several stores, known as the Foltis Food Shops, which focused on healthful produce and meats.


The 1920s saw the rise in popularity in a new concept in dining—the self-service restaurant.   Chains like Horn & Hardart provided shop girls and businessmen quick, inexpensive meals in clean and attractive environments.  Constantine Foltis got in on the act.


Foltis immediately expanded.  Within the year he announced in The New York Times a planned restaurant at No. 411-13 Fourth Avenue (later renamed Park Avenue South).   On September 11, 1929 the newspaper said that “following alterations of the present property, they will open their thirty-first restaurant.”


On the site was a four-story building that housed the O. L. Cushman Co. lunchroom.  On the second floor were offices and the top two floors held “non-housekeeping apartments,” as recorded in Department of Buildings records.  Foltis commissioned Erhard Djorup to renovate the existing structure.


The Austrian-born architect had been busy as a partner in Bark & Djorup designing Art Deco office buildings like the massive 1384 Broadway completed in 1928 for developer Abraham Lefcourt.  But that same year the partnership fell apart and the Foltis-Fischer restaurant was apparently one of Djorup’s first independent commissions afterward.


Djorup brought the old building squarely into the Jazz Age.  A two-story base of black stone was highlighted with white Art Deco decorations at the second floor and gold at the first.   A frieze within the central double-height arch announced the restaurant’s name.  On either side stair-stepped openings at both levels were flanked by streamlined pilasters.  The upper floors, clad in white terra cotta, were decidedly less decorated.  Above it all an Art Deco parapet also advertised the Foltis-Fischer name.


The renovations were completed in May 1930.  The sidewalk level housed the restaurant, the second floor was used as offices, and the third and fourth floors were, again, rented as residential space. 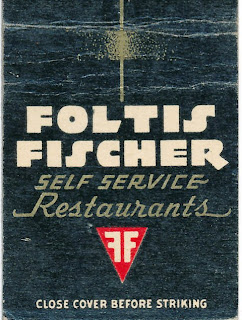 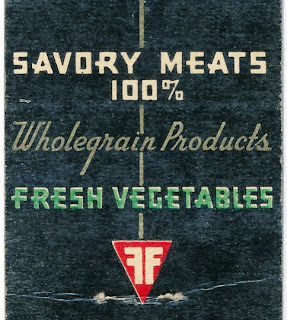 A matchbook cover (front and back) hawks the wholesome qualities of the fare.

Foltis continued to market his restaurant as serving wholesome foods.   The timing of his ambitious venture, however, was unfortunate.   As the building at 411-13 Fourth Avenue was being renovated, the Stock Market Crash plunged the nation into the Great Depression.   It was also a time of labor unrest and organized crime bullying of small business.


Trouble started for the restaurants when, in July 1932, underworld boss Arthur Flegenheimer (known in mob circles as Dutch Schultz) and his gang organized the Metropolitan Restaurant and Cafeteria Association.   The Association took control of two unions “by threats, violence and corruption,” according to district attorneys later, and restaurant employees were forced to join.


Restaurant owners, including Foltis-Fischer, were convinced to join the association by threats and actual throwing of stench bombs, beatings and other violence, intimidation of customers and employes, and placing picket lines where there were no strikes,” reported The New York Times.  The Association was collecting $5,500 a week in “membership dues.”


By October 31, 1936 when the Schultz gang was indicted on charges of extortion, attempted extortion and conspiracy in the $2 million-a-year racket, the Foltis-Fischer restaurants had paid out $9,975 in protection money—almost $150,000 today.


Despite the restaurant’s paying its “dues;” in 1933 workers in the Foltis-Fischer chain went on strike.   In May that year Dorothy Day, writing in The Catholic Worker, opined “For generally bad working conditions, Foltis-Fischer is one of the worst restaurants in New York.  You will notice that men are picketing up and down in front of their chain of restaurants throughout the city, and the strike of employees there has been a bitter one.”  She added “If the public cooperated with the workers and refused to go into a restaurant where men were picketing in front, there might be more chance for strikers to win their fight for justice.”


The same year that workers were picketing in front of 411-13 Fourth Avenue Adolf Hitler became Chancellor of Germany.  Within a month the German Reichstag was burned to the ground and two weeks later the first concentration camp, Oranienburg, was opened.  By the end of 1933 Hitler had full dictatorial power and Germany had withdrawn from the League of Nations.


It would be years before the United States was pulled into a world conflict; but the Foltis-Fischer Co. chain took an early and symbolic stand.  On May 8, 1934 it was announced “That thousands of New Yorkers heretofore using the German yeast product, Savita, will do without it, became known yesterday as the Foltis Fischer Corporation restaurants and retail shops prepared to ban this and other German imports.”


The Depression, the mob, and labor problems all took their toll.  In 1938 the company declared bankruptcy after a decade of doing business.   In 1944 the Emigrant Industrial Savings Bank sold the building to the 411 Fourth Avenue Realty Corporation.


Throughout the remainder of the century the structure remained unchanged—offices and a showroom on the ground floor, offices on the second, and four apartments per floor above.  Most remarkable is that the wonderful Art Deco façade remained, for the most part, untouched.


In 1991 the ground floor became a restaurant once again.  Les Halles Boucherie Rotisserie is still in the space today, despite the astonishing fact that the bold zig-zagged frieze still reads FOLTIS-FISCHER after nearly a century.
Posted by Tom Miller at 2:50 AM