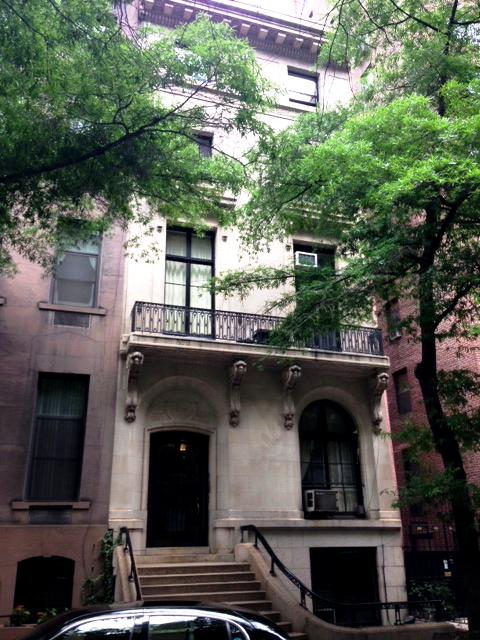 In the decade before the outbreak of civil war, wealthy citizens abandoned the Bond Street and St. John’s Park neighborhoods for the developing Murray Hill area further north.  By 1861 the north side of East 37th Street between Madison and Park Avenues was lined with fashionable brownstone-fronted residences.


On the night of Thursday January 4 that year a young man was walking past No. 29 East 37th when he slipped on the ice-covered sidewalk.  The New York Times reported on the fatal fall.  “The accident occurred in consequence of the slippery condition of the sidewalk, and the unfortunate man fell with such force against the area steps that his skull was fractured.”

It was a traumatic event on a normally quiet and refined block.


As brownstone mansions rose nearby on Fifth Avenue, the 37th Street block was similarly  home to millionaires.  When Jacob Berry sold the four-story house at No. 29 to John M. Cornell in March, 1882, his neighbors included publisher Parke Goodwin, financier J. Pierpont Morgan, and sugar baron Theodore A. Havemeyer.


Cornell was a partner in J.B. and J.M. Cornell, manufacturers of architectural ironworks.  While the wealthy iron merchant was living here, another successful businessman was making a name for himself in political circles.  Cornelius Newton Bliss lived just three blocks south at No. 198 Madison Avenue.


Bliss was 49 years old when Cornell moved into the 37th Street house.    He had come to New York shortly after 1866 when his dry goods firm opened a branch in the city.  Bliss, Fabyan & Co., became one of the leading dry goods commission houses in the country.  But it was his interest in politics that made Bliss a household name.


Active in Republican politics, he actively supported the local reform movements.  He served as Chairman of the Republican State Committee in 1887-88 but was reticent to seek a political office.  When President Harrison was poised to offer him a cabinet position he persuaded his friends not to present his name.  He declined the nomination for Governor of New York in 1885 and again in 1891.


In 1892 he was made Treasurer of the National Republican Committee, a position he would hold for four successive campaigns.  Finally, when William McKinley took office in 1897 Bliss accepted the position of Secretary of the Interior.


In 1900 when President McKinley prepared to run for his second term, he offered Bliss the vice-presidency.  Characteristically, Bliss declined.  The following year William McKinley was assassinated.


Although 72-years old in 1905, Bliss was still active in business and political life.    On May 16 that year The New York Times noted that John Cornell had sold the house at No. 29 East 37th Street.  “Cornelius N. Bliss has bought for his own occupancy the four-story brownstone-front dwelling…near Madison Avenue.”


Change was happening on the block that year.  At the northeast corner of Madison Avenue and 37th Street the sumptuous Joseph DeLamar mansion was being completed, as was the Charles H. Ditson residence next door at No. 19—both designed by mansion architect C.P.H. Gilbert.  It was a time when wealthy homeowners were remodeling or replacing the outdated brownstones for stylish residences.


Cornelius Bliss would do the same.  The prudish Victorian was given a make-over resulting in a white marble Beaux Arts façade.  A wide stone stoop spilled down to the sidewalk.  At the second floor a stone balcony supported by elaborate carved brackets stretched the width of the residence, protected by a delicate iron railing.  The parlor floor openings were recessed, framed with gentle concave arches.


With Bliss in the updated house were his wife, Elizabeth, their daughter Lizzie and son Cornelius, Jr.  By now he was President of the Fourth National Bank; a director of the Central Trust Company, the American Surety Company, the Home Insurance Company, the American Round Bale Press Company and the Equitable Life Assurance Society.  He was a member of some of the most exclusive men’s clubs in the city including the Union League, Metropolitan, Century and Lotos.


An art collector, Bliss was a member of the National Academy of Design and the Metropolitan Museum of Art.  Daughter Lizzie was passionate about modern art and the 37th Street house filled with works by Renoir, Degas, Monet and Arthur Bowen Davies.


The next year Cornelius Bliss was responsible for the Republican Party’s finances when he spearheaded the Harriman fund to help the Theodore Roosevelt presidential campaign.  Bliss managed to solicit a $100,000 donation from the Standard Oil Company; a major part of the $260,000 raised.


The Bliss family divided their summers between their estate on Jekyll Island, Georgia where Cornelius was a member of the famous Jekyll Island Club (sometimes called The Millionaires Club), and their country home in Oceanic, New Jersey.


As the new year approached in December 1910—just five years after moving in to the 37th Street house—Cornelius N. Bliss showed the first signs of fading.  On New Year’s Eve The New York Times reported that although Bliss had been ill and confined to the house for the past ten days, he was reportedly “recovering rapidly and it is expected that he will be about in a few days, at any rate, in time to celebrate his seventy-eighth birthday in the latter part of next month.”


The birthday indeed came and went, but Bliss’s health did not improve.  The family spent the summer of 1912 at the Oceanic estate;  but Bliss "was so feeble that he was able to leave the house only a few times during the Summer,” said The Times.   The millionaire’s doctor, Arthur W. Bingham, spent the summer with the family.


In September a special steamer was chartered to transport Bliss back home to 37th Street.  When the steamer docked in New York, reporters met the boat.  The family tried to hurry Bliss through the crowd without making a statement.  But the old man, after years in the public eye, refused.


“I have occupied public office so long that the newspapers have certain rights regarding me,” he told his son and daughter.  He then dictated a statement on the spot to be distributed among the reporters.


Two weeks later, at 7:00 on the evening of October 9, 1911 Cornelius Newton Bliss died in the house on East 37th Street.  The New York Times reported that “The cause of death was heart disease, due in great measure to extreme age.”


The funeral was held in the house at 11:00 on the morning of October 12.  To represent the Chamber of Commerce at the funeral was a specially-appointed committee that included millionaires J. Pierpont Morgan, Jacob H. Schiff, John Claflin and Cleveland H. Dodge, among others.


Bliss left a fortune of over $4 million which was divided among Elizabeth, Lizzie and Cornelius, Jr.   The 37th Street house was assessed at $120,000 (a little over $2 million today).  The published estate not only enumerated assets like the Jekyll Island and Oceanic estates and furniture, two automobiles appraised at $1,900 and $3,500 and artwork; but lesser items as well.  “At his estate Oceanic, Monmouth County, New Jersey, he had an old brown horse worth $20, a team of bay horses worth $400, and a $15 donkey.  On this estate also he had an old cow worth $15, three Jersey and Alderney cows worth $225 and three heifers worth $90,” reported The Times.


Elizabeth and Lizzie continued to live on at No. 29 East 37th Street.  Elizabeth died in the house in September 1923 and her funeral was held here at 2:30 on the afternoon of September 30.


Lizzie was a well-known patron of the arts and continued her father’s love of collecting.   She was among the leading collectors of modern art in New York and contributed to the landmark Armory show of 1913.  Known also as Lillie, she was a central figure in the founding of the Museum of Modern Art.  The rooms of the house were hung with works by Gauguin, Matisse, Modigliani, Picasso, Cezanne, Seurat and Davies.


In 1926 Lizzie hosted a series of lectures in the house.  On February 9 Forbes Watson gave the fifth lecture in the series, speaking to a group on “An Interpretation of Modern Art.”


The 66-year old was still living her when, in August 1930, her brother sold the Bliss home to his own corporation, Ravdon Realty Corporation for $150,000.   Despite the sale, Lizzie remained in the house until her death seven months later in March 1931.


Her massive art collection was donated mostly to museums.  150 works of art went to the Museum of Modern Art.  Other museums benefiting from bequeaths included the Corcoran Gallery of Art in Washington, D.C.; the Phillips Academy at Andover, Massachusetts; the San Francisco Art Association, The Portland Art Association in Oregon; the St. Paul Art Institute; the Newark Museum; the Memorial Art Gallery in Rochester, New York; and the Metropolitan Museum of Art.


Eyebrows in the art world were raised when two paintings by Arthur B. Davies, “Line of Mountains” and “Sleep,” were refused by the Tate Gallery in London.  Sinclair Hamilton, Lizzie Bliss’s attorney, received a “cordial” letter from the Gallery declining the gift.  The lawyer diplomatically told reporters that although no reason had been given for the refusal, “lack of space in which to display the paintings probably had dictated the decision.”


Former president of the American Art Dealers Association, F. Newlin Price, was more direct.  The New York Times said he “expressed surprise that London should show so little interest in American art and said that this country should be congratulated that the paintings had been returned.”


By 1936 the house had been divided into apartments—two on each floor other than the parlor, which was a single apartment.   The upscale block still drew well-to-do residents, like Antonia Hatvany who lived at No. 29.


Antonia’s sister was Hungarian dramatist Baroness Lili Hatvany, married to Baron Julius Madarassy-Beck of Budapest.   When their daughter, Mariella Madarassy-Beck, married Robert Cox in the nearby Church of the Transfiguration on February 4, 1939, Antonia held the reception in her spacious apartment here.


In January 1943 The Times reported that a “Murray hill property changed hands with the sale by Cornelius N. Bliss, banker of the four-story apartment house at 29 East Thirty-seventh Street to Jules V. Pallister.”


After nearly four decades in the Bliss family, the new owner made slight changes.  By the following year there were two apartments on each floor other than the second, where there were three.


Cornelius Bliss’s striking white home still stands out among its neighbors.  The rooms where modern masterpieces once hung remain apartments and the elegant façade is little changed.
non-credited photographs taken by the author
Posted by Tom Miller at 2:46 AM