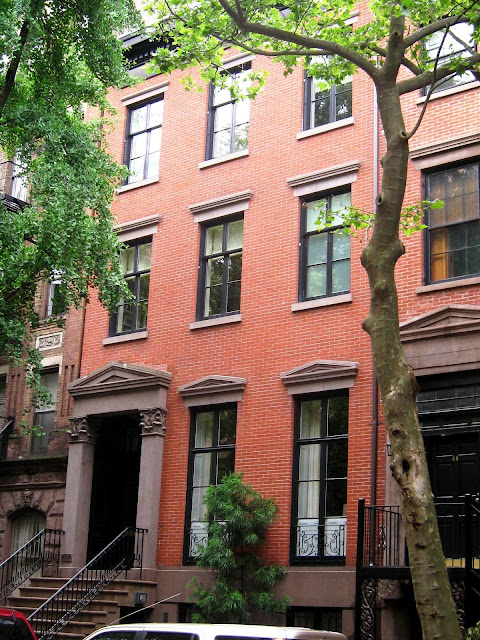 Like St. Luke’s Place a block to the south, quiet winding Morton Street attracted well-to-do merchant class families by the late 1840s.   The street where Federal style homes of a generation earlier still stood saw the construction of wide brownstone or brick-faced homes in the latest Greek Revival style.


A year after Nos. 60 and 62 Morton Street were built for clothing merchant John D. Scott and lumber dealer Helmus H. Wells, a near-matching house was completed at No. 58.  Construction on James H. Noe’s house began in 1848 and was finished a year later.  Noe was a highly-successful brush maker with a store and factory downtown at No. 275 Greenwich Street.


Like its twin neighbors, No. 58 sat on a rusticated brownstone base.  Floor-to-ceiling windows graced the parlor level where the brownstone entrance was ornamented with elaborate foliate capitals.

It appears that Noe and his wife, the former Katherine Mangels, lived in the Morton Street house for a little over a decade, after which they moved to No. 21 King Street.  Later James H. Noe would be the victim of one of the most publicized murders of 19th century New York.


Among the criminals that populated the gritty Five Points neighborhood was Johnny Dolan.  Dolan was well-known to police as a street brawler, burglar and gangster.   Dubbed Dandy Johnny, he was the Beau Brummel of Five Points—wearing expensive shoes and clothes, carrying carved canes and oiling his hair.


In the summer of 1875 James H. Noe, now 50 years old, was in the process of expanding his factory.  A new building was being constructed next door at No. 277 Greenwich Street and on Sunday morning August 22, he entered the building to check on its progress.  When he climbed to the roof he came upon Johnny Dolan in the process of stealing the lead from the gutters.  A fight ensued during which Noe, reportedly a large man, dragged the crook down the stairs; but Dolan picked up an iron pry bar and struck Noe several times on the skull.   James Noe died of his injuries several days later.


In the meantime, Talins Wells had moved into the house on Morton Street.   Two years after the beginning of the Civil War, the draft was initiated—a lottery which would change Talins Wells’ life.


At draft headquarters at No. 185 Sixth Avenue on August 19, 1863 a crowd assembled awaiting the drawing of names.  The ballots containing the names of eligible male citizens were placed in boxes.  The New York Times reported that two thirds of the room was railed off “being occupied by those who desire to witness the proceedings and ‘tremble while they hear.’”


Police were on hand to keep order.  The newspaper said that “Upon a central table is placed the wheel of destiny.”   Commissioner Lamont spun the wheel, Conklin Bishop (chosen apparently because he was blind) drew the names, and Samuel F. Sleight read the names—1,100 in all that first day.


The Times noted that “in several instances two brothers were drafted” and, not afraid to print its opinion of the draft, said that “Mr. Oscar Pillet, of the Daily News, was brought face to face with the tyranny of the Administration.”


Among the names called was Talins Wells.  He was among fifteen other Morton Street residents inducted that day, including two brothers each from Nos. 21 and 84.  Wells eventually became Chief Bugler for the 6th New-York Cavalry—a distinctive and highly dangerous position.  In October 1867 news reached the Wells family on Morton Street that he had distinguished himself by capturing the Flag of the 14th Georgia Infantry.


Following Wells, the house became the property of John Moller.  After his death it was leased from the estate by John J. McNulty.  He lived here with his wife Mary, and their daughter who taught Latin.   McNulty had graduated from City College in 1881 and in 1890 while living here the 27-year old was appointed “tutor in philosophy” at his alma mater.   About five years later, having earned his doctorate, he was made head of the Philosophy Department.

Having lived at No. 58 Morton Street for over a decade, John McNulty purchased it on December 29, 1902 for $14,900 (approximately $225,000 today).  Six years later, on May 1, 1908 John and Mary left the house early in the afternoon to go shopping.  The couple visited several stores together and then went their separate ways when John headed to Macy’s while Mary went further uptown to a dressmaker’s.


After buying a few things downstairs, McNulty took the elevator to the 5th Floor grocery department.  Dr. A. W. Allison and a woman were also passengers in the elevator.  After getting off the elevator and taking a few steps, Allison heard a man’s scream.  Rushing back he saw the elevator gate was open and, looking down, saw Professor McNulty’s body at the base of the shaft.


The New York Times reported that a group of store employees rushed to the scene and “examining the body, found that life was extinct.”  The elevator operator claimed that McNulty committed suicide.  Dr. Allison told officials “Well, I think I was the only man there; I saw nothing of the kind.”


In the meantime Mary McNulty had finished her shopping and returned to No. 58 Morton Street.  Delivery wagons came and went, dropping of bundles that she and her husband had purchased; but there was no sign of John.  Finally, around 7:00, there was a knock at the door and she was informed of the accident.


The following day The Times reported “She broke down utterly, but sent her brother, James McCabe, to make certain of the dead man’s identity.”    The article added that the 45-year old was “extremely popular with his pupils.  None of his friends believes that he killed himself.”


In 1912 the house was home to Isaac Rice, a court clerk, but by the 1940s it was an unofficial apartment house with one spacious apartment per floor.   It was during this time that No. 58 along with other buildings on the block would begin being home to artists and celebrities.


By now the stately brownstone stoop had been removed to provide an entrance at street level.  The original doorway was creatively converted to a many-paned window and, thankfully, the wonderful entrance enframement was left intact.


Artist Ben-Zion and his wife lived on the second floor.   Reportedly the couple stuffed the space with sculpture, paintings, ceramics and other art objects and artifacts collected throughout the years.


In 1968 a renovation was done of the house that resulted in one apartment each on the second and third floors, and a basement-parlor floor duplex.  At the time the stoop was reproduced; an amazingly accurate project that included the reproduction of the Greek Revival ironwork.  The Department of Buildings reserved the right to widen the street or sidewalk, noting “Reconstructed stoop is revocable at will by the Council or the Board of Estimate.”


Before long the newly-single Elliott Gould would move in.   The actor had divorced Barbra Streisand in 1971 and lived here with the 19-year old Jennifer Bogard, daughter of Hollywood director Paul Bogard.  Next door at No. 60 John Belushi was living.


Around the same time poet William Bronk shared an apartment here with Al Pew for a year.


A year-long conversion starting in 2010 brought the house back to a single-family home.   The grand, understated residence looks very much as it did when brush maker James H. Noe moved his family in in 1849.  And Department of Buildings documents still warn that the wonderful reconstructed stoop can be revoked “at will.” 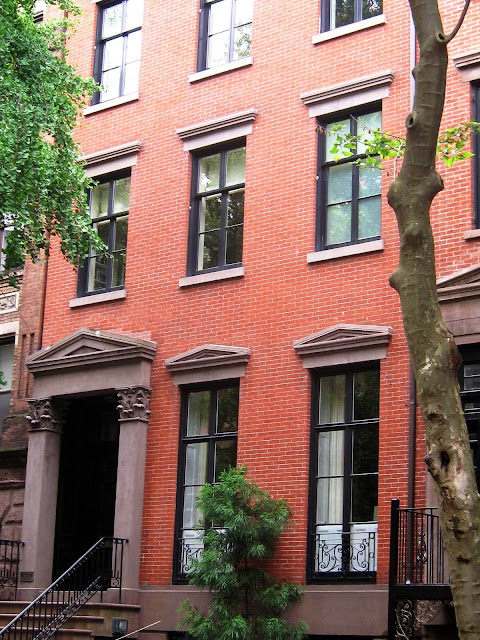 non-historic photographs taken by the author
Posted by Tom Miller at 2:22 AM