As the great retail emporiums lined New York’s Ladies’ Mile stretching from 14th to 23rd Streets along 6th Avenue, the side streets filled with an assortment of structures.  Some of them, like warehouses, were connected with to the stores.  Others were only marginally associated with the retail industry.


Among the latter group was William Vogt’s stable at No. 107 West 17th Street.  The three-story Italianate structure was a handsome take on the traditional stable design.  Constructed almost entirely of red brick, it boasted especially attractive architectural details.


The brickwork of the six piers at street level was laid to mimic rusticated stone.  They sat on carved stone bases and were capped with stone capitals that supported a wide stone entablature.   The keystones of the first and second floor were carved with simple foliate designs.  At the second and third floors, incised panels nestled between the centered, paired arched windows and the single openings on either end.   Here, at the second floor, painted signs advertised the vehicles and horses available to rent.
Four blocks to the south, at Sixth Avenue and 13th Street, was the home furnishings store of Sheppard Knapp--best known for its wide array of carpeting.  Because Victorian ladies of the 1890s expected their purchases to be delivered, high-end stores kept drays and horses.  Sheppard Knapp leased space in Vogt’s stable for its teams.


At the busiest time of the afternoon on June 21, 1893, just before 5:00, flames erupted from the bookbindery of George W. Alexander at No. 108 West 18th Street.  The New York Times reported that “When the greatest crowds were surging along Sixth Avenue, between Fourteenth and Twenty-third Streets, yesterday afternoon the fire engines dashed up to the corner of Sixth Avenue and Eighteenth Street.”


Crowds of onlookers watched in shocked suspense as flames licked out of all six stories of the structure.  “It was known that this building was a very bee-hive of industry and teemed with men, women, and girls,” said the newspaper.


As firemen on ladders rescued workers from the 18th Street side, terrified females panicked at the back of the building.  Although the entire rear façade had a fire escape, “yet four women took flying leaps from the fourth story, expecting to reach the main roof of Sheppard Knapp’s stable at 109 West Seventeenth Street,” reported The Times.  “They all missed their calculations and were seriously injured.”


Young Annie Timmins landed flat on her back on the extension shed behind the stable, “rolled off the shed and struck a dog kennel, afterward falling to the ground.”  Her spine was fractured and she died.


At the same time Mary Fitzpatrick jumped, landing in the rear yard of Vogt’s stable.  She sustained severe internal injuries and was taken to the New-York Hospital.  The other two jumpers, 48-year old Mrs. Hannah Van Orden and Mary McNamara were also injured.  Like Annie Timmins, she landed on the shed, wounding herself.  The McNamara girl broke her leg when she landed in the stable yard. 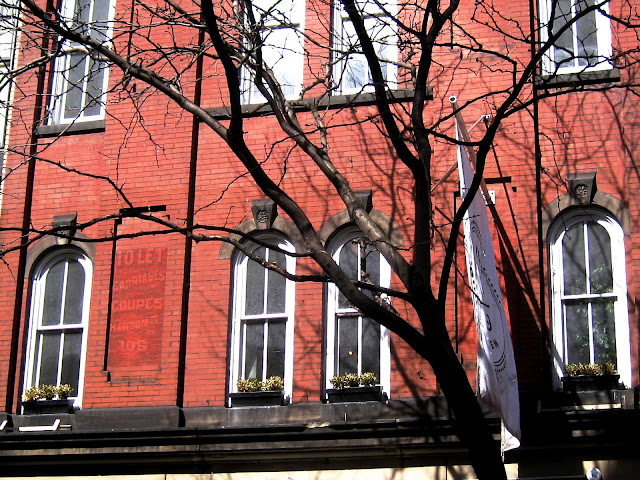 Vogt also ran an express office from the stable, receiving luggage and packages from steamers then either storing or delivering them.   His service became entangled in a missing person mystery the year shortly after the bindery fire.


On September 14, 1893 20-year old Freida Kleinsteuber arrive in Hoboken on the Dania.  She had five heavy pieces of baggage which, peculiarly, were sent to different express companies in different areas of the city.  One trunk was consigned to Vogt’s operation on West 17th Street.


The girl was on her way to visit Mrs. Mary Ernst in Chicago.  But she never arrived there.  When the girl’s brother wrote Mrs. Ernst in December to inquire why his sister had not yet written, the woman panicked.  She cabled back explaining that she was unaware that Freida had arrived in the country.


By March 1894 there was still no word of Freida’s whereabouts.  A friend told The Evening World “we are afraid that she has met with foul play or that she may have been made the victim of some evil woman.  She can speak English and French, and willingly, we are sure, she would not adopt a wicked life.”


William Vogt told investigators that the one trunk “remained here for a month until one day a pretty blonde little woman called for it, and, showing the proper checks, asked that it be sent to some house uptown.”


Vogt no doubt frustrated detectives when he was pressed to show the date or delivery address.  He “found he found he had omitted to make an entry of the date of the transaction or the house to which the baggage had been sent,” reported The Evening World.


Stables, with their ample quantity of hay and other flammable articles, were often the scenes of fire and Vogt’s was no exception.  On February 6, 1885 three horses were burned to death in a fire in the rear of the building.


As the era of the horse and carriage passed, the many stables in New York were used as garages for motorcars, altered for business purposes, or simply razed.  In January 1941 Benjamin Schachter, a furniture manufacturer, leased the building from the Gazba Realty Corporation for its operation.


The grand emporiums of the Ladies’ Mile, in the 1960s, were dusty, vacant fossils and the glory days of Sixth Avenue were a faded memory.   The old stable building on West 17th Street was home to Norman Lerner’s photographic studio.   He gave classes here in “photographic esthetics.”


During the 1970s the Asian decorative arts store, Miya Shoji, took the first floor.  Exotic screens and decorative household goods were sold in the space once occupied by coupes and horses. 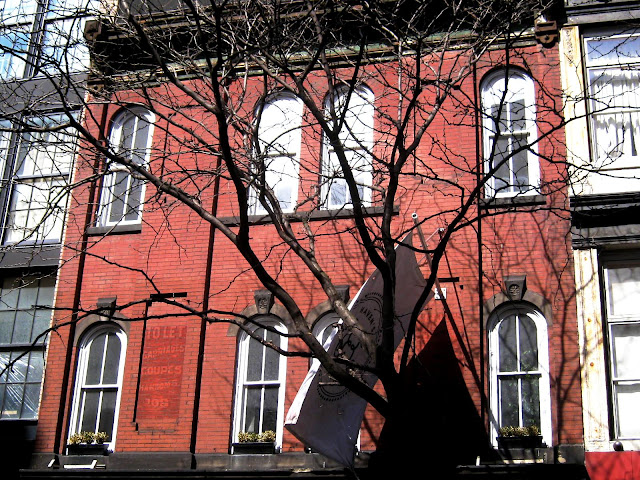 Then, as the 21st century neared, the Ladies’ Mile experienced a renaissance.  The expansive department stores were rehabilitated into new uses as residences and retail outlets.  No. 107 West 17th experienced its own renovation that included a harsh façade cleaning that wiped away the century-old advertisements.


In the 1990s the Tuscan restaurant Ristorante da Umberto was here; an upscale eatery that catered to the trendy new crowd that roamed the reborn Chelsea neighborhood.


Then, with the new century, a remarkable thing happened at the second floor of William Vogt’s stables.  The stubborn painted Victorian signs leached out of the brick façade.  Considered lost, they once again announce to the passerby that victorias, coupes and horses are available inside.


photographs taken by the author
Posted by Tom Miller at 3:09 AM