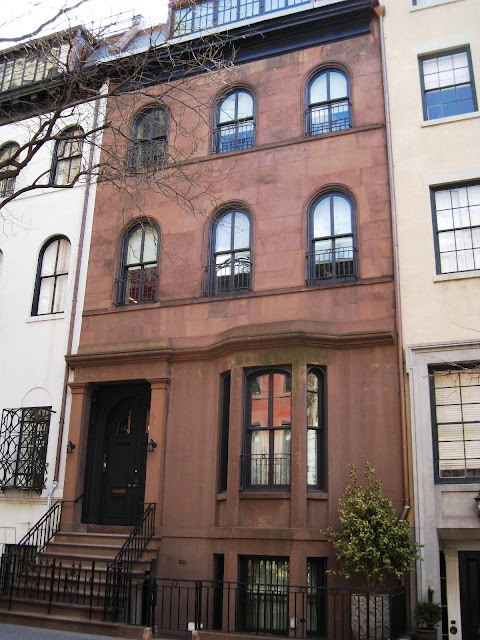 In 1859 builder-architect Isaac Greene Pearson was living at No. 12 West 9th Street on an increasingly-affluent block.   While Person’s office was far downtown at No. 8 Wall Street, he was highly active in the Greenwich Village area.


That year he was completing a project close to home—the three new houses abutting his own house—Nos. 14 through 18.  The 25-foot wide residences would house well-to-do families who were attracted to the fashionable block off Fifth Avenue.


Like its neighbors, No. 18 was designed in the latest Italianate style, while holding on to some elements—like the entrance--of the earlier Greek Revival.  Three stories high over a deep English basement, it the house an angular bay window on the parlor floor and elegant arched openings on the floors above.


Following the Civil War wealthy businessman John J. Anderson lived here.   After becoming named receiver of the Continental Life Insurance Company, Anderson ran into legal difficulties when he was accused of fraud.    His attorney argued defiantly for him on April 1, 1877 calling the claim “absurd” and telling the court “There is not a particle of evidence to sustain any such allegation, and it is a wicked and slanderous perversion of the evidence to assert it.”


As Treasurer of the Electric Manufacturing Company a few years later Johnson was back in court, this time on the more favorable side of the law.   One of the company’s electricians, William E. Sawyer, had “shot Dr. Theophilus Steel through the nose, near the Rossmore Hotel,” as reported by The New York Times on October 1, 1881, and Anderson was obliged to provide bail.


Following Anderson the house was briefly home to James M. Whiton.   Whiton had a near-obsession with having his political and social ideas made known and did so with copious letters to the editor of The New York Times that continued for decades.    One such letter, written from No. 18 in October 1891, ranted on about the rights of American Protestant missionaries on the Pacific island of Ponape who had been dispelled by the Spanish.


A year after the Ponape letter was printed Albert Blauvelt and his family had moved in.  A marine electrician, Blauvelt worked for the Edison General Electric Company and turned his engineering expertise to fire prevention.   The American Society of Mechanical Engineers would later say that he “was among the pioneers to bring into prominence the profession of fire-protection engineering and in that profession he was recognized as an authority.”


That expertise led to his being lured away to the Western Insurance Association in Chicago in 1894.


That same year 22-year old Albert F. Hunt, Jr. graduated from the Massachusetts Institute of Technology.   Upon graduation from the New York University Law School in 1898 the wealthy bachelor opened his law practice under the name of Hunt and Ingle at No. 220 Broadway and made No. 18 West 9th Street his home.


Like Whiton and Blauvelt, Albert Hunt would not stay long in the 9th Street house.   The enterprising Elizabeth Spears called it home when she started her own business, the Unique Hat Company, with partner Ira Richard Adler early in 1901.


Adler financed the business and Elizabeth, who knew about feminine hats, ran it.  As a matter of fact, her backer did not even have a key to the office.   Things went well for a few months, then the pair had a disagreement that landed them in Supreme Court.


While the case was still pending Adler arrived at the Unique Hat Company and asked Elizabeth for a key to the office; a request she flatly refused.  Adler then sent for a locksmith to replace the lock.  The feisty Elizabeth Spears stood in the hall with her back to the door so the worker could not get to the lock.


Then things got ugly.


According to The New York Times on September 11, 1901, “Mr. Adler then, she alleges, grasped her roughly by the arm and threw her with great force against the wall, injuring her so badly that she had to call in the aid of a physician.  Mr. Adler said he had no intention of hurting her, but that he thought he had a right to have a key to his own office, and he wished merely to get her away so that the locksmith could proceed.”


Hope for the success of the Unique Hat Company was slim, as reflected in the foreclosure sale of No. 18 West 9th Street later that year. 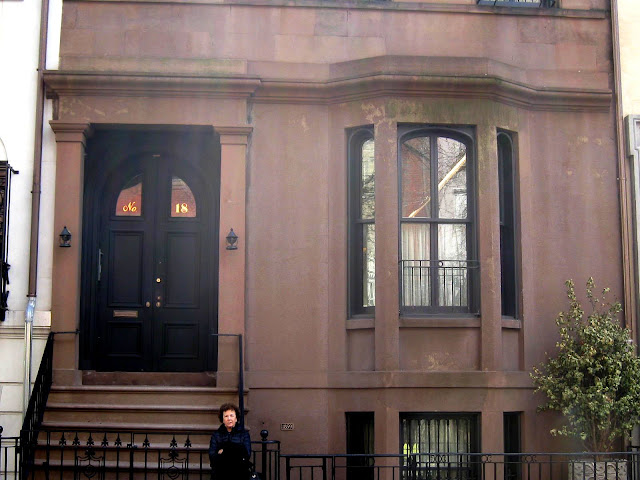 The house was quickly turned over—purchased by W. E. Finn who sold it the following year to Samuel Woolsey Carmalt.   The attorney, whom The Scranton Tribune referred to as “a wealthy and talented member of the bar of New York City,” owned a summer estate, “Lakeside,” near Montrose, New York.


On February 5, 1914 the 51-year old Carmalt married 38-year old Marguerite Lawrence Churchill in an understated ceremony in the Chapel of Calvary Church.   “Miss Churchill, in traveling dress, was unattended, and Mr. Marmalt had no attendants,” said The Times.  “the immediate families and a few friends only were present, about twenty in all.  After their wedding trip Mr. and Mrs. Carmalt will live at 18 West Ninth Street.”


Little Woolsey Carmalt was born the following year, followed soon by his sister.


By 1926, however, the house had changed hands yet again.   Edwin W. Coggeshall, the 84-year old found and Chairman of the Board of the Lawyers’ Title and Trust Company now lived here.  The elderly businessman--a descendant of one of Rhode Island’s first settlers, John Coggeshall who arrived in 1630-- was still active in business.   That summer he played host to a visiting friend, R. C. Hamilton of Leeds, England, who made his 144th Atlantic crossing to visit Coggeshall.


Coggeshall had not only made his mark as a prominent lawyer , but as a real estate expert.   He maintained his memberships in several esteemed clubs, like the Century Association and the Grolier Club, despite his advancing age.


The house was filled with priceless and historic items he had collected through the years.   In the library were eleven first editions of Charles Dickens as well as a stool that had belonged to the author at Gads Hill.  One of Coggeshall’s prized possessions was a chair used in the White House by President Abraham Lincoln.


While several of the proud homes along the block had already been divided into apartments, No. 18 remained a single-family home.  The family of Dr. Charles W. Gerstenberg, co-founder and Chairman of the Board of Prentice-Hall, lived here in the 1940s and ‘50s, as well as their summer estate in Seatucket, Long Island.  Dr. Gerstenberg died in the Long Island home in September 1948 at the age of 66.


The Gerstenberg’s daughter, Mary Gerstenberg Hulitar, gave birth to a daughter in the house in 1952.  But the single-family status of the old home would not last much longer.


In 1954 the Gerstenberg estate sold the house and three years later a renovation was completed.  Throughout the rest of the century there would be four spacious apartments in the building.


Although much of the exterior detailing was shaved flat in a mid-20th century attempt to de-Victorianize the house, much of the interior was preserved.  In 2006 actress Uma Thurman purchased the 147-year old residence for $9.5 million and began a reverse-renovation.


Three years later the house was once-again a single family dwelling.   But like so many of its owners, Thurman would not remain here long.  In 2011 she sold the house to the CEO of fragrance company Parfums de Coeur, Edward Kaminski, for $12 million.


The two houses built at the same time, Nos. 14 and 16, have been sadly altered.  Yet No. 18 retains much of its original flavor; a haunting echo of when ante-bellum skirts swept up the entrance stairs and smart carriages waited at the curb.