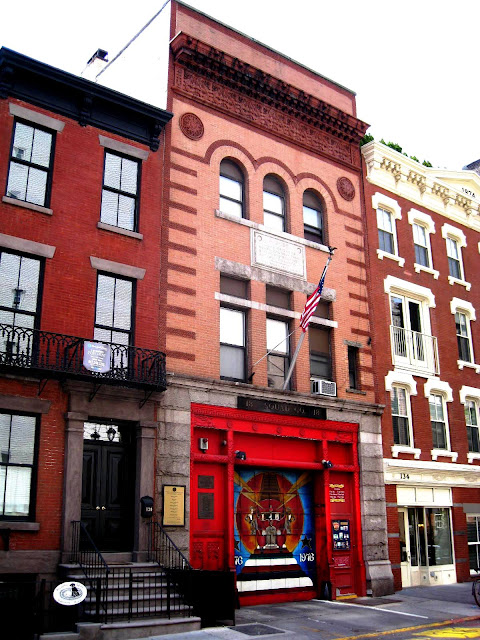 By the last decade of the 19th century, the booming population of Greenwich Village required increased fire protection.  In 1891 the city purchased the old rooming house at No. 132 West 10th Street as the site of a new firehouse for Engine Company 18.


N. LeBrun & Sons was responsible for the design.   Since 1879 Napoleon LeBrun had been designing all of New York City’s fire houses—around 40 of them so far.   For this narrow firehouse he turned, mostly, to understated Romanesque Revival.  The first floor was composed of rough-cut stone blocks surrounding a cast iron frame for the double wooden truck doors.


Above, orange brick was highlighted by terra cotta, with stone trim at the window openings.   LeBrun creatively used brown-orange terra cotta tiles, looking much like Lego blocks laid on end, to create handsome pseudo quoins along the sides and an outline above the arched windows of the third floor. 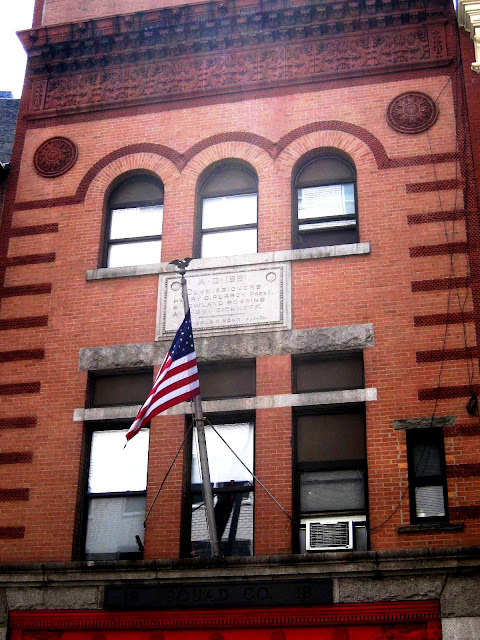 
Engine Company 18 moved into the completed building in 1892.   Its horse-drawn engines would be seen speeding through Village streets for decades; often narrowly avoiding street cars, pedestrians and other vehicles.


On September 29, 1907 one such run nearly cost fireman John J. Harvey his life.   Harvey was riding on the step of the tender, or hose wagon, on way to an alarm at Washington and Christopher Streets.  The tender was just behind the speeding engine and both trucks were clanging their bells.
In the meantime, motorman Frederick W. Unkelman was running his streetcar along 10th Street without slowing or stopping for the emergency vehicles.  Finally, at Washington Street, he paused long enough avoid a collision with the engine; but as it passed he started up again.


“When the tender came tearing along in the wake of the engine the driver had great difficulty in steering through the narrow space between the curb and the car.  His horses barely got through, but the car, keeping on, swung still more out over the roadway and struck the wagon broadside,” reported the New-York Tribune.


The collision knocked Harvey off his feet and his legs and feet smashed through the streetcar windows.  “He pluckily held on until the tender cleared the car,” said the newspaper.  “With the worst of the danger over, he dropped to the street and stooped to pick up his hat, but then his strength gave way and he toppled over unconscious.”


The motorman was arrested and, ironically, the call turned out to be a false alarm.


Earlier that year, in February, Engine Company 18 had responded to a call that was most definitely not a false alarm.  Nearby the old Tracy & Russell Brewery building at 11th Street and Greenwich Avenue caught fire.  It was now being occupied by the Manhattan Screw and Stamping Company and the lunchtime blaze spread rapidly.  Most of the 300 employees were out at lunch, and those left in the building were able to escape.  But the growing inferno was dangerously close to Grammar School 41 with its 1,400 little girl pupils, and the House of Calvary on Perry Street near Greenwich Avenue, a cancer hospital.


Engine Company 18 worked feverishly to keep the flames from spreading, as the crowds of terrified little girls were led from their school building.  “The fight to keep the flames from reaching the cancer hospital was long and hard,” reported The New York Times.  “Three  firemen, under the direction of Capt. Roach…were overcome while clinging to the fire escapes and training streams of water on the flames that constantly menaced the walls of the House of Calvary.  They quickly revived and returned to the fight.”


The one hundred horses in the stables on the first floor of the burning building were rescued; but in the end the building was in ruins—a loss of about $100,000.


The company’s sterling reputation came into play during the visit of Raoul Frere, the head of the Paris Fire Department in August 1910.  He spent a week studying the operations of the New York City Fire Department and told reporters that “the New York firemen were ahead of those in London and the big European cities.”


On August 19, after being escorted by Engine Company 18’s Captain Howard Rusch to observe night court, the French fire chief came back to West 10th Street.  Here he “and remained there all night in order to answer all alarms with the apparatus,” said the New-York Tribune.


The unit responded not only to nearby emergencies, but traveled across town when necessary.  Such was the case on Saturday March 25, 1911 when the Asch Building caught fire.   Home to the Triangle Shirt Waist factory, the fire would result in one of America’s worst industrial tragedies with 146 fatalities.


The female workers trapped in the burning 10-story building panicked and scores threw themselves to their deaths.   One young fireman from Engine Company 18 later told reporters that his first image “was a man’s body come crashing down…We turned into Greene Street and began to stretch in our hoses.  The bodies were hitting all around us.”


The first two decades of the 20th century were plagued with terrorist attacks by anarchist groups like the Black Hand.   Business buildings and even apartment houses were targeted for bombings; one of which was thwarted by a quick-thinking Engine Company 18 fireman in 1910.


Joseph Halpin, on leave of absence, was passing a building when he noticed a small fire.  He entered only to find the structure was filling with gas from open lighting jets.   He blew out a lighted candle that was connected to a blasting fuse which led to a bomb filled with gunpowder.


The terrorist, Andrea Galasso, had attempted to level the structure.  He was sentenced to Sing Sing Prison for four and a half years.  Fireman Halpin received a medal from Mayor Gaynor.


By the roaring 1920s Greenwich Village was not just the center of bohemian cafes and tea houses; it was still a close-knit neighborhood of families and children.  The firehouse on West 10th Street was a familiar summer haunt of the youngsters who “come to the engine house in their bathing suits to prance under the street showers,” said the New-York Tribune in 1921.


That was the year that the firemen had an idea.  The members pooled $50 of their own money to purchase materials and five firemen—Engineer Patrick Vak and Firemen Peter Brennan, Patrick Foley, Dennis Collins and Joseph Lally—designed and built a “portable swimming tank” for the children.


The Tribune said “The tank is an elaborate affair made of wood, with steps leading to the top of it and slides to carry the kids into the water.  It is set on wheels and it is planned to be rolled under the shower.”


The “perambulating running water swimming tank” was a hit and by the end of July the Tribune reported that “many hundreds of children daily” used the pool.   And so the adults wanted to get into the act.


Engineer Frank Patzak told reporters on July 24 “We already have a good many women and girl bathers.  They appear for their shower baths after the kiddies have all been tucked into bed…We have had a heavy demand from adults for use of the big tank between 10 and 12 at night.”


So the firehouse hosted “grown-ups’ evening” on July 26, 1921 and “the whole of Greenwich Village was expected to take a splash,” said the Tribune.  “Most of the inhabitants did turn out, but they came as spectators.”


Crowds jammed West 10th Street hoping to glimpse flappers in their bathing attire.  “Four young women appeared in bathing suits and splashed in the water for a while, but before their frolic was over the spectators had found the well-advertised spectacle rather tame, and flocked back to the underground tearooms.”


All the publicity caused Fire Captain James Simms to shut down the swimming tank, even for children.   When 400 neighborhood children showed up, they were told there would be no more swimming.  A meeting of parents was called, appealing to Fire Commissioner Drennan “asking for immediate restoration of the tank,” and "hundreds of children staged protests.”


“The shouting of the children’s chantey, ‘We want our tank’ to the tune of a hymn with which all the little Italians and other children of foreign born in the districted appeared to be familiar, drew hundreds of persons to the locality,” reported the New-York Tribune on August 1.  “When the youngsters were ordered to move on by patrolmen they formed a line and paraded in bathing suits timing their steps to the monotonous repetition of 'We want our tank.’  The manifestation of juvenile displeasure lasted until late in the evening.”


As it turned out, the children did not get their tank back and things returned to normal at Engine Company 18.


On October 18, 1966 the Engine Company responded to a particularly lethal blaze on West 22nd Street and Broadway.  It would be the darkest day for the company to date.  The old converted brownstone buildings were engulfed, necessitating a response from not only Company 18, but Engine Company 5, Ladder Company 7 and Ladder Company 2.


While the fire fighters struggled with the blaze, the cellar was becoming an inferno, unbeknownst to the crews inside.  At the last minute a cry of “get out, get out” was raised, but it was too late.  “All at once, with a thunderous crash, a 20-by-5-foot section of floor gave way.  There was a burst of flame that rolled along the ceiling of the drugstore and flared out into the street,” said The New York Times.


In the worst disaster in the Fire Department’s history, twelve firefighters were killed that night.  Of the seven members of Engine Company 18 to respond to the blaze, only two returned; Fireman John Donovan who arrive d late, and Fireman Manuel Fernandez who was connecting hoses in the street.


In 1976 the country was taken with renewed patriotism as the nation’s bicentennial was celebrated.  For its part Engine Company 18 painted its baydoor—now a single garage-type door that replaced the originals—with a remarkable mural depicting a fire engine heading forward along a red, white and blue path. 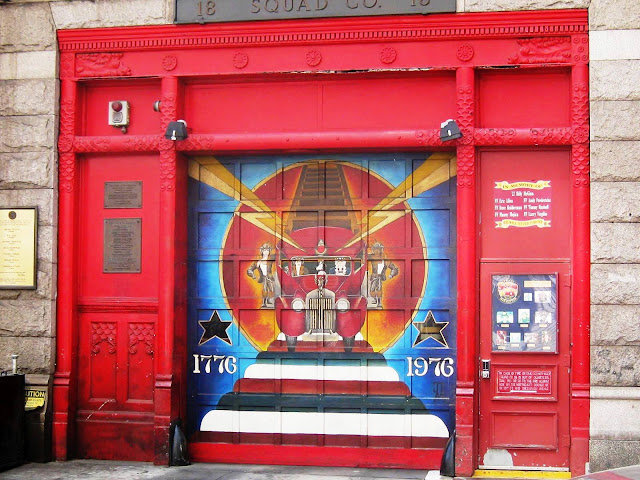 The vibrant, colorful mural became a Village landmark and the City of New York budgets funds each year for the restoration and preservation of the urban artwork.


As terrorism and the threat of hazardous materials attacks grew, the City responded by increasing its specialized units trained in handling hazardous materials and weapons of mass destruction.  On July 1, 1998 Engine Company 18 was designated Squad Company 18.  It would not be long before the new squad’s training and expertise would be called upon.


The tragedy of the fatal 1966 fire was surpassed on September 11, 2001 when terrorists flew airliners into the World Trade Towers.   Eight brave men from Engine Company 18 who rushed to the aid of the innocent civilians targeted in the mindless attack were lost.


LeBrun’s handsome firehouse is little changed since it opened in 1892.  It is a familiar Village landmark that has seen joy and tragedy and, briefly, a few women in bathing suits. 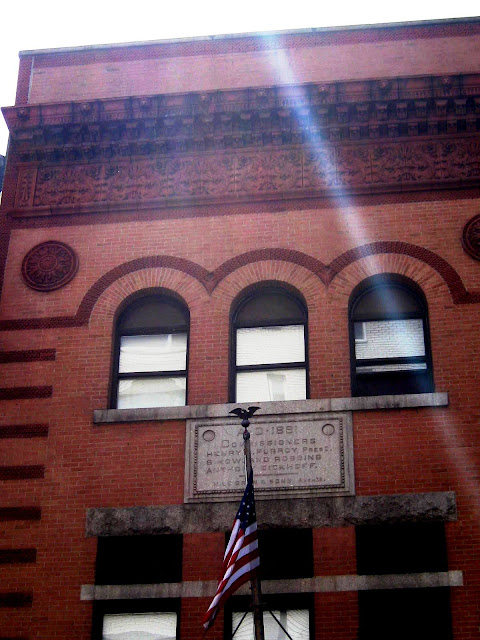 contemporary photographs taken by the author
Posted by Tom Miller at 2:34 AM