The Hawes Building - No. 872 Broadway 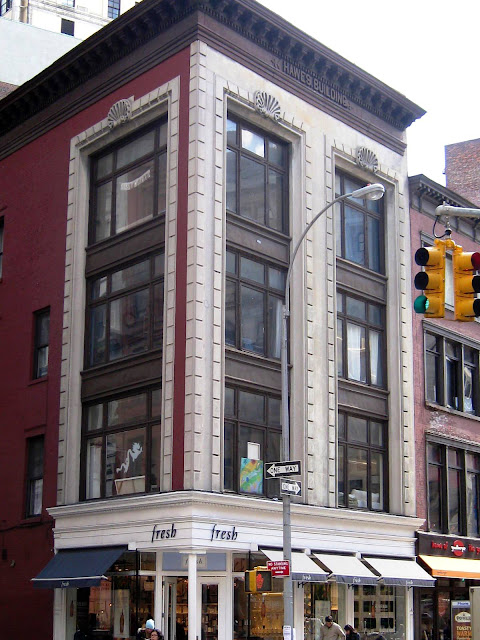 Things changed quickly along Broadway just north of Union Square in the decades prior to the Civil War.  In 1847 the Manhattan Bank Company began construction of a block-long row of brick-faced houses that stretched from 17th to 18th Street on the east side of Broadway.


Completed a year later, the commodious homes were four stories tall and three bays wide—except for No. 872.  The house at the corner of 18th Street was a bit grander and wider with an additional bay—a full 34 feet.  In 1849, a year after the row’s completion, O. Cammann purchased Nos. 872 and 868.  The enterprising Cammann would soon convert the dwellings to income-producing properties.


Among the first commercial tenants was George C. Anton’s “Classical French and English School.”  An advertisement in the New-York Tribune on November 26, 1857 boasted of six assistant teachers and a “teacher of Gymnastics.”  In addition to the regular classes, there was a Primary Department for boys from 6 to 8 years of age.  The ad promised “lessons as far as possible taught in School.”


By the time of the Civil War Samuel P. White had established his doctor’s office here.  The physician kept an enviable schedule of office hours, 8:00 to 9:00 am, and 2:00 to 6:00 pm.  It would appear that at the same time at least one set of rooms was let out for residential use.


In 1865 a scandalous affair made the news involving a couple living here, apparently out of wedlock.   Around 1850, the “petted son of a millionaire,” as arcanely described by The New York Times in 1865, “wooed and won the beautiful and accomplished niece of an Ex-President of the United States.”  The couple lived happily for ten years, then the wife learned that her husband was having an affair with an opera singer.


Despite her pleadings to her father-in-law, who eventually disinherited his lothario son, The Times unsympathetically reported that the cad continued to pursue “the siren of the sock and buskin,” and left his wife.


When that affair fizzled, he “engaged several young women in correspondence,” finally settling on a married woman, Mrs. Emily Florence Elliott.  On August 14, 1865 the couple was living at 872 Broadway when the wronged wife discovered their whereabouts.


When all three appeared in court a dramatic scene unfolded worthy of any Victorian novel.  “The real wife, pale and haggard, suffering under that intense grief which refuses to yield a tear of relief, measured her words, but put them firmly, demanding of her husband whether she were his wife; whether she had been ever faithful and kind, and whether she had given him cause to abandon her; and the penitent sinner confessed in presence of his enciente victim, whose indignation knew no bounds.”


The husband was fined $500 for abandonment and the newspaper felt he would be released “with his wife and henceforward conduct himself as a faithful husband.”


Not long after the scandalous affair, No. 872 was physically connected with No. 28 East 18th Street to the rear as the building filled with photography studios and related businesses.  In 1870 J. N. Gimbrede, “card engraver, stationer and importer of fancy goods,” was here.  That year Gimbrede published a small booklet on Card Etiquette that prompted The Southern Review to note “This little book contains the whole code of card etiquette, as well as the finest specimens of all the different kinds of cards,--business cards, visiting cards, wedding cards, menu cards, cards of announcements, cards fo balls, cards in memoriam—in short, all sorts and descriptions of cards, except inelegant ones.”


The booklet was, according to the magazine, “a safe guide to all who would shun errors of taste, breaches of card etiquette, and, above all, the awful ban of the reigning fashion!”


As for Gimbrede, he was said to be “well known to the polite world, for his exquisite taste and skill as an engraver.”


Other photography studios here at the time were those of J. Gurney & Son and Abraham Bogardus.


Bogardus was especially prominent in the field and while here he would photograph Presidents James A. Garfield, Ulysses S. Grant, Rutherford B. Hayes and Chester Arthur.  Governors, writers and other prominent citizens sat before his camera—among them William Cullen Bryant, Jay Gould, Henry Ward Beecher, and, amazingly, the camera-shy William H. Vanderbilt. (New York’s Great Industries remarked “Mr. Bogardus took the only picture that Mr. Vanderbilt has ever allowed to be sold.”)


By 1884 the reputation of Bogardus was well established.  New York’s Great Industries called him “the leading photographer of our presidents, senators, congressmen, clergymen and men of note in the various walks of commercial and social life.  The best pictures of Arthur, Blaine and the late President Garfield ever taken, are those of Mr. Bogardus.”

Working with Bogardus for a period was O. W. Heffer.  The British native whom Illustrated New York called “of pleasing manners and strict probity” came to New York around 1878.  In 1887 he decided to strike out on his own.  Heffer opened a large photography studio and gallery in the same building as his former employer.


Illustrated New York: The Metropolis of To-Day wrote of his large office and staff here in 1888.  “The premises occupied, including office, reception parlors, gallery, and operating-rooms, are spacious and commodious, and are handsomely appointed and completely equipped with the latest improved apparatus, devices, and general appurtenances, while from six to ten competent and courteous assistants are in regular attendance.  Photography in all its branches is executed in the highest style of the art, crayon, pastel, India ink, oil, and kindred artistic work being done in the most superior and expeditious manner, while popular prices prevail, fine portraits being the specialty, and altogether a very extensive and influential patronage is received.”


The publication made note of his Broadway studio and gallery, saying there were “elegantly and artistically fitted up and furnished, possessing the finest possible facilities for the practice of his art.”


By now Dorcas—A Magazine of Woman’s Handiwork had been published from No. 872 for nearly a decade.     The equivalent of a crafts magazine today, it offered readers patterns for knitting and crocheting lace, infant’s skirts, tidies and shawls among other things.


In 1883 Good Health recommended the February edition of Dorcas for its “excellent article on Home Decoration.”  The editor added “we wish to commend these articles, as they will enable one with a small amount of material and moderate skill to make a handsome house at little cost.”


A year later Dorcas introduced a companion magazine dealing solely with knitting.   The Continent felt it was a wonderful idea, especially for the infirm.  “For an invalid it is always a resource, and a ‘new stitch’ is almost as important a matter as a new remedy, and if fascinating enough, may even do away with the necessity for the remedy,” it said.

The street level retail space was home to Edward J. Dewey Lamps by 1894, renamed as Dewey & Johnson Lamps three years later.  As the turn of the century approached the apparel and millinery district inched up Broadway.    Perhaps the first indication here was The Cosmopolitan Shirt Store in 1899.  Upstairs the same year was Westlotorn’s Detective Agency.


After more than half a century of family ownership, Oswald Cammann sold the building to James W. Ketcham.

The Whitcomb Metallic Bed Company was here on November 17, 1900 when an earth-rattling manhole explosion occurred outside.  A cable car had just passed over the manhole cover and the passengers “many of them women, rushed for the street.  The conductor quieted them, however, and no one was injured,” reported The New York Times.


Exploding sewer gas sent the manhole cover several feet in the air and the blast shattered the large plate glass window of Whitcomb’s.  “Many hundred dollars’ worth of plate glass was broken,” said The Times.


James Ketcham was unable to make payments on the property and in January 1901 it reverted to Cammann in foreclosure.    Cammann quickly turned the building over to B. F. Hawes.


Hawes started an extensive renovation project to bring the old converted house into the 20th century.  He commissioned architect Frederick Jacobson to refurbish the structure into a modern commercial building.  The result was significant. 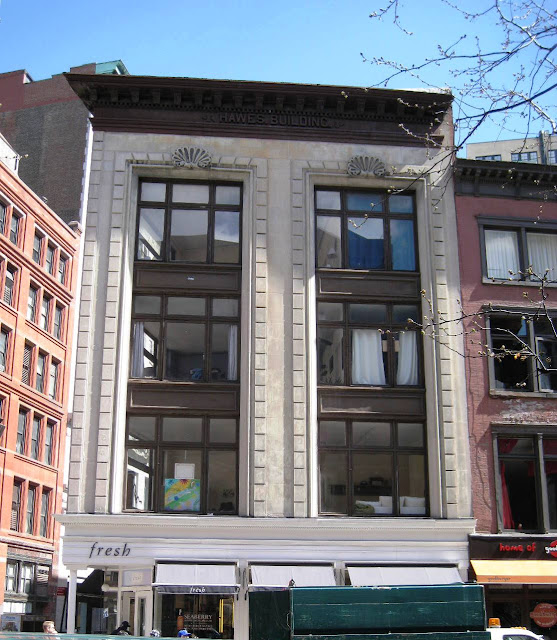 Jacobson stripped off the brick façade and replaced it with stone that framed two three-story tall bays.   Around corner the architect left the old brick, but repeated the stone-framed show windows for continuity.  Large, elegant open shells added flourish to the carved moldings.  Above it all, an overhanging cornice on the slightly heightened façade announced HAWES BUILDING.


The refurbished building had a variety of tenants.  In 1903 mining broker J. A. Fysh had his office here.   Plymouth Raincoat Company moved in and by 1917 Mort Peoples, an electrician, was doing business here.


Along with Plymouth Raincoat more and more apparel companies appeared.  In the 1920s Panama Neckwear, makers of men’s silk neckties and cravats, was here.  At the same time La Mode Hair Net Company was a tenant as well as the Highgrade hair Co., which also dealt in hair nets.  Hazelkorn Brothers, button wholesalers, was in the building in the 1930s.

Within the next few years the Garment Center would move northward and No. 872 Broadway would slowly become home to small companies, not all of them reputable.  In 1988 Customs agents seized a shipment of 500,000 crack stems imported by Freedom Imports.  The firm cleverly tried to avoid notice by invoicing the drug paraphernalia as “glass beverage stirrers.”


While the street level of the Hawes Building has been substantially altered, the upper floors are intact.  A glance at the four buildings to the south, survivors of the row of one-matching houses, provides an idea of the original appearance of No. 892 and of the residential character of the block in 1847.