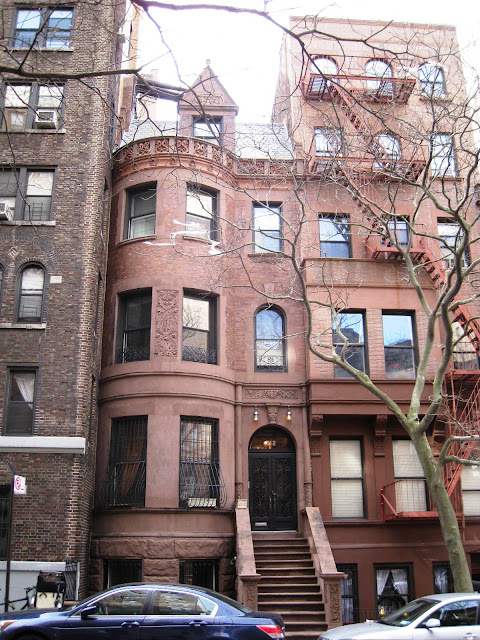 As road were improved, sewers laid and mass transit extended to the Upper West Side in the last two decades of the 19th century, development of the area was feverish.  Speculators commissioned architects to design full blocks of harmonious residences in the latest styles.  Real estate marketers boasted that the new homes in the neighborhood were individual—not like the cookie-cutter brownstones found elsewhere in the city.

Among such rows of homes erected in the 1890s was the romantic string of rowhouses on the south side of West 104th Street between Riverside Drive and West End Avenue.   Designed in what Victorians would sometimes deem “a happy mix of styles,” the architect used a happy mix of materials as well.  Brownstone, brick and terra cotta combined to create a quixotic row of turrets and bays, capped by a long mountain range of peaks and gables. Each flowed into its neighbor, all connected by a matching ornamental band of terra cotta at the cornice line; yet each was unique.

Among them was No. 312 with its high brownstone stoop, bowed turret-like three-story bay, and a slate-shingled roof punctured by a single brick and terra cotta dormer.  Real estate dealer Paul Hoffman and his family had been living with his parents at No. 454 West 23rd Street.  Now he moved his family to No. 312.  To reduce the long commute to his office at No. 183 Delancy Street, Hoffman also used the 104th Street address for business purposes.

Following Hoffman’s death attorney Albert J. Appell purchased the house from his estate in September of 1915.  Interestingly, Hoffman’s son, J. C. Hoffman, lived directly across the street at No. 313 at the time.  The 48-year old Columbia-educated Appell was a successful real estate attorney.  Because he gave pro-bono legal advice to his father, real estate operator J. Jacob Appell, the two shared an office on West 23rd Street.  Two of Albert’s sisters worked in the office for their father—Amanda had worked here for 14 years and another sister for 24 years.  The working relationship had gone pleasantly among the Appell family.

On the day after Christmas, three months after Albert moved into the 104th Street house, J. Jacob Appell died.  It signaled the end of loving relations among the Appell family.

The estate consisted mostly of Manhattan real estate along with a summer estate in Westchester County and was valued at around $800,000—a tidy $13 million today.  Albert and Amanda were named as joint executors.  And they immediately butted heads.

The siblings were now jointly in charge of running the real estate company.  Because Amanda had been involved in the firm while Albert had busied himself with his law practice, she was incensed when he almost immediately attempted to fire two long-term employees, a rent collector and a carpenter.  And things got worse.

“The relations became so strained that the executors would not speak to each other, but communicated in writing, although both were present in the same office,” said court documents.

Every petty detail in the running of the real estate business or the execution of the estate resulted in a battle.  Although Albert was providing legal services to the estate for free, Amanda insisted on an outside attorney.   New York State court records indicated that Albert “stated to Amanda that he was willing to consent to the employment of any reputable attorney, except Gustav Lange, Jr., and would abide by his advice.  Thereupon Amanda immediately employed Lange.”

The infighting ended up in court in August 1916 when Amanda sued her brother for $9,500 with interest “upon certain promissory notes.”  To retaliate, Albert admitted the debt and counterclaimed for $36,000 “for services rendered to his father in his lifetime in management of his property.”  The court declared “The unfortunate differences of the trustees over minor matters of administration of the estate finally reached the stage where there was danger of property of the estate being sold under judgments of foreclosure…although there were ample funds in the bank to meet the payments.”

Three years later the battle still raged and Amanda recruited her sisters to her side.  The women sought to have Albert removed as executor.  The Sun reported on June 22, 1919 that “In his report Referee Quigg says that he believes the waste of the estate assets, which Miss Quigg [Amanda] charges against her brother, was due solely to disagreements between the executor and the executrix and to the quarrels in which different members of the family joined.”

In the end, Albert resigned his position as executor and the court referee removed Amanda, for the sake of the estate.  He moved his law practice to No. 36 West 44th Street and, one can imagine, family get-togethers came to an end.

For nearly four decades Albert Appell and his wife divided their time between the 104th Street house and their country home in Purdys, New York.  One by one their seven children—four daughters and three sons—married and left the family home.  On October 1, 1950 Albert died after an extended illness at the age of 83.

Six months later in April 1951 Charlotte H. Appell sold the house to illustrator Norman Saunders for $25,000.  Saunders was a prolific artist who produced the dramatic and sensational covers for men’s adventure magazines, comic books and paperback books.  Saunders used No. 312 as his family’s home as well as his studio.


The tireless artist could crank out, at times, two paintings a week; sometimes producing more than 100 a year.  His amazing output created a comfortable lifestyle for himself and his family.

A major commission came along in 1958 when the trading card company, Topps, hired him to correct baseball cards of traded players.  Saunders would deftly paint over the old uniforms, changing them to those of the new teams so they did not have to be rephotographed.

Norman Saunders died in 1989.  By now the long street of homes had suffered the 20th century.  Many had been razed for modern apartment buildings and most had had their stoops and much of the ornamental detailing shaved off.   The house at No. 312 was converted to apartments—one per floor.  Five years later, in 1994, it was renovated again, this time to a two-family home.

Among  the survivors of the old row of homes, No. 312 is the best preserved; most likely because it had only three owners in nearly a century.  It remains a picturesque reminder of a time when the Upper West Side was a hot spot for adventurous homeowners.


photographs taken by the author
Posted by Tom Miller at 2:45 AM

Email ThisBlogThis!Share to TwitterShare to FacebookShare to Pinterest
Labels: upper west side