In 1908 the old Saranac Hotel, built in 1874, sat at the corner of Broadway and 41st Street, extending the full block to 7th Avenue.   That year architect and interior designer Henry Erkins and restaurateur John Murray came up with an idea.  They would transform the hotel into a showplace—an exotic Babylonian-inspired restaurant and night club like a silent movie set.


Erkins had already designed Murray’s elaborate Roman Gardens; but this project would go much farther.  Along with other investors, the pair spent millions of dollars to create the Café de l’Opera-- what would become the most lavish and visually-staggering restaurant in New York City.


Erkins oversaw work by Stern Brothers Department Store, which acted as general contractor, as the bills for interior decoration and renovations mounted to a staggering $1.25 million—nearly $30 million today.    Adding to the cost was the $250,000 worth of silverware and artwork like the immense painting of “The Fall of Babylon” by George Rochegrosse above the staircase.    Rochegrosse’s painting, measuring 110 feet wide and 65 feet high, had been shown at the Paris Salon and reportedly cost $80,000.


By the time the restaurant was completed The New York Times reported that “Approximately $4,000,000 has been invested in the ground and building.”


All eight floors of the former hotel had been transformed into the restaurant.  A staff of 750 was hired, including the manager of London’s Hotel Savoy, Henri Pruger, who was lured with a $50,000 salary (the highest salary ever paid to a restaurant manager to date).  A month before opening he told the New York Tribune “Two of the best chefs in Europe have already been brought here by me to see that the culinary part of the restaurant begins operations as it should.”


On December 14, 1909, the eve of the opening, a private dinner was held for 150 invited guests.  A writer for the New York Tribune summed it up with a back-handed compliment.  “The Café de l’Opera is nearly barbaric in its lavishness.”


18,000 electric lights turned “night into day,” according to the New York Tribune.   The writer for The Times perhaps felt the lights were overkill, remarking that “Balustrades and pergolas of black marble in the glare of brilliant lights, statues and sculptures, winged bulls and other fantastic and artistic conceits contribute to the general scheme.”

The Tribune described the main floor as “in Assyrian style, heavy gold and black marble being predominant.  A marble ‘palace of music’ on this floor is a feature.”    The palace of music was said to be modeled after a structure “of the time of Alexander the Great.”    It rose 50 feet and was entirely constructed of black marble.  “The pedestal is formed of one large solid block of marble, on which reclines an immense Assyrian lion,” said The Times.  “Bronze figures ornament the steps, and from the temple runs pergolas to the balconies, which are supported by Assyrian columns of black marble, the capitals being double griffins taken from casts of originals.”


A 22-foot wide staircase rose to the second floor, modeled after the great staircase of Persepolis.  It consisted of “broad but shallow steps, surmounting each other in perfect alignment and without apparent support, lending a mystifying aspect,” said The Times.


Along the staircase was a series of bronze Assyrian lions; each one supporting a flickering flame.   Along the balcony of the second floor eight life-sized bronze statues stared down on the diners.  From the third balcony hung what was reported to be the largest silk rug in existence, hand-embroidered in Assyria.


To facilitate the movement of waiters between all eight floors, escalators were installed—a highly forward-thinking innovation.  Miles of pneumatic tubes connected all sections of the restaurant.   Electric buttons at each table enable the guests to summon their steward or chef.


Perhaps an ominous sign of things to come, as the private dinner was coming to a close an employee threw a cigarette butt onto a pile of straw on the still-unfinished fourth floor.  The straw leapt into flames which, luckily, the restaurant staff extinguished quickly, limiting damage.


The Times noted that “the few guests remaining occupied themselves with looking at the unusual spectacle of firemen armed with axes and poles, marching through the gorgeous rooms.”


It seemed that everything that Erkins and Murray planned for the building was done to excess.   To direct the orchestra, which played from a balcony on the roof of the temple of music, the former concertmeister to the Emperor Franz Joseph was hired.  On the second floor an entire Japanese temple—the Temple of Nikko—was constructed.  In it were an embroidered peacock screen that took 18 years to complete and cost $8,000; a 10-foot bronze statue and a bronze “sacred” fountain.


Describing the Café de l’Opera meant using superlatives:  the restaurant contained the largest single carpet ever laid, the kitchen range was 60 feet wide, one million sheets of gold leaf were used in the decorations, and on the Japanese level 10 miles of wisteria twined and 5,000 chrysanthemum blooms lined the walls.  There were 200,000 pieces of silverware, 60,000 glasses, 250,000 pieces of linen and 100,000 pieces of china.


Two weeks after the opening the restaurant dazzled New York with its New Year’s Eve celebration.  “An aerial ballet, consisting of twenty women, descended from the dome of the restaurant at midnight,” reported The New York Tribune the following day.  Every table was booked and admission was by ticket only.


A month later the Grill Room was opened, adorned with mural paintings and an enormous panoramic scene of the Havana harbor.


To sustain its image as a high-class establishment, patrons were required to wear evening clothes.   Even for Edwardian New York, the stringent dress code was too much.    The lavish Babylonian surroundings were apparently not worth the bother for most patrons and the restaurant failed.  And it failed quickly.


Less than six months after opening the grand bubble burst.  On July 28, 1910 The New York Tribune reported on the auction of the furnishings.  “Everything goes at the Café de l’Opera,” said the auctioneer.  The list of items to be sold included linens, furniture, mirrors, silverware, china, glassware, paintings, draperies, Oriental rugs, carpets and even plumbing and electrical fixtures.


“Besides these,” said the newspaper, “more than fifty refrigerators, some as large as a good sized house, are going under the hammer.  Marble slabs, chandeliers and washstands are other things which may be had at the auction at a reasonable figure.”


Two months later restaurateur, Louis Martin, announced he would reopen the restaurant with substantial changes.   He reported that he intended to move the kitchens from the top floors to the basement, to ensure hot food arrived at the tables, to install a 75-foot bar on the main floor, and to have restaurant-owned taxicabs for the use of the patrons.


Very importantly, he intended to do away with the evening dress rule.  “My business,” he told reporters, is to serve the public and not to dictate its clothes.  That can safely be left to the people of New York to solve independently of any interference.”


Martin commissioned architect Henry Pelton to renovate the restaurant, reusing whatever interior elements had survived.   “The furnishings will be entirely of Circassian walnut, for which logs are now being collected and matched,” said The New York Times.  “Pictures to go behind the bar will cost $50,000.”


The restaurant pened as Café Louis Martin in December 1909.   Martin booked the dance sensations Irene and Vernon Castle as on-staff entertainment.  Here they invented dance steps like the Castle Walk. 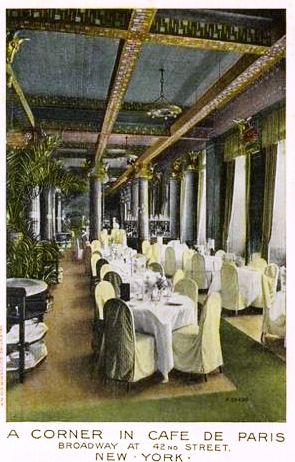 Despite everything, however, the restaurant plodded along only until February 1913 when Martin withdrew from the business.   The restaurant was taken over by the Times Square Hotel Company, which renamed it the Café de Paris.  But the restaurant’s reputation could not be overcome.

The Café de Paris was put into receivers’ hands in January 1914.  The Sun reported that “The 1 o’clock closing order and the idea persisting from its first opening that only those in evening clothes were welcome are given as reasons for the failure.”  The fact that wealthy patrons including William K. Vanderbilt and H. C. Phipps had accumulated unpaid tabs that totaled $31,101 did not help the restaurant’s financial stability, either.


On March 7, 1915 The New York Times announced that “Housewreckers are tearing down the old Saranac Hotel, one of the landmarks of Times Square.”


In its place an 11-story office building was constructed, eradicating memory of the short-lived but dazzling restaurant.
Posted by Tom Miller at 2:50 AM