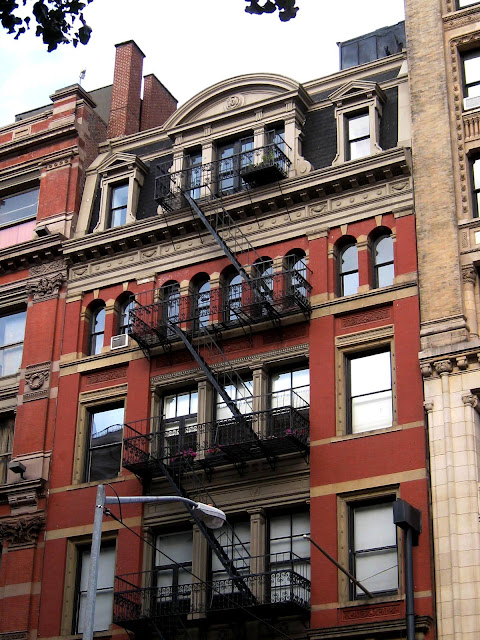 In 1848 Alfred Bridgeman advertised himself as “florist” in the city directories.  His business and nursery occupied two houses at Nos. 876 and 878 Broadway at a time when the area was still filling with fashionable residences of wealthy citizens like the Roosevelts.

By the time of the Civil War he focused less on plants and flowers than on seeds.   Seeds could be harvested at virtually no cost and packets of seeds were easily mailed across the country.    The business grew and in the 1870s Bridgeman brought his son into the firm, changing the name to Alfred Bridgeman & Son.    From the Broadway location the nurserymen did a brisk mail order business, advertising that “All the leading and most desirable kinds of Vegetable and Agricultural seeds, will be found in our Annual Price List; mailed free to all applicants.”

But the neighborhood was quickly changing as the commercial district move steadily northward.  The staid homes of New York’s wealthy were demolished or converted for business.   In 1883 Bridgeman’s nursery was surrounded by high-end emporiums like the magnificent W. & J. Sloane building completed a year earlier on the plot next door to the north.

At the time David S. Hess was among the foremost decorators and furniture dealers in the city.   The developing shopping district along Broadway lured the carriage trade and, subsequently, David Hess.   The decorator leased Bridgeman’s property and in 1883 contracted esteemed architect Henry Fernbach to design a striking building with retail space at ground level and warehouse lofts above. 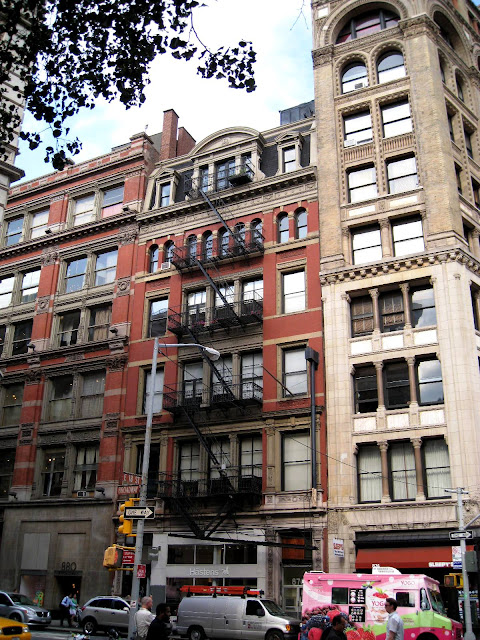 The American Architect and Building News announced the construction plans that year; a “six-story brick store, slate and tin roof, cost $55,000.”  The concise and clinical announcement gave no hint at the structure that would come to be.

Like the Sloane building next door, Fernbach’s building, completed in 1884, oozed taste and class—intended to impress the well-heeled shoppers along Broadway.  Working in brick with brownstone trim, the architect added stone pilasters with carved Renaissance-inspired designs.   With a nod to the furniture designed and manufactured by Hess, the carvings included builder’s tools and drafting equipment.   Leaves of different types of trees suggested the many woods used in the firm’s furniture.

Above it all a slate-tiled mansard roof added a continental touch.  The pediment of the large, central dormer announced D.H.—for David Hess.

D. S. Hess & Co. may have intended to use the entire building; but early on it leased some office space to other concerns.   Shortly after construction was completed Mrs. T. A. Emmet was running the Ladies’ Depository for Giving Employment.  The organization, founded in 1833, sought to help seamstresses sell their wares at full value, without having to deal with unfair clothiers who took most of the profits.

Architect Horace Moran had his office in the building in 1897, a year before D. S. Hess & Co. won the contract for the interior decoration of the new Washington D. C. Post Office.    The Treasury Department gave the $319,400 job to Hess after some negotiations regarding the floor tiles.  Hess’s proposed mosaic floor would have cost $10,500 more than the marble tiling the government settled on.

That same year--just 14 years after completing its Broadway building--D. S. Hess & Co. moved its operation to a new building at No. 421 5th Avenue.  Alfred Bridgeman took over Nos. 876-878 and commissioned architects DeBaud & Mowbray to convert Hess’s cavernous warehouse floors to offices and smaller, more manageable loft spaces.  At the same time one of the impressive stone pilasters at street level was removed and replaced by a cast iron column.

The building filled with a variety of tenants including several carpet merchants.  In 1899 the Worchester Carpet Company and the Jas. & Geo. D. Bromley company announced they had formed “a selling alliance.”  The entrepreneurs came up with the somewhat atypical  idea of sharing showroom space and, therefore, expense.  “Both concerns are independent, except in the association of selling expenses,” said the announcement.

Donchian Brothers, also rug merchants, was here at the same time and would remain in the building for more than two decades.   The showroom was the scene of excitement on July 12, 1900.  On that day  Charles Maguire (who had only been released from Blackwell’s Island a week earlier) casually rode away on the bicycle that George W. Eccles had left on Broadway.  Eccles ran after the thief and briefly caught him; but Maguire escaped.  Soon Patrolman Pantzer joined in the foot pursuit.

Maguire fled into the Donchian Brothers store/  In his panic he rushed onto the glass skylight to the lower level “where he could not move for fear of breaking through the glass,” reported The New York Times. When Officer Pantzer arrived, Maguire calmly explained that he was rug shopping and, turning to a salesman, said he "was not satisfied with the patterns he had seen.”

Police Officer Pantzer took him away.  At the 13th Street Station House it was discovered that Charles Maguire was also known as J. L. Wilson.  And Frank Thompson.  And Thomas Conroy.

Another carpet dealer was in the building at this time.  James Donovan & Company was on the third floor of No. 876 Broadway.  On July 5, 1904 the firm reported to police that “a large number of rugs” were missing.  Later that same day another tenant, the Brookfield Rye Whisky Company, reported it had been robbed of several cases of whisky.

The excitement of the robberies came after an earlier incident at the building.  Assistant janitor Joseph Christie was taken to New York Hospital by Gus Rogers with a broken leg and internal injuries.  Rogers told the doctors that the unconscious Christie had falling from the fourth floor while washing windows.

The police, while investigating the robberies, noticed the broken ladder in the rear yard and decided to dig deeper.  Later some of the missing rugs were found at the home of Christie’s cousin, Martin Marcellus.   All three men, including the still-unconscious Christie, were arrested.

Along with the rug merchants prior to World War I were at least two cosmetics firms.  The factory and laboratory of E. Sharum Mfg. Co., “manufacturers of complexion preparations”  were in the building in 1903.

At the same time, Oxzyn Chemical Company, which made “proprietary medicines,” was here.   One of the company’s best sellers was Oxzyn Balm which promised women better skin.   A 1905 advertisement promised, “The Secret of Beauty lies in a clear, rich and delicately changing complexion.  America’s most beautiful women place Oxzyn Balm above all other preparations because it works delightfully toward sure, scientific results.  It removes imperfections, cleanses and protects and vitalizes the skin with stimulation and pure nourishment.”

The advertisement added one very important quality.  “It is, also, one of the very few preparations that will not cause hair to grow upon the face.”

By now the millinery and apparel industry was encroaching on the neighborhood and in 1906 Leonard Hyams & Brother was here, one of the largest manufacturers of artificial flowers—an essential element of turn-of-the-century ladies’ hats.   That year Hyams took over the business of Kahn & Guerin who had been a competitor.

Bardenheuer Hygienic Underwear Company marketed its unusual clothing articles from the building.  A 1906 ad promised that the “Factum” men’s hose would eradicate foot odors.   The “handsome” socks must have caused many a middle-class shopper to pause, however.  They retailed for about $8.00 per pair by today’s standards.

Other apparel companies here at the time included George Toplitz, manufacturers of ladies’ and men’s clothing and the Simons Company, makers of hosiery.   E. B. Moore & Co. was a distributor of textiles and makers of wool gummed labels and would remain in the building for years.   With the death of King Edward in 1910, Moore was quick to announce that its “All Wool King’s Mourning Cloth is now being shown by the leading manufacturers of Men’s Clothing.”

The Hess Building continued to be popular with rug merchants and in 1909 when a fire broke out in the building on New Year’s Day, it caused about $5,000 worth of damage to the carpet stock of E. Aftandiliantz Brothers.

Haber Brothers, Inc., makers of toys and novelties, leased the second floor in 1913.   Among its line of toys, Engineero was a favorite.   While Haber Brothers was peddling toys, The Ullman Mfg. Co. was selling “Photo-Gelatine” pictures and postcards for hand coloring.  The “ready to paint” pictures included heads, figures, seascapes and landscapes; and came in a handy departmentalized case.  Housewives who had taken art classes could now produce their own greeting cards or gifts at their parlor tables.

The Hess Building was sold at auction on December 6, 1928.  By now the Broadway neighborhood had somewhat changed—although it would never truly become dowdy.   The mid-1930s saw the Phoenix Shade Company selling lampshades on the fourth floor and the cosmetic company City of Paris, Ltd. making toilet powders and perfumes.

The Federal Trade Commission raised an eyebrow in 1937 when it noticed that the printed script “City” on the labels closely imitated that of “Coty.”  On August 16 the City of Paris, Ltd. was forced to discontinue using the word “City” in its corporate name because it caused “customers to believe its products are those of a competitor, Les Parfums Coty,” the Commission announced.

For years Bengor Products shipped its novelties from the building.   In 1942 it advertised MacArthur Buttons in red, white and blue in Billboard Magazine.  “Buy 100 or 1,000,000 immediate delivery,” the ad guaranteed.  For a quarter the customer would receive 100 of the patriotic buttons.

In 2005 the building was converted to residences above the first floor.  Although the entranceways have been modernized, the exquisite stone piers at street level still remain (other than the one lost in 1898, of course).  An unfortunate early 20th century iron fire escape detracts from the overall design; but the handsome building meant to showcase one of the country’s foremost interior decorators and furniture makers survives astonishingly intact.

non-credited photographs taken by the author
Posted by Tom Miller at 3:28 AM