During the first decades of the 19th century Aaron Burr purchased land from Samuel Jones.   It was part of the former Herring Estate and was located just north of north of Burr’s elegant country home, Richmond Hill.   The little hamlet of Greenwich was rapidly developing, most likely prompting Burr’s speculative purchase.

Tiny little Cherry Lane ran through Burr’s property.  Only two blocks long, it made an abrupt turn that gave it a nearly bishop’s crook shape.   With the explosion of population in the 1820s following the yellow fever epidemic, Cherry Lane became Commerce Street; a name very much at odds with the street’s quiet residential atmosphere.

Bogert apparently leased the home almost immediately.   The small house would not have served a large family well—there was one large room on the ground floor and two rooms on the second floor, one large and one small.  There would be space, if necessary for another person in the dormered attic.

Yet one large family did live here at least for two years.  When Richard Israel Decker's wife, the former Mary Erickson, died in 1833 he was left to raise two daughters.  A cooper by trade, soon after his wife's death he married neighbor Euphemia "Effie" Cloyd Hart, a widow 23 years older than he.  By 1859 the new family--including Effie's grown children and their spouses--lived in the crowded little brick house and stayed until at least 1861.

While New York City did what it does best—change—sleepy little Commerce Street remained almost totally intact.  On February 6, 1910 The New York Times reported on a sale of property and made note that “It is seldom that Commerce Street, one of the shortest of the old Greenwich Village thoroughfares, appears in the real estate transfers.  Most of the houses there retain the old-fashioned characteristics of half a century or more ago, and are interesting survivals of Greenwich Village’s more aristocratic residential days.”

Indeed, it appears that when anyone purchased No. 17 Commerce Street throughout the 19th century, they stayed.   Then on July 16, 1920 Charles H. Hall sold the house to the Williams-Dexter Company, which sold it to Mrs. Elizabeth S. Forrest the following year.  Mrs. Forrest asserted that she would occupy the house “after alterations.”

Whatever alterations Elizabeth Forrest did, they did not affect the charm nor the architecture of the structure.

Playwright Katharine Thatcher Clugston was living here in 1929 when she wrote and staged her three-act play, Headlines. 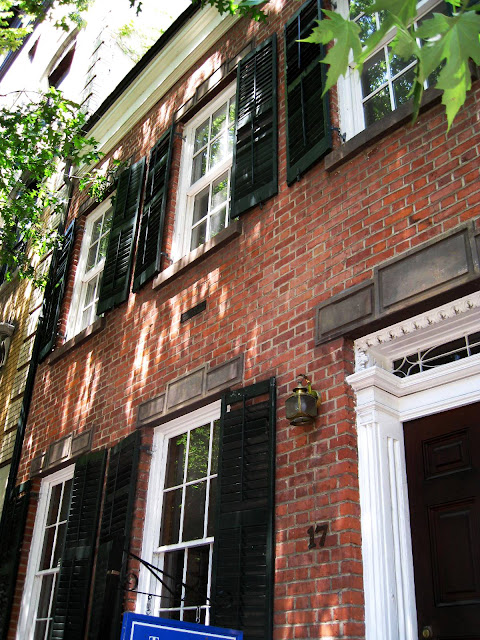 As the little house reached its one hundred year mark its historic and architectural significance was evident.  When Talbot F. Hamlin, Librarian of the Columbia University School of Architecture wrote a length New York Times article explaining architectural trends throughout the City’s history, he turned to No. 17 Commerce to exemplify the Federal Style (although getting the construction date wrong by a decade).

“The New York small house of the Eighteen Twenties, reflecting the late colonial of Federal type of architecture, is typified by a house at 17 Commerce Street.  It was constructed along conservative lines with a very shallow plan.”

Illustrator Tomi Ungerer purchased the house in May of 1960 and, like all of the preceding owners, used it as a single family home.  The intimate size of the No. 17 Commerce no doubt ensured its survival—it is simply unworkable as apartments or even a boarding house. 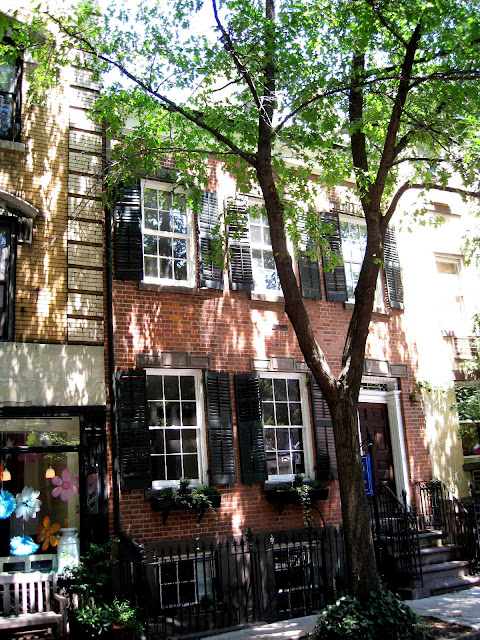 The charming little house that Abraham R. Bogert built in 1830 for additional income was put on the market in 2012.  Doubtlessly the stonecutter would be staggered by the $4.475 million price tag.   The historic and architectural significance of the nearly 200-year old hidden gem, however, is priceless.

photographs taken by the author
many thanks to Holly Tooker for her research regarding the Decker family connection
Posted by Tom Miller at 2:07 AM