The Superb Cast Iron Address Plaques at No. 144 5th Avenue

During the Civil War 5th Avenue below 23rd Street was still a dignified residential neighborhood of broad brownstone mansions.   Among them was No. 144, a four-story Italianate home above a high English basement.  Like its neighbors, it had a wide brownstone stoop to the right that led to the parlor floor.


But times change, especially in New York City, and by the mid-1870s more and more wealthy homeowners fled the encroaching commercialism of lower Fifth Avenue.  The elegant residences were either razed or craftily converted for business purposes.


In 1877 No. 144 was one of the first in the immediate neighborhood to be converted.   The stoop was removed and a street level retail space was created where the English basement had been.  At the second floor cast iron pilasters were installed to facilitate wide showroom windows.     The architect bothered himself with less reconstruction on each succeeding floor, until the upper two floors were barely touched at all—including the handsome bracketed cornice.

While the overall renovation was somewhat slap-dash, resulting in a questionable architectural patchwork; at what was now the third floor the architect added a remarkable touch.   Flanked by two not-so-interesting cast iron pilasters, the three windows at this level retained their egg-and-dart brownstone framing.   Between them two marvelous cast iron panels were inserted that announce the address.   To the south, in whimsical 1870s lettering is ONE HUNDRED FORTY FOUR; and to the north in a matching shield, FIFTH AVENUE NEW YORK.   Most likely they were originally painted in multiple, contrasting colors.  Design-wise they were up-to-the-minute and defied the formality of a generation earlier. 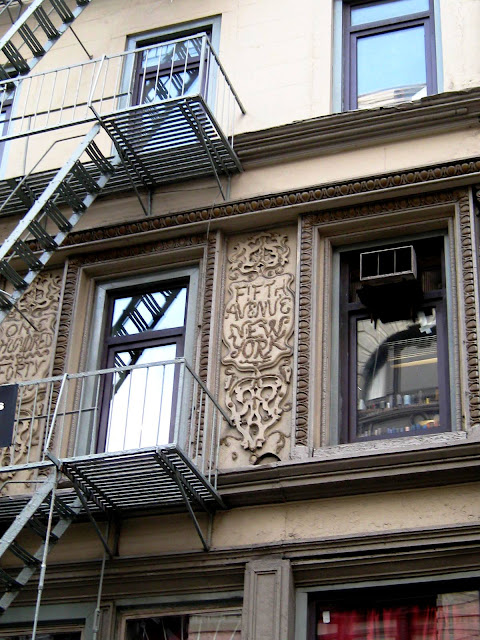 The commercial interests that elbowed their way onto lower Fifth Avenue paid deference to the upscale tradition of the area.    Stores that opened in the 1870s were high-end and respectable.  And so it was with No. 144.


On March 1, 1877 The New York Times reported on the opening of Cottier & Co., an exclusive interior decorating firm and art gallery owned by Daniel Cottier and James S. Ingles..    The shop had been the scene of a reception the night before, where the reporter had seen “all sorts of beautiful stuffs for household decoration, stained glass, furniture and bric-a-brac.”  But he was most taken with the artwork.


A gallery was located to the rear of the first floor where a large landscape painting by Daubigny hung.   There was also a work by Corot depicting Orpheus which the writer deemed “probably the largest picture he ever painted.”  Other artists represented in the room were Rousseau, Millet, Boks and DeBeck.


“Altogether, this little collection ought to be a kind of revelation to the lovers of pictures and to artists; there is hardly a canvas that is not worth a patient and loving study.”  The Times critic predicted that Messrs. Cottier’s paintings “are likely to be of the highest order of art.”


A year later Cottier & Co. held a large sale of paintings that prompted The Times to say “It is by all odds the finest collection of modern masters ever brought together in this country.  It is no little thing to have a firm in New-York which exhibits so much taste in the selection of pictures as Cottier & Co.”  The writer noted that “the large Corot which represents Orpheus hailing the rising sun is still without a purchaser.”

Later in his article the reporter mused, “Perhaps it is not too much to hope that some public institution will secure the large Corot.”


That did not happen.


Two years later Cottier & Co. joined several other 5th Avenue residents and businessmen in pressing the Board of Estimate to repave 5th Avenue.  Complaining that the most elite of New York streets had been treated “the same as any ordinary street of merely local use or importance,” their letter said “It is paved with an inferior stone-block pavement, which is rough, noisy, uncleanly, harsh and inappropriate for all kinds of travel, and incapable of being rendered suitable by patching or repairing”


Over a decade after opening its showroom at No. 144 5th Avenue, Cottier & Co. retained its sterling reputation.  In 1888 “Illustrated New York:  The Metropolis of To-Day” praised the firm.  “In this age of refinement, wealth, and enterprise, the demands of all classes are more exacting than ever before…A representative and valuable house in the metropolis, actively engaged in every utilitarian branch of artistic work, is that of Messrs. Cottier & Co., whose extensive and elegant art rooms are centrally located at No. 144 Fifth Avenue.”


The guide listed the many categories of decorating items available here, much of it custom-made to order.  “They keep constantly on hand in their extensive art rooms all the latest novelties in the departments of artistic upholsterings, cabinet furniture, bronzes, decorative articles, etc., and a splendid selection of rare imported paintings by the most eminent masters.  They have carefully executed many important commissions for the supply of originally-designed art furniture and rich upholstered goods for many of our wealthy and prominent citizens.”


The book urged that “collectors and others who appreciate the masterpieces of the age should not fail to give this noted New York establishment an early visit.”


On April 5, 1891 the 53-year old Daniel Cottier died.   The New York Times praised his support of young native artists at a time when there was a general indifference to American art.  “Probably no one who has sold foreign pictures in New-York,” said the newspaper, “has helped so many young American artists as he.”  At the same time, however, he was responsible for importing some of the most important old masters into the country.  “Some of the finest Rembrandts owned in the United States are due to his remarkable taste,” the newspaper said.


His remarkable taste did not help the sale of the large Corot “Orpheus,” which still hung in No. 144 5th Avenue after fifteen years.


A year later, in February 1892, “Orpheus” was shipped to Paris to be sold as part of the settlement of Cottier’s estate.  Another large Corot, “Diana” arrived to take its place in the 5th Avenue showroom now run solely by James Ingles.


All the while that Cottier & Co. was selling furniture, bronzes and artworks in the first and second floor, the top two floors remained residential while the third floor was leased as offices.   In December 1897 The New York Branch of the Guild of St. Barnabas for Nurses opened its permanent headquarters here.


The guild was a national organization within the Episcopal Church and had about 300 members in New York.   The office in No. 144 would provide a central registration office for the nurses.  Here, too, nurses were offered services such as help in finding room and board and other.  When members from other cities were in New York they were to drop by “for rest, reception of mail, and as a general information bureau,” as noted in Nursing World that year.


The Outlook reported that “The Guild has secured pleasant rooms at No. 144 Fifth Avenue, New York, which are to be used as club-rooms.  There monthly entertainments of various kinds will be given, and there the business meetings of the Guild will be held.  It is proposed to make the place restful and homelike.  A library and reading-room are also to be provided.”


One of the entertainments, given on April 13, 1899, included two pianists, five soloists and J. Edward Wild “in humorous songs.”  The New York Times noted that “A Chinese quartet was a novel feature.”


Meanwhile, on the top floors was the somewhat eccentric but talented naturalist, artist and author, Ernest Seton-Thompson and his wife.    Thompson was a vice-president of the League of American Sportsmen and secretary of the Audubon Societies for the Protection of Wild Birds and Animals.


Seton-Thompson wrote nature books such as “Wild Animals I Have Known,” “The Trail of the Sandhill Stag,” and “The Biography of a Grizzly,” and executed over 1,000 illustrations for the “Century Dictionary.”  He maintained his residence and studio here.


One problem in tracing the Englishman who had no interest in becoming an American citizen was in keeping his name straight.   By the turn of the century he was calling himself Ernest Thompson Seton, rather than Seton-Thompson, and his illustrations bore the initials E.E.T.S. for Ernest E. T. Seton.


Seton’s studio reflected his decades of natural history work and was filled with deer antlers, animal skins, botanical specimens as well as Persian hangings and Oriental rugs.    The Times described the apartment saying “there is an intangible something in the dwelling that carries one in spirit to the wide stretches of the West, to the uninvaded domain of the wolf and eagle and mountain lion.”

Even the Seton’s dining room doubled as a makeshift exhibition hall with artifacts such as swords lining the walls.

Although Thompson-Seton professed to be a naturalist and lobbied for protection of certain species, he found himself in extremely hot water in 1902 with a Colorado Fish and Game Commissioner.    The commissioner sought to have the artist and author extradited to Colorado for his attempt to have “shipped out of the State a number of hides without first securing a shipping permit,” which would have cost $5.00 and for “killing a doe which was milking fawns.”


The hides of mink, bear and doe in question were seized at the office of a taxidermist.  They were packed in a box ready to be shipped to Seton in New York.


By now F. T. Neely marketed his “Neely’s Educational Library No. 2” from No. 144.  The collection was devoted to a panorama of Our New Possessions and contained 128 full page views of “the most interesting persons and events connected with the campaigns in Cuba and Puerto Rico.”  The Inland Educator noted that “Many of the pictures were taken on the field, and the collection is well designed to create realistic impressions.”


By 1910 Cottier & Co. was gone and Berman & Star signed a 10-year lease on the store and basement for about $5,600 a year.  Quickly the upper floors, including the top two where the Setons lived, were taken over by clothing firms.  In 1911 the fourth floor was leased to Huber Kratter & Speigel and the second floor to Samuel Sundberg.


The 10-year lease signed by Berman & Star lasted only four years and in 1914 the store and basement became home to Nathan Ramet, stationer, “for a long term of years,” according to The Sun.    Upstairs small apparel firms like the Fifth Avenue Dress Company and Rudolph & Silberstein still filled the loft spaces.


By the middle of the 20th century any hint that No. 144 5th Avenue had once housed one of the city’s most exclusive decorating and art firms was long gone.  But there, three floors above the sidewalk, the remarkable cast iron street address plaques still remained.


As the century drew to a close, in the street level space where Cottier & Co. sold Victorian cabinetry and masterpieces by Rembrandt and Corot, The Fifth Avenue Epicure opened; a deli-type restaurant serving what it calls “fresh, honest food.”


Other than the ground floor and an unsightly fire escape that mars the facade, the converted house at No. 144 5th Avenue looks much as it did in 1877.   Yet even the surviving top-most floors do not rescue the building from being at best unexceptional. 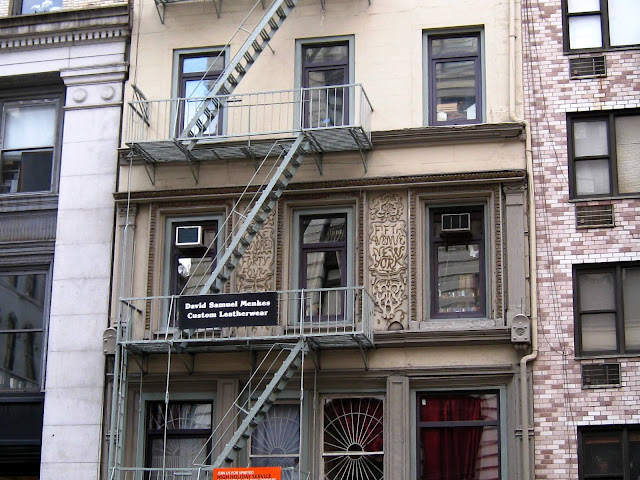 But if the structure is unexceptional, the astounding cast iron plaques at the third floor certainly are.  Completely overlooked by nearly everyone who passes by, they are among the most unique architectural metalwork in the city—superb examples of Victorian taste and design trends in the 1870s.
non-credited photographs taken by the author.
Posted by Tom Miller at 3:10 AM