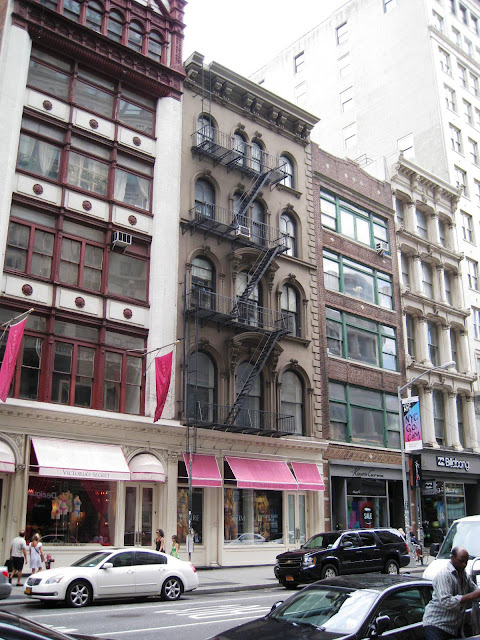 Broadway between Prince Street and West Houston Street in 1860 was not the neighborhood it was a generation earlier.  Commercial buildings replaced the fashionable residences that had lined the thoroughfare for two decades.  But Broadway retained its high-end reputation, as reflected in the upscale businesses.


In 1860 two striking five-story marble buildings were erected at Nos. 591 and 593 Broadway.   Reflecting the taste in residential architecture at the time, they featured arched windows with handsome foliate keystones at the second and third floors.     The center windows were capped by robust arched pediments supported by scrolled brackets.  At the fourth and fifth floors the center windows were replaced by smaller, paired windows.  Above it all was a restrained, bracketed cornice.


It was a time when a piano was expected in the parlor of any well-cultivated and respectable family.  Keyboard lessons for young girls were often considered as important as needlework instruction.


The area became home to several piano and organ merchants.  At No. 596 was the showroom of Mason & Hamlin Organ Co. where handsome ”cabinet organs” graced the show windows.    Hall & Son’s Music Store at No. 543 sold piano fortes, cabinet organs and melodeons manufactured by Sherwin & Herbert ; and Chickering & Sons piano fortes were shown at No. 694.


T. S. Berry moved into No. 593.  The firm’s high-end showrooms boasted a variety of instruments: piano fortes, grand pianos, parlor grands and square grands, parlor organs and melodeons.  The company would be here for years, selling instruments made by other firms, like Hallet, Davis Company, as well as its own “choral organs,” manufactured under the names Berry & Thompson and A. E. Thompson.

Competition was keen among the musical instrument sellers and Berry promised, in an 1865 advertisement, “great bargains…sold on monthly payments.”   Customers could also find deals on second-hand pianos “at $60, $150 to $300” or they could lease the instruments.


Berry promised “A liberal discount made to Clergymen or Sabbath Schools” who purchased a reed organ.

In the meantime, further downtown, D. Morley decided to give up his long-established antique furniture business.  He sold the business in 1865 to an employee, Obadiah L. Sypher and a partner, H. R. Treadwell, who renamed it Sypher & Co.  The new owners moved the highly-respected store to No. 593 that year.


While T. S. Berry sold parlor instruments from the ground floor showrooms, Sypher & Co. served the carriage trade from upper floors.   The New York Times said of Syphyer, “He has been a large importer of [antiques] for some of the wealthiest and most fashionable families of New York, and some of his importations of reproductions of famous works in the palaces of Europe brought large prices.”

As the Civil War ended and the city’s wealthy moved further uptown, the upscale businesses followed.  Broadway slowly became the center of the dry goods and millinery trades.   In 1878 Sypher & Co. relocated to No. 739 Broadway, the same year that T. S. Berry left No. 593.


By now the Metropolitan Hotel had replaced the smaller buildings on the opposite side of the block.   As early as 1872 the high-end men’s furnishings importers and manufacturers, Topham, Weld & Co. was doing business from No. 593.  The firm dealt in “tie silks,” and were the sole agents for “Puchene Kid Gloves and Reveil Dogskin Gloves.”


Similarly, George Sloane ran his silk and satin importing company here until building his own building at 32nd Street and Broadway in 1879.  The fourth floor housed Meltsner Brothers, dealers in feathers for the millinery manufacturers, and Weld, Coburn & Wilckens made scarves and suspenders here.  “They are the best made,” guaranteed the firm’s advertisements.


Around 10:00 pm on the night of June 1, 1891 fire broke out in Meltsner Brother’s loft.  Before it was extinguished $2,750 worth of damage was inflicted on Meltsner’s business as well as S. Schlesinger downstairs and Weld, Colburn & Wilckens.


Weld, Colburn & Wilckens had moved into the building in the mid-1880s and would stay well into the 1890s.  Among the employees here was John A. Bradley.  The head of the manufacturing department, he had been with the company for ten years when he and his wife Caroline left for vacation in June 1891.  (Mrs. Bradley had been an employee of the company when John was first hired.)


While the couple was enjoying their vacation, management was looking closely at Bradley’s expenses.  $2000 worth of vouchers were discovered for purchases that had apparently never been made.  When the Bradleys returned on June 27 they discovered that their bank accounts had been attached.  John Bradley, according to The Sun, “expressed great surprise at the news.”


Around this time the ground floor of No. 593 was updated.   A cast iron façade supported by fluted pilasters at the sides framed a slightly-projecting show window.  A door to the retail space at the southern end was balanced by an entrance to the upper floors on the opposite side.


That year Joseph Schultz & Co., makers of hats, moved in.   Joseph Schultz’s business was successful enough for him to afford a home at 77 West 85th Street.  It was there in 1913 that the 66-year old committed suicide in the bathroom by opening the gas jets.


Apparel and millinery firms continued to fill the building.  In 1907 Leumann, Boesch & Weingart, a Switzerland-based embroidery company marketed its “Lily-White Semi-Finished Embroidered Corset-Covers” here.  The New York Tribune assured that it was “an article which is admired by women.”


The ground floor and basement were taken by J. Sinsheimer & Sons, manufacturers of hosiery and underwear, on February 1, 1907.   Joseph Sinsheimer not only established his sewing rooms here, but ran a wholesale business from the store level.  The maker paid an annual rent of $7,500 for the expansive space.  But trouble was on the horizon.


After Sinsheimer had been doing business here for five years, the Public Service Commission began construction of the subway, a portion of which would run directly in front of No. 593 Broadway.  In March 1912, as part of the street excavation, a sidewalk bridge was erected which blocked the sunlight from the store windows.  The structure remained in place from March 1912 until December 1913.


“Before the operations in question,” read the court documents, “the light entering plaintiff’s premises was sufficient to enable business to be done therein during the spring and summer months until 4 o’clock in the afternoon, without artificial light.”


Now, Sinsheimer complained, he had to keep lamps lit in the store all day long and “the light was insufficient to properly show goods to customers within the store.”  In order for “the color and texture of the goods to be discerned,” he had to take them onto the sidewalk.


Apparel firms, like Simon Goodman’s men’s tailoring establishment, continued on in No. 593 throughout the first half of the 20th century.    After a period of neglect, the SoHo district was rediscovered and in 1993 No. 593 became home to the Museum for African American Art.


Established in 1976 by the artist and art historian Dr. Samella Lewis and others, the museum’s goal was to “to increase public awareness of and support for the artistic expression of African Americans and other African descendant people.”   The museum stayed on here until 2002.


Today—in what would be a shock to the Victorian customers—posters of scantily clad models grace the windows of a Victoria’s Secret store in the space where T. S. Berry sold parlor organs.

non-credited photographs taken by the author
Posted by Tom Miller at 3:09 AM