On October 25, 1900 Leah Sonneborn inherited a four-story brownstone house at 117 East 69th Street. Two years later she sold it to Paul Tuckerman and his wife.

The wealthy couple lived in Tuxedo, New York where they were socially prominent. Tuckerman, a Harvard graduate, commuted daily to his office at 32 Cedar Street. His other interests – he would sit on the Board of Directors of the New York Life Insurance Company, was a Trustee of the Metropolitan Museum of Art and a member of the National Association for the Study and Prevention of Tuberculosis—made having a city house extremely attractive.

At the turn of the century, the staid brownstone residence they purchased was unquestionably out of date – especially for someone like the forward-thinking Mrs. Paul Tuckerman who shocked proper society in 1901 by discarding her side saddle and riding astride a horse.  The New York Times remarked on the scandalous disregard of propriety saying “She takes her daily ride through the park clad in a costume combining the skirt and trousers, a coat fitting close in the back, and a derby hat, presenting a decidedly mannish appearance.”

The Victorian house was demolished and in its place architects Hoppin & Koen produced a restrained neo-Georgian residence that oozed dignity and refinement. Completed in 1903 the structure cost $25,000, its red brick façade trimmed in white stone. The recessed doorway was accessed through an elegant entrance, supported by two free-standing columns above a flight of four stone steps.

The architects sat the building back from the property line just far enough to provide a dramatic forecourt to the side of the steps, protected by a tall, wrought iron fence. 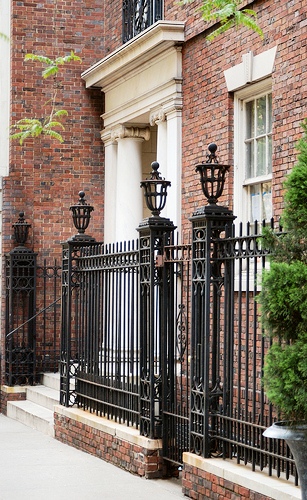 The Tuckermans divided their time between Tuxedo and East 69th Street, rubbing shoulders with the elite of both communities, including Roosevelts, Morgans, Hamiltons and Lorillards. Among the 400 guests at Dorothy Tuckerman’s debutante ball at Sherry’s in 1907 were Mr. and Mrs. F. D. Roosevelt, Henry Sloane and Mr. and Mrs. W. E. Dodge.

Always one to keep up with the times, a year earlier Paul Tuckerman had purchased a new Rainier touring car, described as a “35 horse-power machine.”

By 1922 composer and conductor Ernest Trow Carter and his wife Laura were living here. The accomplished Carter had begun his musical studies at the age of 7 and had so far been organist and choirmaster at the American Church in Berlin from 1897 to 1898, and choirmaster and lecturer at Princeton University for a year before moving to New York in 1901.

While living here Carter composed his best-known work, the three-act comic opera “The Blonde Donna” as well as the tragic one-act opera “The White Bird” about a deformed and wrongly-jealous husband who causes a friend to shoot his wife; mistaking her white neck scarf for a bird.

While he lived here Carter not only composed and conducted; but he fired off volleys of letters to the editors of various newspapers on any number of topics. The wrote urging the approval of 2.75% beer during Prohibition (it was proved unable to cause inebriation, he stressed), provided alternate uses of discarded Christmas trees to extend the joy they provided children, and suggested that the Metropolitan Opera adopt an earlier closing time.

“In Germany,” he wrote, “those of us who have to get up early and work hard can attend opera two or three times a week without a sense of dissipation…usually the boxes at the Metropolitan are pretty well emptied before the last act is over.”

Following the Carters, No. 117 was home to Beekman Winthrop. The retired banker had been former Secretary to William H. Taft, was Assistant in both the Department of the Navy and the Treasury, and was the former Governor of Puerto Rico. The quite impressive Beekman Winthrop died on November 10, 1940 while living here.

For twenty-five years the house was headquarters of the New York State Pharmaceutical Association. In 1952 the group purchased the property and initiated extensive renovations resulting in offices and lecture rooms, a library and a caretaker’s apartment.

Then in 1977 puppeteer Jim Henson purchased the house for $600,000, creating The Muppet Workshop with renovations by architect Peter Strauss. The first floor and basement levels were converted for “puppet assembly” spaces. Here writers created the stories for beloved characters like Miss Piggy and Kermit, while other Muppets were born in the basement.

After Henson’s death, his estate sold the building for $12.4 million in 2005. Three years later Warner Music Group CEO Edgar Bronfman Jr. purchased it for $28.5 million, planning a three-year renovation.
Unfortunately, Bronfman’s plans changed when he began spending the majority of his time in England and the house at No. 117 E. 69th Street sat, for the most part, gutted to the bare brick walls.

In February 2011 Bronfman put the house, along with its amazing past, on the market for $28 million, selling it a month later for $23 million to the editor of The Daily, Jesse Angelo.  Angelo is currently renovating the structure.
Posted by Tom Miller at 3:00 AM