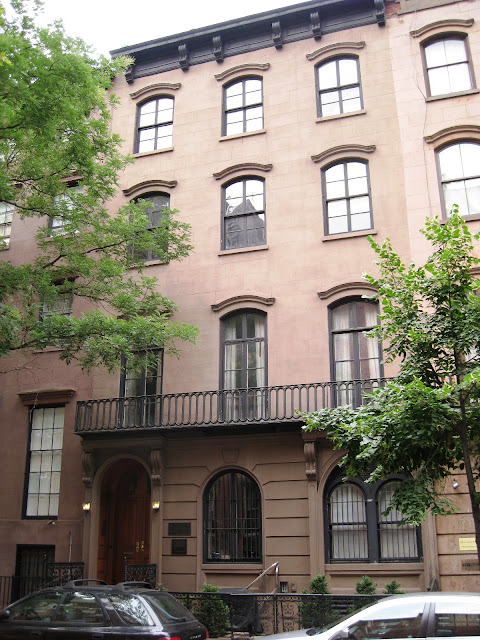 General Winfield Scott, known as “Old Fuss and Feathers,” had become such a national hero after the Mexican-American War that the United States Whig Party snubbed the incumbent President, Millard Filmore, in 1852, and nominated Scott to run in the presidential election instead.

While Scott was on the election trail, match manufacturer Charles Partridge was busy constructing a dignified, matching pair of row houses on West 12th Street just off fashionable Washington Square. As with many successful businessmen of the period, Partridge was building these houses as an investment as the population and wealth of Manhattan burgeoned.

The brownstone-faced houses at Nos. 24 and 28 were begun in 1851 and completed a year later. Four stories tall, they were designed in the latest Anglo-Italianate style with a rusticated first floor.  They were accessed by a shallow set of steps in sharp contrast to the high stoops over English basements that were becoming synonymous with brownstone dwellings. Gently arched brownstone eyebrows capped each of the upper story windows and an arched, open passageway between the two homes lead to two small houses to the rear of the properties. 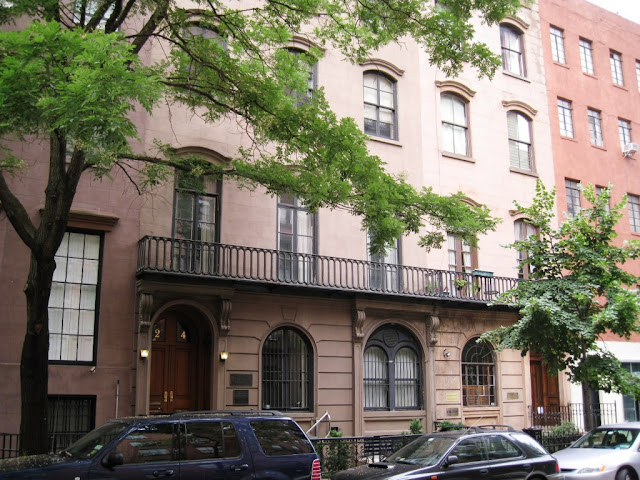 With the election over, General Scott relocated to New York City and, on April 10, 1853, he purchased No. 24 from Partridge and his wife, Sophronia. The bill of sale listed the price as $26,000 and the buyer as “A General in the Army of the United States.”

According to William Smith Pelletreau in his 1909 book “Early New York Houses,” “…here the famous warrior entertained the most famous men of the nation.”

The General and his wife enjoyed their lives at No. 24 for only eight years. As Pelletreau recounted, “His quiet residence here was interrupted by the outbreak of the civil war, during which his time was mostly spent in Washington.”

The Scotts rented their furnished home, most likely expecting to return. During the summer of 1861 Mrs. Emily Megrath, recently separated from her husband, stayed here with her young daughter Emily. The following year Dr. Julis Homberger, a specialist in “diseases of the eye,” took up residency and received his patients here.

In the meantime, the wealthy merchant William T. Blodgett was collecting art and becoming well-known among the community of artists and collectors. By 1872 he was selected to serve on the first Executive Committee of the newly-formed Metropolitan Museum of Art which, so far, was without a building.

Blodgett was adamant about the Met’s collection being “strong” in the Dutch and Flemish schools and early in 1871 he had jumped at the opportunity to purchase Old Masters as the Franco-Prussian War broke out.  Blodgett purchased 174 Flemish and Dutch masters from European galleries “at their cost,” notwithstanding that the museum had no place to house them.

The paintings, which The New York Times said were “purchased so unwisely” further prompted the building of the Metropolitan Museum of Art building.

Blodgett died in November of 1875, the bulk of his estate, including the Newport mansion, going to his wife Abby Blake Blodgett. Within a year Mrs. Blodgett had nearly 100 paintings from her husband’s private collection auctioned – including not only old European works, but masterpieces of “modern” artists like Frederick Church.

In 1886 Mrs. Blodgett purchased the Scott house and just prior to her taking possession an auction of the furnishings was held by the Scott estate. Apparently the Scott family took the best pieces beforehand because The New York Times reported that “The buyers were principally dealers in second-hand furniture and bargain seekers. Nothing appeared to have any historic value or value as a relic.”

Abby Blodgett lived in No. 24 with her two children, Eleanor and William Jr. Her annual income of around $7500 from her husband’s estate afford her the ability entertain fashionably and conduct her many charities.

She was active in the work of the Manhattan East Side Mission, worked for improved education and hygienic conditions in Cuba, and pushed for enhanced work conditions for women. Not only was the virtuous Mrs. Blodgett President of the Bible and Fruit Mission, she presided over the Summer Rest Society whose purpose was “To provide rest and country air to self-supporting gentlewomen, who cannot afford the prices demanded at comfortable health resorts, and are in need, during the summer months, of complete change and relaxation, after the winter toil and fatigue in the City.”

As the 20th Century dawned, Abby Blodgett began a slow decline.  In May 1904 her son was forced to sue several New York rare book dealers to regain the $250,000 in manuscripts his mother had purchased. In a testimony that was assuredly embarrassing to the family, three experts – Alfred Lauterbach, E. T. Greaves and Dr. Joseph Wheelwright – proclaimed Abby Blake Blodgett incompetent.


A month after the hearing, on July 7, Abby Blodgett died in her summer house, Brooklands, in Fishkill, New York.  The New York Times lamented that her death “deprived our city of one of its most loyal, assiduous, and efficient benefactors.”

In May, 1908, Eleanor Blodgett – who would become the godmother of Franklin D. Roosevelt – sold No. 24 to “an unnamed benefactor of the Ladies’ Christian Union, which maintains several houses as homes for self-supporting women.”

The Times reported that “The Twelfth Street house will be altered and devoted to this use.” It was a fitting transition for the charitable Abby Blodgett’s home.

The Ladies’ Christian Union named the house “The Rosemary;” a boarding house “with home-like appointments” the aims of which were “to promote the temporal, moral and religious welfare of self-supporting young women.”  In 1942 the house was altered to accommodate 27 furnished rooms.

The mansion continued to be used for outreach when it became Odyssey House in the second half of the 20th Century. The organization worked with runaway teenagers and counseled female prostitutes.

The interior rooms were ripped out and replaced with offices and seminar rooms.

The Baroness Mariuccia Zerilli-Marimo purchased the Scott Mansion in 1988 as a gift to New York University; a memorial to her husband, Guido Zerilli-Marimo.  Architect David Helpern was commissioned to renovate the structure, which he said was in “a state of partial demolition and total disrepair.”

A two-year renovation was completed in November 1990 and the house became Casa Italiana Zerilli-Marimo, home to the Department Italian Studies.  Because of the needs of the Department, a restoration of the interiors was impossible. The exterior, however, which was listed on the National Register of Historic Places in 1973, was preserved.

The pair of Italianate brownstone residences at Nos. 24 and 28 West 12th Street are, as the Landmarks Preservation Commission, “one of the most distinguished examples of street architecture of the period.”   And as William Smith Pelletreau wrote of the house shortly after Abby Blodgett's death, “so long as it remains it will be a most interesting land mark as the residence of a man who enlarged his country’s boundaries, and has left an immortal fame.”

non-credited photographs taken by the author
Posted by Tom Miller at 3:15 AM