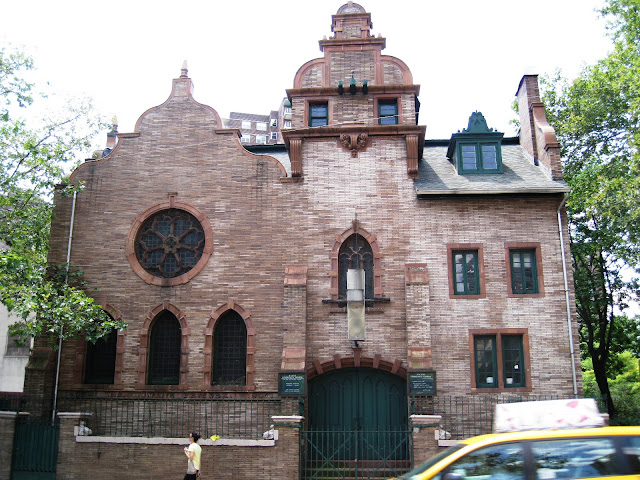 By the second decade of the 19th Century Clement Moore’s family estate, Chelsea, had been criss-crossed with streets and avenues and portioned into plots of building sites. Above 23rd Street the developing neighborhood was called Chelsea Manor; a refined name for a gritty area.

In 1854 Mr. R. G. Pardee deemed it "a destitute field, the most neglected of any upon the island.” Twenty years later The New York Times would reminisce “How many inducements were held out to seduce the young to sin and misery. Vice sought no rest, but adapted itself to the characters of those whose destruction was sought. There were low dance-houses, gambling dens, drinking saloons, and palaces of infamy in their midst, whose emissaries were to be found on almost every street corner.”

Pardee had already established a reputation for his work in Sunday schools (or "Sabbath schools") and in the winter of 1854 he appealed to the Madison Square Presbyterian Church to establish a mission in the forsaken Chelsea Manor area.

A committee report supported Pardee’s petition and the upper floor of an old building at 9th Avenue and 25th Street was acquired and given the lofty name “Manor Hall.”  Madison Square Presbyterian, with help from South Reformed Dutch Church, dedicated the new school on Sunday, April 8, 1855 with its first class of 14 students.

The old building, which had settled an alarming several inches, was in bad shape.  But because it was the only available space and the $6 per month rent was affordable, it had to suffice.

On the ground floor was a saloon, gambling house and bowling alley. One of the school officials would later remember that the proprietor, named Butter, was “a stalwart, black-haired, black-eyed, rough man” and “was also the keeper of a sort of house of refuge for all sorts of bad men – burglars, bank-robbers, counterfeiters, and thieves. Here they fled for protection from the officers of the law; besides, on week days and nights our hall was used for pugilistic performances, dog fights, rat baits, low dances, etc.”

Butter however, “finally became a fast friend of the mission.”

Somehow the righteous work of the Sunday school teachers and the lesser exploits of the men below coexisted for decades.

The school subsisted on contributions from individuals and various religious institutions; however it was generally agreed among the officials not to ally the school with any single church.

By 1866, however, the offers from the South Reformed Church to adopt the mission and take over its financial worries, as well as to build a new chapel, were too much for the little school to ignore. On November 25 of that year the Manor Mission became an arm of the Reformed Church.

In the meantime, the school and mission had grown. The first year there were 80 children attending, the second year it rose to 145, then to 180, and in the fourth year it reached 200. Starting in 1857 regular monthly concerts were held.

The growth of the mission and the dilapidated condition of Manor Hall prompted the church to erect a new facility.  In 1873 land was acquired at 348 West 26th Street and a year later, on November 8, 1874, the charming new chapel and mission were dedicated.

Drawing on its Dutch roots, the church had its new building designed in a Flemish Revival style with S scrolls and curved-stepped gables. Rich brown terra cotta set off the beige brick of the multi-purpose building. The chapel was 25 by 100 feet, there were two large classrooms, infant rooms, a library and an apartment for a janitor. The building, costing $25,000, was totally paid for when completed. $20,000 had come from the South Reformed Church with the balance being covered by a fund raising fair. The South Reformed Sabbath School children paid for the three chapel windows with their own donations. 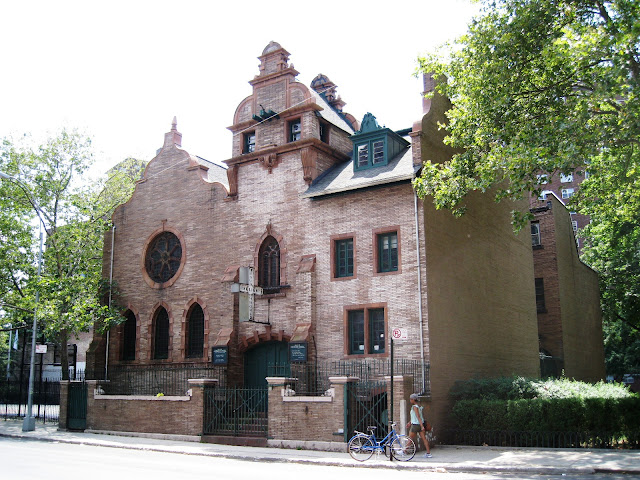 A rather optimistic New York Times acclaimed “The ‘Chelsea Manor’ district, in which the mission is situated, is largely German, and in years past was known as the most wicked and abandoned in the City, and the dedication of a handsome chapel to the worship of God in its midst will be hailed with gratitude by all interested in the progress of evangelization.”

By 1880 there were 1000 pupils at the school and in 1891 Scribner’s Magazine noted “The Manor Chapel Boys’ Club, at No. 348 West Twenty-sixth Street, has an average attendance of about fifty boys a night, and would have as many more if its rooms were larger.”

In 1914 the South Reform Church disbanded and the Manor Chapel and Mission was taken over by the Classis of New York – the governing body of pastors and elders of the Reformed churches.  Two years later the Classis purchased the property for $35,000.

The chapel was renamed Manor Reformed Church by the time the building held its Diamond Jubilee in 1931.

In 1961 construction of an enormous apartment complex of 10 buildings was initiated by the International Ladies’ Garment Workers Union, designed by Herman Jessor. Blocks of Victorian-era buildings from 9th Avenue to 8th Avenue, from 24th Street to 30th Street were demolished for the new structures and parks.

Manor Community Church continues to survive, its charming and picturesque structure mostly overlooked as it sits quietly tucked away on West 26th Street.

photographs taken by the author
Posted by Tom Miller at 2:47 AM