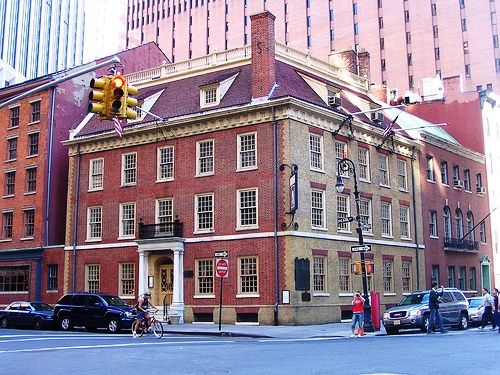 In 1904 George Washington Glintenkamp was born in a room above a barroom on the corner of Pearl and Broad Streets.  The boy’s father was a German immigrant who, along with Mr. Precht, operated the tavern and rented the rooms upstairs.
The little rooms were home to, mostly, longshoremen who had lived here for years.  Patsy McGovern, for instance, a longshoreman on the East River for the Pennsylvania Railroad, had lived here for 36 years – the only home he had ever known in America.  But little George Washington Glitenkamp and Patsey McGovern were about to lose their homes.
The saloon run by Glitenkamp and Precht was Fraunces Tavern; an unrecognizable survivor from Colonial times that had recently caught the attention of the Sons of the Revolution.  It had been the site of George Washington’s farewell speech to his troops and was now being considered for restoration as a museum.
Stephan Delancey was one of New York’s most influential and wealthy citizens in the early 18th Century.  Born in France as Etienne Delancy, the Huguenot fled his homeland under persecution by the French Catholics, landing in New York in 1686 and almost immediately changing his name to Stephen.
A year after Delancey married Ann Van Cortlandt in 1699, her father gave the couple the land at 54 Pearl Street as a wedding gift.   The lot was irregularly shaped and the Minutes of the Common Council of New York on April 14, 1719 noted “Mr. de Lancey applies for a small strip of land to make his lot more regular in shape, as he is now going to build a large brick house, etc.”
Later that summer Delancy began construction of the large, elegant home.  The Delancey’s would have ten children in the house; only five of whom would survive infancy.  By 1730 the family was living in a new house on Broadway and their Pearl Street home was being used for public purposes.
In 1737 dancing master Henry Holt advertised a ball to be given “in Mr. de Lancey’s house.”  In 1739, for two shillings admission, one could enjoy pantomime entertainments given in “Holt’s Long Room.”
Stephen Delancey died in 1741 and James Delancey inherited the house.  He would become Chief Justice, Lieutenant Governor and Acting Governor of New York.   Sometime around 1750 it became home to Colonel Beverly Robinson and doubled as the warehouse for merchant firm Delancey Robinson & Co.  Here in 1756 George Washington stayed as Robinson's guest before returning to the Indian Wars.

Two years after James died in 1760  the Delancey family sold 54 Pearl Street at auction.
Samuel Fraunces, a Frenchman born in the West Indies, purchased it for 2000 pounds, signing the deed on January 15, 1762.  Fraunces converted  the house into the “Queen Charlotte” or the “Queen’s Head Tavern.”
One of the most popular meeting spots in Colonial New York, there were meeting rooms and sleeping rooms on the upper floors.  A document by Samuel Fraunces, dated 1776, described the building at the time of the signing of the Declaration of Independence as he attempted to sell it.  “The Queen’s Head Tavern is three stories high, with a tile and lead roof, has fourteen fireplaces, a most  excellent large kitchen, fine dry cellars, with good and convenient offices, etc.”
Shortly after purchasing the building Samuel Fraunces would become notable as steward to General George Washington. The tavern, too, was gaining importance in the revolutionary cause.  In March 1764 an assembly was called “at the Queen’s Head Tavern” for those merchants who were united against the recent governmental action.
It was here in 1768 that the New York State Chamber of Commerce was founded and continued to meet until it secured a room of its own in February 1769.
On August 23, 1775, the tavern wall was penetrated by a shot from the British warship “Asia.”  A year later, with the British occupying New York on September 21, 1776 a fire broke out in the Fighting Cocks Tavern near Whitehall Slip.  Before morning nearly 25 percent of the city was in ruins; however Samuel Fraunces’ tavern escaped destruction.
In the dark cellar below the tavern four brick cells were outfitted with iron chains for the detention of prisoners.
With the end of the war, Governor Clinton hosted a series of glittering receptions in honor of the commander-in-chief in what was now called Fraunces Tavern.  Here, on December 4, 1783, Washington assembled the officers of the Continental Army in the “long room” upstairs and bid them an emotional farewell.   It was a scene dramatically recreated by William Makepeace Thackeray in his 1859 novel "The Virginians."
The new government, based in New York, leased the tavern for offices of the Departments of War, the Treasury and Foreign Affairs.   Later, as the capitol moved to Philadelphia in 1790 the building reverted to a tavern.
A devastating fire nearly destroyed the building in 1854; the roof was burned through and on the Pearl Street side the walls fell outward, just above the second story.  The building was reconstructed as a contemporary Victorian structure, adding two floors and erasing any noticeable architectural evidence of its early 18th Century origins.
It was the Daughters of the American Revolution who first noticed Fraunces Tavern.  In 1894, headed by Mrs. Fay Peirce, the group took tea in the “Long Room.”
Later, a member would note in the Daughters of the American Revolution Magazine,  “So great, in fact, was the interest and enthusiasm excited, that it was believed a Chapter committee would at once be appointed and charged with the duty of taking steps for the rescue of the ancient and famous hostelry from its present deplorable uses as a cheap tavern and ‘long shoreman’ restaurant and saloon.’”
Not until 1897 did the group actually move on the project, writing to Mayor Hewitt with a long list of suggestions.  Included in their want-list were that the entire block on which the tavern stood be purchased with public money, that the building be moved to the opposite corner of the block and restored, that the rest of the block be planted as a park, that two uniformed soldiers mount guard there (in Colonial uniforms), that the Long Room be outfitted with portraits of Washington and other officers, that the rest of the building be made into a museum, and twenty-five cents admission be charged, and that an equestrian statue of Washington be erected where the tavern was standing.
The Daughters of the American Revolution didn’t want much.
Hewitt responded that the land alone would cost the City over $2 million and that such an enormous project, called Patriots Park, would not be covered by the Small Park Law of the City.  But, he promised, he would think about it.
On March 20, 1900, Maurice F. Holahan, as President of the Board of Public Improvement of the City of New York, wrote to the Assembly of the State of New York, pleading for assistance.  He wrote of the “realization of the lamentable fact that the ‘march of improvement’ on Manhattan island has swept away almost every object personally identified with ‘the Father of His Country.”  Fraunces Tavern, it was argued, must be salvaged.


The New York Times, in a July 12, 1901 editorial, cautioned about asking for too much and getting nothing.  “The ladies who have carried the scheme thus far are entitled to the thanks of all of us,” it said, “We trust however, that they will not endanger their cause by asking for too much from the city.” The Times did agree, however, that the tavern should be restored and “enough ground about it to be converted into a Colonial garden.”
In the meantime, there were the longshoremen and the “cheap tavern” to contend with.
The Times admitted that “In the case of many of the longshoremen the changing of the structure into a museum will be literally turning them into the streets, their long years of residence in Fraunces’s Tavern having rendered them almost incapable of considering any other lodging as habitable.”
At a meeting of the tenants, ironically held in the Long Room, Patsy McGovern was vehement.  He reckoned that George Washington “would have never turned a decent man out of his home to make a ‘museum’ of a good, respectable hotel.”
When referring to the Sons of the American Revolution during the meeting, Glintenkam called them “Blisters.”  Explaining himself he said, “I call them Blisters because everything they see seems to stick to them after they have gone away.”
Despite the protests, Fraunces Tavern was purchased by the City and restorations by architect William H. Mercereau began in 1907.   As the top two stories were removed, the original roof line could be plainly seen and the original bricks were identified by the mortar – the colonial mortar containing a great deal of oyster shells while that from the 19th century was lime and sand.  Mercereau matched missing bricks by using 18th century bricks from buildings in Maryland, or importing them from Holland -- where the original bricks had been made.
On December 4, 1907, 124 years to the day after Washington bade his troops farewell here, the restored Fraunces Tavern was dedicated.
Fraunces Tavern quietly continued throughout the 20th century until January 24, 1975 when Puerto Rican nationalists detonated an explosive device in the 19th century annex, killing four people and injuring at least 44 others.
Today the remarkable relic stands in the busy Financial District, looking much as it did with Samuel Fraunces purchased it in 1762 – an extremely rare and important piece of American and New York City history.
Posted by Tom Miller at 3:50 AM