Architects Herbert Spencer Harde and Richard Thomas Short kept themselves busy around the turn of the century designing tenement houses throughout the city.  Harde branched out into real estate at some point, establishing the Eronel Realty Company – “Eronel” being his wife Lenore’s name spelled backwards.
With the Upper West Side rapidly developing, Eronel Realty acquired the plot of land at 350 West 85th Street and, in 1903, commissioned Harde & Short to design an apartment building on the lot – in short, Harde hired himself.
Terra cotta was just making its mark as a remarkably versatile and relatively inexpensive material and the architects embraced it with gusto for this project.   In an effort to lure well-to-do residents from private homes into apartments, Harde & Short lavished the façade with intricate terra cotta ornamentation.  It would be a stark departure from the firm's usual tenement buildings. 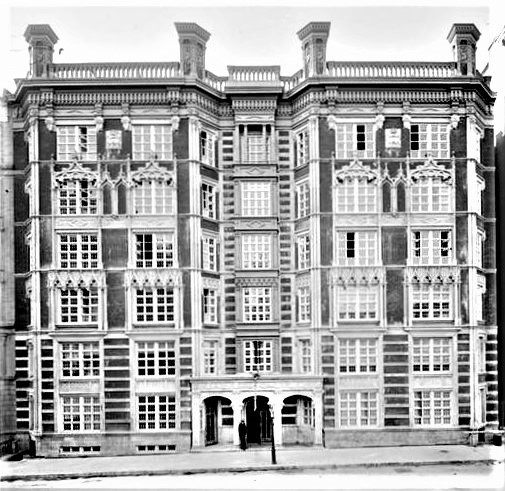 photo by Wurts Bros, from the collection of the Museum of the City of New York
Drawing on several styles and periods, they created an eye-catching and unique structure.  Expanses of multi-paned windows hardened back to great English country estates while dripping Gothic screens coexisted with terra cotta salamanders – the symbol of Francis I.
Harde & Short played the red brick and white terra cotta against one another, creating visual interest that was accentuated by the light and shadow of the façade’s angles and bays.   The distinctive six-story building was completed in 1904, drawing the unexcited comment from The Real Estate Record & Guide which said it was “a departure from the usual.”
Harde named his building “Red House” and immediately moved in with Lenore.  Joining them in the new building were socially-important Mr. and Mrs. William Smith Young and their two daughters, Caroline Grace and Lucy.  The 32-year old attorney was a member of no fewer than five exclusive clubs, including the Columbia Yacht Club and the Cornell Club.
Mrs. Young, who went by the ponderous name Caroline Marshall Page Young was a Daughter of the American Revolution and was active in philanthropic and charitable causes.  On May 14, 1907, for instance, she and Mrs. Franklin P. Duryea, who lived in the elaborate Ansonia Apartments, hosted “a bridge” to aid the School for Crippled Children.
Reflective of the difference between West Side and East Side, many of the tenants here were movers and shakers; unafraid to break the chains of tradition or to question the status-quo.
At this same time. the banker Ashton Parker was living here.  His astonishingly modern views on smoking in public sound more like 2011 than 1905.  Parker complained to the editor of The New York Times, calling public smoking “a nuisance” and “disagreeable to ladies.”
“Why is it that smoking is forbidden in the ladies’ cabin, yet is permitted in the Wall Street ferry house, where the ladies wait for the boats?” he asked.
Other early tenants were Harvard graduate Semour M. Peyser and William Robinson.   The modern-thinking Robinson owned an early motorcycle which, sadly in 1906, caused him to be charged with “overspeeding on a motor bicycle.”  He was released on $100 bail.
Smith College alumna Nancy Elizabeth Barnhart was living here in 1915 when the women’s rights advocate won honorable mention for her submission of a poster design for the Woman Suffrage Campaign Poster Competition exhibited at the gallery of the Society of Beaux Arts Architects.
Not all of the endeavors of the residents were so lofty, unfortunately.   Alexander S. Timson was a 20-year old insurance broker when he lived here in 1911.  On his wedding day, June 10, Detectives arrived at Red House where they arrested Timson as a jewel thief.  When he was searched at the station house, police found two diamond rings set with sapphires, two diamond hatpins also set with sapphires, one diamond ring set with pearls and another diamond ring.
“This is terrible.  I am to be married tonight,” Timson protested.  “My people, who live in this city, are wealthy, and will help me out of this trouble.”
Timson’s people never showed up.
Sadly the rooftop balustrade and aristocratic chimneys have been lost.  Otherwise little has changed on the exterior of Red House.  It appears very much as it did when Lenore and Herbert Harde moved in in 1904 – what the AIA Guide to New York City calls “a romantic six-story masterpiece.”
LaptrinhX.com has no authorization to reuse the content of this blog
Posted by Tom Miller at 3:04 AM