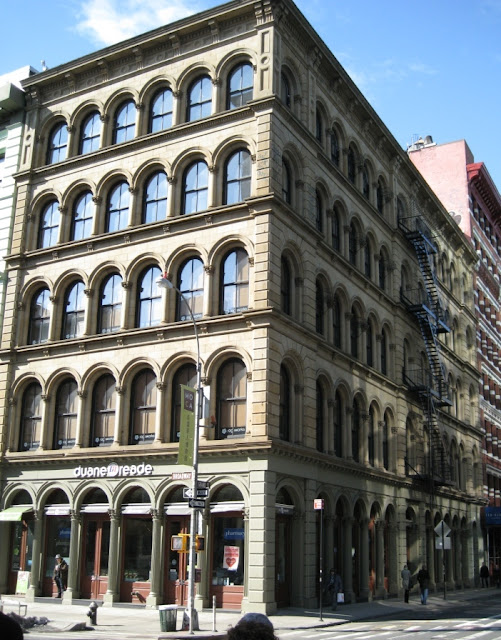 Daniel J. Devlin moved to New York from Louisville, Kentucky just as his brother, Jeremiah, was arriving from Ireland. The two opened a men’s clothing store in 1843, D. & J. Devlin, at the corner of Nassau and John Streets.

Business flourished and in 1854 they moved to an impressive new store on Broadway at Warren Street, changing the name to Devlin & Co. Only four years later the brothers began construction on a sister store at 459 Broadway, at the corner of Grand Street.

Completed in 1861, the five stories building was, as the AIA Guide to New York would later describe it, “A late Italianate temple of commerce whose beautifully weathered stone surfaces are pierced with ranks of finely proportioned rounded windows.” From both stores the Devlins catered to gentlemen and boys alike. An advertisement outlined the three specialized departments:

Samples were sent by mail “upon application, with full directions for ordering garments custom made.”

Shoppers in the store received a scare when, on October 22, 1866, the four-story stone building being constructed next door on Broadway collapsed “producing great fright among the workmen employed in the building, and not a little excitement in the street outside,” reported The New York Times.  The Devlin building, luckily, went unharmed.

The week before Christmas in 1874 the newspaper commented that “The high class and moderate prices of all their goods, no matter in what branch, offer such temptations as to command purchases."

“In fact,” the article went on, “gentlemen and lads can walk into Mssrs. Devlin’s stores, and in five minutes walk out again, arrayed in all the glories of the well-dressed man of the period.” Devlin & Co. remained in the building at No. 459 Broadway until 1879, when they consolidated it with the Warren Street store.

Despite the move, the neighborhood where the building was located was an active commercial area. In his 1882 “New York by Gaslight,” James McCabe Jr. described Broadway north of Canal Street. “The eyes take in the long lines of stately buildings, the constantly moving throngs of pedestrians and vehicles, and the ear is deafened by the steady roar which goes up unceasingly from the streets, for this is one of the busiest parts of Broadway."

For decades apparel and accessories firms were headquartered in the building. In 1892 the Hodgman Rubber Company, manufacturers of “mackintoshes and rubber goods” – in short, rain gear -- was here. A long dry spell that year caused George F. Hodgman to complain that “the weather conditions…have so far not been in our favor. A good general rain for several days would make things lively for us.”

By the turn of the century, Pratt, Hurst Co., Ltd, an English importer of “laces, nets and curtains” had its New York headquarters in the building and three years later the firms of Mannheimer Brothers and S. Fox “dress goods” was here.

The neighborhood retained its integrity as World War I approached, with A. L. Silbertstein’s cutlerly store in the building.

Things would not continue so favorably, however.

By the late 20th Century the SoHo area north of Canal Street had drastically deteriorated. Tawdry electronics shops and discount stores slapped garish signs at street level while the upper floors of the once-grand buildings were reduced to storage or miscellaneous small business. An aluminum storefront obliterated the graceful arched first floor of No. 459 and only the soot-covered upper floors hinted at the building’s former grandeur.

In 2006 application was made to the Landmarks Preservation Commission for restoration of the building. Joseph Pell Lombardi Architects set about recreating the original Broadway and Grand Street arcades, restoring the granite sidewalks and the graceful sandstone façade. Fire escapes, and small rooftop addition and other 20th Century modifications were eliminated. Original cast iron with wood infill was used to replicate the original first floor façade.

The extensive project was completed in 2011, resulting in commercial space on the ground level and residential units above. Jeremiah and Daniel Devlin’s handsome pre-Civil War period emporium has regained its dignity.