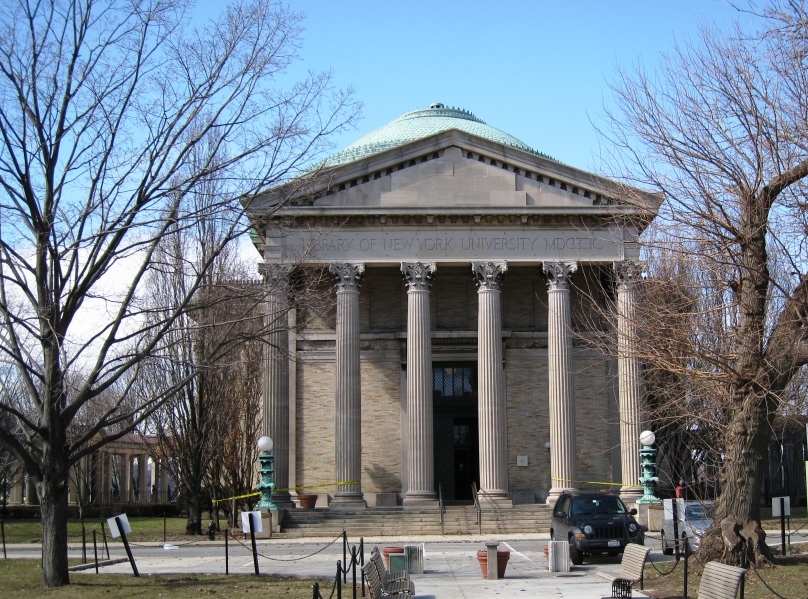 ﻿When financier Jay Gould died in 1892, he not only left his four children a fortune estimated at between $65 and $70 million, he left a legacy of cold-hearted, cut-throat business dealings and sometimes unscrupulous tactics.

While her siblings spent lavishly and enjoyed summers in Newport and the glittering New York social life, Helen Miller Gould lived quietly. She preferred to give generously to charities and other causes in hopes of diluting her father’s tarnished reputation.


Helen Gould attended the New York University School of Law in a program reserved for female students, graduating in 1895. That same year ground was broken for the university’s new library building far uptown where the “rural” branch campus was planned.
An estimated crowd of 5,000 visitors, dignitaries, collegians and alumni attended the event. “Nearly one half of the visitors were women,” said The New York Times, “many of them young and charming, and all distinguished and attractively garbed.”  In his remarks, the university’s Chancellor Henry McCracken gave only a hint at the benefactor who donated the building. “The special gift of this occasion is by a citizen whose name is withheld, but who has carefully studied our situation,” he said.
Chancellor McCracken was the driving force behind the University Heights campus. At a time when Columbia University planned to abandon its downtown campus for an airy, open space uptown, McCracken envisioned the University Heights campus with its striking views of the Harlem River as a necessary complementary facility.
McCracken commissioned Stanford White to design the initial buildings, including the library which was to be the focal point of the campus. White drew on Rome’s ancient Pantheon for inspiration. Using beige brick and limestone, he designed what the New York Landmarks Commission called “Classical dignity and monumental grandeur.”


Inside, White melded the Pantheon’s refined architecture with Renaissance pizzazz. Tiffany Studios produced the stained glass, the metalwork, painting and the gilding of the elaborate Corinthian capitals of the sixteen two-story Connemara Irish green marble columns.  In the central reading room, under theTiffany glass oculus of the dome, a glass-block section of the floor, encircled by a Greek-key bronze frame, allowed light into the chapel below.The green marble columns, the gold-toned coffered dome, the multi-colored stained glass and mosaics blended into a lush symphony of color.
Two years after ground-breaking, The Times updated its readers on the progress. “In the midst of the rolling country of Upper New York, where only sections have as yet taken on a semi-city appearance and nearly all is still a practical park, the New York University is slowly rising.”  The article described the rising library “with its towering Greek dome. In general the lines of the Parthenon [sic] have been chosen for this building, though the interior of the circular reading room has been modeled on the Reading Room of the British Museum; in fact, it is to be a close copy of it.”


White designed the three main academic buildings connected by a classical colonnade, The Hall of Fame with its bronze busts of great Americans, as an ensemble. Helen Gould supplemented her original gift of $250,000 for the library with $68,000 in 1899 to cover additional expenses. It was all, still, kept secret.
On December 8 of that year Chancellor MacCracken told the press “I am pledged not to reveal the name of the donor ‘till the building is erected. This will probably not be ‘till next Summer.”
﻿﻿
﻿﻿ Helen Miller Gould’s generous gift was eventually made public and the library became known as the Gould Memorial Library. In tribute to the murdered White, memorial bronze doors to the architect were designed by his son, Lawrence, featuring eight reliefs designed by White’s colleagues.

As the 20th Century progressed and the university expanded, the library not only became too small, but it no longer met building codes which allowed only 75 persons in the upper floors.  The building sat unused.


During an anti-war rally in 1969, a Molotov Cocktail was tossed into the auditorium (formerly the chapel) below the central reading room.  The Tiffany panels in the rear were blown out, the glass floor collapsed and hot air that blasted forth shattered he stained glass within the dome.  The auditorium was totally gutted.
By the time the City University of New York acquired the campus in 1973, the Gould Memorial Library was empty and neglected.  On upper floors, which were essentially derelict, the plaster and paint was falling away from walls.  In 2007 Carolyn Williams, then Bronx Community College President, lamented that “we have beautiful facades, great looking buildings, but once you walk inside you will see that they are truly neglected and in need of a great deal of repair—not just renovation, costly restoration.” 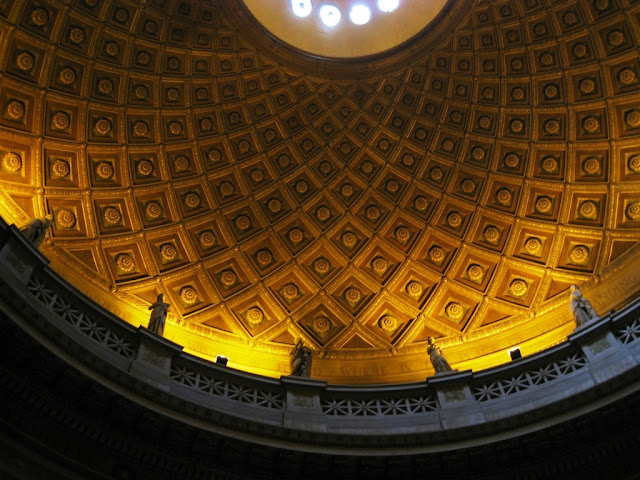 In 1996 the Bronx Borough President’s office and the City Council provided $1.4 million for the restoration of the roof and the basement auditorium.  A grant from the Getty Trust in 2004 provided a restoration plan and partial funding, however it severely fell short of the total restoration cost estimated at $50 million.


FaçadeMD headed up a team of conservationists to analyze, restore and repair the windows and ceiling. The intricate, swirling coffered dome and roofs were restored as were the plaster statues ringing the reading room and the Tiffany windows, some of which feature 3-dimensional design.﻿
﻿
The Gould Memorial Library--the building some regard as Stanford White's masterpiece--is coming back to life.  The restored auditorium is now a functioning lecture hall and several administrative offices are on the upper floors.

Preservation architect Lisa Easton remarked that “The Gould Memorial Library is one of the most beautiful, pure Renaissance-influenced pieces of architecture and clearly illustrates the ideas of campus planning and the influence of educational planning and architecture at the time.”

non-credited photographs taken by the author
Posted by Tom Miller at 2:41 AM