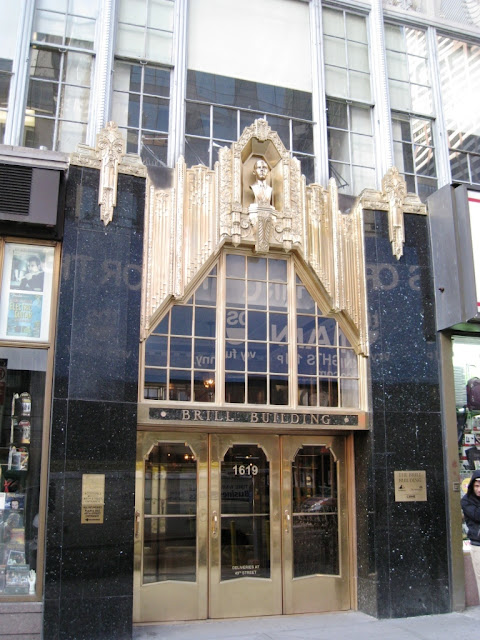 Nothing, it seemed, could go wrong for Abraham E. Lefcourt prior to 1930. Born on New York’s Lower East Side, he started business manufacturing ladies’ apparel. In 1910 he built his first building, a 12-story structure at 48-54 West 25th Street that housed his factory on two floors.

In 1914 he created the Alan Realty Company--named after his 2-year old son--and continued building, erecting structures throughout the Midtown area. In 1924 Lefcourt gave his now 12-year old son ownership of a $10 million office building being erected at Madison Avenue and 34th Street. His purpose, he said, was to “inculcate in his son…a sense of thrift and responsibility.”

By 1929 Lefcourt not only commanded a vast real estate empire, but was president of the Lefcourt National Bank & Trust Company. On October 3 of that year he announced that he would build the tallest building in the world at the northwest corner of Broadway and 49th Street – the Lefcourt Building. Exceeding the Chrysler Building by four feet in height, it was to cost an estimated $30 million. Negotiations began for leasing the land from brothers Samuel, Max and Maurice Brill, where their Brill Brothers clothing store stood, and the architect Victor A. Bark, Jr. was commissioned for the project.

Nothing, it seemed, could go wrong for Abraham E. Lefcourt.

Suddenly, however, Lefcourt’s fortunes plummeted. Three weeks after his announcement, the stock market crashed. The plans for the skyscraper were quickly reworked, reducing the structure to a $1 million, 11-story office building.

Tragically, one month after the lease of the site was finalized in January 1930, 17-year old Alan Lefcourt died suddenly of anemia. Coupled with the intense grief caused by his son’s death, Lefcourt was forced to deal with a crumbling empire. In August he resigned his bank presidency to devote more time to his real estate holdings. By the end of the year he had sold no fewer the eight Manhattan buildings and investors brought suit against the bank alleging “improper investments.”

The developer continued to lose millions even as the Lefcourt-Alan Building was completed in 1931. By the fall of that year Lefcourt defaulted on the agreement with the Brill Brothers, who foreclosed. The building which he intended as a monument to his son was renamed the Brill Building.

In November 1932, with a judgment pending against him and his world collapsing, Lefcourt suddenly died. While the official report blamed a heart attack, rumors of suicide persisted. His one-time $100 million fortune was reduced to a few thousand.
Completed in 1931, the striking Art Deco Brill Building remained, in a sense, a memorial to Alan Lefcourt. Above the entrance doors an elaborate niche holds a brass bust of the handsome youth. Another, larger bust, possibly terra cotta, graces façade at the 11th floor. Only the smaller bust is documented as being of Alan (mentioned in Abraham Lefcourt’s obituary in The New York Times as “his son’s bust over the entrance”); however the New York Landmarks Commission feels the evidence suggests the larger bust “too, represents the son, or, perhaps, an idealized male tenant.”
Perhaps more significant than the Brill Building’s striking Art Deco architecture, with its contrasting brass and polished black granite, and terra cotta reliefs, it is subsequent place in American music history.

Early tenants were music publishers, many having roots in Tin Pan Alley. Cab Calloway, Duke Ellington, and Tommy Dorsey had offices here along with their music publishers. 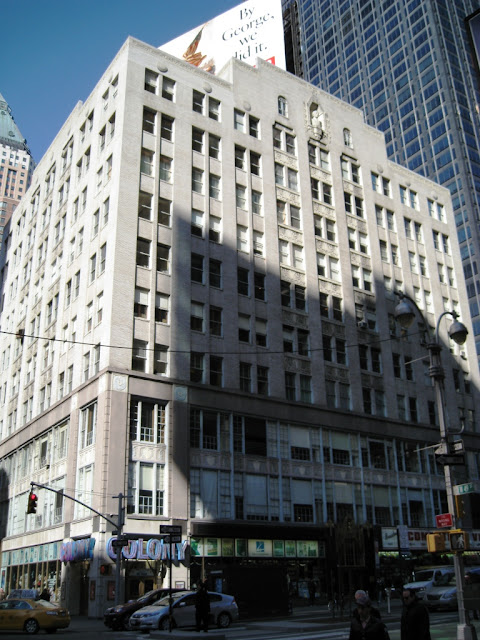 By the 1950’s radio disk jockey Alan Freed and Nat King Cole leased space here. Leiber and Stoller wrote for Elvis Presley here; Red Bird Records, famous for its “girl groups” was on the 9th Floor, and Burt Bacharach and Hal David met here in 1957 after which they wrote over 100 songs together.

Throughout the years the building was home to publishing houses such a Lewis Music, Mills Music and Leo Feist, Inc. and composers Johnny Mercer, Billy Rose, Neil Sedaka and Rose Marie McCoy. By 1962 there were 165 music businesses here.
Initially the entire second floor –approximately 15,000 square feet—housed The Paradise, a cabaret where music for the floorshows was supplied by bands like Glenn Miller and Paul Whiteman.

In the 1960’s the songs for the girl groups and teen idols that emanated from the offices here gave rise to what was called “The Brill Building Sound.” It was, according to Robert Fontenot, “poppier, more laden with strings, more giddy with romantic possibility than some of the earthier R&B stuff…This was, in other words, sophisticated pop for teens in the first blush of love, and it’s precisely that combination of classic songwriting technique and post-rock modernism that helped it get over and kept it fresh and exciting in the years since.”

non-credited photographs were taken by the author
Posted by Tom Miller at 3:18 AM