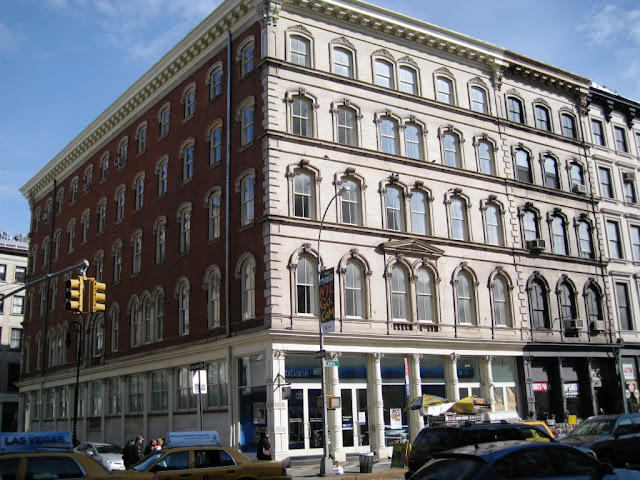 When British-born Aaron Arnold opened his dry goods store on Pine Street in 1825, he began what would become the oldest department store in America. In 1842 James Mansell Constable bought into the business and it became Arnold & Constable, Company; although sometime after the Civil War the ampersand would be replaced by a simple comma – Arnold, Constable & Company

By 1856 not only had the Pine Street store become too small for its impressive trade but the commercial district was moving uptown. Arnold & Contable commissioned a grand new emporium on Canal Street at the corner of Mercer. The façade was clad in white marble, giving it the familiar name “Marble House.” Five stories tall, it was elegantly designed with corner quoins; arched, carved window lentils and a flat roof with a modest cornice. The Mercer Street side mimicked in red brick the design of the Canal Street façade.

The store opened in 1857 boasting a product line offering “Everything from Cradle to Grave.” The company ledgers would list the names of Astors and Vanderbilts, and Mary Todd Lincoln would become an oft-seen shopper. In March 1860 the store advertised the “splendid new silks of the season…The organdies for the coming Summer are gorgeous in bright colors and are large in pattern.”

Later, in August of that year, The New York Times commented on the “beautiful assortment of evening silks. Some of white taffeta, with a shower of tiny golden stars, were very striking. A new silk, and one which will be very much worn, is the striped watered silk,” it said. Indeed, the well-heeled ladies of New York could purchase the latest fashions of Paris in Arnold & Constable’s white marble emporium.

Early that same year on February 22, as the storm clouds of the Civil War gathered in the South, an article appeared in the Atlanta-based Southern Confederacy newspaper. Among the New York stores the paper insisted should be boycotted was “Arnold, Constable & Co.”

“We do this for the reason that we know no Southern merchant will expend the money that he has obtained from Southern slaveholders in building up and enriching a class of men who are stabbing at the vitals of this section,” the paper said.

The boycott did little harm to business and in 1862 a perfectly-matching addition was added to the east.

In May 1869, while Arnold, Constable & Co.’s immense second store was rising uptown on Broadway at 19th Street, three men walked into the Canal Street store at 11:00 am and boldly walked out with an entire display case. The case, filled with $500 worth of goods, was loaded onto a butcher cart waiting at the curb and the thieves casually drove away.

The firm kept Marble House long after the grand opening of the magnificent Broadway store. While the great emporiums like Lord & Taylor were focusinging their retail efforts around Union Square or 6th Avenue, Arnold, Constable & Co. kept the Canal Street store open as an option for its shoppers. As late as 1878 Goulding’s New York City Directory listed both addresses for Constable Dry Goods.

In 1914 the Canal Street store closed and little by little the neighborhood deteriorated from grand stores to tawdry shops peddling electronics, cheap handbags and knock-off perfumes. By the 1960s a patchwork of signs were plastered along street level of the once-elegant Marble House and graffiti was scrawled on its brickwork. The AIA Guide to New York City lamented that “Years of déclassé retailing numb most viewers to the lyrical architecture of this once elegant block-long bazaar.”

Almost everything in New York City is cyclical, however, and in 2005 when the United American Land Company purchased the building, it began considering the possibilities of the former Marble House.

PKSK Architects were brought in to convert the Canal Street entrance to a retail space and to convert the upper floors to rental apartments. The unsightly fire escape was removed and the glazed storefronts and arched bases were restored. The project was completed in 2008.

A year later, architect Sherida Paulsen explained to Margaret O’Donoghue Castillo of the American Institute of Architects “We compared the worn-out facades to an 1855 ad and were stunned to see that the building had changed very little. We removed some ill-conceived storefronts and a fire escape, and restored the architecture. This building could spark a line of rebirths along that busy thoroughfare.”

Indeed, the blocks along Canal Street near the old Arnold, Constable & Co. building are undergoing a renaissance. Ornate cast iron and masonry buildings are re-emerging from under decades of soot, metal and plastic signs, and fake facades. A bank is now housed in the street-level space where Mary Todd Lincoln once shopped.
The New York City Landmarks Commission noted that this remarkable building’s “style, scale, materials, and details are among those features that contribute to the special architectural and historic character of the SoHo-Cast Iron Historic District.”