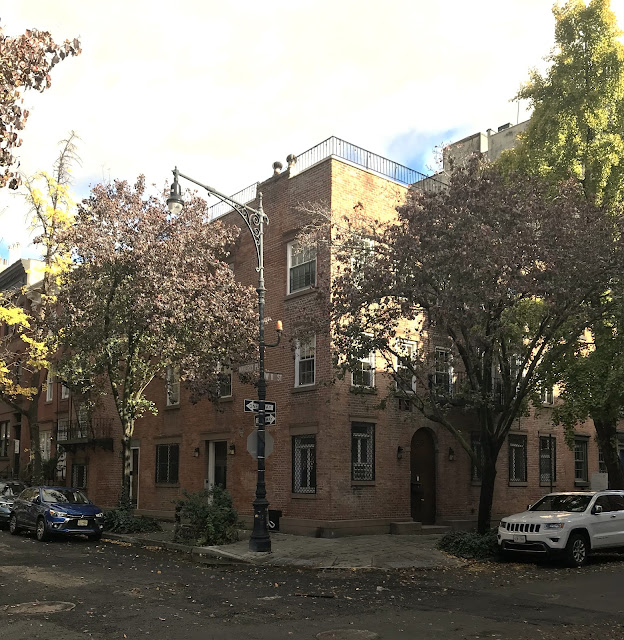 In 1832, carpenter Joseph Low built a Federal style house at 15 Hammond Street, at the northeast corner of Art Street.  (Art Street would be renamed Waverly Place the following year, and Hammond Street would become West 11th Street in 1864.)  Ten years later he erected two abutting homes at 11 and 13 Hammond Street.  Originally, all three must have looked much like the well-preserved 211 West 11th Street.
Low moved his family into the middle house, and leased the others to merchant class families.   The Brush family was listed at 13 Hammond Street simultaneously with the Lows.  In the rear yard was a smaller house, as was common at the time, numbered 13-1/2 Hammond Street.  It is probable that the Brushes rented that rear house.  Dr. John H. Brush was a physician and Charles W. Brush was an attorney.
On June 9, 1846 the Grand National Jubilee of the Sons of Temperance began with a parade.  The following day, The Evening Post reported, "Yesterday afternoon, the family residing in the house No. 13-1/2 Hammond street, went out to see the procession and locked the house up.  During their absence, some rascals broke open the doors and stole a gold watch, diamond breast pin, and jewelry and money, amounting altogether to between $300 and $400."  The "rascals" had made off with the equivalent of more than $14,500 in 2022.
In the meantime, The Warriner family was living in the corner house by 1845.  Towards the rear was a grocery store, entered on Waverly Place, operated by William H. Scofield that year.  By 1851 Henry Kloproth ran the store.
In 1857 Christian Laurits purchased 15 Hammond Street.  He, his wife Mary Catherine, and their son Christopher moved in and took over the operation of the grocery store.  As was common, they took in a boarder.  That year William F. Nisbit lived with the family.  He was associated with the Daniel Badger's Architectural Ironworks at 42 Duane Street.
The Low family had left 13 Hammond Street by 1851, when Stephen Haines Pierson and his wife, the former Sally Ann Wheeler, moved in.  Married in 1820, the couple had seven children, at least two whom, Arthur Tappan and Charles H., were still living with them. 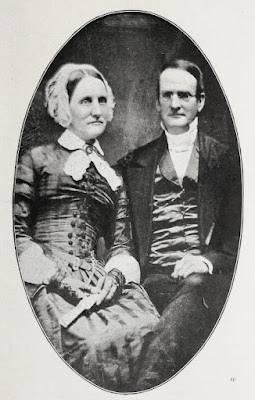 Stephen and Sally Ann Pierson, from Arthur T. Pierson, A Spiritual Warrior, Mighty in the Scriptures, 1912 (copyright expired)
When the couple took possession of the house, Pierson was the "cashier and confidential clerk" of the drygoods firm Alfred Edwards & Co.  It was a highly responsible position.  In September 1854 he changed course, joining Stearns & Marvin.  In announcing his move, he explained that the firm "will manufacture and sell the world renowned 'Wilder's Patent Salamander Safe, with Rich's Improvement.'"
Deeply religious, the Piersons had sent Arthur to the upstate Ossining School.  The Christian boarding school was so exclusive that it accepted only 12 students at any given time.  An advertisement in 1851 noted, "The charges per session, for Tuition, Board, Fuel, Lights and Stationery, are $100, payable in advance.  Pupils are expected to furnish their own fork, spoons and napkins; also, slippers and an umbrella."  Highly involved with the institution, Stephen Pierson was a "referee" of the school.
(Interestingly, Arthur Tappen Pierson would go on to become a prominent Presbyterian minister and Bible expositor.  Following his death, the Pierson Bible College was established in his memory in Seoul, Korea.)
Charles, now working as a teller, was still living with his parents when the family moved out of 13 Hammond Street in 1856.  It was not unusual in the early 19th century for well-do-to families, when moving, to sell everything and simply start over.  On April 17, 1856 an auction of the Pierson furnishings was held at the house.  Among the items were oil paintings, a piano "in excellent order and fine tone, by Tuttle & Hall," parlor furniture consisting of "mahogany carved sofas, divans, ottomans and chairs, in hair cloth," and "mahogany centre and pier tables."
The house became home to Elias A. Day, a director in the Greenwich Insurance Company, and his wife, the former Nancy Coit.  The couple had been married on June 18, 1845, and had two daughters, Hester A. and Amanda.
Hester was married to William D. Gregory and when the family moved into their new home, they had a three-year-old son, Elias Day Gregory.  Tragically, on October 27, 1865 Elias Gregory, now nearly 13 years old died.  His funeral was held in the parlor two days later.
In 1867 the Day family left 213 West 11th Street, selling it to Christian F. Buhler.  Sharing the house was the Buhlers' son, Sheridan, who was a lawyer and real estate operator.  The parlor was the scene of the 65-year-old Christian's funeral eight years later, on May 13, 1875.
The same year there was a funeral next door.  Mary Catherine Laurits died at the age of 57 on February 13.  Following his father's death, Christopher Laurits remained at 215 West 11th Street, running the grocery store, until his death in 1893.  The following year his son, Frederick, sold the property to Robert Beatty for $17,050 (approximately $554,000 in 2022).
In 1912 The Fine Arts Galleries operated from the former Laurits grocery store space, and in 1920 it was home to a Chinese laundry.   It was the scene of a terrifying incident on November 2, 1920.  The New-York Tribune reported, "four gunmen entered the Chinese laundry at 215 West Eleventh Street and ordered Sing Lee and Ching Chum to throw up their hands.  While one of the bandits covered the Chinamen with revolvers, the others rifled their cash register of $100.  They escaped."
Change was about to come to 213 and 215 West 11th Street at the time of the robbery.  The following year the houses were combined.  The first floor became a dancing school, the Noyes School of Rhythm, and the upper floors were converted to rented rooms.  (The Department of Buildings warned, "no more than 2 families cooking at a time.)
In remodeling the combined buildings, the stoops were removed, the brickwork was stuccoed, and a pseudo portico installed at the new entrance at 215.  A brick parapet now guarded the rooftop.  Residents entered on Waverly Place, where the grocery store had been. 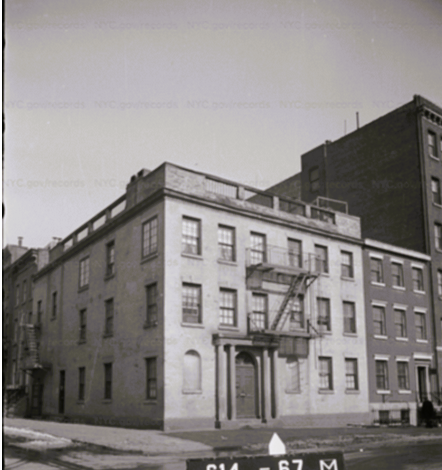 The entrance to the former grocery store can be seen at left.  image from the NYC Dept of Records & Information Services.
The Noyes School of Rhythm had been established by Florence Fleming Noyes in 1912.  It now had branches in Boston, Cleveland, Cincinnati, Minneapolis and Schenectady."  An advertisement for the Noyes School in 1922 touted, "Rhythmic movement brings relaxation--refreshment of mind and body.  It awakens the creative faculties."
At the time, the North Baptist Church had been located a block away for four decades.  In November 1936, the congregation sold its building and purchased 213-215 West 11th Street.  The New York Times wrote, "At the same time, the same broker sold the building at 215 West Eleventh Street to Old North [Church]."
The combined houses were altered to accommodate the church auditorium in the basement level, church offices on the first, and three apartments each on the second and third floors.  One of the apartments was a residence for the minister.
On July 25, 1962, The New York Times reported, "The property of the Old North Baptist church at 215 West Eleventh Street...has been sold to an investor."  The article noted that the church had been dissolved.
The buyers, Robert and Dolores Welber, commissioned Brownstone Renovations, Inc. to give the property a "medieval" make-over.  The portico was removed, a heavy layer of rough stucco was applied, and casement windows installed.  The ground floor became offices while the upper floors contained apartments.  A new entrance was opened on Waverly Place.  More recently, the stucco was removed to expose the brick. 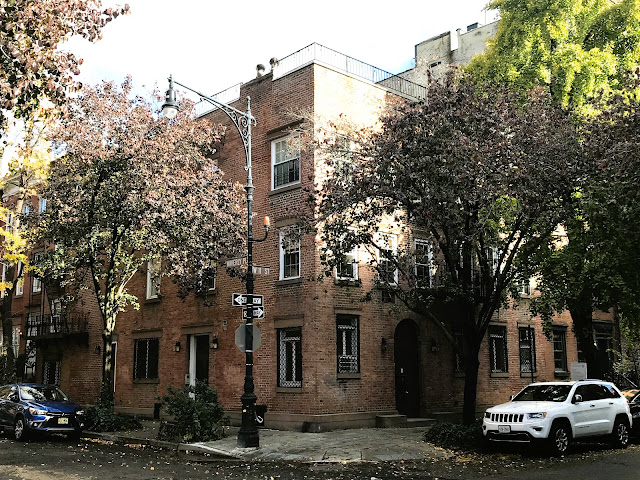